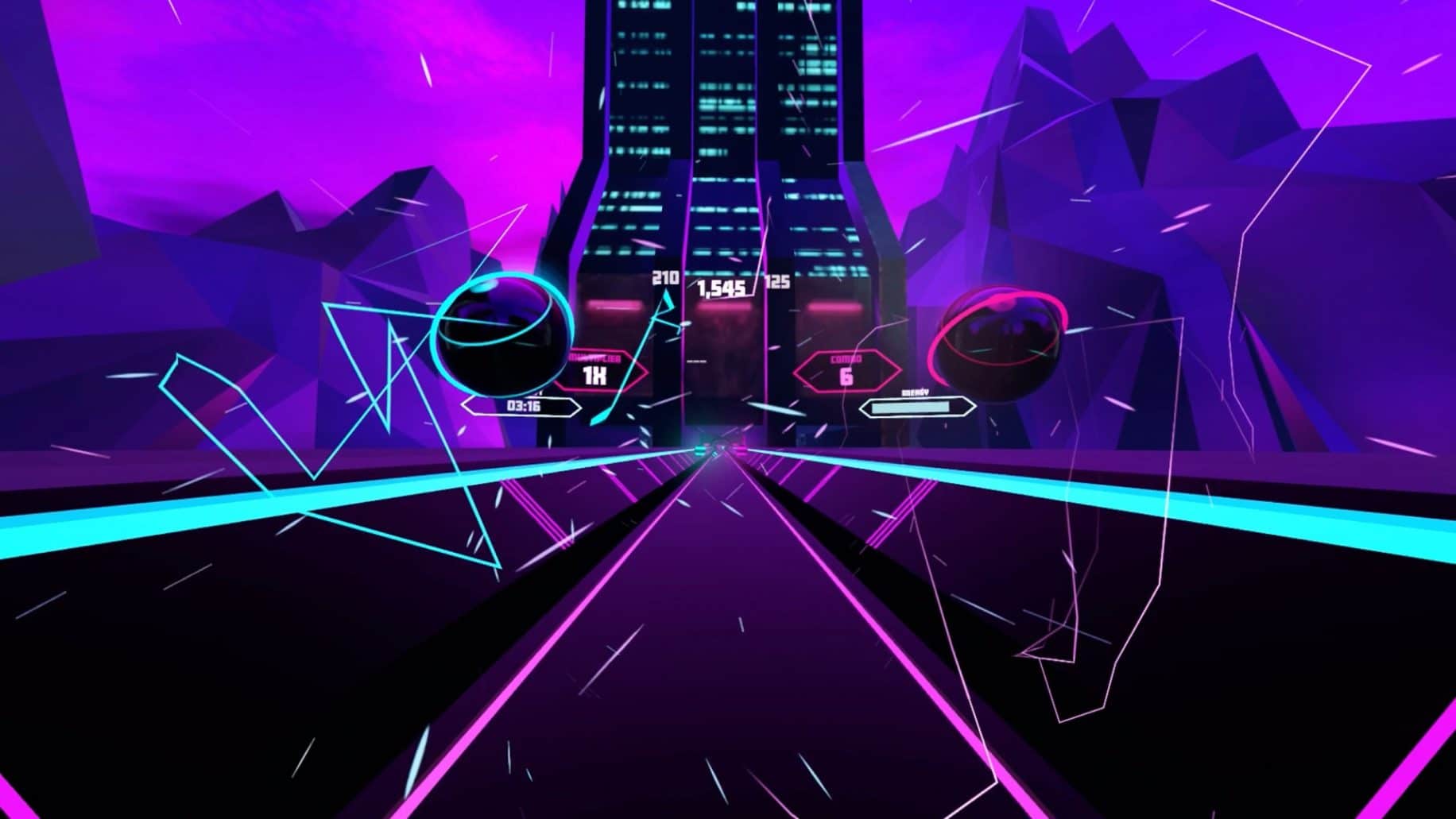 Despite launching just over a month after Beat Saber in 2018, Synth Riders was largely overlooked in terms of popularity than its more famous dance-action counterpart. Even for me, Beat Saber was the reason for buying a Playstation VR and was for a long time the game that justified that entire purchase. Going into Synth Riders then – finally catching up by releasing on PSVR – I couldn’t help but feel a certain sense of it being the lesser of the two titles, despite having not even heard of it until getting my hands on it. I wondered if it was merely a pale imitation of a superior, immensely loved title.

Well, I’m very happy to say, I was completely, and utterly, wrong. Synth Riders is quite simply an awesome time. It captivated me with an excellent, deep and varied selection of songs. Wowed me with its graphical style. Gleefully had me dancing and throwing my hands around with nary a care. While Synth Riders shares a lot of the same design, presentation and general gameplay feel of Beat Saber, it stands tall alongside it as a phenomenal experience in its own right. It’s also given me another reason for being satisfied investing with VR those years ago, despite lacking a couple of features that would have elevated it to the best in its class.

Synth Riders, as a dance-action rhythm title, is purely based on gameplay experience. There’s no story or fluff, you jump right in and get your jam on. There’s a short and handy tutorial which shows you the ropes and the differing modes you can engage with. Then, you’re straight onto the good stuff. For new players to the genre it’ll give you a nice foundation before throwing you into the deep end and there’s also practice mode for every song while you get acquainted.

At launch on PSVR, there’s a selection of 54 songs available straight off the bat, with an additional 25 songs on offer via paid music packs. I had all 79 songs available to try and there’s a good variety of tracks and genres to attract different musical fans. The Synthwave Essentials packs offer the more traditional pop and electro tracks that are engaging and energetic. Coupled with a smattering of rock tracks, cyberpunk focused tunes and even some jazzy, hip swinging blues songs. Put simply, there’s a large offering, even without the paid DLCs (which include bands like The Offspring and Muse).

It was an impressive lineup and amplified one of my favourite parts of dance-action VR games: discovering music I would otherwise have never listened to. There’s some bangers in the roster that had me head bobbing and slaloming all over the place. Consequently, you’ll likely find a good few you’ll have a great time with and that will keep you coming back, or have you repeatedly listening on Spotify.

So what of actually playing said wide variety of tunes? Well, Synth Riders differentiates from Beat Saber… pretty slightly. Little round orbs will float towards you and it’s your job as synthwave dancer extraordinaire to hit them all. Some will come on their own, lots will come at once, in different directions, angles and line ups. There’s the equivalent of skateboarding grinding where you follow a set line of orb until completion and some which are triggered by holding both of your orb-shattering hands together or only using one for a time.

Incredibly, the mapping of hitting orbs to the beat of the song is nigh-on perfect. The heavier rock tunes and more intense, exhilarating synth or cyberpunk songs are designed in such a way to capture the essence of the beat as you desperately try and keep up with the objects you need to hit. I found myself getting into a perfect groove as I deftly threw my hands and arched my body to avoid obstacles and rack up the best combo. On a couple of songs I even marvelled at just how much precise and intricate work must have gone into making the movements so satisfying and perfectly placed to enhance your feel with the song. Put simply, it was awesome and really elevated the merging of gameplay with the sound.

To keep things interesting, there’s a handful of modifiers and other potential modes you can switch to. Spin mode has the orbs and track fly at you either 90 degrees to your right or your left, forcing you to account for new distance and angles. Force mode will rate the power and ferocity of your hits on each orb, increasing the demand to needing strong as well as accurate hits. I spent most of my time in the regular rhythm mode, but they’re worthy additions and add a nice dash of spice when you want to change things up a bit.

A big aspect of dance-rhythm games is their skill ceiling and curve. There’s multiple difficulties, starting on easy and reaching master. Having played a lot of Beat Saber, I was able to get confident at Expert and Master relatively quickly, but for new players the skill gap might be a bit daunting at first, as there’s a bit more to account for in Synth compared to Beat Saber. Even so, the demands on your skill level are worth investing into, as once you can acclimatise to the hardest songs on higher difficulties, you’ll be feeling like a maestro of all things dance. This is the best Disco Stu simulator you’ll probably ever play, basically.

Synth Riders is absolutely a workout on higher difficulties too. It expects a lot more full-body movement than some other rhythm games and it’s all the better for it. The use of obstacles and smaller objects to hit means you’re constantly on the move, so it’ll make for a great workout routine if you’re so inclined. The tracking on the VR was faultless 99% of my playtime, and even the 1% was likely more due to my camera positioning than the game itself. For a game that requires a lot of focus and precision from the player, it has the ideal foundation to prevent those frustrating and infuriating tracking mishaps from occurring.

All of this is to say nothing of the gorgeous graphical presentation. There’s 16 backgrounds in total in Synth Riders, each of them are dynamic and feature moving, stunningly designed backdrops. A couple were so striking I actually found myself distracted the first few times I played them as I couldn’t stop marvelling at the neon lighting, cyberpunk aesthetic or dystopian world around me. Very few, if any, VR games have impressed me graphically, but Synth Riders’ creativity and artistic aesthetics blew me away at points.

Even better are the “experience” songs, of which there were 3 I could play. Effectively, these experiences forgo scoring for a hugely immersive experience which has been individually crafted for the song. The Offspring’s song for example had their symbols and colour palette used to great effect as you smashed through guitar solos while their signature guitar wielding skeletons explode in front of you. Caravan Palace’s experience adds an entirely psychedelic and out-of-this-world atmosphere as you traverse its jazzy notes. They’re true spectacles and really demonstrate the immersive power of VR so I’m hoping we’ll see more of these.

Each song tracks your hitting of notes, with successive hits increasing your combo multiplier and score. The ultimate goal is to “perfect” every song and have your mastery of all things musical action glorified on the leaderboards forever. Each score is tracked per difficulty and modifiers will either increase or decrease your potential score gain based on if they aid or hinder you. It leaves a lot of room for experimenting and perfecting your performance, which will keep the dedicated players around for a long, long time. There’s also developer challenges for songs too, but unfortunately there were none available for me to try currently.

The only real issue I have with Synth Riders is the lack of any structured campaign or challenge mode. Beat Saber had a series of levels which escalated in difficulty and challenged the player by limiting things like movement speed or having requirements for success. It forced me to engage with modifiers and encouraged more skillful play. Synth Riders unfortunately doesn’t have this, which is a shame, because I could see myself spending a lot of time actively playing a mode like this. It’s a minor loss in the grand scheme of the game’s content offering, but it did feel lamentable to not have it to guide me to becoming a better player.

Overall though, Synth Riders is excellent, blistering and an unbelievably good time to play. My scepticism of it being a clone of other dance-rhythm games was blown away immediately and it now confidently perches itself as one of the best VR games around. Whether you’re new to the genre or have played others like it, there’s so much to like about Synth Riders you owe it to yourself to give it a try. Whether you want a workout, a synthey-disco dance or just to look incredibly embarrassing in front of your friends, Synth will provide you with a glorious time.

Despite appearing as a knock-off of other popular dance-rhythm action games, Synth Riders earns its place alongside the cream of the VR crop as an essential PSVR experience. With a wealth of varied and pulsating tunes, hugely enjoyable gameplay mechanics and a stunning visual art direction, it overcomes its minor flaw of a lack of challenge or campaign mode. If you own a PSVR and don’t mind embarrassing yourself as you throw shapes, you absolutely need this in your library.