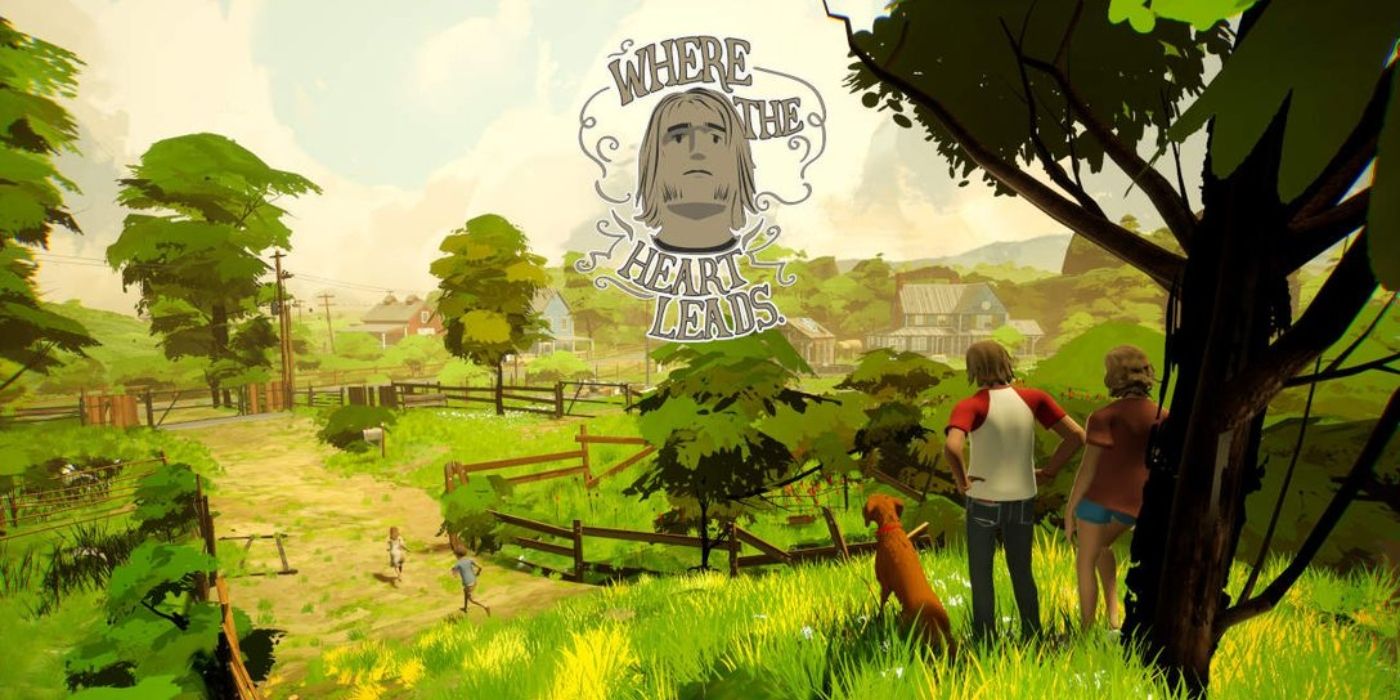 A narrative journey through one man’s life, Where The Heart Leads is an absorbing tale with a few niggling issues. The Finger Guns Review.

A narrative journey through one man’s life, Where The Heart Leads is an absorbing tale with a few niggling issues. The Finger Guns Review.

I’ve read those words countless times over the past decade. Whether it be binary choices down a branching narrative or something deeper, it’s a phrase that implies that there’s depth to a story. So often though, these choices are either heavily signposted as “good vs evil”, leaving little room for nuance, or send the player to the same destinations via a slightly altered journey. Where The Heart Leads, the latest game from ReCore creator Armature, is something a little different. Choices, as inconsequential as they may appear on the surface, do matter here and often not in the way you might think.

Where The Heart Leads follows the life of the lead character called Whit. The game begins on a farm as a storm rages and the ground shakes. Stepping out to investigate, Whit and his family discover a sinkhole on their land. What’s worse is that the family dog has fallen in and is trapped on a ledge. Throwing caution to the wind, Whit cobbles together a makeshift rescue platform from a winch and a bathtub and attempts to rescue the canine from the catastrophe. Things don’t go according to plan and Whit finds himself at the bottom of a massive pit.

Trapped and with nowhere to go, Whit begins to reminisce about his life. Via dreamlike visages, he first thinks of his childhood alongside his free spirited yet troubled brother Sege. He remembers his teen years spent with his childhood sweetheart Rene and his life with his parents on their farm. He reminisces about odd jobs taken around his town and looking for work as a new Dad to his 2 kids. These sections of remembrance form chapters of his life, the decisions taken in which form the basis to the next.

The entirety of Where The Heart Leads plays like a 3D point and click adventure. Parts of the narrative are delivered via cut scene-like conversations in which you have no control over, other than to choose what to say when presented with an option. For the most part though, you get to control Whit from an almost-isometric view as he moves around the self-contained memories. Here he can talk to a cast of recurring characters and take on whatever challenges life throws at him.

Where The Heart Leads does throw a lot of challenges and opportunities at Whit and his family, much of which will be relatable to parents. In the grand scale of gaming narratives, the events these characters go through could be described as low stakes – making enough money to pay the rent, balancing life at home with the kids, supporting family members, overcoming a sudden accident, working out who will be the breadwinner in the family – but it’s surprisingly impactful here. Through some impressive character/world building and clever writing, it’s easy to get attached to the cast and want to do best by them.

This is where the decision making of Where the Heart Leads comes into play. At hundreds of junctures in the game, you’ll have to choose between 2 or more options. Do you keep someone’s secret that could impact the whole family or do you reveal it to those it could affect? Do you let your brother Sege’s creativity run wild or do you try to reign him in? When opportunities arise, do you choose to jump at that chance or do you put your family first? Some of these options have only superficial results while others have far reaching consequences for the future. Whether every character has a happy ending is entirely up to the player and what direction they guide Whit’s life and choices.

It’s also impressive how well pieced together these choices and decisions are. It sometimes matters in which order you talk to characters. Sometimes you’ll have an option to do two things and the order in which you do them effects the dialogue you’ll have later. For example – in Where the Heart Leads’ first chapter, Whit’s mother will ask him to retrieve the post from the mailbox. If you don’t do this and instead talk to other characters, you’ll unlock other dialogue options while missing out on conversations with the mother regarding the post. It’s a game that respects the player’s choices and the order in which they’re made. Considering how many choices you get to make, it’s quite a feat.

While the family based narrative of Where the Heart Leads is the primary story here, there’s a secondary tale which runs throughout. This is primarily represented by the art style. The whole game is given a dreamlike feel. The boundaries to the game play area feel like the end of the world, as if Whit’s memories are bordered by a vast nothingness. Every character other that Whit is presented as a translucent silhouette, as if gazing into another world. Then there’s a reoccurring character that feels out of sync with the rest of the memories. I don’t want to spoil this aspect of the game any more than I already have but this all leads to a heart wrenching if easily anticipated ending.

My main issue with this game is the pacing. There are early chapters of this game that can last up to two hours. They’re deep, involved and are where most of the decisions are made. As the game progresses though, the time gap between chapters grows significantly. Whit and his family becomes much older in a blink of an eye as we pop in and out of his life. The later chapters don’t feel as in depth as those earlier chapters either. It feels like much of the character development falls by the wayside as the game progresses, presenting us with a situation to deal with rather than allowing us to see that situation unfurl as it does in the early game. I originally put this down to an artistic choice based on how time seems to feel much faster as we as humans grow older but this still means that these chapters feel somewhat unfulfilling. It feels like the game could have been balanced a little more in terms of pacing, removing some of the more pedestrian content from the earlier chapters and dedicating more time to seeing the outcomes of the earlier decisions later in life.

Then there’s the camera. While the camera hovers over Whit’s location in an adequate way for much of Where the Heart Leads, there are times when the camera gets all tangled up in the environment or is obscured by something. There’s a little movement in the camera, allowing you to move the angle around, but sometimes that’s not enough. Either these scenes needed to be positioned in a different way or the camera needed to be given more freedom to move. Some poignant moments are spoiled because of a tree that won’t get out of the way.

Lastly – the text size. As default, the text dialogue boxes from each character are entirely too small in Where the Heart Leads. There’s a nice idea hidden in the way this game does its text speech; The further a character is away, the smaller their speech box is, mirroring the way a character would be more difficult to hear the further away they are. In practice though, this means it’s difficult to see what some characters are saying at imperative sections of the game. Thankfully, there’s now an option to change the text box size. If this review has convinced you to play this title, head to the options and change that text size to something more comfortable as soon as you start. You’ll thank me for it.

Where The Heart Leads is an acquired taste. For those who demand action from their games, or life and death decision making in your narrative titles, this one won’t be for you. The stakes in this game are family sized, the decisions made at a workaday level and the cast almost ordinary. Even with a few niggles though, some smart writing and plenty of charm create a series of characters you can care for. It’s easy to get invested in their fate and to find the decisions directing their lives challenging to make.

Where The Heart Leads is available now on PS4 (reviewed on a PS5 via backwards compatibility).

Tags: Armature Where The Heart Leads