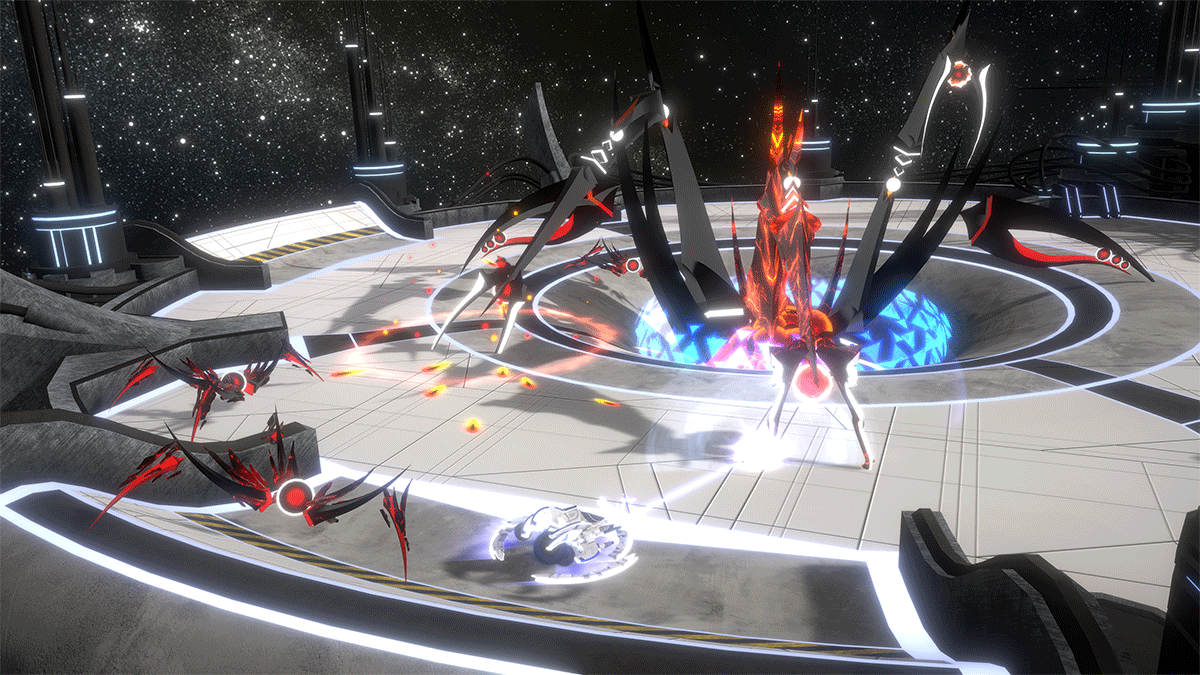 A sci-fi shooter with ground hugging bullets, Curved Space can't quite capitalise on its potential. The Finger Guns Review.

Have you ever dreamed of committing retaliation against those pesky spiders that cause you so many frights in real life? Well, Curved Space may be just the game for you. A twin stick arcade-like shooter, Curved Space allows you to live out your wildest genocidal dreams against the digitized arachnid foes.

With a wide arsenal of weapons, an eye catching

graphic
stylee and an interesting leash mechanic, Curved Space has some positive
aspects going for it. It’s unfortunately hampered by some technical problems, repetitive objectives and a lack of intensity in it’s gameplay. It has to be said though, blasting spiders to smithereens will always have a certain satisfaction to it.

The central premise of Curved Space is it’s disorientating, purposely deviating map design. Levels twist and turn in on themselves, shifting you upside down and discombobulating your perspective frequently. It’s like being in a dishwasher going at full speed, but in space. Initially I feared this would give me motion sickness, but it was surprisingly easy going, even over longer play sessions.

While this creative design is well crafted on some levels, it quickly loses its appeal and does little to contribute to the overall gameplay. Objectives or enemies rarely make use of the twisting geometry and so it comes across as more of a neat gimmick than solid game design. Even tasks that require you to eliminate certain enemies or destroy particular nodes have a navigational tool that guides you to them. Consequently reducing the potential for chaotic dashing to find your target through the swarm.

Whether it be the asteroid, space station, railgun or your nifty spacecraft itself, the levels have a clean and easily perceptible aesthetic. The railgun map is particularly nice, as railguns always are. What struck me more however was the backdrops to the small maps you blast spiders upon. Whether it be the massive, imposing sight of a planet. The vast, open expanse of space or the ery, impending rifts that open in the levels. All of the backdrops look striking and I found myself stopping frequently just to marvel at them and take them in.

Graphically then, Curved Space is fine enough, with the levels themselves being serviceable while the backdrops add a bit more oomph.

But we’re not here to admire space or the rocky terrain of an asteroid. We’re here to brutalise digital spiders and chew space gum. To this end, Curved Space offers a healthy selection of weapons to aid your destructive endeavour. Starting off with a straightforward blaster, defeating enemies will gift you new options. Shotguns, snipers, seeker mines, rockets, micro-missiles, pulse weapons, energy lashes (includes a scorpion version… which is awesome), flamethrowers are all accounted for. There are some nice surprises too like the weed wacker (think the saw blade from Dead Space), sandblaster and jackhammer.

Each weapon type has its own variables to account for, and each was somewhat useful. Though, I found myself relying heavily on the pulse variations and a flame lance to carry me through efficiently.

It’s a shame then, that the objectives and tasks you’re provided with are so bland and uncreative. Most tasks include variations of surviving x amount of time, killing x enemy type a number of times, or destroying/drawing energy to power nodes. These objectives are repeated at infinum and after two levels you’ll have seen all of the supposed variety they offer. While this doesn’t harm the game too much overall, it’s a shame more creative ideas weren’t implemented to encourage interaction with Curved Space’s dizzying geometry. It also makes long play sessions more repetitive and doesn’t coalesce well with the vast armoury of weapons.

Some objectives also require the use of the leash or lash, one of Curved Space’s better mechanics. Spiders can be latched onto using a cowboy-esque energy lasso which pins their distance. The lash can then be released to re-attach to power nodes or even other spiders. Dashing into lashed spiders creates a satisfying crunch and suitably is a powerful move that dishes out some serious hurt. It takes some getting used to and a bit of practice, but once I mastered it, it became an efficient and powerful means of dispatching the bigger, stronger menaces. Attaching spiders to power nodes also harvests them, where they pretty much implode, which is cool.

You also have the option to use overdrive, which activates an increased amount of power. Overdrive can make your weapons fire faster, more powerful or increase their radius or range. It feels like a power trip in just the right way, but takes some time to fill up the bar so it doesn’t become too much of a crutch. Experimenting with different weapon’s overdrive versions was good fun initially, though it didn’t do much to persuade me away from my tried-and-tested loadout.

Luckily, Curved Space understands how to reward the player frequently and meaningfully. Each level or boss defeated during your runs gives you the option of 4+ upgrades, of which you select one. The further you go without failing, the more upgrades you acquire, with some being stackable. It provides a welcome feeling of progression, as you install damage boosts, lash upgrades and other gadgets. Unfortunately, this does have the knock-on effect of making the campaign mode a relative breeze. I died a grand total of 1 time over both my normal and hard playthrough. Hard difficulty was shockingly easier due to the aforementioned wealth of upgrades, which was somewhat disappointing.

Which brings me to the campaign itself. Curved Space has a decent solo offering, with a typical story run lasting 1-2 hours. The story involves some light decision making that determines in what order you fight bosses and gain specific upgrades, but it’s nothing significant or wholly interesting. The dialogue and voice acting is fine if nothing special and it at least doesn’t out-stay its welcome. I never particularly became invested in nor cared about the story beats, but it at least provides some context and is a serviceable effort.

You can imagine my disappointment then as I faced the final boss on my second run, readying myself to try extreme difficulty, that said boss simply despawned. Yup. Popped straight out of existence as it manifested its second form. Three measly pulse shots and it dissipated into the ether of space, never to be heard from again. Of course, this wasn’t meant to happen. It’s health bar remained at the top, it didn’t return and so I couldn’t finish the battle to progress. I retried it 5 times, using different weapons, waiting longer, closing and reloading the game. Nothing worked, no dice. Consequently, I decided to leave the campaign mode there, as I didn’t particularly feel motivated to do it all again.

Of course, this may have just been bad luck on my part and unfortunate circumstance. But, I’d be remiss not to mention a progress-stalling glitch in the primary game mode. I also ran into a couple of significant framerate drops playing on the PS5. Admittedly, this was on a level with a lot going on and a pretty giant boss stomping for me. It wasn’t anything horrendous or unplayable, but it was certainly uncomfortable.

Outside of the campaign there are a few other options. Daily runs challenge you to last as long as you can for the highest score to compete with other player’s totals with randomised content. Survival, endless and arena modes are also accounted for. There’s also some challenge modifiers you can activate should you want to make your experience more arduous and you can select your preferred maps, which is appreciated.

Overall though, while there were some fun moments and enjoyable spider-slaughtering segments, Curved Space was rather underwhelming. It never quite captured that chaotic, adrenaline fuelled mayhem that the best twin stick shooters have. It’s a decent enough time and probably worth a shot if you’re a fan of the genre, but it’s tempered by repetitive and unimaginative gameplay structure. At least the backdrops were nice and the upgrade system was empowering.

Curved Space is a decent twin stick shooter which has a variety of weapons, striking level backdrops, satisfying upgrade systems and a cool leash mechanic. Sadly, it’s significantly let down by repetitive objectives, technical issues and level design which is aesthetically, but not practically, interesting. While not a bad game by any means, Curved Space sadly fails to capitalise on its promise despite its solid offering of modes.