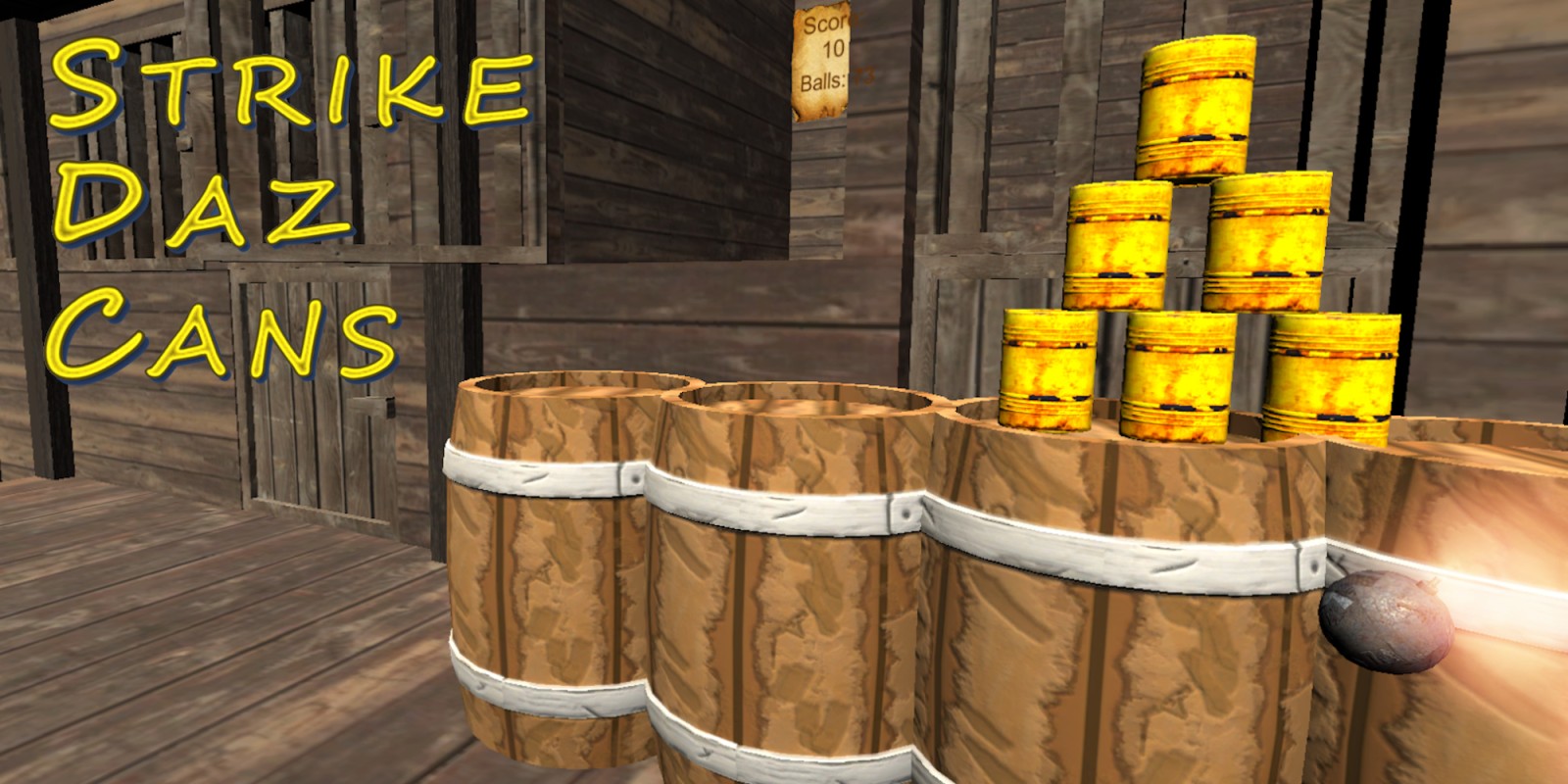 A rudimentary virtual recreation of a Tin Can Alley game, Strike Daz Cans is cheap in every sense of the word. The Finger Guns review.

I stumbled across Strike Daz Cans during my weekly perusal through the Nintendo eShop’s most recent releases. I had a small credit left in my account and it was burning a hole In my pocket. The game cost £2.99 in the UK – right in that impulse purchase price zone – so I thought “eh, why not?”. I’ve always enjoyed virtual recreations of fairground games like Carnival Games or Start The Party. Seeing as though it has been a depressingly long time since the world at large last had the opportunity to win a stuffed teddy at a Tin Can Alley, I thought this might fill that gap. I was wrong.

Strike Daz Cans has a simple premise. A series of barrels are set up front of the player that is playing via a static first person view. On top of said barrels are a stack of tin cans. You begin each run at the game with 100 balls and the aim is to use the Nintendo Switch touch screen to flick these balls towards the cans. Knock all of the tin cans off the barrels and a new stack will appear in its place. Each can that you knock off awards a point and you keep going until you’re ran out of balls. Like it says in the title, you’ve got to “Strike Daz Cans”.

The cans change formation each time they’re all cleared from the barrels and respawn. They start out in formations you’d see at any carnival game – 2 stacked on 3 in a staggered formation, for example – but soon start to take more outlandish shapes. Eventually, new items are included. There’s green cans which will add another ball to your existing total if you hit them. There’s red cans that will explode if you hit them. Vases get added to the mix which, if you hit them directly, will take a ball from your total as a penalty. Boxes that act as a much heavier blocker are eventually introduced too.

It’s not just the items you’re aiming at that change in Strike Daz Cans either. Eventually, the environment plays a factor. The windows at either side of the tin can alley open and cause a draft to run through the building. This draft changes the trajectory of your balls as they travel through the air. Chandeliers that swing in front of the cans are added later (more on those in a moment). To help you navigate these obstacles and formations, you’ll occasionally get served an explosive ball. These explode on impact and will send a shockwave through the cans, even if you miss.

All told, there’s 90 different tin can alley formations to tackle in Strike Daz Cans. If you’re going to complete all 90 with 100 balls (plus those you pick up along the way via green cans), you’re going to need to be a crack shot.

Which is where the primary issue with Strike Daz Cans comes in – it’s about as accurate as a three wheeled shopping trolley that has just been fished out a canal. The translation between motion of finger on the touchscreen and the motion of the ball is shoddy. You can’t change the starting position of the balls – they’re always located at the bottom centre of the screen – and if you try to move them before throwing them, they simply fall to the floor without forward momentum. Instead, you’re tasked with simply flicking the balls from where they are in the general direction in which you want them to go. There’s no targeting arc or feedback on whether your shot will head in the right direction or not. The speed in which you drag your finger across the screen seems to make no difference to the arc or power behind the throw and there’s no way to put spin on the ball. Mechanically, the game isn’t where it needs to be to make best use of the premise or content I’ve detailed above.

Visually, the game looks dated, drab and thoroughly boring. The setting is all brown and lacking in detail. The balls look like Terry’s Chocolate Oranges. I suspect if I go looking for them, I’ll find the barrels, tins and the background setting for sale in an asset store somewhere. Then there’s the audio – there’s no music in the game at all and the sound effects for the cans being hit or falling sound flat. Each tin makes the same sound too, regardless of where you hit it or how hard.

Despite its issues, I tried to complete Strike Daz Cans in order to give it a fair review. Only, I can’t. Once the chandeliers that swing in front of the cans were introduced, my progress always grinds to a complete halt. That’s because these hanging lights, despite having large gaps between their chains, seem to completely block off the space inside them. Because you’re unable to change the angle at which you throw the ball or add any spin, this becomes a frustration. I’ve thrown hundreds off balls at these chandeliers at this point and have not yet once hit a can that is hiding behind them. It’s like the developers decided that the latter aspects of the game needed less polish as fewer players would reach there. I’ve not been able to see the last few levels because of this.

Strike Daz Cans is cheap in every sense of the word. It might cost less than a large Caramel Macchiato but, as is so often the case with budget Nintendo Switch titles, you get what you pay for. This game feels like a barely functional tin can alley tech demo that has had a start menu slapped on it. It’s devoid of charm or personality and has frustrating, progress halting content. With so many free mobile games providing a better experience than this in the same genre, it’s very difficult to recommend Strike Daz Cans to anyone.