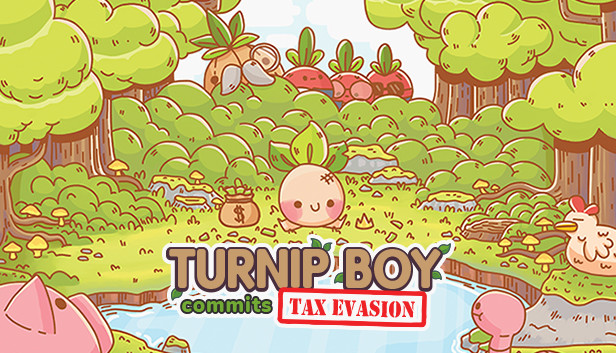 Turnip Boy Commits Tax Evasion is a fantastic title, but is the game underneath as good as the concept in your head now? The Finger Guns review:

Just straight off, Turnip Boy Commits Tax Evasion is a great title for a game. It’s one of those titles that tells you almost everything you need to know. You’re thinking some kind of Kafkaesque world where a turnip-shaped boy gets lost in a bureaucratic nightmare. Lot of papers, forms to fill in and filings to make. The IRS would be on his back constantly.

Well, this isn’t that. There’s a turnip-shaped boy, of course there is, but its actually a really colourful world full of Zelda-like puzzles and there’s only a small hint of greed and taxes. But not much. Let’s file an F1NGR GNS form and see what comes back from the IRS.

So spoiler alert, you commit the tax evasion in the first two seconds of the game. You are filed with a property tax demand on your greenhouse, and by ripping up the form (which is your only choice – you can’t NOT commit tax evasion), you are indebted to the town’s mayor, Mayor Onion. It’s just a slightly different way to lock you into indentured servitude, which let’s face it is how plenty of protagonists in plenty of video games go about their lives anyway. Just here you must do Mayor Onions bidding if you want to get your greenhouse back.

Turnip Boy lives in a world of vegetable and fruit-based people – can you use the word anthropomorphised when it’s plants? There’s old man lemon, the blueberry people, acorns and avocados that talk, you get the idea. You know, like Bugsnax. It’s an oddly dystopian world for all the colour on display; most of the plant people are preoccupied with their rent, money or real estate, or they are the ‘rotten’, intent on criminal damage of some kind.

There’s a tongue-in-cheek sarcasm to most of the script; at one point I found a trophy, and the item description says, ‘regular rewards keep players engaged’. Or the moment when I spoke to a blueberry about his snail tenant who wasn’t paying his rent, solved his problem by killing the snail, and then got accused of murder, only for everything to by fine once the rent money was found.

Mayor Onion gets you travelling all over the small realm around Veggieville. Each time it’s a quest either north, south, east or west of the town looking for an item he needs. The gameplay throughout falls into a structure of pick up or find an item, which answers one vegetable’s quest – they reward you with the item you need for another quest and so on and so on. It’s nicely structured and easy to complete quests one after another. You’ll earn a few items that you can keep, like a sword and watering can, but most need to be exchanged for the next thing to keep moving. Eventually you’ll find the item Mayor Onion needs and its back to your slavedriver, for another requirement.

However apart from this indentured servitude due to your tax evasion, there is not much else in the game directly to do with taxes, forms or money. There’s no money system, no shops. You will collect papers and cheques from other vegetables, but they are literally only there for you to rip in half like the tax form. There’s no choice but to rip up every document you have, which begs the question does Turnip Boy have a particular issue with paper documents of any kind, and is this what forced him to rip up that first fateful tax bill?

The fact that the game has nothing much else to do with taxes might sound great to you, but I found this left me feeling a bit short-changed. The title led me to think the game would be something it really wasn’t. Had there been more of an in-depth world, some kind of barter system, or a way to literally work off Turnip Boy’s debt, with the money counting down, maybe the whole thing would have felt more engaging. As it is, Turnip Boy Commits Tax Evasion is more concerned with odd-jobs, questing, and possibly the pickle mafia, than it ever is with taxes.

Gameplay revolves around exploring the small world of Turnip Boy and a few Zelda-like actions. You can stab with your sword the few relatively simple enemies found, or you can water plants which become kickable bombs, blocks and Portal-like warps. Putting aside the strange duality of some plants being alive and talking to you, and some being inert trees, or bombs you can fling (this is really strange when you dig up another turnip with no face at one point), these form the basis of a very simple selection of puzzles. I never found any real challenge in them, but they keep you moving and maybe that’s just as good. The game isn’t really good enough to demand you come back over and over for a fiendish puzzle.

Beyond the simple enemies, there are a handful of bosses, that will require use of the bomb plants, or your trusty shovel to dispatch. None really caused me any concern until a zombie woman you need to burn, where I died for the one and only time in the entire game. The bosses are simple to avoid, and though they do form mini-game challenges, they can also by stabbed to death in most cases too.

Beyond that there are a number of antiquated level design ideas that seem pretty dull at this point. I audibly sighed when I ventured into a graveyard to find a Lost Woods style map where if you choose the wrong door you go back to the start. The puzzles would fall into this old-school design category as well, so don’t expect anything very novel from the gameplay.

The world of veggieville and its pixelart veggie people is colourful and vibrant. I found this a good juxtaposition between the general malaise of their lives and each one only being interested in money, despite the lovely place they live. A comment of the human condition? Everything is pretty simple animation-wise but it does its job and I never found any glitches.

Turnip Boy Commits Tax Evasion has a nice selection of maybe half a dozen or so tracks, one for each area, and they are pretty fun and nothing outstays its welcome. There’s also plenty of fun sound effects, especially the fart sounds when you gain health hearts.

Turnip Boy Commits Tax Evasion is a relatively fun Zelda-like quest game, which you can lose a few hours in. I say a few hours, because I completed it in just three, with all but a couple of the achievements. It doesn’t take itself seriously, pokes fun at the audience, games and gaming culture, and a few other targets besides. What it lacks is any real flair in its gameplay loop, which is derivative of countless other games going back to even to the eighties. It evades really tackling tax evasion beyond that being a novel entry point into a game you’ve seen dozens of times before.

Lasting a few fun hours, Turnip Boy Commits Tax Evasion is a simple but effective Zelda-like adventure in a colourful veggie-filled dystopia. However, this salad dodger’s gameplay is derivative of dozens of other better games, and it doesn’t really do anything to explore its novel concept.