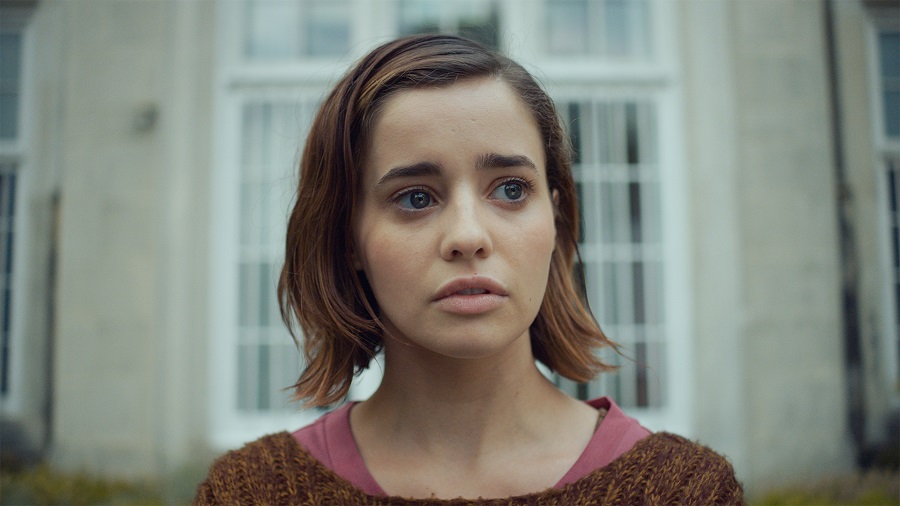 Shadowdropped during the Gamescom Opening Night Live event, PS4 and PlayLink exclusive Erica arrives with anticipation. Originally revealed at Paris Games Week in 2017, Erica went somewhat quiet and has now returned with a new actress in the lead and became immediately available at its second reveal. How does it stack up to the rest of the PlayLink-esque titles?

First and foremost Erica is entirely live-action, playing out far more like Hidden Agenda than say, Knowledge Is Power. The ‘interactive story’ format (perhaps mastered by the likes of Wales Interactive this generation) certainly has an audience and there’s little to doubt how impressive a technical feat it remains. At least to me, anyway.

The technical aspects of Erica are what’s worth shouting about the most. Whilst you don’t control the movement of Erica herself you do control her actions and choices. Through your interactions you’ll be using either your phone or the Dual Shock touch-pad to wipe away condensation on a mirror, turning on a vinyl turntable, cutting flowers, opening doors and gift boxes, even drawing and writing signatures, the flashback transitions being particularly brilliant. Everything Erica touches is down to you and the immediate movement of live-action through your actions is really quite remarkable. Erica is by far the most technically proficient ‘interactive story’ game I’ve played, offering a level of immersion that other PlayLink titles just haven’t been able to achieve.

It’s worth mentioning the game recommends you play through on your phone, if you’re able to and you should heed this advice, as you’ll discover navigating the game is simply much easier and smooth using a phones touchscreen. After two playthroughs using both controller methods, the Dual Shock touch-pad felt far more clumsy and like I had less control over the game as a whole, with the game having difficulty picking up the more subtle swipes.

You play as Erica (funnily enough), who after a tragedy in her childhood sets to understand what happened all those years ago in an attempt to rid her of the nightmares that haunt her. Throughout the story weaves and twists and turns and though there’s a small chance you can probably figure out where it’s all heading rather early on, the journey there is wonderfully engaging. Playing the titular Erica, actress Holly Earl brings an honest vulnerability to the character and is wonderful company throughout. Her every fear and haunted vision brought to life through her wide-eyed performance, adding layers that you don’t expect as the story unfolds. A rather terrific choice, even if I did spend the first half an hour going, ‘where the hell do I know her from?’ (Channel 4’s brilliant Humans. That’s where I know her from. I had to look it up).

She is ably supported by a diverse cast of characters, particularly those she meets once she arrives at the safe house (a bizarre choice, you’ll figure out why), the emotionally-damaged Tobi probably being the standout. You’ll also meet a detective early on who is by your side throughout but it’s fair to say he’s frankly terrible at his job and not even purposely. The fact he doesn’t notice what’s directly in front of him as it would probably affect the way the story plays out is frustrating, and he should be fired immediately.

As the plot twists come thick and fast everyone has their part to play in unravelling Erica’s story and there’s wonderful character moments I’m still thinking about that are shot and performed beautifully. It’s worth mentioning that everything about Erica as a whole feels high-end and polished to an inch of its life. The fact it’s launching for less than £10 is quite something.

I tweeted out when I finished my first run (maximum of around two hours) that I felt like I completely ballsed up the ending and after playing through Erica a couple of times since, I’m absolutely convinced I did. The joy of the game of course is that you can just start over and see where the story can go through your actions and choices, extending the games longevity through the non-linear narrative. I’m still not entirely sure if there’s a ‘good’/’bad’ ending, there’s a fair amount of them. It got to a point where I thought once I reached the ending where I was satisfied with the conclusion, that felt like the true ending. Much like the way I played TellTale games.

Erica is strictly a single-player experience though the choose-based gameplay plays well with being able to run through the game with another person helping you out, which is exactly what I did on my first run. My partner and myself became engrossed in Erica’s story and stayed up rather late trying to get her a happy ending. Safe to say, it didn’t happen but it’s the kind of game that whilst it’s only one person controlling the game, deducing and choosing where to go next is plenty of fun with someone else. It’s worth mentioning my subsequent playthroughs were on my own and were just as stressful, though when you’re playing with someone else you can look at each other and simply say ‘ah bollocks’ when it all goes terribly wrong.

Erica is a genuinely terrific achievement. As far as the ‘PlayLink’ aspect goes – even if the game is not officially part of Sony’s range – there’s nothing better out here. Technically it feels solid as a rock, with gloriously smooth transitions from gameplay back to FMV cut-scenes. You immediately feel part of the world and it never really gets old. You want to do right by Erica the moment you meet her and there’s very few games that offer this level of interaction, even if as a whole, the game is about the journey rather than the destination.

Erica takes interactive storytelling soaring to new heights, featuring a protagonist you genuinely care about wrapped up in what can only be described as a tremendously well executed technical achievement.

Erica is now available on PS4. Reviewed on PS4 Pro.