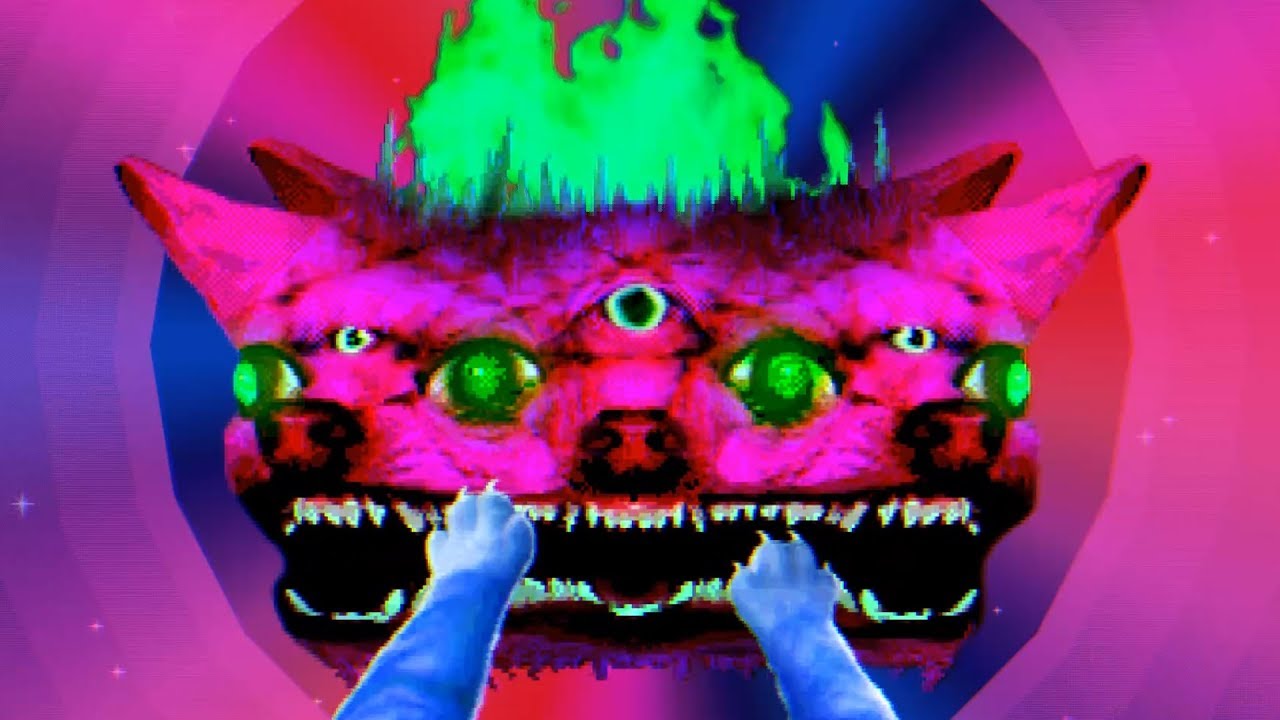 A brutal, psychedelic experience, PUSS! has finally arrived on PS4 and it is PAWesome. The Finger Guns Review.

I’m just going to lay this out – PUSS! (that’s the last time I style it like that) can be aggravating, assaults 3 of your 5 senses, will likely give you thumb cramp and might make you swear at your TV. It’s also utterly brilliant. A single stick maze game with a trippy, vaporware aesthetic, this game has been available on PC for more than 2 years but it is now making its way to PS4. Should you take time to get fur-miliar with Puss? Read on.

If you’ve every played The Maze game back in the mid 2000’s (or Scary Maze as it’s more recently known), Puss is an evolution of that concept. The idea of each level is to guide a cat icon from its starting position to an exit door which is waiting at the end of a maze. The kicker? Contact with the walls is fatal to the feline figure and the maze is often moving or evolving.

In one level, the Puss must navigate a maze where the horizontal and vertical routes conversely narrow until disappearing altogether. In another, a maze scrolls across the screen at all times with static buttons to reach which will open up a bridge to the exit but only for a short time. In others, projectiles fire randomly across a central section of the maze which sways as you navigate it. In one, shrimp barrel along the only path forward, setting a pace you have to match as you travel between them. Nothing is easy in this game but there’s a lovely simplicity to the game design here which allows Puss to get away with its punishing difficulty. You can look at each level and within a few seconds, understand what you’ve got to do. Actually doing it is the tricky part.

Before playing Puss, I’d never noticed how difficult it is to move very slowly but in a steady direction using a PS4 pad is. Some of the levels in this game have a leisurely pace about them but they’re deceptively difficulty to complete. Having to be restrained, staying within tight wall constraints as they move gingerly across the screen is just one skill you’ll have to master with Puss. Pattern recognition, millimetre perfect timing, lightning fast reaction speeds and the patience to get your ass handed to you repeatedly and still come back for more would help too. The fact that very few of the levels in this game look difficult at a first glance make it all the more chaffing. The solutions are simple. The failures are all of your own making. You didn’t more fast enough. You stopped in the wrong place. You got excited towards the end and ran straight into a wall. And when I say “You”, I really mean “I”. Repeatedly. For hours.

Thankfully, there’s a tiny amount of leeway built into Puss which keeps the light on at the end of the tunnel and the TV in one piece. Touching walls won’t immediately kill the kitty. Instead, you get some feedback in the controller which rumbles as you get too close and a TV static sound effect sounds when you’re touching. There’s some magic algorithm (not actual magic, probably scientifically built up over hundreds of hours of play testing and trial/error) which determines if you’ll die when that static sound starts. With experience, you get a feel for what you can get away with and what you can’t. Then you’ll start to win. Oh, the feeling you get when you just completely ace a level that has been giving you trouble. It’s intensely gratifying. Like, pull your t-shirt over your head and run around the house shouting “here we go, here we go” over and over levels of gratifying.

The challenge of Puss is enhanced by one of the most enticing risk and reward systems I’ve seen implemented in years. The game is made up of 5 episodes (well, 6 if you include the tutorial episode) which can be tackled in any order. Each episode is made of 10 levels – 9 randomly chosen mazes to survive and a boss battle awaiting at the end as the 10th. When you begin a chapter, you’re given 9 lives (because of course you are) which reduce every time you die. Obviously. Here’s the kicker – at the end of each level, you’re awarded a score for how well you performed. Finish a level quickly and without dying and you’ll get a better score. Do so repeatedly and you’ll start to get combo multipliers, boosting the score. This score matters because each time you hit certain cumulative score thresholds, the Puss gets another life added to their total. Lose 2 lives in a level but hit it perfectly on the third and you might win those lost lives back. Speed of completion is the biggest factor in the level score so this is where the risk and reward system comes in. There are plenty of sections in this game that offer momentary respite. Little ledges or squares that are safe to stand on so you can compose yourself and prepare for the next section. But what about if you just gun it? Put the paw to the floor and sprint to the end? It’s risky but the reward of more lives is oh so tempting.

Whether it’s by earning those lives or losing as few as possible along the way, you’ll want as many extra lives as possible when you reach the boss level at the end of each episode. Each boss in Puss is exceptionally difficult and unique in their own way. Thankfully, they play by the usual boss battle rules by having a weakness you’ve first got to discover and then utilise for victory. In one battle, you’ve got to race ahead of a giant fish, collecting POW icons which spawn bullets coming in the opposite direction. Another boss battle is like fighting a Beyblade made out of a mutant Chihuahua. Luring it into its own attacks are the only way to hurt it.

These bosses somewhat tie the story of Puss together which, I’ll be honest, I found to be utterly bananas and difficult to follow. If I’ve understood it correctly, the protagonist (cat-agonist?) has somehow been sucked into its owners TV and must now defeat the 5 bosses to retrieve 5 keys which will save the world. Or something. The narrative is not often at the forefront of this game and that’s likely for the best. It’s pitched at just the right level of absurdity and level on content. Any more and I would likely have scoffed at it. Any less and it would have past me by entirely.

The most stand out aspects of Puss are the visuals and the audio. A combination of glitchy vaporware, 90’s screensavers, VHS tape oddities, low-fi trippy beats and modern day pixel art, it has a strong thematic appeal. Starting each level is like playing an old home video that you found in someone else’s loft. And you’re pretty sure that house was haunted by fur-midable cat ghosts. There’s an absurdity to everything that’s enough to keep your eyebrows raised from start to finish of Puss. A kid saying “Caaandy” over and over. A level that uses pastel colours with a background that looks like the bottom of a swimming pool a la Miami Vice. A repeating soundbite of what sounds like the final notes of a brass band fanfare. The meow soundbite at the end of each level. The aforementioned shrimp. It’s a fitful style that pulls everything together into a truly mind-bending package.

The visual style is the cause of my only issues with the core content of Puss. There are times when the surrounding visual trappings overstep into the maze areas. For example, in one level a low-poly 3D dolphin ascends up the screen and completely occludes the path forward. When the game is already a steep challenge, completely covering the path forward feels like a cheap way to make it more difficult.

There are moments in Puss when I can’t tell the difference between the glitchy aesthetic and actual glitches too. During one boss battle, an giant image of an X button is displayed in the centre of the screen for the entirety. I’m 99% certain that it’s an actual glitch because pressing X does nothing. If it’s not a glitch, it’s just another example of the visuals impeding the game play.

A few visual niggles and glitches aside, PUSS! is a challenging but equally rewarding game that’s utterly bonkers in all the right ways. An offbeat, eccentric art and music style, combined with an excellent risk/reward system, means this game gets a paw-sitive recommendation from me.

PUSS! is launching on the PS4 (review platform), Xbox One and Nintendo Switch on the 19th of Feb 2021. It is also available on PC and mobile devices.