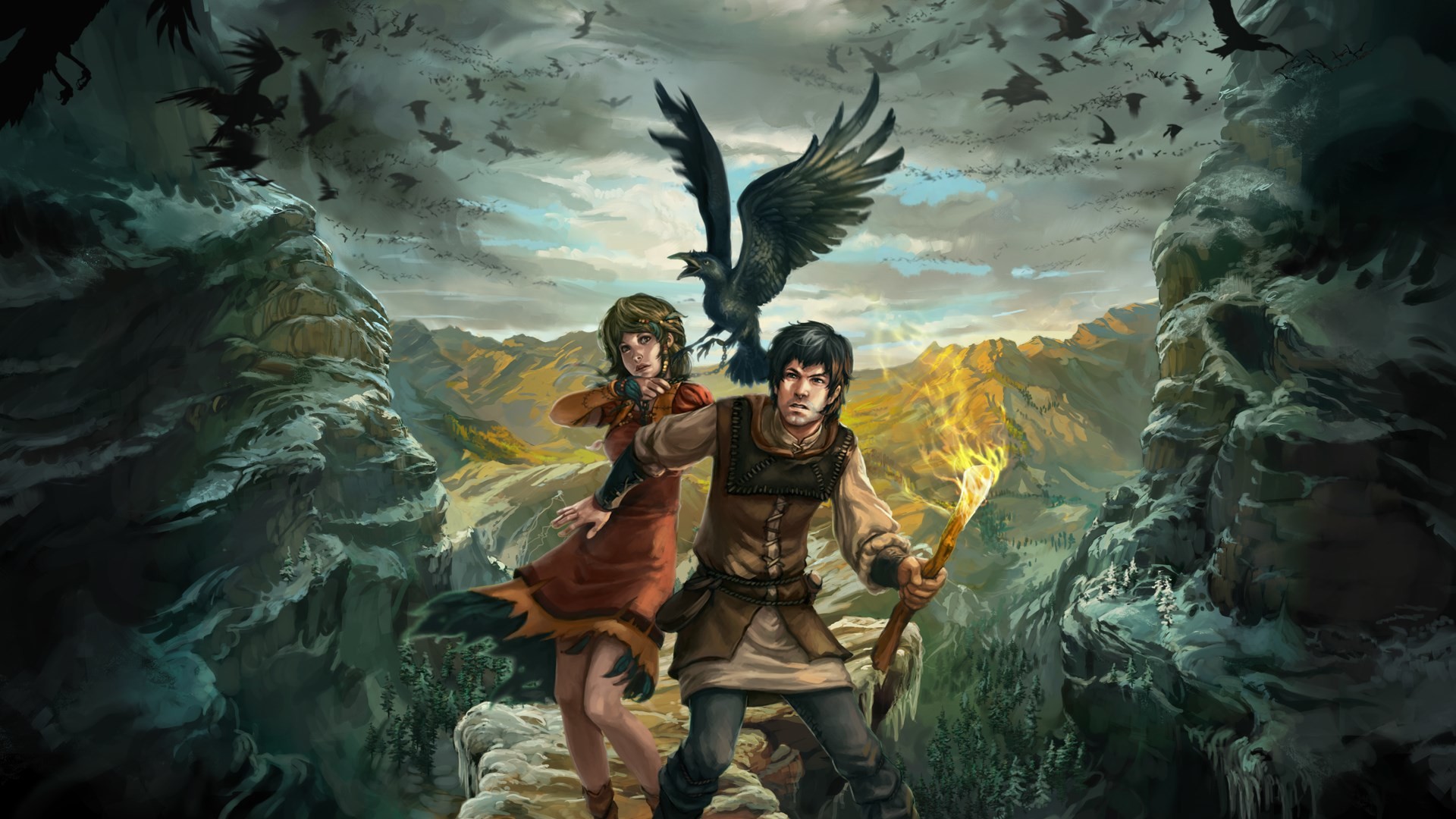 A point and click adventure that has glimpses of ingenuity, The Dark Eye: Chains of Satinav is an otherwise mundane adventure. The Finger Guns Review.

You can be forgiven for not knowing anything about the table top RPG series The Dark Eye. While it has been available for more than 30 years at this point and has been a massive success in German, it hasn’t been available in English until the last few years. There have been a number of video games set in The Dark Eye’s fantasy, medieval inspired world Aventuria over the years. The Dark Eye: Chains of Satinav is one of them. It originally released in 2012 on PC but now it has arrived on consoles via the original developers Daedalic Entertainment. Is this one point and click adventure worth taking a look at? Well, yes, but only if you’re desperate for a game of this ilk.

The Dark Eye: Chains of Satinav is set in the Kingdom of Andergast. Players take control of a bird catcher called Geron who lives a meagre and pretty miserable existence. Years earlier, an evil doer known as The Seer failed in his evil plan to overthrow the kingdom. As The Seer was burned at the stake for his crimes, he claimed to have foreseen a future in which Geron would bring about bad luck for Andergast. This prediction had lived with the bird catcher ever since with the people of the City, who’re notoriously superstitious, ostracising him.

At the start of The Dark Eye: Chains of Satinav, Geron is attempting to win a city wide competition, much to the chagrin of the other competitors. This acts as the catalyst for a series of events that has the bird catcher meet a fairy, travel across Aventuria, skirt around Orcs, travel through magic portals, try desperately not to fulfil old prophecies and hopefully save Andergast from an old foe.

While I won’t spoil the finer points, a lot of stuff happens in Chains of Satinav. Unfortunately, the narrative often feels a little disjointed. Broken down into 5 different chapters, each has a very different pace and feeling to it. Chapter 4, for example, is very condensed with a hefty lattice of linked puzzles to overcome that can take hours of trial and error to solve. It’s a thick chapter with a lot of detail to absorb and exposition to take in. The 5th and final chapter then just rockets by, moving at a much more rapid pace with simple obstacles to overcome. It’s not the crescendo finish that the game hints at for its majority. The first 3 chapters are much more balanced but don’t flow into one another as naturally as they possibly could have. Cut scenes separate each chapter and the game then plonks you in a new area with new problems to solve.

The narrative stumbles aren’t helped any by a main cast of characters which lack distinguishing personality. Geron channels the spirit of downtrodden Millennial a little too well for a fantasy character. He’s mopey, a little whiney and the way he’s written feels like he’s always a step behind where the player is. Thankfully he’s joined by another character for much of his adventure, Nuri, who’s much more likeable. Bursting with whimsical innocence and an air of mystery, she’s the stand out in this game, even if she’s a little two dimensional at times. There’s a bunch of fantasy stereotypes and genre trope characters in The Dark Eye: Chains of Satinav too. The pompous king. The grouchy guard who won’t let you pass. A monologuing villain. I could go on.

This game is a traditional point and click adventure. Unlike the PC & mouse version however, the PS4 version of The Dark Eye: Chains of Satinav doesn’t use a cursor. Instead, it uses the left Dualshock stick for movement and the right stick to change direction of focus. When items of note are highlighted with a flick of the right stick, a menu appears which maps activities like “Look At”, “Talk To”, “Pick Up” and more to the face buttons on the PS4 controller. While it’s no replacement for an actual mouse cursor or touch screen control, this is an easy to understand and user friendly way to control a genre that’s not often well optimised for consoles.

Point and click games live or die on the quality of their puzzles and this is where The Dark Eye: Chains of Satinav occasionally shines brightest. There are some ingenious puzzles here that are well structured and designed. There’s one particular puzzle that uses impossible geography like an MC Escher painting that stands out as actually quite brilliant. The signposting here is limited but is just enough to get your thought process aiming in the right direction. For example, at one section of the game having Geron look at a well will trigger the vocal line “That well looks strangely familiar”. By this point, it should look familiar to the player as they’ve recently walked by one that looks similar. These little nudges in the right direction are hit and miss. While many are pitched just right, there are times when Geron’s monologuing makes the game too easy or don’t do enough to guide the player to very obscure solutions.

Not every puzzle in this game is enjoyable because of this. There were times when I only discovered the solution to a particular issue by methodically interacting with everything on screen and in the inventory in every way possible way. When I did discover the solution, there was no “Eureka” moment. Instead, I thought to myself that I’d have never come up with that solution without plenty of trial and error. The solutions don’t always feel logical, instead feeling coincidental or accidental.

Which brings us to the most unique and interesting aspect of The Dark Eye: Chains of Satinav – The ability to break and repair items in the world or inventory with magic. Inexplicably, Geron has always had the ability to break fragile things with just a thought. Later, he obtains the power to fix broken objects too. This means that many items Geron obtains can have 2 different states of being – broken and whole/repaired. In some puzzles, you’ve got to break or fix something to make them useful. The best and most thought provoking puzzles in this entire game require items to be broken, used someplace in the world and then repaired in their new position. This mechanic adds a surprising level of depth to the item management that’s rarely seen in the point and click genre.

The Dark Eye: Chains of Satinav is easy on the eye. The hand painted backgrounds form an engrossing and detailed world to explore. The medieval European towns are offset against the fantastical magic locations that look like the front cover of a Forgotten Realms novel. The structure of these views work well as point and click frames too. Exits are almost always clear and items of interest draw the eye with their placement.

The character animations are the only visual elements that let down this game. Geron is stiff and awkward as he moves, like he spent hours working out the day before and is working through some tight muscles.

The audio in The Dark Eye: Chains of Satinav are a bit of a mixed bag. The ambient noise and background music in the entire game is competent but is far from being remarkable. None of the music stands out as being bad, but none of it is memorable for its quality either. The one thing that does stand out for this game is the vocal performances and not in a good way. Nuri and Geron are well performed but much of the supporting cast sound totally out of sorts. There’s a flatness to the delivery of much of the vocals that feel totally out of context in which they should be delivered. In one instance, a supporting character is being threatened and she sounds almost bored rather than scared in response.

I experienced quite a weird glitch in the PS4 version of The Dark Eye: Chains of Satinav too. At the start of Chapter 2, the world “Language” started to randomly appear on every single screen. It would change places around the screen when I re-entered a room but it was always there. This was far from game breaking, more of a little nuisance, but it was a little iterating none the less.

The Dark Eye: Chains of Satinav has glimpses of ingenuity with its puzzle design, it looks great for its age and it has a satisfactory port of a point and click system on the PS4. Unfortunately, the story doesn’t pay off, often feeling disjointed along the way which isn’t helped by some uninspired vocal performances. Hopefully the sequel is better.