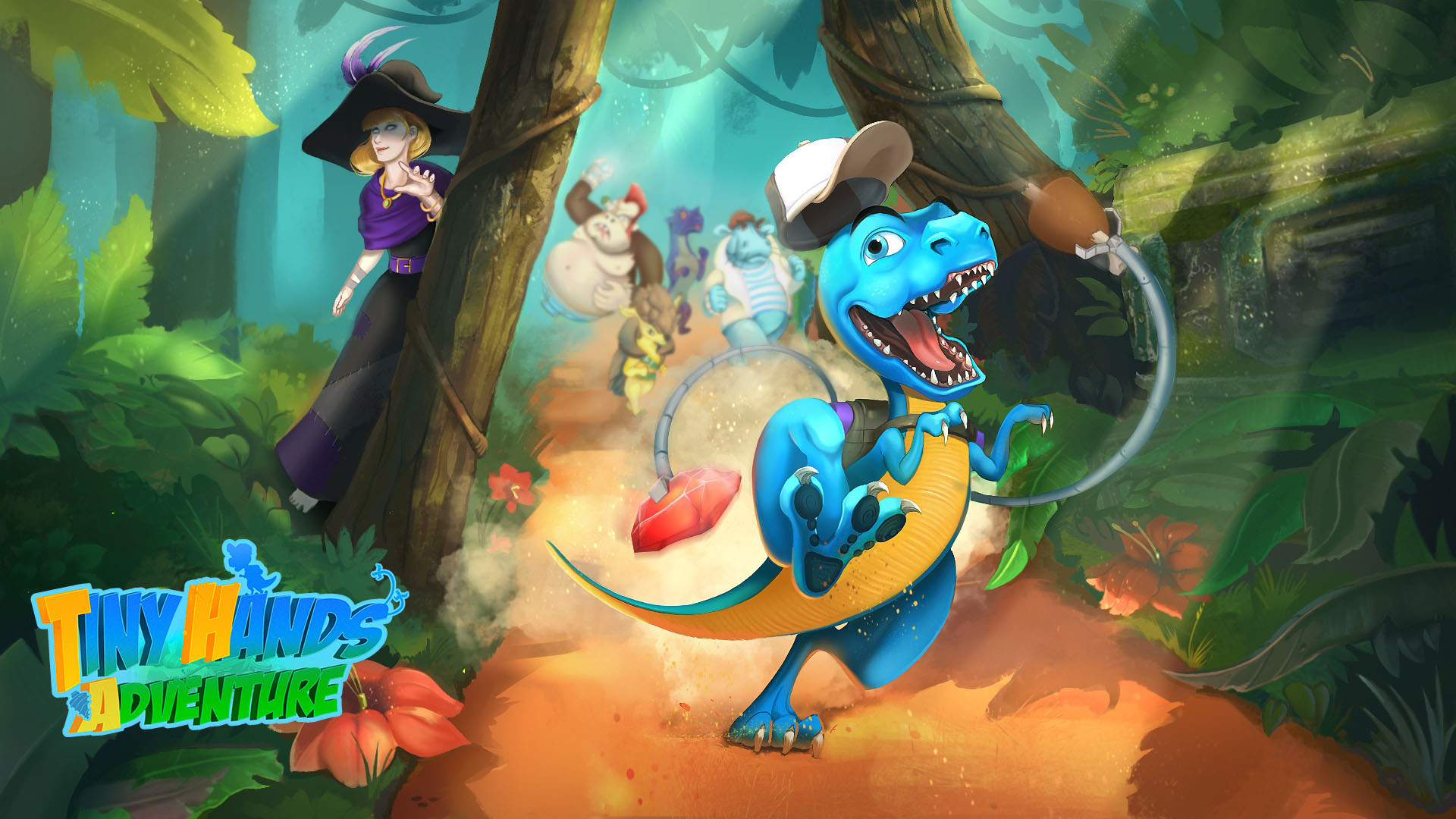 A game that borrows from the best in the genre but can’t replicate their quality, Tiny Hands Adventure is a disappointing title. The Finger Guns Review.

A game that borrows from the best in the genre but can’t replicate their quality, Tiny Hands Adventure is a disappointing title. The Finger Guns Review.

Over the years, we’ve achieved a lot within the narratives of 3D platformers. We rescued our dragon relatives in Spyro, defeated nefarious scientists with Crash, rescued princesses with Mario and saved the universe with Ratchet & Clank. Regardless of the protagonist or theme, each of these games have a threatening situation to motivate the player forward. This is where Tiny Hands Adventure (developed by Blue Sunset Games/Storm Trident) immediately goes off the rails.

In Tiny Hands Adventure, you play as a cap wearing t-rex called Borti. What quest drives this character forward? Captured family? World threatening danger? No. Borti wants bigger arms. He has started to play ‘soccer’ and unfortunately, his little arms aren’t up to the task when he’s playing as the goalkeeper. The arm span challenged dino asks a powerful fairy to help him with this predicament. This fairy agrees, but in return Borti has to collect elemental relics from various worlds that are protected by powerful prehistoric animal bosses. And so, Borti heads out on the most self serving quest I think I’ve ever experienced, smashing his way through the universe just so he can suck less as a goalkeeper. Ho boy, did this ever need a rethink.

The game play in Tiny Hands Adventure isn’t much better unfortunately – but I must commend the developers here for their aims. They’ve combined the themes, mechanics and structure of many of the major 3D platformer games over the past few decades into one package. One level is obviously heavily inspired by the bolder escape levels in Crash Bandicoot. Another series of levels are top down mazes like the overworld in Yooka Laylee and the Impossible Lair. There’s a handful of levels that are very similar to the look and structure of the Kerwan levels in 2016’s Ratchet & Clank. There’s a tower climbing level that challenges the player to traverse a spiralling staircase. There’s levels that are predominantly made of staircases to climb while boulders career down them towards the predatory protagonist. Some levels look like colourful comic book pages and play on a 2D slice along the level. Of course there’s an ice level with slippery surfaces.

The main aim of each level is to collect a red gem then reach the exit before you run out of lives. If you do happen to run out of extra lives, any progress you’ve made is scrubbed and you’ll start the level from scratch. The levels are grouped into series’ of 4 that can be tackled in any order from Crash Bandicoot-like hub rooms (just without the charm that the aforementioned marsupial’s games had). Once all 4 gems in a hub room have been recovered, a boss battle is unlocked. Defeat this boss and the next hub room is unlocked along with a new tool to use.

The core issue with Tiny Hands Adventure is that it can’t replicate the quality of the games it attempts to emulate. In some instances, the game design falls wildly short of that mark. The sci-fi inspired levels have one of the most counter-intuitive camera’s I’ve ever come across. At times you’re walking towards the camera but it’s so close to Borti that he’ll walk into enemies before they’ve even come into view. In the comic book themed levels, the visuals often don’t match the physical presence of the enemies or platforms. It’s not uncommon on these levels to jump onto a venom spitting frog in order to kill them only to land short because of this discrepancy. In the top down levels there are explosive boxes you’ve either got to slide under or jump over. Because you’re looking down at them from an almost-top-down angle, it’s often difficult to tell if you’re supposed to jump or duck. In the staircase based levels, the camera angle is side on which means you’ll sometimes die from a boulder you never see coming. This whole game is filled with little annoyances caused by clumsy design that maybe could have been avoided or fixed.

Even those levels in Tiny Hands Adventure that are not beset by design niggles struggle to elevate themselves above mediocrity. There’s very little here that isn’t just redimantary platforming/traversal followed by a group of animals to defeat. Despite their being a decent variety of enemy varieties, they only have 2 attack patterns. They either stand still and shoot stuff at Borti or they simply walk in his direction as soon as he comes close. There’s no attack animation either. They injure Borti simply by touching him.

All of this is compounded by a general floatiness and imprecision to the way Borti moves and leaps. It’s not as tightly refined as the greats in this genre and feels like the dino-tagonist is both bigger than his physical appearance and slippy, likely to slide off a ledge if you don’t hit a jump perfectly.

The boss battles to each of the game’s 5 hub worlds are both a high and low point. Each tests the player to do something a little different but they all use the same moveset that Borti begins the game with. The difficulty levels here aren’t progressive however. They don’t get more difficult the further you progress. Instead, they’re either simplistic or annoying because there’s an element of luck involved.

When a boss in Tiny Hands Adventure is defeated, the deal striking fairy appears and gives Borti a new tool to use. These tools form the basis of the replayability in the game. In each level there is at least one optional collectable that requires the use of these objects. These area’s aren’t involved or interesting – they’re a glowing patch on the ground that triggers a message on screen – but completionists will need to replay each of the games 25 levels at least twice. Here’s the kicker – the third tool given to Borti? Longer mechanic arms with hands on the end. Why exactly the prehistoric protagonist continues to work with the fairy after she grants his original wish, I’ll never know.

Each level has 5 optional stones to collect which unlock a hard mode for that level once all have been obtained. If you can attune yourself to the issues that this game has and want a further challenge, this is on offer.

Technical issues made this impossible for me. The frame rate in Tiny Hands Adventure can really slow to a crawl, especially when the camera is turning and moving at the same time. On 2 occasions, the game simply stopped responding to controller inputs. I originally thought my controller had broken but the button to return the Xbox to the home menu worked fine. After restarting the game, it began working again. The nail in the coffin of my experience with this game was when the game simply stopped auto-saving. I switched on the game after previously reaching the last hub world only to find that I’d lost 3 hours of progress. This persisted so the only way to finish the game was to do so without closing the game. Each time I did, the game resorted back to that original save. The tried and tested tactic of deleting and reinstalling the game didn’t fix the issue.

In this critics opinion, Tiny Hands Adventure is poor. It’s a 3D platformer that takes inspiration from the classics in the genre but doesn’t demonstrate an understanding of what made them so fun. Littered with design issues, a few technical hiccups and a narrative which is laughable (even to my 7 year old), it’s hard to recommend this game when it’s a shade of the games it attempts to emulate.

Tiny Hands Adventure is available now on Xbox One (reviewed on an Xbox One S), PS4, Nintendo Switch and PC via Steam.