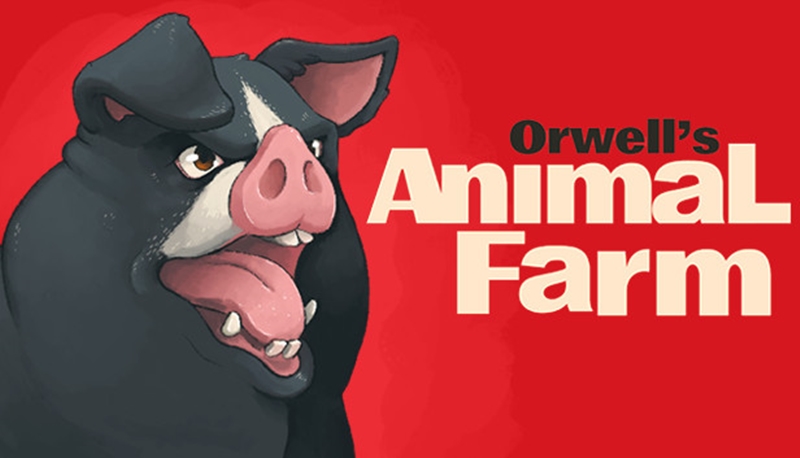 Spoiler Alert: If you’ve not read Orwell’s Animal Farm, there are going to be spoilers ahead, but also what have you been doing? Well, now that you’re here, perhaps you don’t need to read it, perhaps you could just play it instead? The Finger Guns Review:

Spoiler Alert: If you’ve not read Orwell’s Animal Farm, there are going to be spoilers ahead, but also what have you been doing? Well, now that you’re here, perhaps you don’t need to read it, perhaps you could just play it instead? The Finger Guns Review:

Twenty years ago I was in secondary school. In English literature every student was required to read a modern classic novel out of a small shortlist. You didn’t get to choose; it was just assigned to your class. In my school that meant being forced through Lord of the Flies, To Kill A Mockingbird, Of Mice and Men, or Animal Farm. At that age those types of books are full of meaning that you don’t understand and teachers teaching you enough to pass the test. And then you forget it all. It means they end up being thought of as boring and dreary reads. You remember, being asked to read aloud for a page or so before handing over to the next kid, or that you had to read a particular chapter at home before class the next day. It was excruciating going through a novel at a snail’s pace and pouring over every section the teacher wants to draw your attention to.

As you might have guessed, my class read Animal Farm by George Orwell. Chapter by plodding chapter, over more than an entire term (which is a long time for such a short book). This meant that for a good portion of my young adult life, I both hated, and didn’t really get the big deal behind George Orwell’s seminal work.

As an adult, I read Animal Farm (and 1984) again and found it pretty revelatory. By your thirties, you’ve absorbed some of the history and it’s meaning through osmosis. I knew more about Communism and the Russian Revolution from other sources. I understood more of the cultural history that Animal Farm adapts and allegorises. Seeing these things allegorised, and understanding what events are alluded to from history, well it makes the read far more engaging.

Now combining reading and gaming, my two favourite hobbies, into one package, Nerial has adapted Orwell’s work into Orwell’s Animal Farm; half visual novel and half management game, where you get to determine if the farm fails or thrives. A book millions have read all across the world, a tale whose political allegory is as important in today’s climate as it was 80 years ago. Have they bitten off more than they can chew, or is it a revelation?

For those who didn’t study it as a kid or read it since, Orwell’s Animal Farm is the story of a farm where the animals decide they’ve had enough and overthrow their human master, chasing him off. They then set about trying to run the farm themselves. They introduce animalism, a series of rules by which the farm will be run, which say that all animals are equal now, there are no masters. Of course, the pigs, with their superior brain power, take charge, organise meetings and work crews, and generally try to run the place. The other animals try to work, and try to live and abide by their new creed.

The novel follows the events of the Russian Revolution with two of the pigs, Napoleon and Snowball, representing Stalin and Trotsky, and their differing ideas on how things should happen. I won’t spell out the whole novel, but things escalate as they do in a good narrative and eventually come to a head.

In a novel everything ends as the author intends, in one particular way. But Orwell’s Animal Farm is an adaptation as a game, and here you can affect the running of the farm and the events of the novel in ways that never happened in the book. The adaptation keeps much of the tone and the allegories intact, but with eight different endings and many leading paths that divert from the source material and pose what-if questions, it’s very possible to veer far from Orwell’s novel.

The game adaptation loses something in allowing its story to verge in different ways. The novel has a purpose, a warning to impart. If you go down any of the other seven routes, that meaning is subverted, washed away, and you are left with an overall less allegorical and meaningful outcome.

As far as flow and scene by scene progress go, I also got a very disconnected feeling a lot of the time. Things just seem to happen arbitrarily, scenes and problems are strung together with little regard for showing causality or plot. The novel is also a little like this, so its not entirely the game at fault, but in places you will feel like a plot point or moment has come from nowhere.

If you follow the novel’s plot as you play, the allegory stays intact and an interesting story unfolds even if scene by scene the flow seems choppy. The animals make scapegoats, disseminate propaganda, rewrite history, and of course, let absolute power corrupt them.

Orwell’s Animal Farm presents a pastel coloured world for the farm itself, and tells the story through both voiced narration, and unvoiced text-based conversations. It’s comprised of a series of screens, depicting the landscape of the farm where you can assign tasks to animals, or the barn interior for meetings. There aren’t many of them, most of the game feeling like it takes place in maybe half a dozen screens.

Gameplay is also pretty simple. It’s a mix of a few resource management tasks, like keeping the fields tilled and planted and then harvested, sharing out food and repairing buildings or making defences. I regularly found I wasn’t given the options to manage the farm the way I wanted. Even though it is possible to make the farm thrive, I never really felt in control. Day to day challenges felt arbitrary, and that I was constantly fighting fires that the game presented me with, rather than being able to plan. If I’m meant to be able to take control, I need more control. This felt like scripted control which is probably not surprising.

The management parts feel like they need to gamified further. I needed a clearer menu of options; how many animals do I actually have to do the work, which ones are good at which things, mood meters so I can know when to let the chickens rest or the cows keep their milk, the option to do the harvest on time (it always seemed to be late on my farm), and to plant both fields if I want to. You don’t really feel in control of any of this. This is not Orwell’s Stardew Valley.

Repairing the farm buildings was only an option at certain pre-determined times, I need the option there constantly. Because of the gamification that does exist, you feel like you should be able to succeed at these things to a far greater extent than you can. But however much I felt this way, things are not predetermined. It is possible with luck and some guesswork, to make Animal Farm thrive.

I found the narration disjointed and mechanical. There are all the appropriate sounds on the farm, but none of the animals are voiced, and the music is there, but you’ll rarely notice it. The drawings are nice enough, pastoral in feel, but it’s rare that anything will stand out. There have been far more interesting and eye-catching designs for the characters in Animal Farm over the last 70 years.

So is Orwell’s Animal Farm a good teaching tool, for those who don’t want to haven’t read the book? Well, no. It’s interesting to be able to play through the narrative of Animal Farm, to experience that world but have the plot turn out in different ways. I can imagine it could spark some lively debate in English Lit class about how things could have gone had certain events not happened in the book. However the kid who plays this instead of reading the book is going to be shit out of luck come exam time, because it only follows the plot if you know the basic events of the plot in the first place. If there were an option to lock the events to the novel version, this could become a kind of fun interactive Cliff notes edition.

So, is it a good management game with choice and ramifications and control over the farm’s destiny? Well, no, it’s not that either. There’s far too little in the way of controls and menus to actually see what you are doing. I found it frustrating to just be set one-note challenges each sunrise, and find supplies dwindling, without tangible ways to make them last. Those who like management games will find the lack of control frustrating, and the scripted aspects trying.

The game adaptation of Orwell’s Animal Farm tells a disjointed story, without the kind of buildup and nuance that makes it a classic novel. As a game, it lacks the kind of options and menus necessary to make you feel like you’re ever in control of your farm.

Disclaimer: In order to complete this review, we received a promotional copy of the game. For our full review policy, please go here.