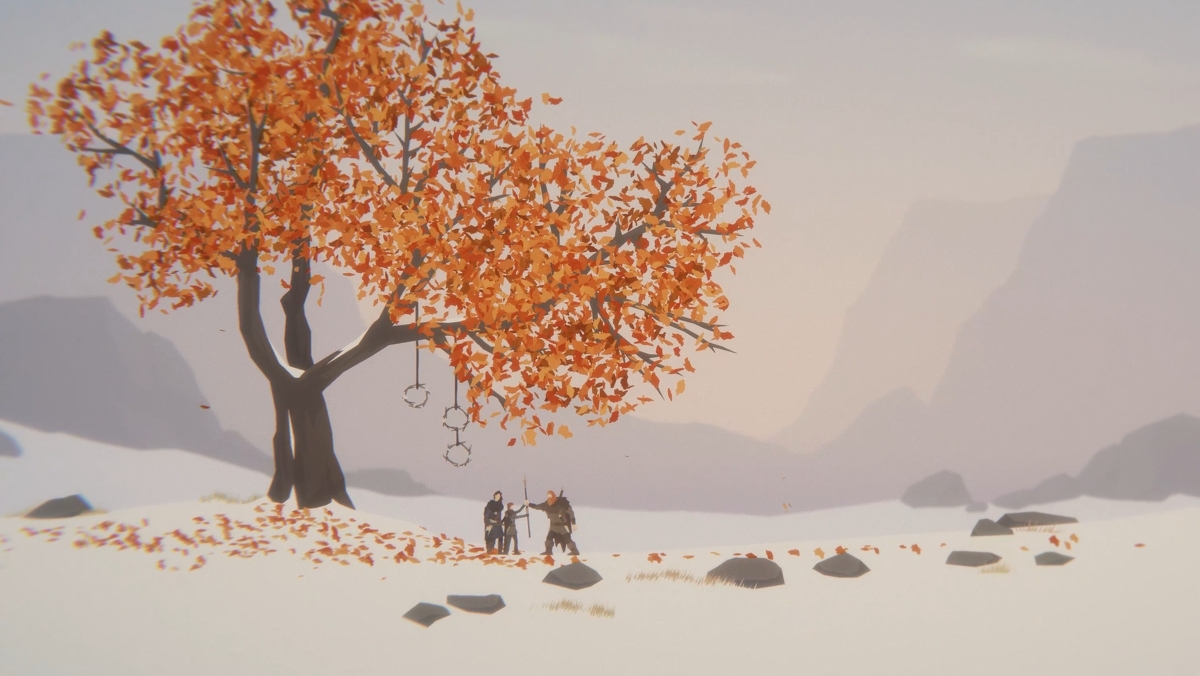 A brutal combination of atmospheric platformer and 2D soulslike, Unto The End is rewarding for the patient. The Finger Guns Review.

A brutal combination of atmospheric platformer and 2D soulslike, Unto The End is rewarding for the patient. The Finger Guns Review.

When you first start Unto The End, it warns the player to leave their expectations at the door. It states that it is a game unlike anything else. That’s partially true. There’s a few unique aspects of Unto The End that stand it out from the crowd but it’s not entirely revolutionary. The fastest way I can describe Unto The End is that it feels like a combination of a Play Dead cinematic platform game, like Limbo or Inside, and a 2D Soulslike game like Salt & Sanctuary. It’s brutal but approachable. It tells an interesting story and it does it all without dialogue. It’s both new and comfortably familiar.

The tale that Unto The End tells is, on the surface, a simple one. A viking warrior/father is returning home alone across a frozen wilderness. This journey will not be an easy one as shortly after setting out, the father falls into a cavern. Here he comes into contact with a monstrous goblin race living in the caves below and the remains of other Norse-like warriors who fell foul of them. While they’re not exactly numerous, this beastly species hound the father as he travels through their lands and beyond as he attempts to get home alive.

Along the way and between the moments of survival, the player will learn about this species and a conflict they’re embroiled in. All of this is portrayed to the player via environmental storytelling. There’s no dialogue to speak of beyond grunts and guttural, incomprehensible noises and there’s a bare minimum of cut scenes. Everything is communicated to the player via the world, the carnage you’re travelling through, the ghoulish enemy design, the choice of music and the way the NPC beings react to the father. The narrative in Unto The End is standoffish, asking the player to think about the world rather than having a story spoon-fed to them and it’s all the better for it.

The same sentiment can be said about the game play. Unto The End drops you into the game without a tutorial, any guidance or direction. You’re in this fight alone both figuratively and literally. There is a tutorial which can be accessed from camp fires (which also act as a manual save point) which aims and succeeds at teaching the player the frankly excellent combat included here.

Unto The End has a top class read-react combat system that is both intuitive and challenging. Foes will attack with a myriad weapons but following 2 routes – high and low attacks. These strikes can be blocked by holding the left stick up or down if the player can read the direction of the attack and respond in time. Block an attack and you can counter some enemies with your own high and low attacks – but enemies can block in the exact same way. Using the Triangle for high attacks and Square for low, the father can dish out his own damage – but button mash and you’ll get punished. The protagonist is more vulnerable half way through a swing so try to wildly attack and you’ll end up dead. It’s also possible to lose your sword if you take a heavy hit or if you roll into a wall (which is surprisingly easy to do when you’re panicked by a trio of horrible enemies bearing down on you). If you want to survive here, you’ve got to retrieve it in the heat of battle by grabbing it with L1. Some monsters have unblockable strikes, many of which will kill the father in a single swipe. In order to avoid these attacks, the father can also roll and duck with a button press. This will avoid attacks, effectively removing any damage effect until the father pops back up. If you’re quick, you can also interrupt attacks with a shoulder barge, with a thrown bone knife or single use spears.

While that might sound like an extensive set of offensive moves, Unto The End is brutally difficult. The father might look like a burly warrior but he’s relatively fragile compared to the monster’s he has to slay on his journey. Every single enemy in the game has the capability of sending the father sliding off his mortal coil from the lowliest goblin to the Ogre’s that fling a whole deer as a weapon. Mistime an attack or fail to block a thrust from your foe and that might be all she wrote for the protagonist. Mastering the blocking system is essential to survival but even with that nailed down, some of the beasts standing between the father and his destination can be a real test of skill and perseverance.

If it’s not the grizzly evils trying to kill you in Unto The End, it’s the world itself. Traps or unsafe environments can squash, stab and otherwise eviscerate the father in seconds and you’ll rarely see it coming. There’s a real Limbo vibe to parts of this game, shocking the player with deaths that are tough to avoid, even when you know they’re coming.

Thankfully Unto The End accommodates players who might not be the most skillful by having regular checkpoints to restart at. The game auto-saves progress often which means you’re not losing hours or even minutes of progress if you fall. Often, it’s just seconds or a single fight. This system encourages some pattern recognition and trial and error. Each enemy type has a specific tell they pull before a high or low attack. It might cost a few retries to learn them all for a specific enemy group but eventually, you’ll best them.

There’s one element of Unto The End that feels out of place in this regard – bleeding. Take some damage during a fight and the father might start to bleed. These wounds can be healed with consumables or at a fireside save point. If you’re in the space between these save points and have ran out of consumables, you’ll continue to bleed and eventually fall down and die. Here’s the kicker – Once you’ve begun to bleed, the auto save is deactivated. This would be a fun system if the fire save points were regularly spaced and easy to reach, triggering a race to get there before the cold embrace of death takes hold. That’s not the case. Bleeding is simply a prolonged death sentence in most instances as you’ll bleed out long before reaching somewhere to stitch yourself up. I kind of wish this aspect of the game didn’t exist.

Visually, Unto The End has this bold, clean, crisp art style that manages to portray a lot of depth with very little detail. The snow kissed cliffs and blanketed forests are at a stark contrast to the claustrophobic caves and dark tunnels that the father has to use a torch to navigate. This is a gorgeous game in its own way.

It’s also an incredibly atmospheric one. Whether it’s the nagging strings of the soundtrack or the bleak, stliffling view in the tunnels, there’s a palpable tension during combat and exploration. This is a game that knows how to build up a world and have you cut a measured and well paced path through it with branching optional paths for those who want to explore/like punishment.

There were a few technical issues I have to mention with the PS4 version of Unto The End. When outside of the cave systems, there were the occasional weird camera glitch which would randomly pull the camera to the other end of the level. It would hang there for a second and then return to focus on the protagonist again. This happened a few times and resulted in a few untimely deaths which was frustrating. There were a handful of graphical bugs too – nothing game breaking but noticeable, mostly in the space between rooms/caves or when using lifts with a lit torch.

These few niggles can’t spoil what is a very interesting and unique title from a husband and wife duo at 2 Ton Studios. I remember playing this game at EGX last year and being intrigued to see what it would eventually turn into. To say I am impressed with the final product would be an understatement. Sure, this game won’t be for everyone but if you’re a fan of tough but rewarding games that aren’t unfair or constantly cheap, this one is certainly worth a look.

As a cinematic platformer that borrows all the best bits from the Soulslike genre without being too punishing then adds its own unique elements, Unto The End is a triumph. The ‘bleeding out’ feels like it’s not utilised as well as it could have been and there are a few annoying glitches but the core game here is a stiff test and a very satisfying reward.