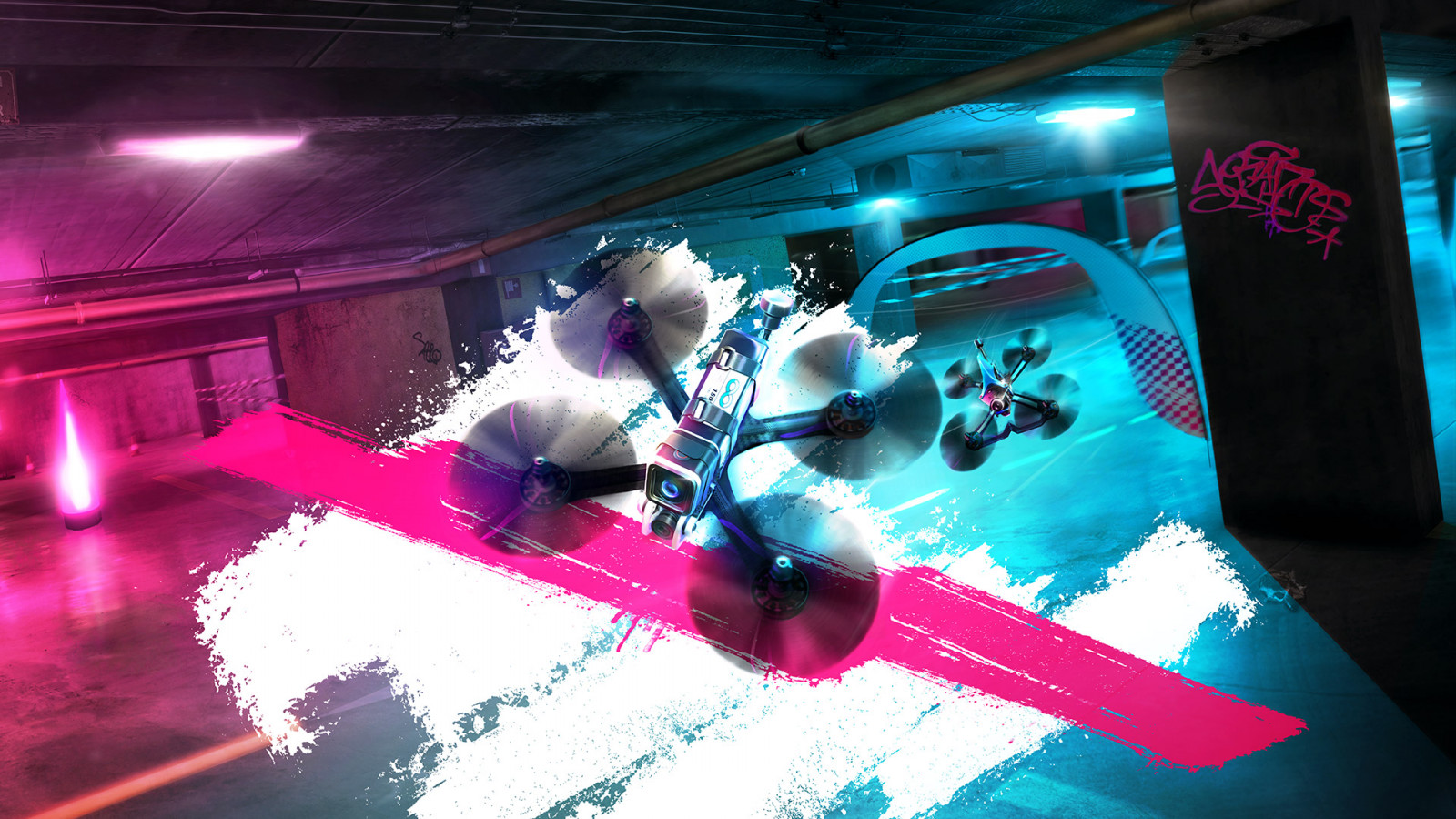 Upon sitting down to write this review, I found myself in a bit of a conundrum. Through the week I’ve been playing a fair amount of Liftoff: Drone Racing through rather gritted teeth, to such an extent that I’m pretty sure I don’t have any left to chew apples and pasta and things. Most unfortunate. You see, I’m fully aware that a game like Liftoff: Drone Racing will have an audience awaiting its release. Hell, the console launch demonstrates it’s attempting to reach a little further than its no doubt hardcore PC based audience. For them, this is a solid simulator for a hobby that one could consider rather niche, despite the ever growing popularity of competitive drone racing.

But me? If I never, ever see this game again I’ll consider my life fulfilled. I don’t think Liftoff: Drone Racing is an awful game. As mentioned above, it’s a stone-cold simulator made for fans, I just don’t like it. I can’t. I’ve attempted to force myself through it and despite being fully aware of what on earth FPV Drone Racing can provide to the greater western world and the privileged few who have the means to compete, I simply can’t bring myself to care one iota about this virtual recreation and as such, I never want to see it near my soon-to-be-retired PS4 Pro ever again.

What I learned about myself while playing Liftoff: Drone Racing is that I never want to own a drone as it probably wouldn’t last all that long in one piece. Thankfully, the game has a tutorial that’s detailed and offers enough detail to make you feel that, once complete, you’ll be able to compete at least a little bit.

I’ve spent a good few years playing video games where drones are controlled with the controller triggers and an analogue stick (up, down, look around), here though, you have to re-learn how video games work. Flying drones in Watch Dogs Legion is unfathomably realistic and Liftoff has taught me such things. Turns out there’s a dexterity to the movement, a dance to ensure your rather expensive flying camera doesn’t go pounding into the ground on first flight.

Fortunately during the tutorial your drone is indestructible, so you can smash it to pieces infinitely and you’ll procure nary a scratch on the drone. And it’s a good tutorial, featuring drone expert ‘Joshua’, who stares at you in a such a way that at any moment he’s going to want you to paint him like one of your french girls, but is mostly harmless and has the patience of a saint whilst trying to teach you how to fly a bloody drone.

Straight up, piloting a drone is not easy. Anybody that can do this in real life has my eternal respect because I’ve never wanted to throw my controller out of the window harder than when good ol’ Joshua was taking me through the basics. The control style mimics that of a real life drone remote, to an extent. There’s a far more casual mode which is where you bring up the drone, go forward, turn, go up and go down and it’s all fairly routine if a little fiddly at first. Fortunately the game is aware the controls aren’t the easiest so you get as long as you like to perfect the motion and learn the movements. Once that’s finished you can move onto ‘ACRO Mode’, and this is the spicy meat-a-ball that separates the weak from the..erm, drone racers.

ACRO Mode will turn your analogue sticks into a full on drone remote control, and it’s not easy to get your head around at first. I credit the game for taking *very* gentle steps to explain the intricacies of this particular talent. Joshua actually says at one point ‘I can’t believe you’re still here, I thought you would have given up by now’. Believe me, I wanted to. Many times. Did you know drones don’t just turn? They don’t. You have to lean it forward, adjust pitch and then yaw (essentially turn to face a certain direction) in order to move in the way you’re supposed to be going. The segment where you’re learning this will either break you or make you determined to get it done so you can show Joshua your fancy new skills that ‘s so wanting you to learn. He’s a good guy, no matter how many times you slam his drones into rocks.

Joshua is more than happy to explain to you that you’re not ‘the drone’, instead you’re seeing the first person view through a headset you’re wearing on the ground, so in ACRO mode there’s a real feeling of VR possibilities that oddly aren’t available here. I’m thankful in a way, purely because I’m not entirely sure how many times I would have been ill all over myself as a crash into the ground, unable to enjoy the moment it all clicks and you can fly through the air till your hearts content like a mechanical bird learning how to soar through the skies for the very first time. Those moments are where Liftoff: Drone Racing come alive and I begin to understand the appeal of a simulator that if I wasn’t given to review, I probably wouldn’t have ever touched.

And that’s when I realised the ACRO mode is for the pros. The ones who have been waiting on this release like it’s Christmas day and, you know what, more power to them. I nailed the ACRO mode and managed to get some good lap times down once I was free from Joshua’s clutches and was free to roam and begin a robust *from the gutter to the stars* career mode that gives rookies a hell of schooling on the history of the sport. The game certainly opened my eyes to a world I knew nothing about, and for those who are invested to see the fully licensed drone companies featured including DQuad, Armattan and Immersion RC will no doubt get a kick out of it.

The workbench tinkering is an addition for those who know what the hell they’re doing. Again, the game has a solid ‘onboarding’ experience, but it’s difficult to really get a handle on what you think is best for your champion drone if you don’t have the knowledge already deeply embedded,the same way jumping into Ultimate Team knowing nothing about football or its players would be a fruitless endeavour. Still, if you want to get all up in your drone and play with its parts and whatnot this is where to do it. The officially licensed parts give you a good idea of what you would want to look for if you were ever to delve into the competitive drone racing world in real life, with plenty of options to toy with.

Can I just take a moment to point out that the music is horrendous, playing like an evening at a party that only played songs that came second place in Eurovision for the past fifteen years. It was immediately switched off and frankly I’ve never been more grateful for a music volume button in a game before.

From a technical standpoint Liftoff: Drone Racing feels poorly optimised. Damn near every time you’re jumping through menus or attempting to begin a race there’s a loading screen. Before I ever got my hands on a drone I had seen six loading screens and whilst they weren’t particularly long, speaks to a larger problem of well this game could run on either next-gen hardware or any kind of SSD that would eliminate the issue.

Upon joining a race or attempting any kind of drone movement my PS4 Pro began wheezing and spinning the fan to such an extent I couldn’t hear my television. I couldn’t figure out what the game was doing in order to make the Pro buckle under the pressure. The visuals are definitely nothing to write home about, bland and miserable mostly with framerate issues and, astonishingly the same week as next-generation consoles launch, pop-in. Pop-in. And the Pro was having none of it and wanted seemingly to take off and become a competitor to my drone champion that kind of noises it was making.

It was happening on certain courses more than others. There’s an indoor garage track that was the worst culprit despite being an internal, smaller circuit. Whenever i was racing on an outside track, particularly the forest and the construction site, it was still pretty bad but calmed itself down after a couple of minutes. What is this trying to run? Is it just meant to be an added effect? My PS4 Pro wasn’t a fan, so to speak.

And that’s about where I land. I’m not going to recommend Liftoff: Drone Racing to everyone, I feel like you really need to have at least a basic knowledge of the real-world sport to garner anything from this experience. If I’m looking at Liftoff as purely a racer? To attempt to sell it when the likes of Dirt 5, WRC 9 and hell even Wipeout are available seems like a fool’s errand. It’s just too intricate, too reliant on a control scheme that isn’t the fault of the developer, but casual gamers are going to have a tough time wanting to see this one through when the alternatives offer a far more straightforward racing experience.

Still, if you have any interest in drone racing you can’t really go wrong, as there aren’t a huge number of alternatives that offer this level of depth in the genre. I can appreciate Liftoff: Drone Racing for what it is and what it’s attempting here. I hope it gets patched soon so fans can get a more enjoyable experience and I hope they enjoy it because on the surface, it’s about as good as a game of this ilk could wish to be, and that’s fine by me. I just don’t have the inclination to jump back in. Especially right now.

But thanks, Joshua. I’m grateful he didn’t give up on me.

LiftOff: Drone Racing is made for the fans and that’s a solid enough reason for me to recommend it. If you were waiting on this one, you won’t be disappointed.

Liftoff: Drone Racing is out now on PS4 (reviewed on PS4 Pro) and Xbox One.