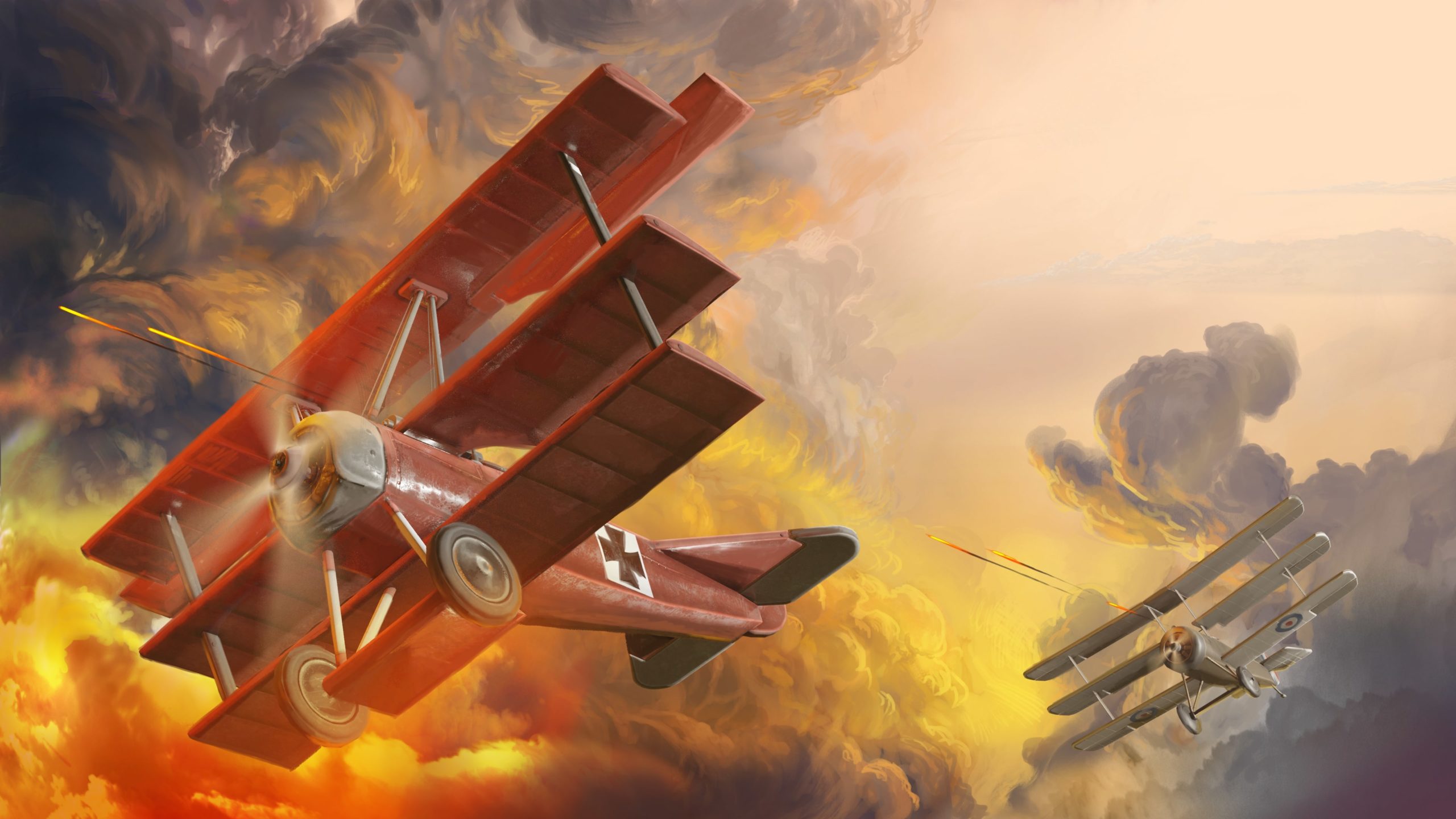 It's got more colour than the actual war did. It's got the explosions and cool dogfights, what more could you want? Well, how about some longevity that doesn't dull into repetition...

A fun and arcade take on WW1 dogfights, Red Wings: Aces of the Sky is a quirky experience. Does it last though? The Finger Guns review.

I can quite confidently say I know very little about the first two World Wars (he says, expecting a third). Oh sure, I know the basics: we saved the day, Germans bad, that’s not really Tom Hanks at the start of Saving Private Ryan. The only Red Baron I knew was from Snoopy. Thankfully, Red Wings: Aces in the Sky has me covered.

Telling the tale of the real Red Baron, aka Manfred von Richtofen, Red Wings gives us the abridged look at his formative years in service. But rather than the standard “Your mission is to eliminate the Baron”, you actually get to fly as part of his team. You also get to fly against him, as Red Wings pits you on both sides of the war throughout its story missions.

Yet far from being another over the top war-fest like Call of Duty, or a more bleak tale like Valiant Hearts, Red Wings hits a definite middle ground. It’s fun and has a massive arcade bent about it, yet the interluding cutscenes paint both the hope and despair of each opposing force.

The real question is whether its mission structure can carry it, or if the repetitive nature starts to wear down the interest too soon? So chocks away, or whatever the German equivalent is, and we’ll find out.

Take To The Skies!

The storyline behind Red Wings: Aces of the Sky isn’t too much a head scratcher, thankfully. There’s no deep dive into the horrors of war and the toil it has on man, or the political ideologies of each side.

That you do get to play as both sides is also nothing inherently new in war games, but here it works quite well. To the Allies, the Red Baron is seen as a vicious and efficient enemy pilot. To his own squad, however, he’s revered as the hero he would rightly be for repelling invaders.

Missions are broken up with interludes of pilots writing back home, telling tales of victory or the struggles. Played out in black and white comic book form, complete with plucky voiceover, it gives a humane glimpse of what went through the minds of both sides. But in terms of depth and insight, it’s nothing you haven’t seen done better in other games.

We all know the grand outcome of the war, and there’s always plenty of further reading out there if you need it. But of course, you’re not reading this review to find out about who won. You want to know if it’s worth taking to the skies or not.

Take That, You Blighter/Pig Dog!

In the nicest terms, Red Wings: Aces of the Sky isn’t a very difficult game to play. That’s not damning indictment or anything, it’s just not going to give Flight Simulator or War Thunder anything to sweat about.

You control your aircraft, one of the dozen or so (including the Fokker Dr. I, the Red Baron’s plane) with one thumbstick, whilst varying speed with the other. There’s no complex yaw and rolling mechanic here. You pitch and turn with the left, whilst the right lets you either turn on a dime or cast wide arcs to return to the battle…air(?) with.

Shooting is tied to your flying, which took me a while to get used to, especially off the back of Star Wars Squadrons. I’ve been conditioned by so many games to use left for movement and right for aiming that when Red Wings tied them both to the left stick, my brain went, “Bwuh?”. Shooting is pure Call of Duty, though: fire with the R2 (or equivalent) button, zoom in with L2.

But it’s the aerial maneuvers that baffled me, initially. You can’t loop the loop, nor can you barrel roll, or even do that half loop/180° thing that has you turn to face your pursuer. Well at least not manually, anyway. These are your skills, mapped to the face buttons. That’s right, barrel rolling and the quick turnaround/comeback are individual skills with their own cooldowns.

It takes a while to get used to, but before long you realise that that’s part of the arcade fun. Taking out a few fighters whilst being chased by another, watching your skills reset only to turn to face your assailant and barrel rolling past him is a delight. Sure, a more “serious” game lets you do these on the fly (pun intended), but Red Wings: Aces of the Sky is all about the cool, arcade-style bursts of fun.

The View From Up High

In terms of core gameplay loop, the majority of missions in Red Wings is based on what I’ve described above. The objectives rarely vary from taking out a set amount of fighters or balloons, which can get stale after a while.

Fortunately, there is a bit of variety to break up the monotony. There are time trials, under the guise of leaking fuel, that requires you to hit checkpoints before time runs out. It’s novel, especially if you’re a completionist and you want to hit the fastest times.

The other novelty are the bombing run missions. Played from a top-down perspective (pictured above), these add a bit of fun to proceedings. Whilst they look like 1942 top-scrollers, you actually have freedom of movement to hit your objectives. Not complete freedom, but enough to move 360° and avoid artillery fire.

Assemble Your Squadron And Look Good Doing It

If you feel that the arcade grind is too much for you, there’s always the option to enlist a friend to tally up some kills with. Couch co-op only, but that’s to be expected with a small arcade game.

Having a friend helping will make mission targets slightly easier, in theory. Finishing in a quicker time or with a higher score nets you more stars on completion, which can be spent on upgrades. These range from shorter cooldowns on abilities, to more fuel capacity in your aircraft, as well as new liveries for them too.

All in all, it’s a pretty fun time. Well, as fun as war can be. It isn’t taking itself too seriously, what with the flashy finishing moves you can pull off on your enemies. It doesn’t delve into the realms of realism and its visuals are appealing enough.

Yet it doesn’t get a complete thumbs up from me…

As Red Wings: Aces in the Sky is essentially an arcade game, the gameplay can get repetitive. And that’s fine, as every game gets repetitive after a fashion. However, most games try and alleviate that repetition with a different narrative track, or some kind of direction change.

Red Wings doesn’t, unfortunately. Rinsing and repeating the same mission structure gets stale after a while, as does the whole “grinding for stars” mechanic. Do I really need to push myself to frustration just to shave off a fraction of machine gun cooldown time?

It also becomes a tad painful when you start mouthing along to “Enemy reinforcements incoming” sarcastically when you shoot a balloon down. Seriously, it’s very predictable and very annoying.

But again, being an arcade game, I shouldn’t be too harsh on it. As someone who used to grind the Trials games endlessly, I can’t criticise a game for its repetitive tendencies.

Once More Back Into The Fray

Take my cynicism away, though, and Red Wings is actually pretty good fun. My grumbles above are just gripes towards an otherwise fun game to play.

It doesn’t have much in the way of depth or exposes the starkness of war, but that doesn’t matter too much. It’s an arcade shooter about war planes pulling sweet tricks and finishing moves. That’s pretty neat, right?

It’s got a stylish, pseudo-cel shading look to it, full of brightness and explosions. Sure, the dialogue is a bit corny and the battlefield commentary becomes tedious, yet it’s endearing, if anything.

On the whole, it won’t blow your socks off for originality, but there’s fun to be had if you’re into silliness over realism. If you can enlist someone to help with your war then even better.

It’s not a massively deep game, with a skills-and-stars upgrade system cribbed from many a game. That being said, Red Wings: Aces of the Sky is a fun little adventure in a First World War mold. Taking to the skies has never been so colourful.

Red Wings: Aces of the Sky is available now on PlayStation 4 (reviewed on), Xbox One, Nintendo Switch and PC.

Developer: All In! Games
Publisher: All in! Games

Tags: All In! Games Red Wings Aces of the Sky