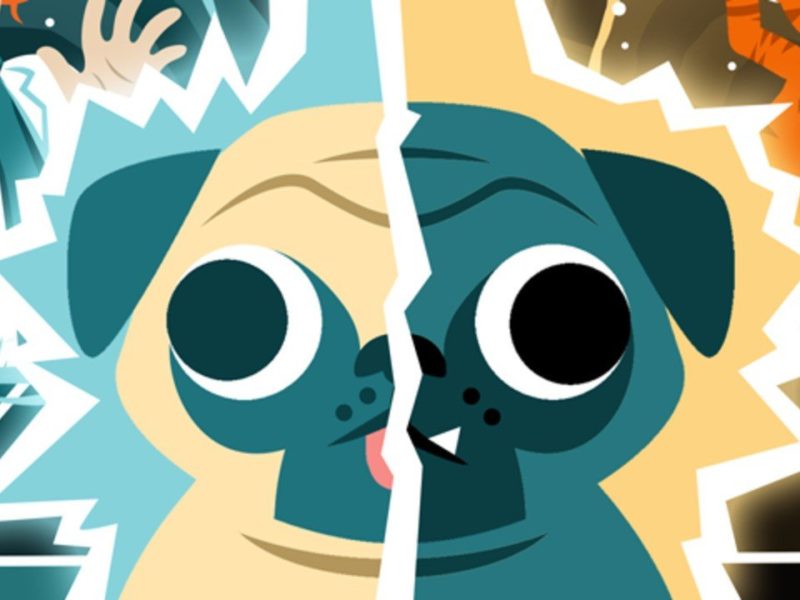 I can’t remember the last time I failed during a video game tutorial. These sections of games that are there to teach you the controls and how to play are usually pretty forgiving. I died during the tutorial section of Double Pug Switch. In fact, according to the Steam achievement unlock statistics, 75% of players do. If the purpose of a tutorial is to teach the player what to do, you could say that this particular one is a massive success. Sure, it shows you the very basic control scheme but more importantly, it demonstrates how you’re going to die so, so, so many times during this game’s duration.

Double Pug Switch is a 2D autorunner but one that’s unlike anything you’ve played before. There’s only 2 control inputs in this game – Jump and Switch. The jump button speaks for itself but the Switch action is unique to this game. You see the Pug protagonist was sucked into a portal after the games somewhat antagonist Whiskers the cat does what cats do best. The feline knocks 2 hazardous experiments off the counter in their scientist owner’s lab and the pets get zapped into a portal. This portal has split the Pug into 2 mirrored versions of one another that exist in 2 different planes of existence. These different planes of the level overlap one another and form the path forward – but only half the level will be active at any one time. Any part of the level that’s partly translucent and a different colour to the background don’t exist in the current plane. Leap onto them and the Pug will just fall through it. To pull them into existence, you have to switch planes. This forms the core loop for Double Pug Switch. Leap over all manner of obstacle while switching dimensional planes in order to keep prevent doggy doom.

The input systems might be simple but traversing the levels of Double Pug Switch is anything but. The game begins at a difficulty level akin to Super Meat Boy and goes up from there. Millimetre perfect jumps, platforming sections that require switches between each leap and more spikes than you’ll find in a field of cacti mean this poor Pug will die often. As you progress, new platforming elements are added to the mix such as gates which will force a dimension switch on the Pug, raising the complexity further. Each level has a few checkpoints that alleviate some of the difficulty but make no chew-bones about it, this is one of the most difficult games I’ve ever played.

Part of that difficulty comes from the tackiness of the jumping. A simple tap of the jump button triggers a small leap but hold the button down and the Pug will jump further. The trajectory of this jump can also be controlled. Let go of the jump button and you’ll start to fall earlier. This takes quite a bit of getting used to as the puptagonist moves at a pretty rapid pace and when you’re having to switch planes mid-jump, it’s very easy to get your fingers tied up.

It’s here that I’d usually say that a game like this lacks play testing. A game this difficult is usually the result of not having enough players outside of the development team test it. I don’t think that’s the case with Double Pug Switch and I think developers The Polygon Loft knew exactly what they were doing with this game. This game was more than a little tricky when I sampled it at EGX a few years back and seems to harder now than it was then. They knew they were making something that is insanely difficult and packed with borderline sadistic design elements. Those elements of the Sonic the Hedgehog games when a spring propels the hedgehog directly into a pit of spikes? Double Pug Switch is a game made entirely of those moments. You can see the design decisions where the developers looked at a series of jumps and said “This is difficult but if I put this spike just *here* it’ll send it to another level”.

The effect this has Double Pug Switch is that it makes successes feel well earned. After dying hundreds of times on one particular level, I literally danced around my living room singing when I’d finally cleared it. This was only in the second of the 10 zones in the game. Having done it once, I tried again – this time aiming to take a different route through the level as branching routes are quite common in this game. Some routes are easier but there are optional coins and collectables to pick up on harder routes. Pick up the coins and you can spend these on clothing for your Pug. Why? Because it’s cute to put a dog in a pirate bandana and glasses, I guess.

At the end of each zone in Double Pug Switch, you have a boss battle against Whiskers the cat who is now called Lord Sker. The boss fights I’ve been able to experience have been pretty basic and are some of the easier levels in the game which is actually a bit of a relief, to be honest.

Then you’ll hit a wall again. There are difficulty spikes in this game that pull the rug right from beneath you and crush your spirit to dust. I’ve always made a point to at least attempt to finish every game before I write a review for it but I’ve only reached the 3rd area of Double Pug Switch. I doubt I’ll ever see anything further than this area. I’ve died more than 500 times on a single series of jumps that are so nefarious that after hours of trying, I’ve been left cackling to myself in frustrated hysterics. The singular reason why I’ve kept coming back rather than simply rage quitting is that every failure, you’re presented with a little animation of the dog looking sad, complete with wobbling bottom lip. If it wasn’t for this, I’d have quit hours ago.

I like a challenging game but there’s a fine line between being a fun test and being frustratingly difficult. Double Pug Switch passes that line and can barely see it in the distance. The dimension jumping mechanic is a fun one but it feels like it has been squandered in a game too fiendish for its own good. The basic art style and enjoyable soundtrack, while cute and inviting, aren’t enough of a incentive to push through the mountainous difficulty spikes this game contains.

You’ll need dogged determination and the reflexes of a cat to get anything out of Double Pug Switch. It’s inventive dimension switching mechanic is lost in a sea of spikes and overtly difficult levels that are tough to fur-give.