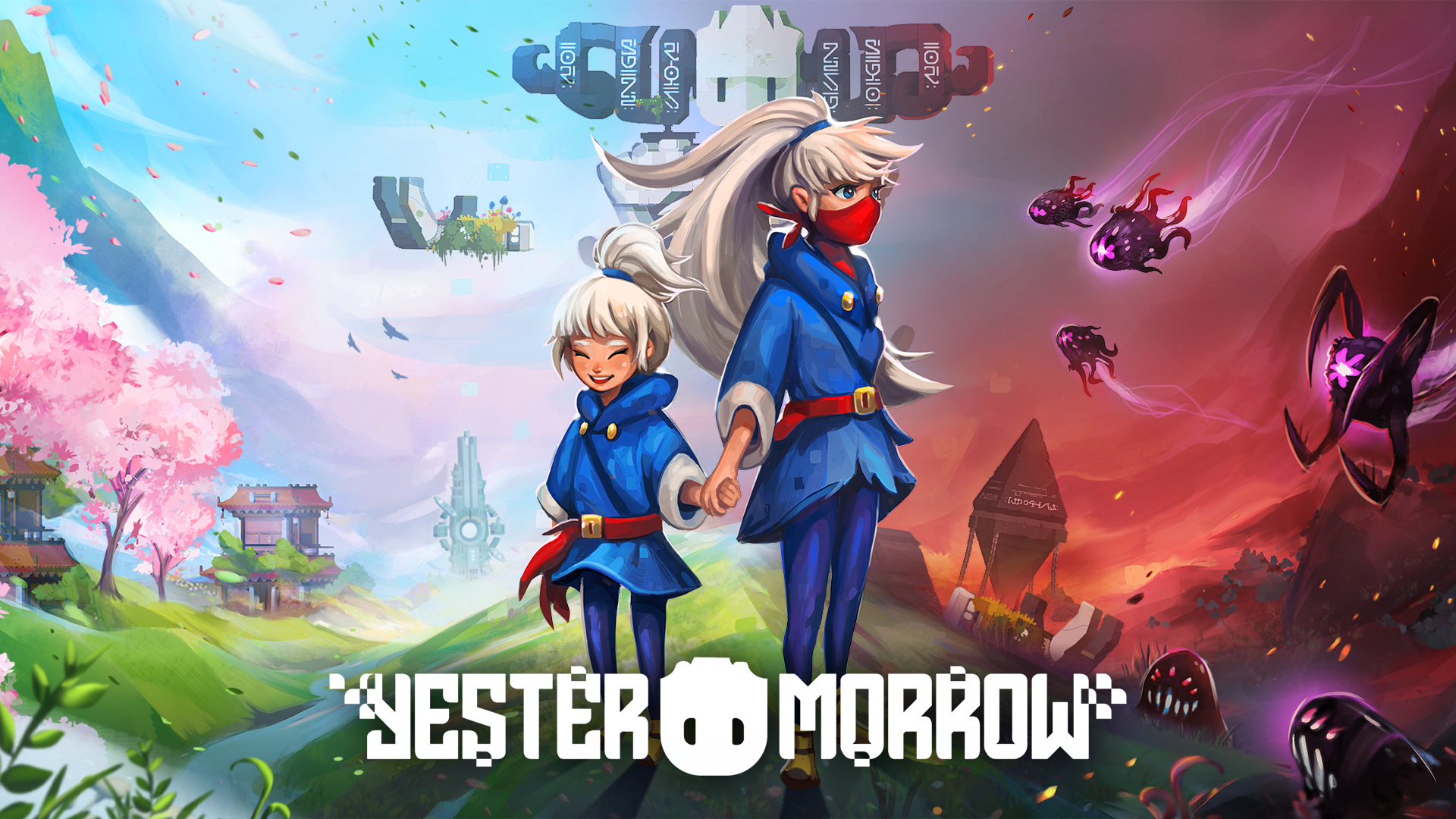 Toby Andersen
Play as a ninja child and a ninja teen, who are both the same heroine because of time shenanigans, in Yestermorrow, a nice new pixelart platformer that's close to being The Messenger for kids. The Finger Guns Review:

Play as a ninja child and a ninja teen, who are both the same heroine because of time shenanigans, in Yestermorrow, a nice new pixelart platformer that’s close to being The Messenger for kids. The Finger Guns Review:

I had the pleasure of catching a demo of Yestermorrow during one of the Steam Festivals this year and found it pretty intriguing. An Asian-inspired pixelart platformer, with an art-style that looks like an homage to Fez, one of my all-time favourite indie games, just without the rotating mechanic. I hoped that come release it would deliver on that promise and be a shoo-in for a platforming classic.

Yestermorrow takes some healthy inspiration from Zelda, complete with health hearts, bombs and lots of Temples of Time only as a platformer rather than an RPG. It features a time mechanic that thrusts you forward or backward between two different periods, one where the world is pleasant and free, and the other, years later, where it is corrupted, and humanity is enslaved by shadows.

It’s charming, cute and runs beautifully, but is the full game one of platforming perfection, or a time you never want to travel back to?

In Yestermorrow, you play as Yui, a spirited and rebellious young girl with white hair, who lives in a prosperous but very provincial village in an Asian-inspired world. Every year a grand ceremony is held, the Festival of Light, celebrating the triumph of the light over the darkness, and the Everlight that the village worship. But this year the ceremony is interrupted when a horde of dark beasts arrives and Yui’s father casts a magical barrier protecting the people, sending Yui to the Temple of Light for help from the Grandmaster. Yui doesn’t make it, falling into an ancient pit, and awakening a huge otherworldly guardian, like a creature from Pan’s Labyrinth made massive.

Flashcut to Yui waking up as a teen, the shadows won and have been around for years, and we learn that her father went missing not long after the attack all those years ago, while out looking for Yui. Not long after this, Yui’s mother and brother Haro are kidnapped by shadows and Yui finds her way to the Guardian again, only this time he gives you the ability to travel in time. Maybe there is a way to reverse what’s happened, find Yui’s father and rescue her brother and mother from the shadows.

It’s a simple enough setup, not a plot that will rock your world, but also not a bad one at all. Yui is a likeable heroine and the premise is plenty to get you bouncing, bombing and platforming between past and future to your heart’s content. The rest of the plot is really just go-here-do-this, complete the five or so temples, and the three islands, and save your family.

At heart it’s a simple platformer that uses the Guacamelee style swapping worlds mechanic to change-up gameplay and the look of the world. Instead of swapping dimensions on the fly as in Guacamelee or Outland, Yestermorrow has you seek out time portals that once activated, will change the scenery and world and warp you into the past or future. In the past Yui is younger, has shorter hair, and if I’m not imagining things, has a slightly shorter jump. The landscape is peaceful and uncorrupted and the machines work. Fast forward into the future, and Yui is older, has long hair, a nice ninja mask, and a larger jump ability. The shadows have corrupted the world, buildings and machines have crumbled or don’t work, and the creatures are now far more dangerous.

You play as both Yui’s forging ahead as one, before needing to change timelines to make progress. The main setup is that you will often be faced with an immovable obstacle in one timeline, or just a completely dead end, such as a crumbled doorway to a temple denying access, or a rusted up machine, and you will need to find the nearby time portal and then continue onward in the other timeline instead. This is about as complicated and used as the mechanic gets, which is a little disappointing – the platforming in Yestermorrow is very linear despite having a timeline changing mechanic, and in most of the game it’s simply change the timeline and continue on your way, often in exactly the same direction. When it was that simple, I started to wonder what the point of it really was.

In Guacamelee, the dimension hopping is tied to on-the-fly button presses requiring you to change dimension in the middle of fights, and to achieve almost any of the platforming puzzles. In Yestermorrow, there’s no moment to moment use of the time mechanic, it is not required to fight enemies or in actual platforming sections. Instead it is just there to open routes in the linear path Yui must take to succeed.

You will need to seek out the three Island’s Guardians over the course of your playthrough. Each island offers eight or so unique areas to explore, including five or so Temples, which involve the more challenging platforming. That said, for the most part Yestermorrow is not the most challenging of platformers – there are a couple of sections you’ll need to repeat a handful of times, but for the most part, save points are plentiful and respawning takes seconds. I rarely died more than three times even on the toughest sections the game had to offer. This is not by any stretch comparable to Celeste or The Messenger for difficulty, although once you have dash and double jump, it will feel like Celeste.

The five temples do have the best platforming though, and the Temple of Rhythm was my favourite, offering a twisting gauntlet into its Guardian’s abode, that was full of satisfying platforms and wall jumps, but all just the right side of too hard. For those who do fancy a taste of more challenge, there are a number of trials scattered about the islands, which will test your skill and dexterity a little further. By the end of the Ice Island, the complexity and demands on your skills have risen to the level of the simpler parts of Celeste.

Yui acquires a series of skills as she beats the bosses, usually at the end of each temple. Double Jump, Dash, and Mega-Stomp change up the platforming and are often needed for the next boss. There is a light skill, which lets you light up lanterns and is probably the only one tied to the Everlight idea in the premise. Bombs are also your only real means of doing damage, so for a lot of the game you’ll feel like Link if he never opened any other chests after getting bombs. Lastly in the final island you get a 3 second time freeze skill, which was a welcome change to gameplay towards the end and made the last sections more interesting all over again.

Don’t expect a metroidvania. There is no real back-tracking needed apart from in a few small cases, and there is no massive 2D world map of the like in Hollow Knight or Ori. You collect parts of a map as a collectible as you go, but it really just fills in the parts of a simple picture of the island.

Graphically, Yestermorrow is really pleasant, and its colourful world, full of ancient tech and Asian-inspired aesthetics, really drew me in. It’s got a lovely pixelart style and much of the landscape has this chequerboard effect that really gives it its own look and helps it to stand out in a crowded genre. Yui and her little red mask are cute and she makes for a satisfying ninja and the three main islands of forest, desert and ice provide enough of a difference from each other to not just be colour-palette swaps, even though the gameplay is largely the same across all.

Yestermorrow has a pleasant eastern soundtrack full of twanging zithers and drums that fits perfectly with its Asian locales. It’s quite ambient for the most part, rather than in your face, but there are some tracks that ramp up the drums during boss battles. However some of the music in the desert island and the ice islands, in the broken and corrupted future scenario, are pretty morose and sad pieces, and when left repeating over and over while you play, started making me feel pretty down during those sections.

I didn’t see that many glitches during my playthrough of the game. Controls are responsive and tight, essential in a platformer aiming for that Celeste style sweet spot. The only issues I had were around the Dash command and dash doors being a little glitchy, often not requiring you to actually use dash to get through them.

Yestermorrow is a satisfying platformer of the type popularised by Celeste recently, however it does not have the depth of story or technically interesting gameplay to really be compared to that classic. It is however a great game in its own right that will please any fan of pixelart platformers.

It’s more accessible for more players than some of the recent very difficult platformers, and I would say, with the simple temple seeking story, it seems to have been aimed a little younger than I first thought when I played the demo. Because of its linearity and focus, it is simple enough to complete in around 8-10 hours, and never stops moving forward or causing you to lose track of where to go, which adds to how engaging it is.

A satisfying platformer aimed at a younger age group, Yestermorrow is memorable for its aesthetics and inspirations. However it’s gameplay doesn’t really do anything we haven’t seen before, and fumbles what could have been more interesting uses of its Everlight and time-based premise.