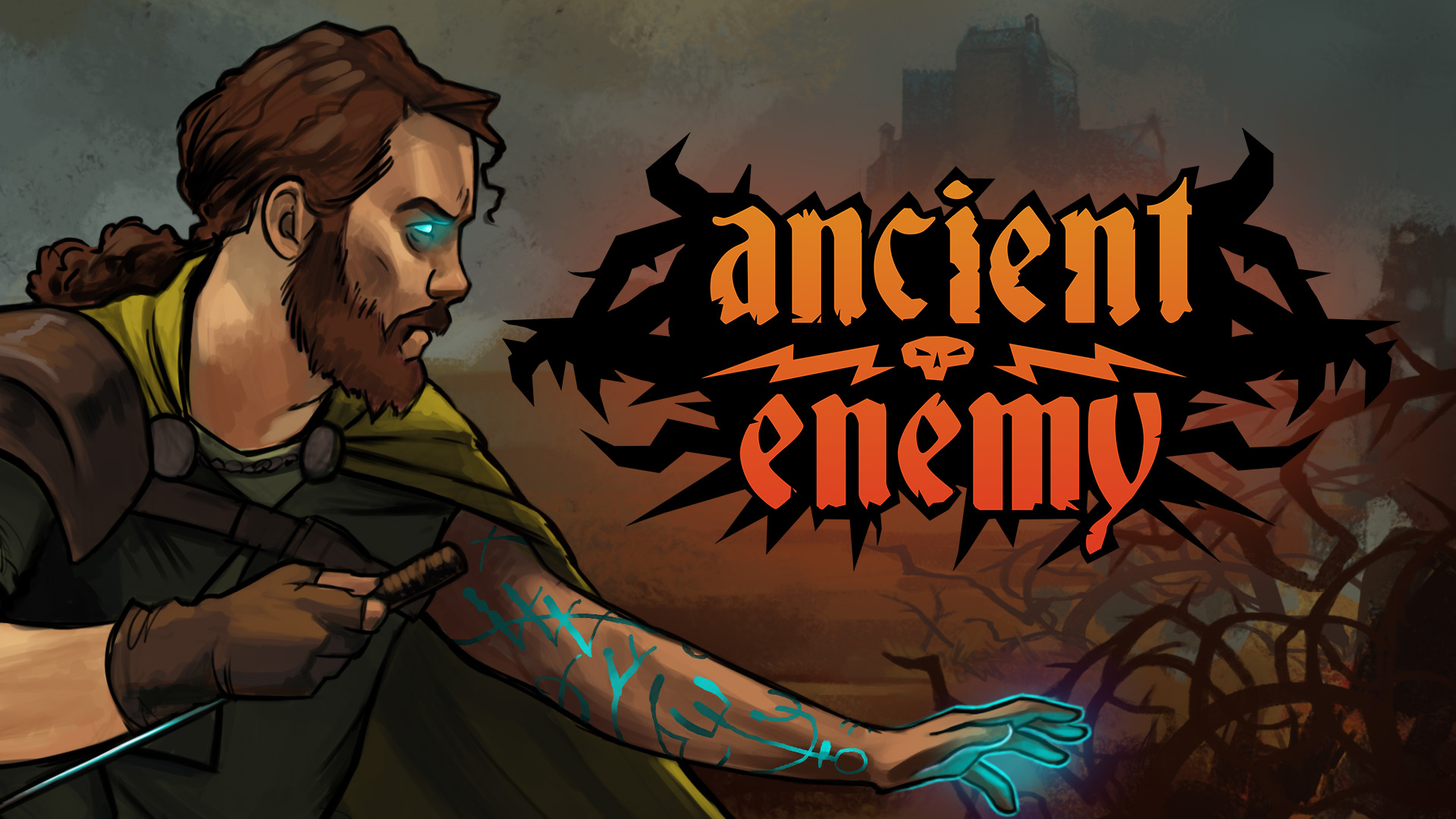 A clever twist on a classic card game which is then blended with an RPG, Ancient Enemy is a zen yet brooding experience. The Finger Guns review;

A wise movie police officer once said “Solitaire is a lonely man’s game”. In Ancient Enemy’s case, Solitaire is a lonely mage’s game. You play as “The Mage” who has woken from a hundred year long slumber to discover that the forces of evil have already won and the world has been decimated. Fields are now baron. Forests are corrupted. Places of worship are nothing but ruins. Now he’s off on a quest to defeat his old enemies, save the land and get some measure of revenge in the process. Each step along the way, The Mage narrates his journey across the grim and painterly land while facing off against all manner of evil…

Ancient Enemy is made up of 2 types of a Solitaire variant. In both types of game, there’s a Tableau of cards displayed on screen. Some of them are face up and in play while others are covered by other cards or face down (or both) and aren’t able to be played. Just like solitaire. The core concept of both types of game here is to choose cards which are 1 higher and lower in number than the card currently in your hand (displayed in the bottom centre of the screen) regardless of their suit. As you choose cards, those underneath them come into play. Kind of like solitaire.

The other type of play is a turn based RPG card battle, kind of like Magic the Gathering, that ties the cards you choose from the tableau to The Mage’s abilities and attacks. The Mage can have 3 abilities available at any one time (which can be customised before battle) that correspond with the 3 suits of cards in the tableau – a Yellow dagger for physical attacks, an orange lightning bolt for magical attacks and blue squiggles for defensive spells. In order to use these abilities, you’ll need to charge them by selecting enough cards from the matching suit. Once you’ve played one of your abilities, either attack or raising defence, the player’s turn ends and the opposition – all manner of man and beast – gets to have a turn. The UI always shows what your enemy is planning to do next so that you can plan accordingly – if they’re about to attack with devastating power, it’s wise to raise your appropriate defences or you’ll end up losing a lot of health. Similarly, if they’ve left themselves defenseless but are planning to raise their stats next turn, it’s sensible to go on the attack.

There’s a tonne of strategic depth here to get your head around. There’s special cards which can be played when they’re unveiled – a card which increases your defence for a round, a card which does instant damage to your foe, a Wyrm card which acts like a free card and energy cards which repower your special abilities (more on those in a second). Some of the tableaus have locks which need a key card. Others have explosives which, when lit by a torch card, blow away the top layer of the cards in play. The longer you combo card selections during a turn, the greater the value of your ability cards. String together 20+ card selections from the tableau in one turn and you can take a 5 damage attack and transform it into a 15 damage attack. Then there’s the special abilities, single use per match cards (again, customisable from an ever expanding library) that can do impressive things. Transform a card into another which is 1 above or below your hand card, transform it into a Wyrm card, destroy a card, completely reshuffle the tableau – these special abilities can completely transform a slim looking round into a 1 hit kill. Learning all of this and then put it to use is quite a joy.

Ancient Enemy isn’t the longest of games either. I clocked in just under 7 hours to complete the game on the Normal difficulty. The game is broken up into 11 chapters, each of which has a number of fights and Solitaire style games linked together across a map.

Those 7 hours were enjoyable though. Each chapter is punctuated by a boss battle which, in traditional video game style, will become a grunt later in the game. Towards the end of the game, the enemies have so much health that they can absorb a lot of punishment. It’s here where Ancient Enemy really comes into its own. In these latter fights, you really have to strategise based on what’s going on – do I attack now, even though there’s a few more cards I could play, or do a I save them until next time so that I can use them to bolster my defence?

Ancient Enemy looks excellent too. It has this hand painted feeling across the backgrounds, akin to iron age visages of ruins, swamps and forests. They’re the kind of images you wouldn’t mind hanging on your wall at home. These are in stark contrast to the sharp art work of The Mage (who definitely looks as though he’s about to go toe to toe with Kratos in the next God of War game) and the enemies he comes across.

There’s obviously a lot of imagination that has gone into the enemies you face off against here. The obligatory skeleton warriors and hooded rogues are joined by fungus infested boars, Frankenstein’s monster-esque Sewn Warriors and giant hellhounds. These are brought to life in really pleasing art work with some basic but effective animations during attacks.

So, Ancient Enemy is a chilled out take on Solitaire underneath a RPG card battler. It’s not the longest of games, the narrative is a little rote and if you really dig into the mechanics early on, you can find combinations of attacks and special abilities that make the game a touch too early. That being said, it looks fantastic, sets a brooding tone through its music and writing and, as card battlers go, is really quite enjoyable to play. This game won’t be for anyone but if you’re into the niche, or you’ve enjoyed Grey Aliens other games like Shadowhand, this is certainly worth a look.

Ancient Enemy is available now on PC via Steam.