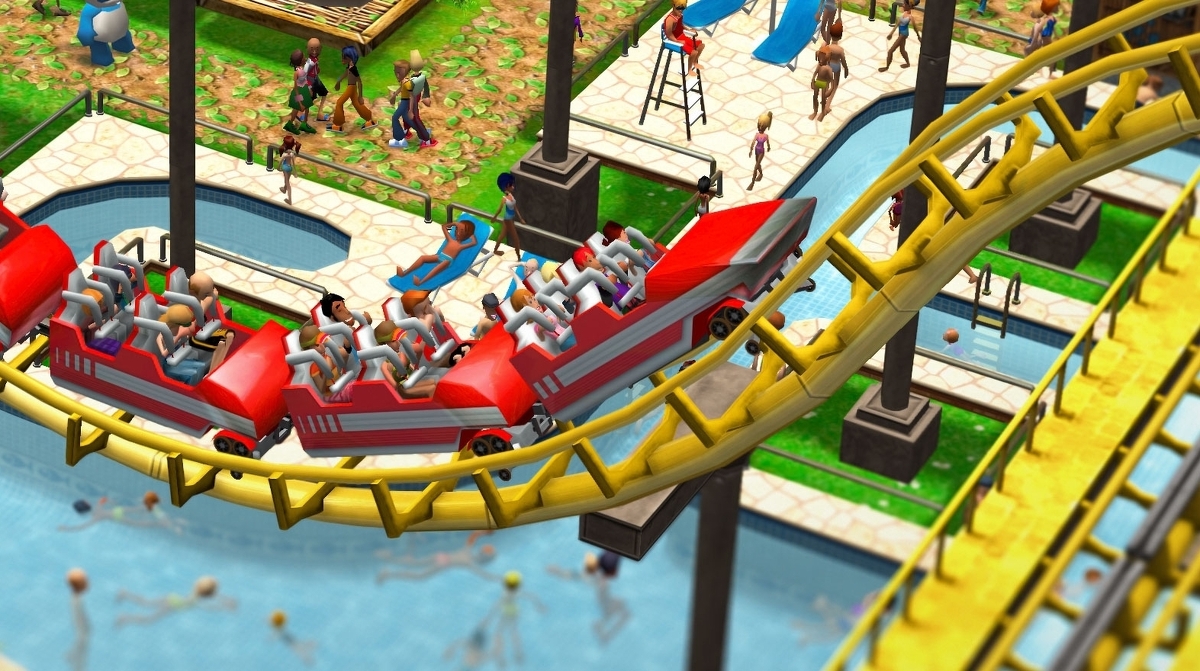 RollerCoaster Tycoon returns to our lives with nary a scratch, though Switch may not be its rightful home. The Finger Guns Review;

There’s something to be said that RollerCoaster Tycoon can return in the year of 2020 and the entire gaming industry not bat an eyelid. Sure, we’re used to old franchises returning in some form or another, whether it be remasters or remakes or collections of age-old games we have a yearning to play to remind us of simpler times, but RollerCoaster Tycoon 3 landing on Nintendo Switch (and at the time of writing, free on the Epic Games Store until October 1st) rocks up with few improvements and a visual style barely improved from its original release like it’s not dropping in the busiest gaming season in years. You have to admire the tenacity.

RollerCoaster Tycoon 3: Complete Edition then is exactly what it says on the tin. It’s the full package of a sixteen year old theme park simulator including its expansions in the palm of your hand. If you’re unfamiliar – though the clue is really in the title – you’re tasked with opening and maintaining your very own theme park (or doing your darndest not to run an already established park into the ground), which effectively puts you in charge of designing some white knuckle roller coasters, maintaining the happiness of your guests so they keep coming back and raising the value of your park whilst continually updating its attractions. It’s a simulator in the realest sense and it’s just as difficult as it ever was back in 2004.

Again, the clue is in the title, but the most fun you can have in the game is designing your very own roller coasters. It’s the mechanic that made the series stand out against the competition all those years ago, and whilst you can place ready made coasters across your park, there’s little that’s as exciting as your wildest coaster ideas come to life and seeing them work. There’s a real joy to be had upon completing your first ridiculous, logic-defying coaster for your guests, the best trick the game pulls is making you want to try out your own creations, whether it be your coasters or jet-ski courses and custom tracks for your go-kart rides. Fortunately you’re able to ride your own creations in full 3D(!) and it’s a huge highlight.

Your ultimate goal is to become, well, a tycoon. To reach that heady goal requires an awful lot of maintaining, hiring, firing, cleaning, tidying and generally ensuring everything away from the thrills and spills of the coasters is running just as smoothly. It’s not all fun and games running these damn theme parks, you know. Park management is the busywork of the game but it’s here where the addiction begins to creep in and you find yourself losing hours to hot dog stand placement and where plants and flowers should go. Near the restrooms or closer to the eateries? Does every ride have a path leading up to it so the guests can actually get on? Is there enough trash bins and janitors around to clear up vomit and spilled drinks? It’s a persistent juggling act and just when everything is stable and secure, it’s not long until maintenance is called to fix a ride or clean up something that should never have left a human body.

And the addiction creeps in because everything before you has been made by you. This is your theme park and you want it to be perfect around the clock, so leaving it just to zoom out and stare at all the rides is certainly fun, but it’s not long until you’re called back to address an issue, and you don’t want them bad reviews of your park. It’s your park, You’ve designed it from the ground-up, I can’t leave it for a second.

You may get a message relayed back to you that there aren’t enough food vendors in the park, so hopefully you’ll have enough capital built up to ensure food and drink isn’t something that guests will be going short on throughout their stay at your glorious funland. It’s a typical trope of the genre, but it doesn’t make it any less invigorating when you see your numbers rise (money, guests) and you’ve managed to pull it off.

The big question I had before jumping into the Switch version of a beloved ‘built-for-PC’ game was a typical one – how will this translate to a controller? And not just any controller, two Joy-Cons? I’m happy to report that it just about works well enough that you won’t be pining for a mouse and keyboard return just to get that fix of moving around the screen with such ease. Yes, of course the optimum way to play this is with a mouse, and as mentioned above, it’s free on EGS at time of writing so both versions were tested and it’s clearly the PC that wins out in terms of control but there’s been an admiral job done here to ensure RollerCoaster Tycoon 3 feels at home on the Nintendo Switch. It doesn’t, but it’s closer than most. It’s no Two Point Hospital mind, which was ported with such dedication to the ‘controller problem’ that if you didn’t know differently you’d be hard pressed to believe it came out on PC first.

And it’s not the only real misgiving to be had with this, a straight port of a sixteen year old game. It’s only really for the purists. The fans of the original will lap this up – my partner let out a squeal when it launched as it was a game she had played as a teenager for months on end -, but there’s frustrating ‘old video game’ mechanics that may leave any newbies with a sour taste in the mouth.

Perhaps we’ve been spoiled with the likes of Two Point that took an older mechanic and brought its playability bang up to date, but RollerCoaster Tycoon 3 can feel sluggish and stilted when you just want to get things done. Laying down pathways one tile at a time feels like a hell of a chore when there’s so much else to be getting on with in the park. Why can’t we lay them out with a drag and drop? Why isn’t the Switch touch screen utilised for this kind of action? I hate this phrase but various little ‘quality-of-life’ improvements would have seen this port feel more at home in 2020, then just a rehash of a game with very little see it stand shoulder to shoulder with its more modern and accessible counterparts.

If you’re jumping in for the first time though and can forgive some dodgy control decisions you’d be hard pressed to not have a good time and get your teeth into plenty of content. You can effectively play the campaign for as long as you like, though the addition of two expansions are hard to resist. Soaked! and WIld! offer major park additions, the latter adding animals to proceedings essentially turning the game into a Zoo Tycoon mini-game, whilst the vastly more fun Soaked! allows you access to swimming pools, waterslides and various beach-style elements that bring your park to life in new ways. It’s a hell of a lot of fun designing a waterpark, and if Waterpark Tycoon isn’t a thing in the next few years I’m just going to have to make it myself.

So there’s plenty to love about this, erm, roller coaster of a nostalgia fest. It’s as engaging and fun as it ever has been, allowing your creativity to run wild and see it flourish before your very eyes, and whilst it adds very little in terms of a comfortable control scheme and upgraded visuals (1080p docked, 720 handheld, though it still looks exactly the same as it did before), there’s so much to be getting stuck into you’d barely notice. If you can look past the niggles, which I recommend you do, then you’ll have your dream theme park up and running in no time.

Ahead of the upcoming Planet Coaster, which is effectively RollerCoaster Tycoon with a lick of 4K paint and controls designed for the Gen-Z crowd, it’s a ballsy move to drop a retro coaster sim back into the collective conscience.

At the same time, it’s really good to have it back.

Whilst there’s barely been any kind of update to the visuals and the complication of moving PC controls to a controller is present and correct, RollerCoaster Tycoon 3: Complete Edition is a delight, purely because it’s always been a damn fun video game and in that regard, like everything else about this game, nothing has changed.

RollerCoaster Tycoon 3 Complete Edition is available now on Switch (reviewed on base Switch) and PC via the Epic Games Store.

The Villains are the focus of the latest LEGO Star Wars: The Skywalker Saga trailer
Turrican Flashback Review (PS4) - TurriCAN
The Finger Guns Podcast - Ep. 185 - Games of the Year 2022 / 2023 Hype!