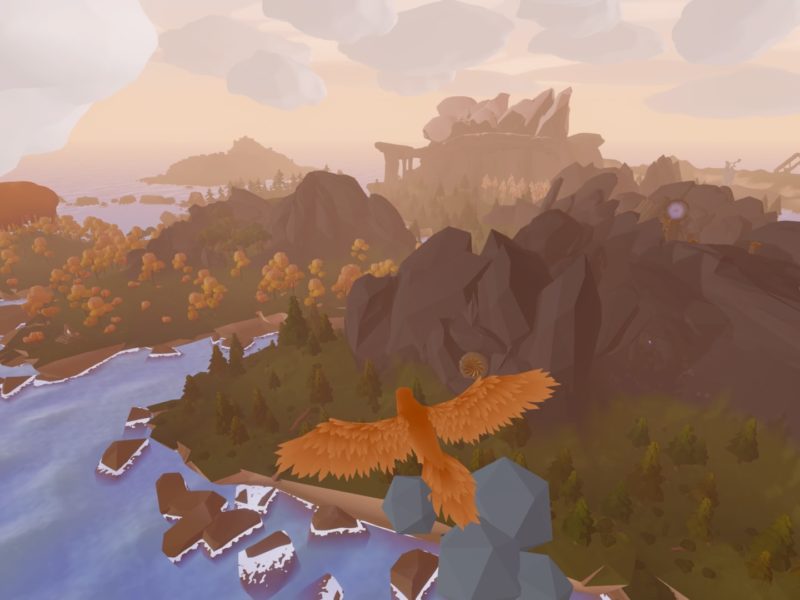 Feather is all about that age-old human wish (and Nelly Furtado’s) – to fly free like a bird, to escape the evil gravity that confines us to the ground, and to soar over the landscape – it’s been a basic human desire since we could use tools and language. In Feather you are a bird, free to fly around the game’s pretty islands, and to take your mind off the everyday. Feather glides alongside that little genre established by Journey and Flower, a short and sweet experience, but hopefully one remembered for the right reasons.

In many ways a review of this game will ruin it. It’s quite possible it will take you longer to read this review than the game will to finish and perhaps platinum. But of course it’s not really about finishing.

The game consists of two islands, and you are given full freedom to explore these from the wing right from the moment you press start. No loading, nothing to stop you, but also no objectives or direction. A brief tutorial gives you the basics of controlling your beautiful auburn eagle, how to turn, rise and fall, and how to move the camera. Controls are simple and there’s no reason anyone couldn’t deftly pilot their bird in any way they want. Invert the controls if you wish, but it’s all nice and intuitive. It’s then on to how the speed up and slow down with a simple press of L2 or R2 and your feathery avatar will obey, barrel-rolls to add a little pizazz to your flying experience, and a quick pivot, like you might do at the end of the swimming pool to change direction.

What’s really wonderful is the animation of the bird. The team have clearly taken pains to animate exceptionally life-like wing movements; flapping to speed up, slow down, and the general rhythmic pulse that keeps you aloft. Tiny white lines drift off your wingtips, and if you look back over your flight, you can see the patterns formed by your movements. Feathers are splayed for gliding, and when you take your bird high, and then hurtle towards the ground, they will tuck their wings in to make themselves more aerodynamic. It all adds up to a very natural-feeling flight system.

The two islands offer a nice amount of variety in landscape in a small space, from vibrant forests to a single snow-capped mountain, from shrines to strange rock formations. There seem to be the remnants of human inhabitants, leaving a few of their structures for you to fly through and between. Of course that’s really the point, giving you things to fly around and through to keep you interested. But the islands suffer from being just not that big and beyond a few shrines, not having much of interest to explore. It feels like the more gamified things that could have been included, like rings and gauntlets, courses and points, races or time attacks or even just a few basic objectives – all have been left out in favour of a natural experience. There are a few cave-like areas where you can test your flying skills, and there is a secret area to find (I won’t spoil the one and only secret) which will lead you to a portal and a whole second island to explore, although there were some strange loading issues between the two islands.

A nice but fleeting touch is that, like Journey and a few other games of this type, other players may appear in your game for a short time, giving you a few minutes to fly around each other and observe each other’s flying skills. Of the two times this happened for me, the first time the other player never noticed or cared that there was a bird chasing after them and tweeting about it at the top of their lungs. The other time we managed a little dance amongst the clouds, rising and diving in unison.

You can fly through the triangle shrines to change the type of bird you are using. You’ll start with an eagle and soon get to use a seagull, a raven, a nice blue bird and an apt kookaburra (the devs are from Australia). To my mind none of the birds handled any differently to each other, but its possible the seagull wasn’t quite as fast. You can fly through the hoop shrines to change the music, and Feather has a nice selection of a dozen or so tracks of peaceful, rhythmic piano and ambient music to fly to.

Feather is a short-lived experience. After an hour and you will have seen everything, and many will be able to complete it in twenty minutes. I’m sure there are guides already up for how to get the platinum trophy in about 20 minutes, but you will likely get 80% of the trophies without help, and with no effort beyond just doing a few bird-like things. Dive-bomb, fly through the clouds, fly fast, fly through the hoops – everything will get you a trophy. Once you are done with that though, there’s not a lot there to bring you back.

Unfortunately there are a number of glitches that can take a toll on your enjoyment whilst in flight, mainly on the control side, rather than anything graphical. At different points during my single hour of playing, I lost the ability to barrel roll, to pivot and turn around, and the ability to slow down. I wondered for a short time whether it was because of the different birds that I’d lost barrel roll for example, but when I also couldn’t slow down any longer, I knew it was the game. This made it impossible to land, another of the game’s simple trophies. On the second island I also quite often lost the ability to climb into the sky properly, finding the game turning me around for no apparent reason, making my bird more like a plane without enough fuel. It’s a shame that such a short game should still be marred by quite fundamental control issues at least on Playstation.

Feather is a beautiful experience for an hour – you will feel like a bird, you’ll want to fly away, and for a while you can just drift and explore. But once that’s done, Feather has very little replay value, a number of glitches that mar its controls, and little to keep you exploring. Perhaps it will draw people back for a few peaceful five-minute escapes every now and again. However considering its price and longevity, its more likely to sell to those who want a quick platinum, than those who would replay it.

Probably the quickest and most pleasant platinum trophy on the Playstation 4, Feather gives you the chance to soar like a bird. It’s a shame that it is held back by an empty world, a lack of interesting things to do beyond flight, and control glitches.

Feather is available now on PC via Steam, PS4 (review system), Xbox One and Nintendo Switch.