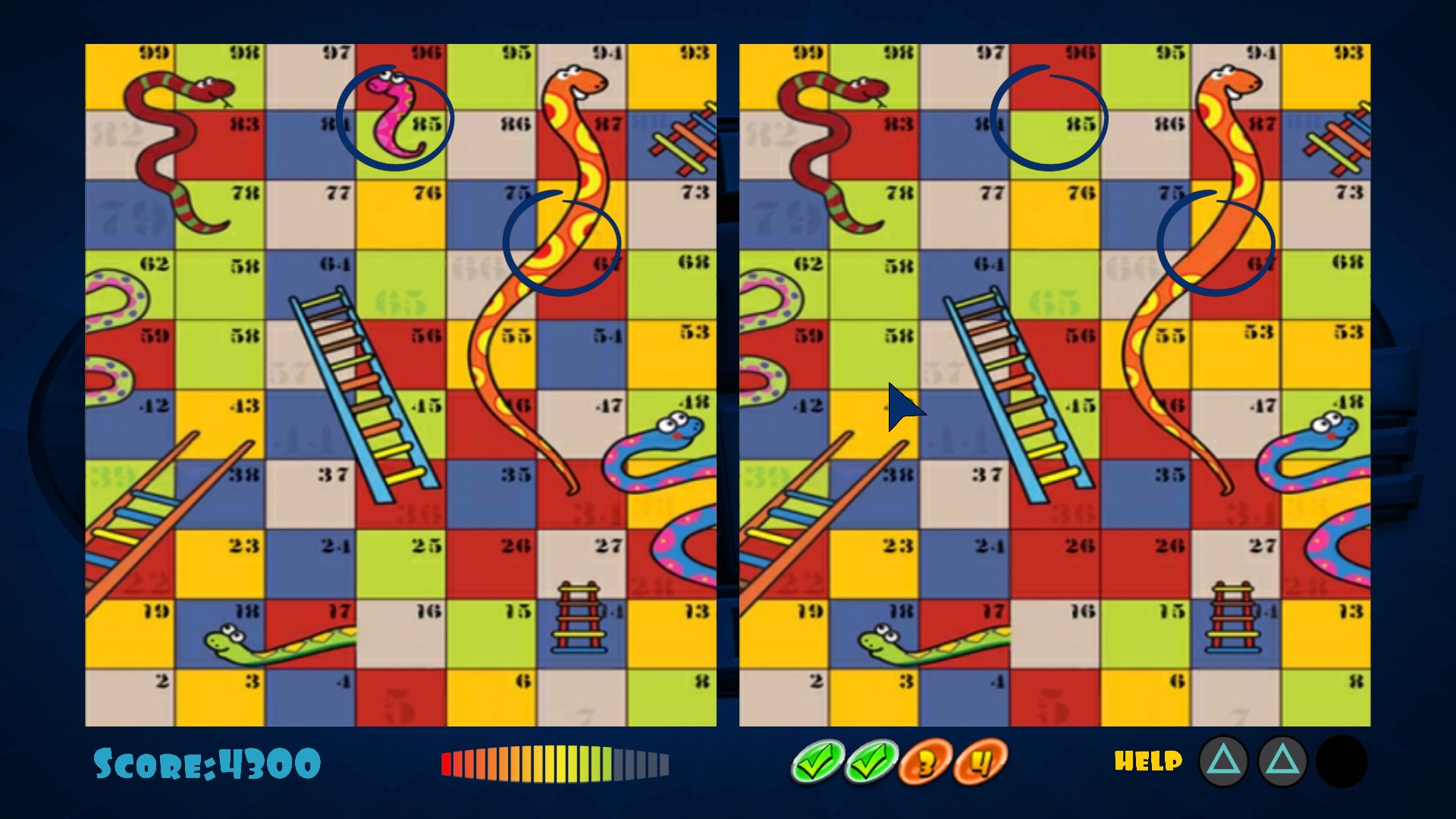 A classic comes to consoles as Spot The Difference from Sabec gives it a new 2 player angle. The Finger Guns Review.

There I was, scrolling through the PSN Store when I spotted something that piqued my interest and I immediately got excited. That thing was ‘Spot The Difference’ from Sabec Interactive. I can almost hear the confusion radiating off the screen as I write that so let me explain. A decade ago, I used to spend far too much time in pubs and in between the drinking and frivolity, my friends and I would play on a pub quiz machine. It was one of those pub quiz machines that cost £1 to play but offered you the chance to win £20 if you did well enough in any of its games. Our regular favourites were “Pints Make Prizes”, “Bullseye” and “Spot The Difference”. My friends and I got so good at the latter game that we’d regularly take that £20 jackpot out of the machine. Sabec’s version of Spot The Difference isn’t the same version, but it’s close enough. The logo is the same colour scheme and the mechanics are the same. It’s a shame that there’s not really a massive amount of content here.

If you’ve ever played any type of Spot The Difference, whether it be in a magazine or in a video game, the set up is the same here. 2 images are side by side and you’ve got to find the differences between them. In this game, there are 4 differences between the 2 images in each round and using the cursors moved with the Dualshock 4 thumbstick, you’ve got to hover over then click on them. You’ve got a limited amount of time to find all 4 differences but if you do so, you’re onto the next image with a fresh timer. Each difference you find adds to your score and once you’ve finally failed to find all the differences on an image, your cumulative score is added to the leaderboard. Unlike the pub quiz machine version, wrong guesses don’t reduce your time limit. It instead reduces your score. This is a formula that’s older than I am but it still works and it isn’t revolutionized here.

There’s some nice touches in Sabec’s Spot The Difference too that make it both accessible and good clean family fun. This is a port of the “Ultimate Edition” that was released on the Nintendo Switch back in 2018, itself a port of the original mobile game, but with one difference – it now allows 2 player. With a second controller, a second cursor is added to the screen and you can both spot those differences together. It’s co-op play with both players looking for the same 4 differences. It’s a shame that Sabec didn’t push further and include  competitive modes here but playing this with my wife and kids, while all of our broods scream “below the grapes!” was quite fun.

There’s a very gentle difficulty curve in Spot The Difference. A little too gentle. The first few are always really easy then things slowly get more difficult and more challenging images are used. Differences get smaller and more obscure. Images get far more busy or repetitive.

The biggest issue that Spot The Difference faces is that there’s really not enough content. Within an hour, you’ll have seen all of the images over and over and there’re only a few differences per image. My wife and I became experts at the game, quadrupling the existing game’s high score before we gave up through boredom, not because we’re eagle eye’d but because we’d played the game for long enough to see all of the images and all of the differences. It’s a massive shame that there’s not many images or content.

Unlike some of Sabec’s recent output, Spot The Difference has some ambiance to it. There’s music and cheesy yet appropriate sound effects for correct and failed clicks. The UI is immediately intuitive and it’s very easy to play.

There are a few things that needed tidying up though – the accuracy required for finding the differences can be wildly different. One difference needs a click in the general vicinity of what’s missing/difference, others need what feels like pin point accuracy. There’s also some laughable overlaying that stands out like a sore thumb. One image of jelly babies, has a fake jelly baby in the centre that looks like it was painted on with the spray can option in Microsoft Paint. Some of the differences in the images are almost hilariously obvious too – a diamond on a playing card that’s magnified just plain looks poor and stands out immediately.

I’ve played a lot of Sabec’s recent output on PlayStation 4 and Spot The Difference is probably the most proficient and fun to play game of them all. I stop short of calling it ‘good’ though because there are other games that have these exact same mechanics but with more content, better implemented systems and for less than half the price of this game on mobile. Some might argue that having a 2 player mode makes this version worth it but I’ll be honest, I’ve never played a Spot The Difference game alone – it has always been with friends and family – and it has always worked via touch screens. Still, if the only format you have available to you is a PS4 and you’re desperate to play a game of Spot The Difference, there’s a few hours of good clean fun to be had here.

A console version of a classic pub quiz machine game, Sabec’s Spot The Difference is fun to play as a group and intuitive enough for a toddler to pick up. Unfortunately, a lack of content means that within a few hours, the images have repeated so often that there’s no more differences to find. There’s much better versions of this concept elsewhere and for a much smaller entry price.

Spot The Difference is available now on the PS4.

Tamarin (PS4) Review – Rare-ly Worth It
Explore The Art of Stealth in Sniper Elite 5
Biomutant gets a May release date.