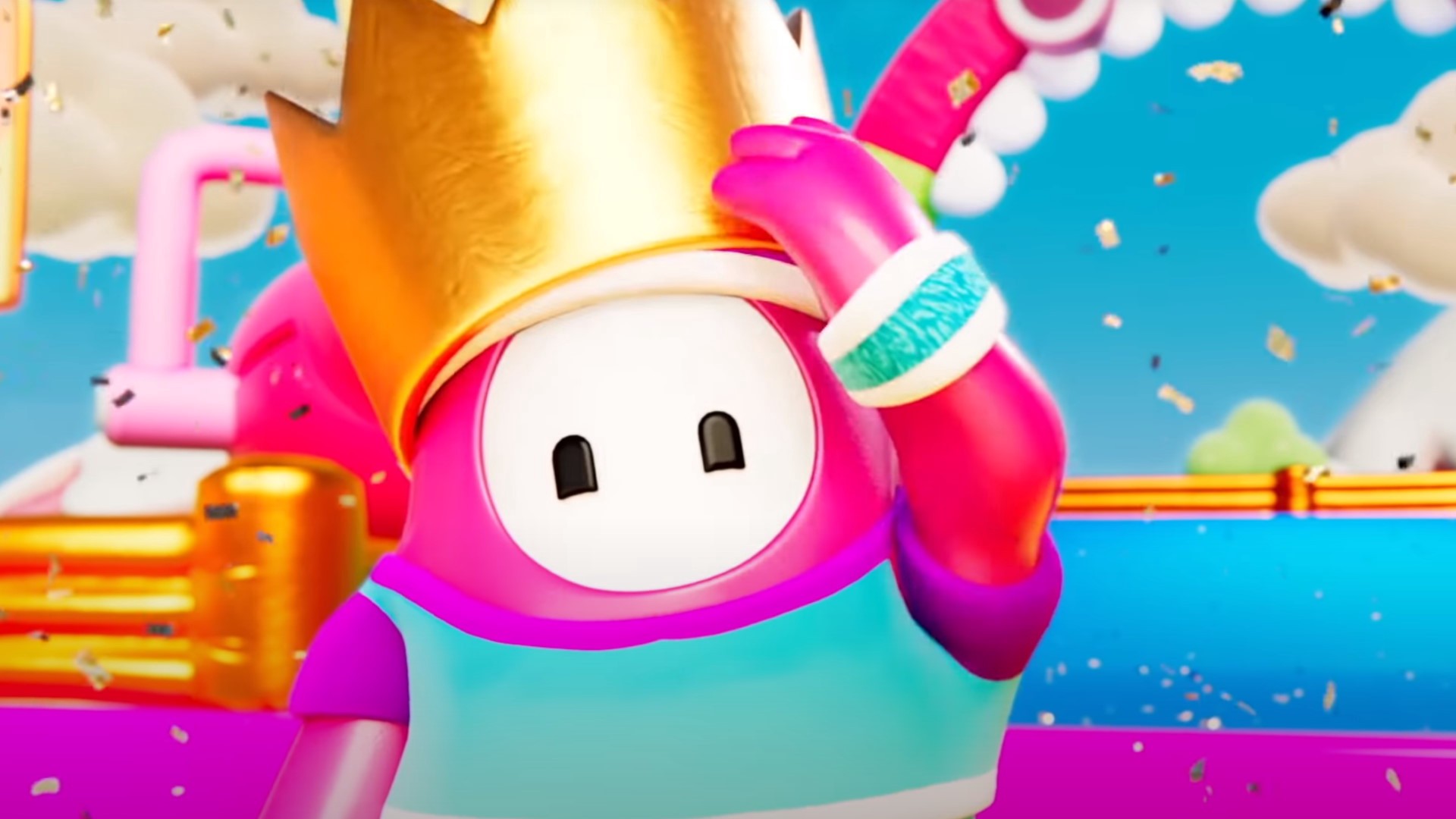 I’ve finally made it to the final round. As I stand with my five other competitors, it’s a straight race to the top to touch the crown and claim my first victory. How hard can it be? I’ve spent the last twenty minutes in this episode avoiding catapulting fruit, doors that won’t open and pink sludge rising all around me as I desperately attempt to keep my head above water. This final run looks good. I’m right at the front and I can easily avoid everything coming my way in the hopes it will knock those behind me into the abyss and the crown will be mine.

I make it to the crown. I jump. I fall. I forgot to hit the grab button. I can’t make it back in time before I’m eliminated. It’s all over. I have the biggest smile on my face. Welcome to Fall Guys.

There aren’t many games which I play nowadays that make me so happy just to be involved. I can lose over and over (and over and over) again and immediately I jump back in to more than likely suffer a similar fate and yet, I’m perfectly okay with that. Losing in Fall Guys is something you’re going to do often and at times it’s more than likely completely out of your control. I tend to tell myself that it just ‘wasn’t my game’ and I’m dining out on that statement each time I fall at the last hurdle. It’s no bother, I can just try again. And I do, over and over again until my controller dies.

When people ask me about Fall Guys – and they do, because I don’t shut up about it – I try to explain that it’s Takeshi’s Castle meets The Hunger Games. A Battle Royale where you don’t kill anyone – unless you’re feeling particularly evil and want to throw people off the side of sodding platforms. I do my best to explain that it’s not really anything related to the likes of Fortnite, which obviously encourages the decimation of your enemies with rockets and speedboats and cars and grenades. Fall Guys is mental warfare. It’s bright and breezy and family friendly in every sense, but it’s also utterly devastating in the pursuit of that godforsaken crown.

The only relation Fall Guys really has to the rest of the Royale genre is that the last jellybean-shaped dude standing takes the spoils. There’s currently a maximum of 60 participants – more than enough when you’re in a scrum climbing over each other to get through a single doorway. The most enjoyment I’ve garnered from my 200+ playthroughs is certainly in the races, where you simply have to make it to the other end of an impossibly over-dramatic obstacle course under the qualifying number. Four levels will follow that are a random mixture of races, team-based games such as a football inspired course, tag (here called ‘Jinxed’), chasing each other around a course whilst attempting to catch a tail someone else is wearing, a course with platforms moving left to right and back again which you’ll need to jump over so you don’t fall through and several more which all add to the madness. You don’t know what might come next so you have to be ready for anything.

Thankfully, the controls are simple enough that it’s straightforward enough to get your head around. You have jump, dive and grab buttons and before you know it you’re tearing through levels with reckless abandon in the mere hopes of survival. They’ll be streamers and guides available attempting to sell you tactical ways to beat certain courses and not a single piece of information will be useful to you. Sure, you can learn where hidden drops may occur (one race course is hiding a peach of a drop) and where not to go but your biggest battle will be against your own persistence. There are segments where you’ll just need to take a second and look forward. In the earlier stages, it’s ok to do this as you’ll have just that little extra slither of time to work out your way across See Saw platforms that don’t want you on them. Anyone can pick up Fall Guys and have a blast, and that’s the games fantastic USP. Fall Guys is for anyone and everyone.

And also, just look at it. It’s all so dumb that you can’t help but fall in love with its idiocy. It’s what makes me want to return, the sheer glee of it all pushes me through and makes me want to keep trying over again. Contrast this to something like The Last of Us Part II, which I’ve beaten and want to go back to at some point to clean up trophies, but I’m putting it off purely because I don’t want to be in that world right now. I want to be here, failing upwards, learning courses and figuring out how the hell my character can jump that far when his legs are so small. The lightness of Fall Guys is a tonic to Ellie’s world, and dare I say even Tsushima. Jumping from one to the other wasn’t particularly pleasant. I needed Fall Guys to lighten my damn gaming up a bit and it’s done so in spades.

And it’ll keep me coming back because I want to unlock everything. Fall Guys is currently in ‘Season 1’, and as I progress up the levels I’m unlocking different colours for my ‘fall guy’ along with costumes, currency – more on that shortly – and emotes. If you keep getting knocked in the first round you’re going to notice how little XP you earn. The wiser you get to Fall Guys the more generous it is with its rewards and you end up very much wanting to please your jellybean masters.

Saying that, as the game is currently a free download on PlayStation Plus at the time of writing, I knew I’d want to throw developers Mediatonic some dollar for their work so I picked up both the costume packs, one at £3.99 and the other at £7.99, which also featured a stack of in-game currency. I’m tempted to pick the game up on Steam also – seeing how Fall Guys runs miraculously well on my crappy-ass laptop that has a hissy-fit when I try to run Football Manager – though something tells me there will be plenty more costume packs to come down the pipe. I’m certainly expecting some licensed costumes from Disney, Marvel and the like once the word spreads of the games gangbusters numbers.

Yes, I will pay over the odds so my bean can dress up like Captain America. And so will you, don’t lie to me.

So let’s talk shop. Specifically the shop in Fall Guys, where you can spend your earned or purchased currency known as Kudos. In the shop you exchange your currency for cosmetic items that will change each day. Legendary tier costumes, colours and patters are also available, though you can only unlock them with Crowns you receive from winning, aside from those hidden in the aforementioned level-up battle pass-esque system.

The handouts of Kudos for playing is generous, I feel. The further you progress in your games, the more Kudos you earn which you can stack up until you earn enough to buy that cosmetic you want so badly. Of course, you can also just buy Kudos with your real money if the grind is just too much.

It’s not all plain sailing though just yet. Those day one servers were hammered, forcing Mediatonic to pull matchmaking for a couple of hours to calm everything the hell down. This is commonplace on launch days – particularly if your brand new highly anticipated Royale game is free to 40 million users – and I certainly had trouble finding matches on the first day, but it seems to have calmed down now thankfully. I’ve spent most of the day before the review playing consecutive games and having little issue barring some overtly long matchmaking times.

The PS4 version does appear to be a little glitched. When I won my first crown it took a little while for the server to catch up. I say a little while, it took around 45 minutes for the game to recognise I had actually won and allow me access to the rewards I earned. Not a biggie, but it would appear this is a common issue so hopefully it’s just the server getting maxed out and it can settle down over time.

I’ve had to do a few hard resets of the game after it’s been caught on the ‘Qualified’ screen. Again, I don’t know if this is a server issue or not but after four rounds of intense Fall Guys goodness only for the game to crap out was a little frustrating. These issues are hopefully teething problems which will be ironed out over time. When the game runs as it’s meant to, it’s about as joyful as gaming gets nowadays.

And there appears to be more to come with Fall Guys teasing new courses, new cosmetics and new features coming down the road for future updates. I certainly am not bored yet and I’m looking forward to finally getting on with the Finger Guns team soon but a nice mixture of extra courses will certainly be welcome. If Fall Guys is going to be supported for years to come, there’s no telling just how many tails I can catch in that time. The future is bright and ridiculously colourful and I can wait to see what Mediatonic have up their sleeve.

One could argue I’ve been somewhat overly sentimental about Fall Guys here but the plain and simple fact is the world need something like it right now. Fall Guys is harmless, uncontroversial, exactly what it says on the tin and a delightfully silly antidote to the world. There’s very little to compare it to because it’s very much its own beast and one can only hope it stays that way. We’ll be playing Fall Guys on next-generation consoles and probably beyond, with a Rocket League-esque launch that will catapult it into the stratosphere, much like Psyonix discovered way back in 2015. 500,000 viewers on Twitch on day one can’t be wrong, right?

Now if you’ll excuse me, I must get back to Fall Guys. Then I’ll probably watch someone play it for a couple hours after that. Am I turning into a ‘fall guy’?

I just got eliminated. No bother. We just keep going;

I’ve made it to the final round. As I stand with my five other competitors, it’s a straight race to the top to touch the crown and claim my first victory. How hard can it be? This final run looks good. I’m right at the front and I can easily avoid everything coming my way in the hopes it will knock those behind me into the abyss and the crown will be mine.

And so it came to pass. Fall Guys is my favourite game of the summer.

A breath of fresh, bright and breezy air after a summer of hard-hitting AAA’s, Fall Guys cements itself as an essential addition to your party library. Believe the hype.

Fall Guys is available now on PS4 (reviewed on PS4 Pro) and Steam.

Disclaimer: In order to complete this review, we downloaded the game as part of our PlayStation Plus subscriptions. For our full review policy, please go here.