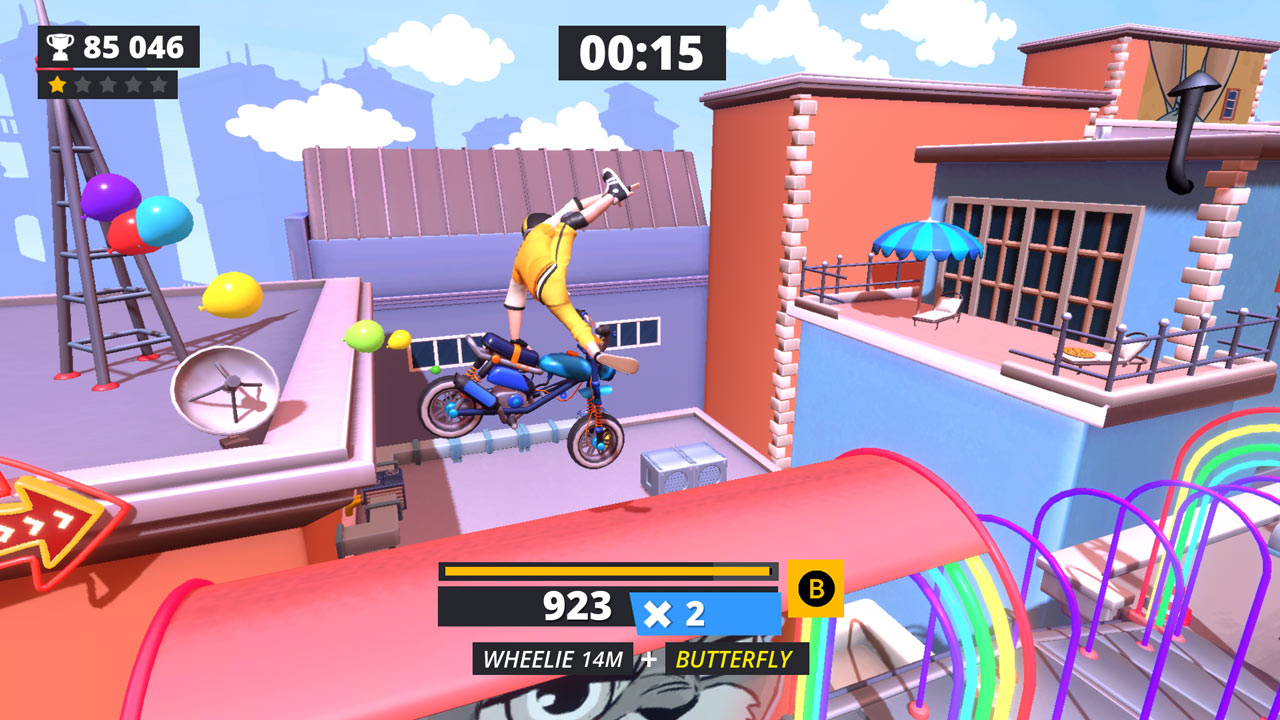 One part motorbike trials game, the other a... Tony Hawk halfpipe simulator? Urban Trial Tricky is a wacky mashup that'll test your patience more than your skill. But for how long...? The Finger Guns review:

It’s no surprise that I like a good trials motorbike/bicycle kind of game. I’ve mentioned before, even in my review for Trials Rising, that I put many an hour into getting good at the series.

So any kind of hybrid or spin-off of that, I’m bound to be on board with. Shred! 2 didn’t really scratch the itch that Rising left, so perhaps Urban Trial Tricky may be able to pick up where Ubisoft’s series dropped the ball.

A wacky, if somewhat simple, game that mixes trials bike riding and SSX-style tricks, Urban Trial Tricky is definitely something different. But does it score all the right moves or crash and burn? Let’s put on our safety gear and find out…

Starting strong, UTT looks bright, bombastic and colourful. As I’ve said, I’m reviewing all of my Switch games on the Lite, so on that small LCD screen it’s a very vibrant art style.

Weirdly, the comparison that springs to mind about the rider, bike physics and environments is that of any CGI kids film in the last decade. The rider, more specifically, looks like Vector from Despicable Me and it’s an image I just can’t shake. But that’s a good thing!

And on a console like the Switch, which in itself goes for the bright and colourful style of charm, it fits like a glove. Each level looks like a parody of modern environments, all exaggerated wooden beams and ramps. Everything is colourful and creative, from the special tricks you pull off, to the effects you can add to your bikes, all to create a wonderful sense of chaos.

But we’re not here to admire the scenery, are we? We’re here to pull sick tricks and mad combos to smash goals and look stylish doing it. The meat of this pie is in its riding and trick system, so how does that taste?

Well, it tastes pretty damn good. Riding is pretty simple, with the left thumbstick controlling weight distribution with ease. There’s no crazy input to pull wheelies or stoppies off, it just flows as part of normal riding. You could even pull tricks whilst doing a wheelie or stoppie to defy physics and add variety to your combo, if you’re feeling fancy.

When you’re up in the air, that’s where UTT shines. In the score based levels, the joy is in pulling off insanely lengthy combos like in the old Tony Hawk games. Tricks are assigned to the face buttons primarily, and you unlock more as you earn more stars, that let you pull off exaggerated versions of motocross stunts. As time and stars go, you start to unlock tricks that require multiple button prompts, which yield to more spectacle and points.

Thankfully, it’s not an insanely complicated system to get used to. There’s no tweaking of moves with the right analogue stick, no balance meters when you land on the ground. Obviously you’ll see if you’re about to topple over or not, but that relies on you to keep it going.

And there is some sheer fun to be had in trying to string a massive combo together, the frustration when it inevitably goes wrong. It’s just that the fun suffers into repetitive territory when you’re just doing a back and forth on the same level…

Back, Back And Forth, Forth…

The three types of event in Urban Trial Tricky are pretty par for the course(s).

You’ve got your timed runs, which are more reminiscent of Trials, Shred! and all those others. Your goal is to reach the end of the level in the quickest time, naturally. There are optional challenges that pop up, too, like beat the developer’s time or pull a certain amount or designated on-screen trick. These aren’t necessary for five-star runs, but can unlock more cosmetic upgrades for you and your bike(s).

Now, it’s the trick levels that I find a bit of a weird one. Instead of having a set route, like a timed run, to pull off tricks and high scores, Urban takes a different path. And by different, I mean the same path back and forth, like the loosest definition of a halfpipe… with ramps littered throughout it.

Which, for the first few trick courses, is fun. But after you realise that half of the events take place on courses like this, the novelty of just traipsing up and back to hit a prerequisite score gets a bit boring after a while. There is fun in keeping a massive combo going, though. As you reach the end of the track, pulling a 180° spin and getting that score multiplier going is a joyous experience.

It’s just that if/when you lose that streak, the magic wears off as you have to build momentum and enthusiasm up to a few more laps of the same ramps and obstacles to get back to where you were. Is does help somewhat that there are money bags and snacks to collect for extra earnings and cosmetics, but how far can you carry the same concept over so many levels?

Lastly, there are the competitions. These are more rhythm based affairs that see you pulling off the required trick to score. The more of these you pull off, the higher your overall score will be at the end. So whilst it’s not about a high score, it’s still about pulling off as many tricks as you can in a time limit.

That’s pretty much the core component to Urban Trials Tricky. Those three modes make up the career, and there are plenty of tracks to make your way through. There is, however, a massive gap in the menu between Single Player and How To Play, which makes me wonder if some kind of multiplayer mode is coming…

Pimp My Ride, Or Something…

Now, as you may have gathered, Urban Trial Tricky isn’t the deepest of games. Granted, it’s a fairly simple concept to start with, with UTT not pushing the boat out much further than that.

However, like a vapid supermodel, it may not have depth but it does have its looks. Part of its charm is the wealth of customisation you can give to both rider and bike. I don’t mean mechanically, that’s all fairly basic.

But you can jazz the lad up in a variety of outfits and costumes, from plain new clothes to hot dog and zombie attire, even plastered up limbs! Then there’s your noble steeds, with all four of them getting a variety of paint jobs to show off.

Yet it’s doesn’t end there, as you can even get exhaust effects too. Don’t want smoke? Have some confetti instead. Or, complete with clown outfit, why not balloons! Sure, it adds nothing advantageous to proceedings, it’s just a bit of fun. But in this world, sometimes that’s what we need.

To conlcude, then, Urban Trial Tricky is a Trials-lite game that can be fun, if you want it to be. Yes, the repetition kicks in when you see the same backgrounds of the same courses as you do the same loop to score points.

Yet as this isn’t the main objective, and there are timed and competitive levels, it doesn’t always fall too far into stale territory. It’s not realistic in any sense of the word, but there is a neat little racing system for maximum times in there if you learn to spot it.

At the end of the day, it’s fun to pull yoga poses whilst wheelie-ing or show off your Superman triple-backflip skills for that highest of high scores. If you are playing on a normal Switch, then there’s fun to be had in passing the pad round for people to beat your scores. Conversely, if you’re on a Lite, it’s a fun way of passing time by cracking out a few tracks and earning some more stars.

Whilst not the deepest or most realistic of Trials-like games, it makes up for it with silliness and charm.

Urban Trial Tricky is available now on Nintendo Switch (reviewed on Switch Lite), and is listed as Coming Soon on the Steam catalogue.