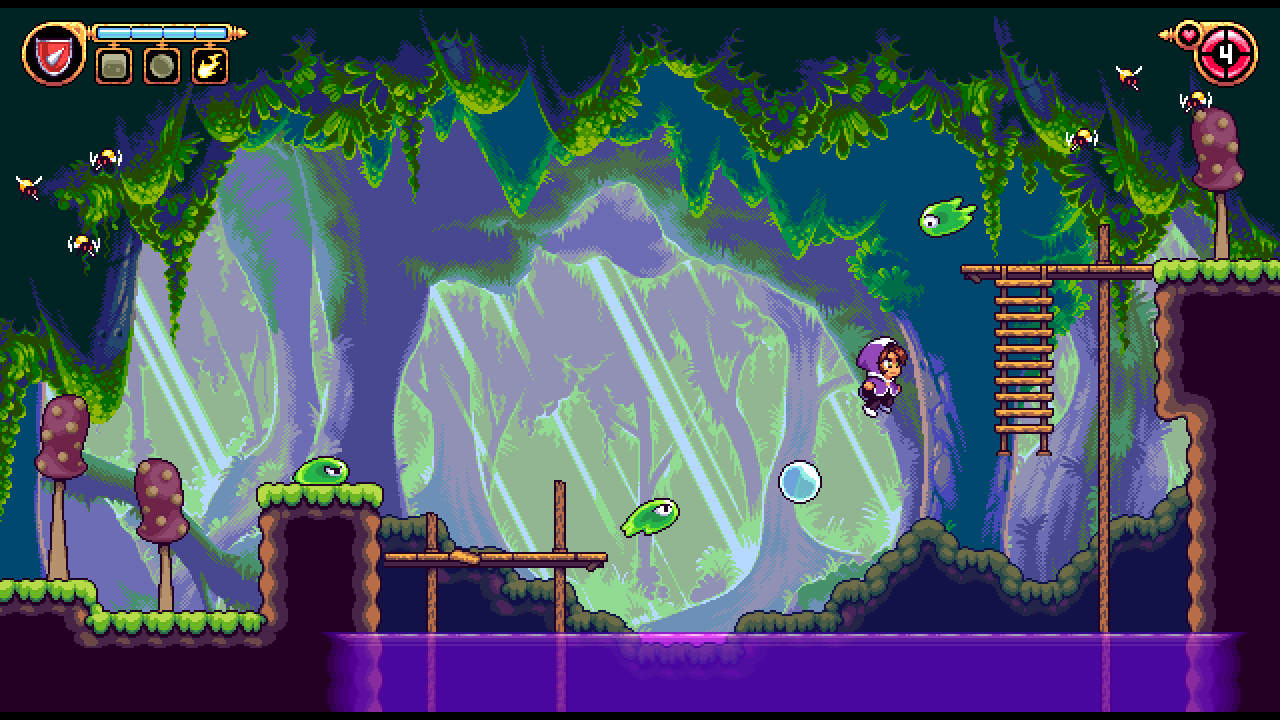 Sequel to the well-received 8bit metroidvania Alwa’s Awakening, everything has been enhanced for Alwa’s Legacy. But is it all just flash-in-the-pan, or something that will live on? The Finger Guns Review.

Talk about timing. Slap bang in the middle of the biggest indie game announcement week there’s possibly ever been with Steam Game Festival, Guerilla Collective and Summer of Gaming, Alwa’s Legacy says, you know what, those games look great. But looking is not the same as playing. What if I told you, you could play this pixelart metroidvania right now? As release dates go, it’s nigh on perfect.

In a sort of spiritual recreation of the real leap from 8bit to 16bit, Alwa’s Legacy updates the graphics from its first outing, 2017’s Alwa’s Awakening. It’s out with the old style and in with the new, and it’s a tangible difference. This has the look of Super Mario World over just plain Mario and though I really like 8bit graphics of the original, this step up is gorgeous. I wonder if a third game in the series would jump to 32bit, and 3D?

Developed by Elden Pixels (What a Dev name! I love it), Alwa’s Legacy is a Metroidvania in the classic sense; only a few directions on where to go, simple controls and a simple premise. But does it do enough that it can stand proud alongside the classics of the genre?

If you haven’t played the first Alwa, no bother. Beyond a few comments at the very beginning, it’s a whole new story and there is zero need for prior knowledge of what happened. You play as little Zoe, or as I like to think of her, Purple Riding Hood in her little hooded cape, who is meant to be something of an adventurer, but has the proportions of a little girl. Her hair changes colour from pixelart cutscene to actual gameplay, but she’s a fantastic, slightly sarcastic and plucky young lead who it was a joy to play as.

Zoe has woken with amnesia (yawn) on the edge of the land of Alwa, which although a little boring as it’s the oldest narrative device in the book, is convenient because it means that everything is as new to her as it is to you. There’s a blue-robed flying mage out for revenge, we presume because you thwarted him in the previous game, but you don’t need to fight him until the end. Head into town and an old lady called Saga will give you a quest; you must find three gemstones and save the land of Alwa.

It’s really simple stuff, so don’t come expecting a deep narrative experience with loads of twists. Come expecting what Metroidvania’s do best. Exploration. Even later on the directions are barely much more than find your way to these three bosses, or ‘My farm is dry I suspect the problem lies in the Sylvan Temple’. Instead it relies on the compulsive act of wanting to explore and discover its mysteries, but they are generally mysteries of location and secret areas, rather than those of compelling plot.

Everything in Alwa’s Legacy is on the simpler, more accessible side of games. There are no themes darker than your average Disney film, and it would be appropriate for all ages, both in tone and content, but also in the gameplay. It does not require that much from me in terms of prior games skill and would suit beginners.

The world of Alwa is one great big map like any good Metroidvania game, full of labyrinthian, interconnected locales, each with their own distinct flavour, colour schemes and music. From dark catacombs where you can’t see the platforms ahead of you, to temples slowly filling with water; from cliffside peaks and climbs to blossoming farms and towns, the world of Alwa is vibrant and lovingly created in a simple but pleasing pixel style that recalls the classics. It’s cute but well put together graphics feel solid and genuine and give it a feel of a lost SNES game.

As in any good Metroidvania, you explore everywhere you can until you come to somewhere you cannot access. You collect abilities and power-ups as you go, and each of these starts to allow you to access areas you had to pass up on your first look. Alwa’s Legacy does feel very by the book in this regard, and players who have lots of these types of games under their belts may find it quite derivative and by-the-numbers.

You create blocks with your magic that help you reach new areas, bubbles that float you higher, or magic shots that can press far off switches. Most of the puzzles you’ll encounter are switch-based and while they are all perfectly well designed, there was nothing I could say was original. I did especially like the sliding block puzzles that you find scattered in some temples. You know the type where the block slides but doesn’t stop, so you have to use the edges of the room to get it in the right position. And you feel warm and fuzzy and clever each time you finish one, because if those facebook adverts are to be believed, 85% of people can’t finish these puzzles.

Another place where Alwa’s Legacy copies, but does things well, is its map. I have played dozens of Metroidvanias, and I found this map to be simple yet somehow compelling in the way it showed you what you could access and what you couldn’t. After playing some recently that had maps that were incredible obtuse, unhelpful and downright impossible to read, Alwa has a properly helpful map. It’s grid-based with gaps for where you haven’t explored yet, and clear edges for where you have. It has a proper legend, tells you where you’ve already found items. In short, a really great map, which is a very important thing in this type of game.

As you explore and backtrack to your heart’s content, Zoe will need to fight the small and often very unassuming enemies that she finds. That doesn’t mean they can’t kill you, they really can, and the game can be tough in places. However, most enemies just require two or three hits. There’s no combos, nothing flashy, it’s simple. But it works and it works solidly.

My only real niggle with combat was that getting hit makes you invulnerable for a second or so, but it also makes you unable to hit back. If you imagine that in-game, it means you get hit, can’t counter until you stop flashing, and then have to try to hit the enemy again, but in practice when you get hit you’re often still trying to attack, and that causes you to come-a-cropper when it invariably wears off in between your hits, and they hit you. Again. This was by far the most common way I got hit and it was infuriating. With practice, you learn to back off and try again rather than spamming the hit button, but it wasn’t my natural playstyle.

Bosses were generally pattern-based and simple, but they are nicely animated and inventive. One of my favourite sections was the water temple, and the boss at the end of that was a nimble water dragon. However Zoe’s sword was up to the challenge of bopping him on the nose to start a fire ball pattern, avoid, hit, rinse, repeat.

The only real difficulty outside of bosses lies in the three-hits-only health bar and the sometimes long distances between one checkpoint and another. These days many games would implement a retry feature in each room, but Alwa’s Legacy is all about emulating the classics, which means even having checkpoints is a luxury and getting from one to another is half the challenge of the game. There were sections I had to redo half a dozen times.

Alwa’s Legacy has a really fun and catchy retro soundtrack that holds up against the greats of the genre possibly even better than its gameplay. There’s an 80s rhythm behind a few tracks especially the Central Alwa theme, which was quite a tune. Had me humming along during the game and afterwards. Rushjet1 is a chiptune composer who has done music for PewDiePie and few other indies before this.

Sound effects are also really noticeable in Alwa’s Legacy, but for a good reason. They sound like they’re ripped right out of the SNES sound library. Satisfying boing sounds for jumping just like Mario, and energetic hi-yahs during combat really and to the 16bit feel.

Alwa’s Legacy lives up to the heritage of the classics its emulating. It’s simple in many respects, from a story that can be summed up in one paragraph, to its basic mechanics, and 16bit graphics. But it’s also something of a lesson in, not just how to do simple, but how to refine these genre staples to their essence. It feels timeless because of it. It doesn’t make many wrong steps, but it suffers from not pushing the envelope at all beyond honing an established style, and for ending up far too simple for those who want more innovative experiences.

If you need a Metroidvania in your life, it’s a good one. It’s simple to grasp and is very appropriate and playable for kids. It’s got a lot of charm. It’s just not very memorable for those of us who have played the greats of the genre.

If you enjoyed this article or any more of our content, please consider supporting our Patreon.