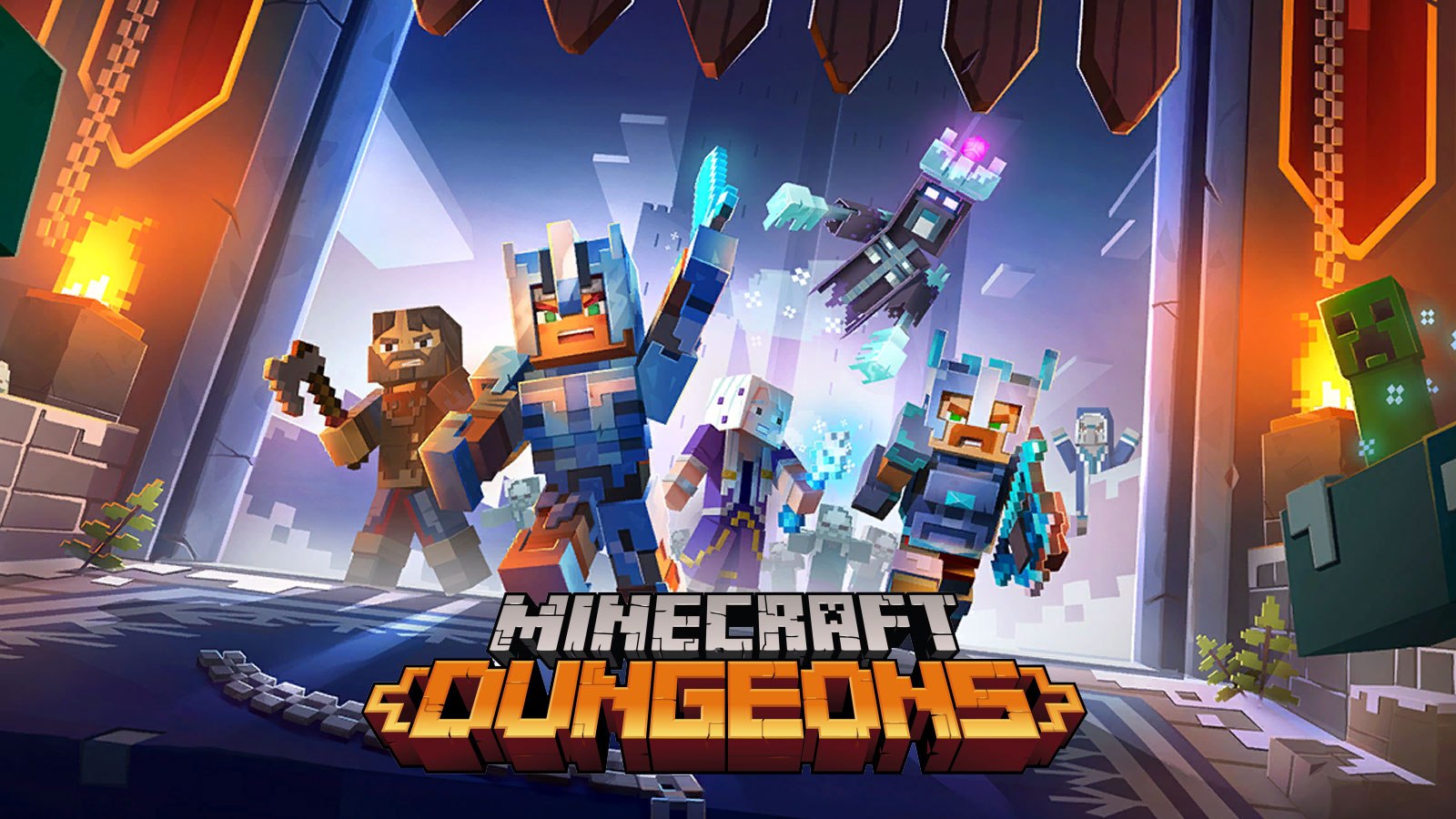 Minecraft Dungeons is a good time with friends and on your own, but the Minecraft license is wasted. The Finger Guns Review;

I really like Minecraft. I’m not very good at it: whenever I jump in to give it a go and see what I can create I either get far too impatient with it or I stick with it and create something I think is incredible, only to show my nephews and see them chuckle to themselves. They’ve done their best to teach me how to play correctly, but I just want to make stuff. That’s the beauty of Minecraft after all and why it’s one of the most successful video games of all time. The creative aspects ensure success. Look at Fortnite. Look at Animal Crossing. It’s not a surprise with video games that allow young, bright minds to make whatever the hell they want. The TellTale Story Mode spin-off even embraced this to an extent, with creative building aspects peppered in throughout its delightful narrative.

Minecraft Dungeons? Not at all. Not even a little bit. So why, pray tell, is this a Minecraft game?

A dungeon crawler certainly makes sense for Minecraft. You can look at Minecraft Dungeons as a kind of ‘My First Dungeon Crawler’. It’s not a genre I’m particularly versed in so something like Minecraft Dungeons was a nice first step into the genre, especially for younger players that may have watched others play Diablo and wanted a version of their own to explore. The blocky visuals are present and correct, with some rather lovely levels created with that signature Minecraft style, stuffed with hidden treasure chests and enemies that will be familiar to anyone who has ever played a Minecraft game.

A story does its best to connect the levels together but it’s about as important to the overall experience of Minecraft Dungeons as the building mechanics appear to be. There’s a cutscene at the beginning of the game where we meet the evil Arch Illager, who gains his powers after discovering a treasure and it’s up to you to end his reign of evil across the Minecraft world. That’s about it, really. There’s not an awful lot more you need to know. Good vs Evil, take him down. It doesn’t need to be any more complicated than that, really. You’re going to want to get on with your dungeon crawling and take on your favourite enemies as they gang up on you doing the bidding of the Arch Illager.

Throughout each level you’re outnumbered. The game can be played on your own either offline or online but ideally you’re going to want to play this with your friends. You’ll work together to take on multiple waves on enemies that become more and more as the game continues. It can be slightly overwhelming at times on your own, that’s for sure and though you effectively have infinite health – your health potion needs regenerating but doesn’t take a particularly long time – enemies can persistently pounce on you if you’re not equipped to take them on.

In co-op mode the game is made easier with up to three friends helping you out to power through the dungeons, and with a nice arsenal of weapons such as arrows, TNT, swords, daggers and even a fishing rod, lightning bolts, freeze rays and much more. You’re definitely always equipped with the gear (which can also be upgraded with Enchantment that unlock when you reach a new level and while the game is not essentially all that difficult, it’s a far easier task with some buddies.

The combat is great, though. Throughout it’s highly intuitive and simple to understand. There’s one button for attacking, one for ranged weaponry, one for health, one for special attacks. As mentioned above pretty much everything can be upgraded, including your armour sets. There’s a terrific range of weapons available and setting up your loadout at camp is a fun way to kick off each level.

The entirety of Dungeons is a Minecraft joy for fans, with the endless stream of classic mobs such as Creepers, Zombies, Spiders, hostile mobs such as the Skeleton with the power and the knowledge to shoot bow and arrows and rare cameos of the Endermen. There’s also the more passive mobs such as cows and sheep that you can take down to gain food to up your health. Then there’s the pigs who can run for their life with a chest on their back, so it’s fun to chase them down knowing you’ll be heartily rewarded. There’s a genuine sense of fun throughout and it’s delightful to explore these worlds, going off the beaten path to find hidden chests and coins to spend on upgrades back at your camp. The sheer Minecraft-ness of it all is present and correct, looking and playing the part with aplomb.

That’s why it’s so strange that the building/creative aspects of Minecraft just aren’t featured. At all? Through certain areas it would seem an obvious choice to be able to bring out a pickaxe and collect some resources to build forts or protective gear? It’s such a strange omission, particularly in a game that leans into most all the other aspects of Minecraft, for its primary mechanic to not be present seems decidedly odd. There were moments I could have done with building a bridge or a new armour set. To be able to do this on the fly would have made Dungeons an essential purchase. What a strange oversight.

Still, from a technical standpoint there’s very little about Minecraft Dungeons to complain about. The game runs beautifully smoothly, and while you could argue that Minecraft has never really been a visual powerhouse there are plenty of moments where the screen is packed with enemies and it’s still pretty impressive how stable the framerate remains, at least on my PS4 Pro version I’ve been playing. The music is also terrific. From the relative calm of the campsite to the dark undertones of the boss score, the additional Minecraft sound effects calling back to the original games, it’s a real treat.

There’s plenty to like about Minecraft Dungeons, and at £15.99 on PSN it’s terrific value for a game that you and your kids could beat in a weekend. It’s not especially difficult with four players and the light-hearted nature of it all ensures Minecraft fans will find plenty to love. It’s just a shame there’s no sign of the Minecraft’s primary mechanic, which would have been a great addition to the overall experience. It’s a good laugh and as is so often with co-op games, you’ll get the most out of it with your pals/family.

Minecraft Dungeons is out now on PS4, Switch, Xbox One and PC.