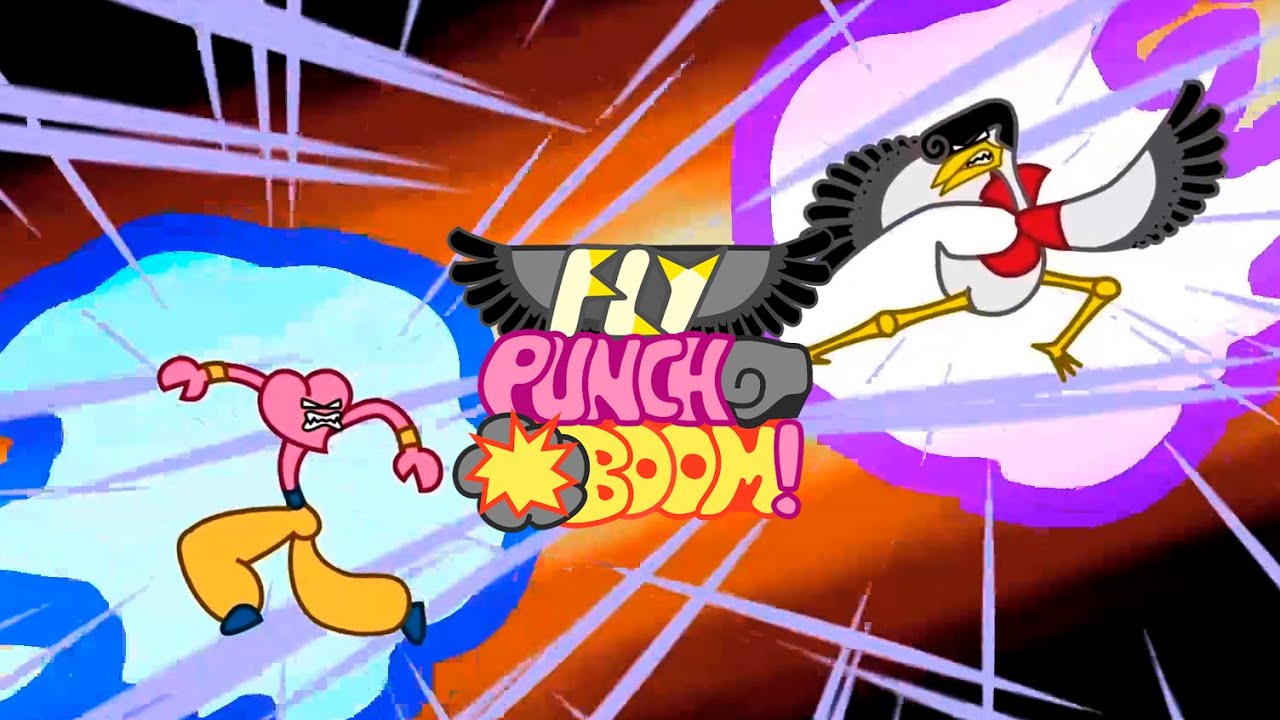 I get the feeling that Fly Punch Boom developers Jollypunch are a fan of Mortal Kombat, Dragon Ball Z and the Cartoon Network in equal measure. If all 3 of those IP’s stepped into a Fly transporter at the same time, the strangely appealing Cronenberg monster that would step out of the second pod would be Fly Punch Boom. This game has the most apt of names too. You fly. You punch. Things go boom. The only way it could be more accurate is if it was called Fly Punch Boom Laugh Throw Cry Counter Splat Wait What’s Happening Fall On the Floor With Stitch. That’s not quite as catchy though is it?

In Fly Punch Boom you play as a god-like cast of characters called Punchies. The only thing these characters share is the ability to chin each other. There’s a pig in a wrestling costume, a skeleton with chicken drumsticks for limbs, a being with a heart for a head and thick shins called Shin, a character called Twain which is some weird combination of a fur ball and a half-moon creature and more (2 of which you need to unlock). Aesthetically each character is unique but they also have their own special abilities which can be triggered during fights. Skelly fires out bones in 4 direction when she boosts. Shin does an almighty kick which can be devastating. Some characters get quicker or do more damage when they get enranged. Jollypunch have obviously had a tonne of fun making these characters and writing the lore behind them. I wouldn’t be surprised if someone told me that LSD and a Stephen Universe marathon had been consumed during their design either. These characters fight as some kind of mating ritual. According to the lore page in the game, Punchies will reproduce if they reach the height of battle with another of their kind. That LSD must have been really strong.

So, they do battle. And boy howdy do they do battle. The game is played on a 2D plane in 1 vs 1 or 2 vs 2 fights. Each character is encompassed in a fire ball which they can manoeuvre around an enclosed arena, like Super Saiyan’s dancing through the air. As you get close to your opponent, you can trigger 2 different attacks – a tackle or an rock-paper-scissors styled Clash. Catch your prey with a tackle and you’ll get to spam the Y button, repeatedly hitting your enemy(sic mate?) doing damage to their health bar then you stun and punt them away.

The Clash triggers a mini-game of sorts. A bar with a yellow tip appears next to each character as they go head to head. The bar will fill then empty and the idea is to press either X, Y or A when it’s as close to the top as possible. The button you press is just as important as the timing too. Each button press is weak and strong against 1 of the other. If you press X and your opponent presses A, A will win, no matter how full your bar is when you press it. If they press Y and you press X, X will win. A is beaten by Y. It’s a rock paper scissors type game that encourages you to mix it up but with a constant risk that you’ll lose out. If both players press the same button then the bar that’s the fullest will deal the damage. If both bars are similar, it triggers yet another mini-game – a fastest finger mash of Y with the winner dealing the damage. Whomever comes out on top of these encounters does a chunk of damage and blows the loser backwards.

The winner of a battle in Fly Punch Boom is the first to kill their opponent twice. If you shift your foe off their mortal coil by sapping away their entire health bar, you’ll smash them and take a win. That’s not the most fun way to score a kill in Fly Punch Boom though. Each arena is littered with dangers which can kill you instantly if you’re powered into them. The same can be said about if you push an opponent out of the penned off fighting area. When either of these events occur, a red bar appears on screen with a yellow band on it. The bar will fill and if you fail to press a button when the gauge is in the yellow sections, it’s curtains for you. When you fail, you’re treated to a manic non-gory Fatality style death sequence which is never not hilarious. On the space level, you can be forced out of the area before you sling shot around the planet, the gravity speeding you up below and return just in time to get your head punched off, revealing your candy insides. In the under water level, you can be eaten by a sequence of ever bigger fish. In a mystic desert level, you can get squished between 2 pyramids. Decapitated by a train. Eaten by a Kraken. Blasted by the laser eye of a giant alien baby. Impaled by the spikes of a cactus hotel. Eaten by a swarm of space piranha’s. There’s so many insane ways to die in this game. It’s ludicrous and hilarious and makes failing a death saving button press that little less disappointing. Some of these deaths need some pre-work too. Uncovering all of the spots where a comical murder can take place will take time and some exploration.

You can feel the game testing that has gone in to making Fly Punch Boom as you’re playing it too. The mechanics feel like they’re probably undergone many iterations to get to this point where they’re balanced, fair and enjoyable. Playing against people locally who’ve got experience with gaming is a blast. It’s a game that’s instantly accessible for people who play fighting or action games. This isn’t a party game that’s designed for a party with non-gamers though. Despite the bright and colourful aesthetic, matches can be as hard fought as a Street Fighter match. The fast button presses and stick movement isn’t something you pick up quickly if you’ve not played many games before. My wife can attest to that.

Because you’re flying around like Goku and you’re only restrained by the line barrier to the arena, you can sometimes end up quite a way away from your opponent. The camera does a decent enough job of keeping both players in the action which is helped by the trail of the fireball that contains your character. That being said, when I first played Fly Punch Boom on my Switch Lite and added a few other players with spare Joy-Con’s, the screen felt crowded and the action too small to understand well when we moved away from one another. When I downloaded the game onto the standard Switch and played it on a TV, this wasn’t an issue.

As for content, as well as having local and online multiplayer (which I was unable to test during the review period as there was no one online), there’s a single player arcade mode. Presented like a Mortal Kombat tower, you’re tested to fight your way through the roster of Punchies which get progressively more difficulty until you face the final boss. There’s 3 difficulty options, the easiest being a real doddle and the hardest being really quite difficult. The AI in the game is quite competitive and will give you a run for your money but it doesn’t replicate the fun of playing this game against other humans. It’ll rarely fail lifesaving button presses until you’ve been battling for long enough and the AI always seems to know where pick-ups are on the level and will hone in on them even if they’ve not entered the camera view as the player. Much like the aforementioned Mortal Kombat, completing the arcade mode with each character unlocks a reward – a text lore entry that further explains the origins of the character. It’s a far stretch from the cut scenes and ending videos you might see elsewhere but it’s a nice little touch nonetheless.

I need to mention how good Fly Punch Boom sounds. The game has its own theme tune which plays during some battles which would be right at home during the title sequence of a Power Rangers episode. Shredding guitar that make you want to raise a fist to the sky and bob your head along to it are present and correct. The sound effects used in the game are really punchy and clear too.

Fly Punch Boom is a refined, fun multiplayer experience with a simply competent single player mode as a sweetener. The high flying action can be a little hard to make out when played on the Switch in handheld mode and is best played on a TV. The art style is as if the Cartoon Network artists sketched out a fever dream, the soundtrack is suitably pumped up and it’s topped off by game play that feels like it has been honed into its funniest form. There’s a lot of laughs to be had here with gaming friends at a party or online – especially around the hilarious ways you can quash, wreck and otherwise dispose of one another – but it does require some fast button presses so don’t come into this expecting it to replacing Super Mario Party at family gatherings any time soon.

Fly Punch Boom! is launch on the Nintendo Switch (review platform) and PC on the 28th of May, 2020.