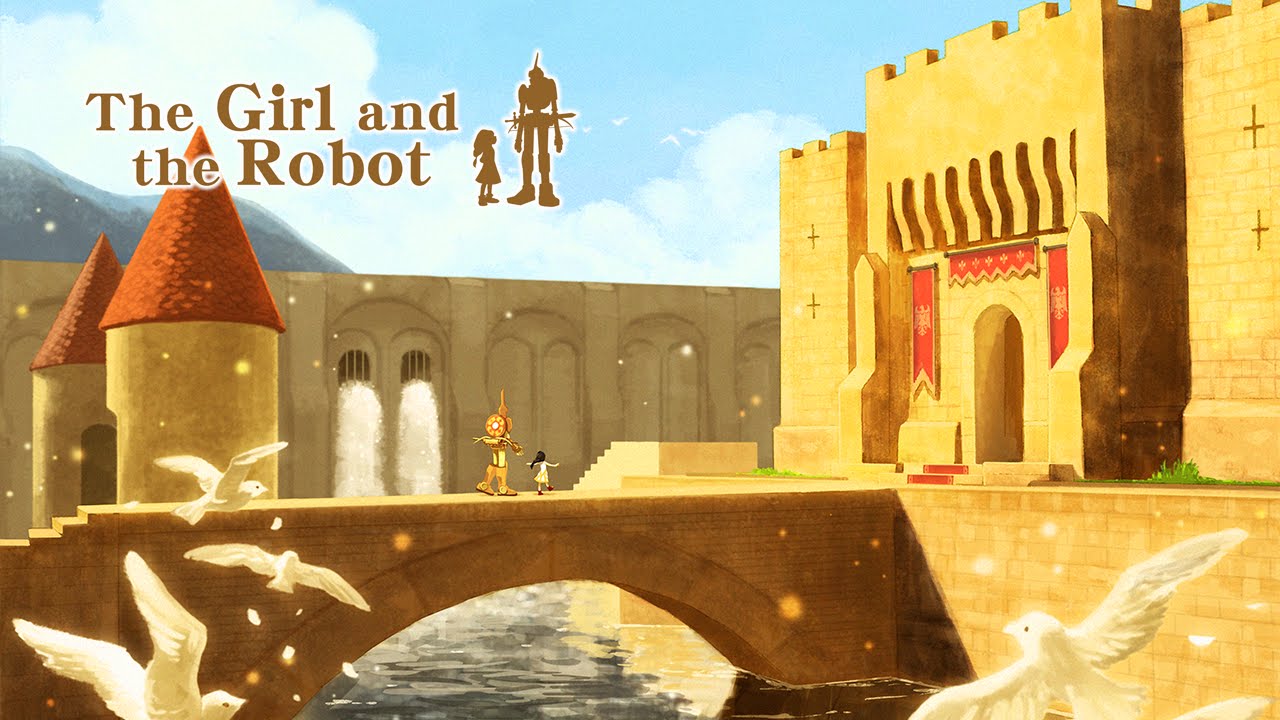 The Girl and The Robot have made their way to the PS4 and it’s a promising start for a fledgling developer. The FingerGuns review.

The Girl and The Robot is the result of a successful Kickstarter campaign and the debut game from multinational outfit Flying Carpet Games. Having debuted on PC, Mac and Linux, the game then made its way to the Wii U and a year later, has fought its way onto the PS4. It’s a story book styled fantasy action adventure about (you guessed it) a Girl and a Robot. The nameless girl, who was locked away in a prison for reasons unknown, is freed by a mysterious old man after she shows kindness to an injured bird. Soon after escaping her cell, she discovers an amulet that links her to a Robot that appears to share her fate. Together, the youngster and the automaton attempt to escape the clutches of an evil magical Queen.

The plot itself is… well… almost non existent. At least, not in a traditional sense. There’s not a single word spoken throughout the game or any of its cutscenes. The only snips of a plot you are given is through art work that is displayed on the walls that give a glimpse into the events that happened before the game begins. Instead, it’s the game play that plays the biggest role in telling a tale.

The Girl and The Robot are complementary characters and the game is designed around their abilities or lack thereof. The girl is defenceless against the dangers of the land but the Robot can defend her with its shield, sword & bow and arrow. The girl can fit through small crawl spaces and can jump quite high but the robot is large, cumbersome and can only lift its body an inch off the floor. This game tells the story of how the characters help each other through the puzzles, obstacles, traps and dangers of the world. Sometimes you proceed defenceless with the girl who can jump a gap that her companion can’t in order find a way for the robot to proceed further who then has to fight other robots. At other times, you’re using the robot to see platforms that the girl can’t, but which she must traverse in order to proceed.

The kicker? You can only control one of the characters at any one time. While you’re controlling the robot or the girl, the other character enters a trance and stands stoically while you go about your work. This adds an interesting dynamic to the play – sure, you could run off with one character and complete each of the actions required of them but sometimes, this unlocks a threat to your stationary counterpart. This could be like standing on a switch to open a door which releases a horde of aggressive robots on your counterpart and having to quickly backtrack to take them out.

As the game goes on, the Girl and Robot’s dependance on one another grows, a mirror of their growing relationship. This crescendos during the game’s 2 boss battles that put both characters at danger independently and simultaneously. Keeping the character you’re controlling safe, as well as the one you’re not while trying to figure out the actions that’ll beat the boss is toe curlingly tense stuff.

The Girl and the Robot feels like a remastered action/adventure game from the Dreamcast era for a number of reasons. Visually, the game has a clean aesthetic with bold colours but overuses a blue fog effect everywhere which hides a lot of the better scenery. Even with this blue fog surrounding everything (which is obviously used to hide a multitude of sins), there’s some really eye catching imagery hidden among some otherwise bland environments.

The other reason that The Girl and the Robot feels like an older title is because of the movement and combat. The girl moves like a tank with a large turning circle when running and the Robot moves like… well… a stiff robot. Towards the end of the game, there are segments full of combat and they’re frustrating because the automaton moves and responds like it’s desperate for a coat of WD40 – sluggish, delayed and slow.

Fortunately, the enemy robots are formulaic and predictable. There are a few different types – from heavily armoured pike wielding robots to partly-invisible, self destructing golems. The strategy to defeat each of them is the same. Block until there’s an opening, hit them with your sword and then quickly dash backwards to avoid the explosion when they die. Rinse. Repeat.

It’s the puzzles that save The Girl and the Robot from utter mediocrity. They’re fun little head scratchers that lattice together to teach the player new aspects before involving them in future puzzles. E.g. At times, there are white balls held on stands which, if hit with an arrow from the Robot, open a gate or door but only temporarily. The game lets you figure this out for yourself. Later on in the game, you have to hit a number of these balls to open a series of gates but it has to be in a certain order or doors will close before you get to them. It’s old school puzzles from the 90’s like this that give this game a certain quint charm.

The Girl and the Robot is available now on PC, PS4 (review version) and Wii U.

Disclaimer: In order to complete this review, we purchased a copy of the game. Please see our review policy for more information.

Tags: Flying Carpet Games The Girl And The Robot