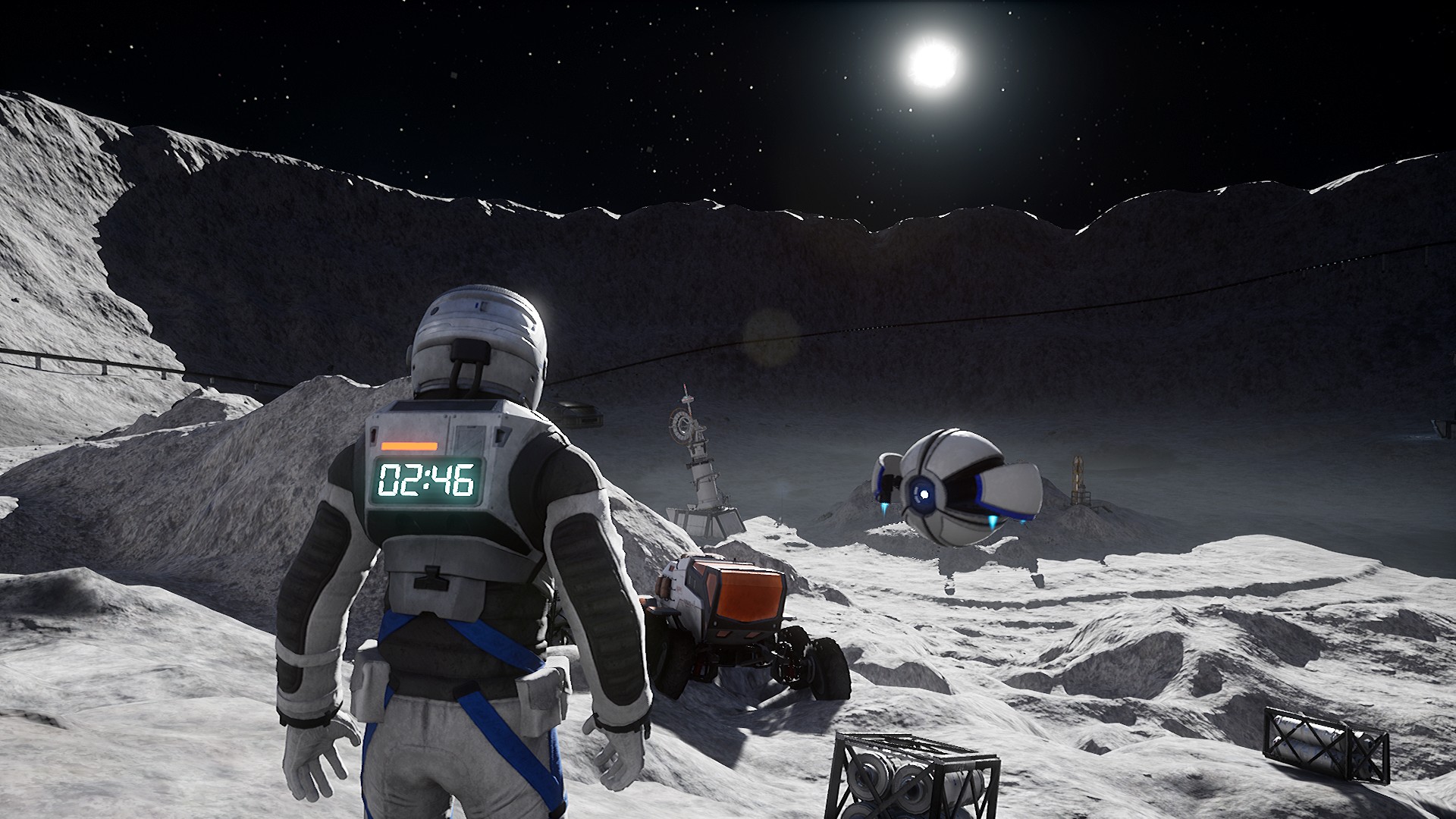 A sci-fi puzzle game that’s heavy on the ‘science’ and the ‘fiction’, Deliver Us To The Moon is almost out of this world. The Finger Guns Review;

Deliver Us The Moon is set 30 years in the future. The Earth’s resources have run out, the oceans have dried and the planet’s abilities to generate power has waned. In an attempt to solve the planet’s energy crisis, the World Space Agency (or WSA to its friends) was created. Utilising a fuel called Helium-3, the WSA set up a system called the MPT which beamed energy from a Moon base to Earth. This system successfully powered the Earth for years. That was until a few years later when the MPT mysteriously stopped functioning and all communication with the Lunar base ceased. Five years after the black out, you play as an astronaut manning a last ditch effort to reach the Moon, restore the MPT and unearth what happened. This won’t be an easy task.

When we first heard of this game at FingerGuns HQ, we all mentioned how visually similar it was to Dead Space. In reality, it’s nothing like EA’s horror title. In fact, it’s hard to pin Deliver Us The Moon down to a single genre. It’s a bit of everything. It flits between third and first person control when in gravity and when without it. There’s third person platforming, QTE moments, a few driving sections, puzzles of both long and short form and stealth sections, of a sort. It can be tense and nail biting one moment and calm and serene the next. It’s quite a masterful creation from indie developers KeokeN. While a lot of games tend to design around their limitations, Deliver Us The Moon has been developed around what it wants to portray in a way that’s best to portray it.

The mission to the Moon to save the Earth might be the top billed story in Deliver Us The Moon but it’s not the most powerful one. There’s another narrative that develops on your journey. Told through audio logs and collectable echoes from the past that are hard to miss, you uncover what happened during the days of the black out. It’s a tale of desperation, of split allegiances, of a conspiracy and, unexpectedly, of love. It takes a little time for this narrative to start to make sense. At the start of the game, there’s not a lot tying these audio logs together and you have to bear with it as it stumbles through some early exposition but eventually, it all pays off in a wonderful way.

Between those moments of narrative, Deliver Us The Moon can be nail biting. Your space suit can only contain a limited amount of oxygen and parts of this game set outside of an atmosphere. It’s during these moments when a countdown clock appears on the back of your suit – sometimes showing 3 minutes, sometimes a handful of seconds. In this time, you need to find sources of oxygen in the form of yellow canisters or refill stations (or complete whatever puzzle you’re faced with before you run out of air). A part of the game looks and plays like it could have been lifted out of the film Gravity or the game Adr1ft, spinning through space surrounded by debris, your oxygen running out, your suit beeping ar you as the clock ticks down. It’s exhilarating.

Deliver Us The Moon might be stressful at times but it’s a non-violent title. Aside from a few sections when you’re avoiding patrolling droids that will shock you if they spot you, it’s a you against the environment type game. That’s present in the puzzle solving too. Almost all of the head scratchers in this game need you to examine your environment to find the way forward, from finding door codes scrawled on a wall or finding weakened walls and destroying them with movable objects.

Thankfully you have a few tools at your disposal to help. Shortly after your trip to space, you find a plasma cutter. Unlike Isaac Clarke, you’re not using this to shoot aliens. It can be used to cut through highlighted objects in the environment like the welding around emergency air locks. This is a very cool tool but it gets a little underutilised in the latter quarter of the game. You also get yourself a companion – an ASE drone. Following you around like a lost puppy, this floating ball of helpfulness can head through pipes to circumvent locked doors, get a better vantage point on your position and activate some switches. You can take control of the drone with a click of a button and it’ll float back to your side with another tap.

There’s one solitary section of Deliver Us The Moon gameplay that I disliked – a short maze of electrified obstacles that you must navigate, in zero gravity, in a first person perspective. It’s clunky and the most awkward moment of the entire game.

Visually, Deliver Us The Moon is almost entirely impressive. The art style, drawing from NASA documentation and common, real world theories on where Astronaut tech will be in 30 years, is fantastic. It has a modern day scientific feel mixed with a touch of science fiction. The visual effects are very impressive at times. Some of the shadows in the game looks a little blocky but it’s only when you go looking for these issues do they stand out.

The game does have a little issue with freezing. Whenever you enter a new area, the game will lock up for a second or 2. The same happens when the game is auto-saving too. This is by no means game breaking but it can be a tad frustrating when it breaks your concentration as you worry about whether the game will unfreeze or not.

Deliver Us The Moon shares a lot of similarities with the ‘Walking Simulator’ genre but is thankfully far more interactive. Non-violent yet regularly thrilling, it has a surprisingly powerful story that takes a little too long to draw you in, but eventually pays off. The vast majority of the puzzles, mostly based on scouring the environment for clues and thinking outside of the box, are well designed to offer just enough of a challenge without feeling over complex.

Visually appealing with sound effects and music to match, Deliver Us The Moon is a cosmic trip worth your consideration.

Deliver Us The Moon is available now on PS4 (review version), Xbox One, Nintendo Switch and PC.