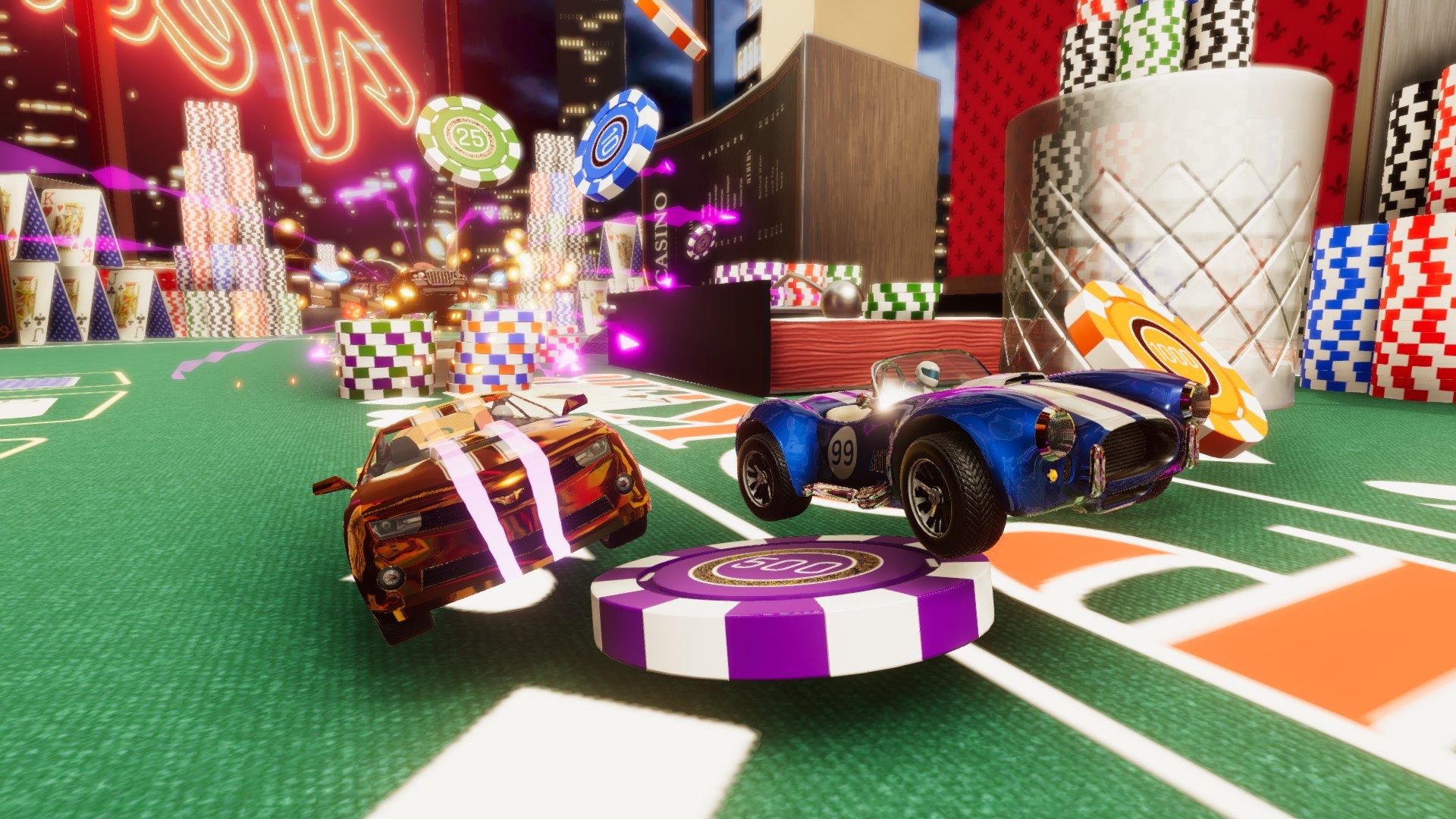 While the original Super Toy Cars failed to set the kart racing genre on fire, it did show potential. With a sequel, I fully expected Eclipse Games to capitalise on that potential, add more variety, tidy up the physics glitches so prevalent in the original and improve the visuals. Super Toy Cars 2 definitely looks nicer than the original but that’s where the improvements end. What’s more, this new game brings new issues with it.

Super Toy Cars 2 is, for all intents and purposes, a kart racing game. It follows all of the staples of the genre. No gear changes, just accelerate and break. 1 button drifting which gives you a little speed boost when it’s over. Power-up’s and weapons to collect then use on the other racers. It’s the classic Mario Kart formula that has been disseminated and mildly tweaked for every other type of vehicle over the years. Here, it’s tiny toy cars that are racing around colourful tracks made from real world items. As a premise, it lacks imagination and this game does little to use it any better than its predecessor.

The core single player content of Super Toy Cars 2 is a series of twelve competitions, each of which contain four events. There’s a decent variety of events on offer – but none of which offer any originality. There’s classic races which test the player to finish a number of laps before a field of opponents with the full use of pick up weaponry and Death Races which are the same but if you get killed, your race is over. For the purists, there are Clean Race’s which disable all the pick-up’s for pure racing as well as Time Trials which have you putting in your best times on an empty track. Also in the mix are Elimination races, where the person in last place is eliminated every fifteen seconds, Destruction races that test you to destroy consecutive Dummy cars to extend your race time for as long as possible and Destruction Derby’s which have you driving into each other. If you’re a Karting game fan, none of these modes will be anything they you’ve experienced before and none of them feature any unique aspects.

The twelve Career tournaments each have entry requirements. Initially, it’s the type of car you’re driving. Each of the sixteen Super Toy Cars in the game are allocated a class from Whacky Cars (like a van that looks very much like a VW Splitscreen) to Open Wheelers (that look like olde worlde F1 cars) and everything in between.They all have their own top speed, strength, acceleration, handling and boost stats too. Certain campaign competitions can’t be entered unless you’ve got a relevant vehicle while others are barred by progression. As you win or place in these tournaments, you accumulate Stars which will unlock further competitions to compete in as well as cash. This cash can be spent to buy new cars and pimp the ones you own with progressively more expensive upgrades. The Stars and Cash work are a simplistic loop to keep you coming back.

Or, at least, they might if the game had any difficulty to it. Head into any of the first ten competitions with a vanilla vehicle and you’ll likely have a chance of placing. Max out your vehicle stats with upgrades before entering and you’ll be finishing ten seconds ahead of the nearest car. “But isn’t that just wasting your Cash?” you might ask. Well, Super Toy Cars 2 throws money at you like it’s the US Federal Reserve trying to prop up the stock market during the COVID-19 crisis. The ability to make your car vastly overpowered after playing three tournaments makes a mockery of the difficulty levels. It took me five hours to finish all of the single player content. Compared to many other indie titles in this genre, this is incredibly poor.

That’s despite Super Toy Cars 2 trying desperately to derail my progress with crappy physics, a camera that wanted to give me a fit and other odd bugs. One of the only unique aspects of this game is its use of objects on the track. Dice, Not-LEGO-Brick-No-Sir construction bricks, giant corn cobs, toys, cassette tapes and more can be found strewn across some of the tracks (and can even be brought onto the track using a magnet power-up). Driving into these items will certainly slow you down and obscure your vision – or just snag you and stop your vehicle all together, forcing you to reset. When it doesn’t, it can make the external camera shake very quickly. The physics on these objects are unreal, as are the physics in general. Everything feels a little off, either too floaty or totally filled with lead and nowhere in between. Crashes that feel like you should be the victor often end with you smashed to pieces. It’s bizarre.

Then there’s the bugs. On some tracks, there are loop the loop sections which are actually fun to try. There’s a bit of an issue with these however. For whatever reason – something to do with placement in comparison to the rest of the track I imagine – you can often show as being a few places behind where you actually are in the race while taking these loops. This isn’t a problem during races where you’ve got to cross the finish line but during Elimination matches, it’s a real pain. Being way out in front only to see my position drop down to 3rd as I go over the loop and be eliminated from the race happened twice. The game also has a bit of an issue with resetting players to the track after they’ve careered off. During one race, Super Toy Cars 2 restored me to the racetrack looking in the wrong direction. Twice. A third time, after being reset to the track, the warning that I was going in the wrong direction beamed across the screen when I was actually looking in the correct direction. Truly bizarre.

Lastly, I need to mention the engine noises in Super Toy Cars 2. It feels like the engine noise and the pitch it’s played at is entirely divorced from the car’s speed and actions on screen. Accelerate out of a corner and the engine noise often doesn’t change, staying flat instead. With 1 car, the engine noise didn’t deviate from what can only be described as a highly caffeinated sheep bleating repeatedly as I maxed out the speed and it hit the limiter for the entire track. Bahbahbahbahbahbah. Utterly bizarre.

The description of Super Toy Cars 2 states the game has 16 race tracks and while that’s technically correct, it’s a stretch of the truth. These tracks are set in a diner, a kids toy room, a music room and a garden but number of these tracks are simply reversed then renamed to make up the numbers. Others are the same race tracks but at different times of day and some small differences. The quality of these racetracks differs wildly too. The music level, where the road beneath your wheels acts like an audio spectrum analyser that dances to the game’s music, is actually quite brilliant. The others through are quite bland to drive around and have large sections where the surroundings are either hard to identify or are bare.

We’ve been blessed to have a huge number of karting/arcade racing games released during this console generation and a surprising number of them have been of high quality. This is not one of them. Bizarre bugs and physics so bad that they make a 9 year old’s science homework look Nobel worthy, engine noises which seem entirely divorced from the speed of the cars and a broken campaign that ruins its own progression curve.

Super Toy Cars 2 is one of the worst examples of this genre I’ve played in the past few years (surprisingly not the worst). The visuals, much improved over its predecessor and a decent soundtrack are its only saving graces.

Super Toy Cars 2 is launch on the Xbox One (review version) on May 1st, 202 and is available now on PC via Steam.

If you enjoyed this article or any of our content, please consider supporting our Patreon.