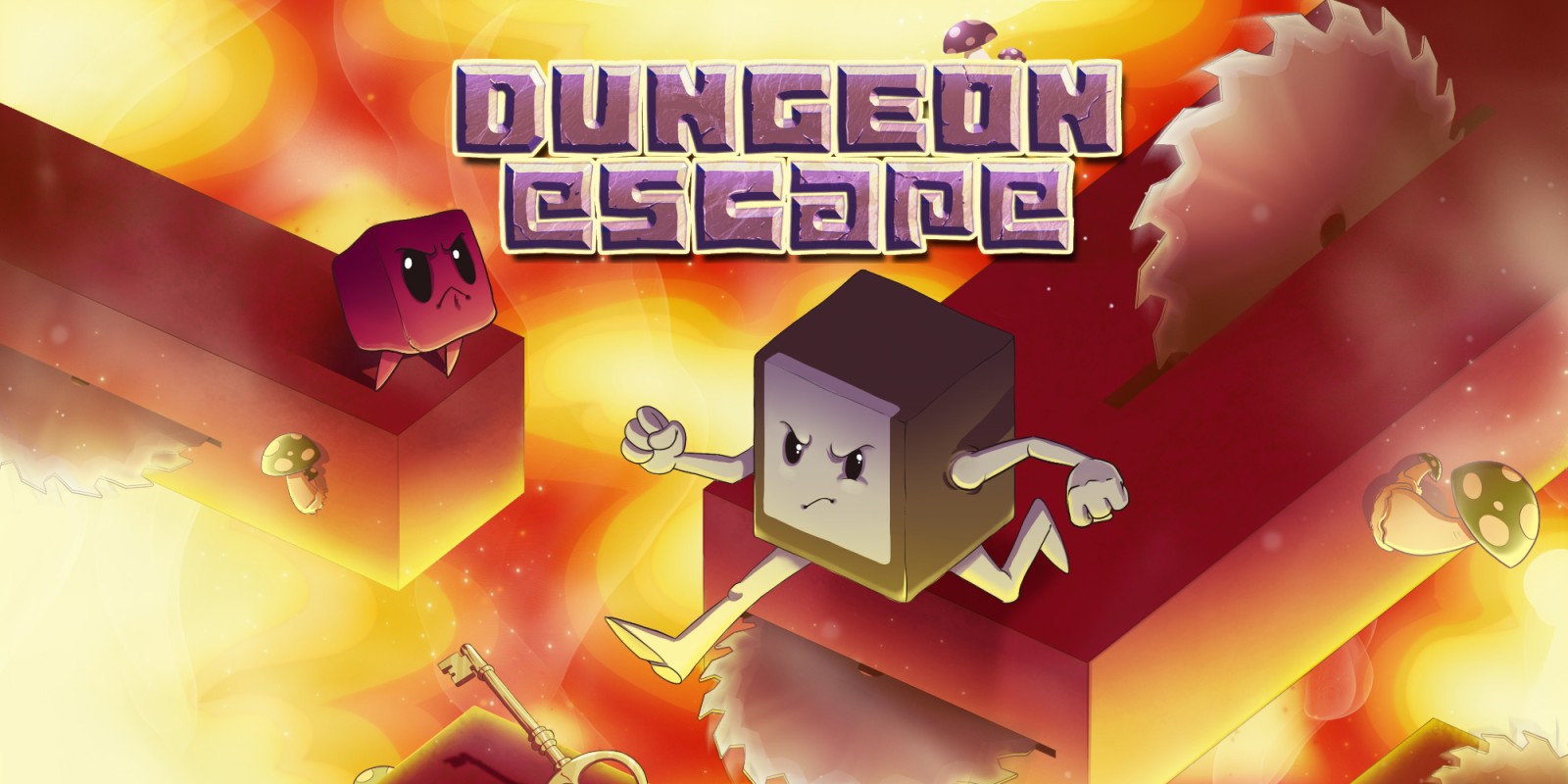 I’ve got to admit, I never quite got on with Super Meat Boy back in the day. The incessant punishment of dying over and over again just put me off ever giving it a decent attempt. Imagine my surprise (and slight horror) then, as I fired up Dungeon Escape to discover it’s almost an identical love child of said game. Even more surprising however, was that I genuinely had some fun playing Dungeon Escape, despite its short runtime and inconsistent difficulty spikes.

Dungeon Escape has you thrown straight into the first of its all encompassing 2D death-mazes immediately on pressing start. There’s no introduction nor tutorial. You’ve got to fend for yourself on this one. Each level involves you navigating a path to a key via platforming shenanigans which unlocks your gleeful escape door somewhere in the map. You have a double jump and your wits. Get the key, get to the door, move on to the next one. Sounds easy right?

Absolutely not. Lying in wait for you are a delightful number of enemies, traps, spikes, projectiles and platforming puzzles to traverse. Touching even the tiniest millimetre of anything hazardous will trigger instant death. The early levels are relatively straightforward, with simple little block enemies wandering in easy-to-gauge patterns and static traps or spikes to hinder your progress. Initial deaths are more out of curiosity and learning the game’s mechanics. It was genuinely encouraging as I breezed through the first few levels without buckets of deaths as expected. Your options are limited to double jumping and smacking the simpler enemies on the noggin to remove them from your path.

The further you make it however, the more Dungeon Escape’s difficulty begins to ramp up. Enemies and environmental hazards begin moving faster, projectiles are introduced, firing more quickly and frequently. Spikes and traps may not be visible at first, or jump in and out of the floor. The maze may be flipped upside down, enemies may have invulnerability to your jump hits and so on. The platforming also becomes more taxing, requiring more precision, speed and accuracy on the part of the player. I found myself getting into quite a good rhythm at times and actually enjoyed the challenge that was gradually introduced level-by-level. Getting past that one tricky section that had me stumped on how it could possibly be done was a satisfying blast of dopamine straight to the brain.

Unfortunately, this is one aspect Dungeon Escape doesn’t get quite right. It became quite jarring being able to breeze through a few levels at a time, only to then suddenly run up against a maze that introduced multiple new elements, while raising the difficulty immensely. The challenge was of course achievable, but the gradual slope of skill development wasn’t ideally tuned beforehand to prepare for the jump in ability the game will sometimes require of you. Occasionally, the level of timing required could be pretty unforgiving (levels 26 and 47 were noteworthy for being rage-inducing) and it did unfortunately generate some frustration.

Interestingly, after a particularly painful level the proceeding mazes would strangely be somewhat easier than what was presented before. It wasn’t game-shattering by any means, but the difficulty curve could have used some finer tweaking and balancing to even out the experience a bit more. However, your own gluttony for punishment might give you a different experience or perspective on this to mine.

Despite the difficulty, none of the many, many (many) deaths I suffered were the fault of the game. The mechanics are solid and once I realised the logic of the maze at hand, it was simply about practicing until pulling it all off in sequence. Some levels felt like lady luck had truly blessed me as my adrenaline-fueled mind somehow held it together to the end point, but overall it felt like my own skill and intuition carried me rather than blind chance.

As death is so frequent, I was grateful for the quick reload times, which gave me that willingness to hop back in (read: mash the restart button immediately after doing something stupid to get myself decimated by a rolling saw-blade). Additionally, the game has a nice aesthetic, with clearly differentiated hazards and safe zones in the maze. As a 2D platformer it isn’t going to do anything spectacular or mind-shattering, but it looks good enough to hold your attention and some of the enemy designs are nice. I especially liked the mini-green pyramid head introduced who you also can’t jump on to eliminate, differentiating them not just by look but through gameplay too.

Dungeon Escape’s soundtrack and mix of funky, techno-electronic music caught my ear more than a couple of times. Credit to the composer for masterfully managing to make me want to bop along to getting mangled for the 20th time on the same intricate trap sequence. It may not win any awards, but the music keeps the beat ticking along swiftly and is an encouraging backdrop as you try to survive the game’s more fatal elements.

With 50 levels in total, there’s enough content here for a decent romp. Your mileage will vary considerably depending on your skill level and experience with the genre of punishing 2D platformers. The first 25 of the levels passed quickly in the first hour, but the following levels took longer and numerous more attempts to successfully accomplish. Overall, you could be clocking in anywhere between 2-5 hours depending on your patience and whether you can keep a cool head.

At £3.99, you could certainly do much worse with your money. If you adored Super Meat Boy or similar games’ penchant for rewarding, punishing and reflex-tuning gameplay, you’re almost certainly going to have that itch scratched here. Even as someone who hasn’t really been a big fan of the genre before, it was welcoming enough to have me wanting to keep playing more to get to the end.

Dungeon Escape is a fun 2D platforming game with solid mechanics and a challenging but rewarding series of levels designed to test your patience and your reflexes. Despite its short length and decidedly inconsistent difficulty curve, it certainly merits its existence and will likely give you a couple of hours of enjoyment. It may be an imitation of a superior game, but sometimes, imitation can be flattering.