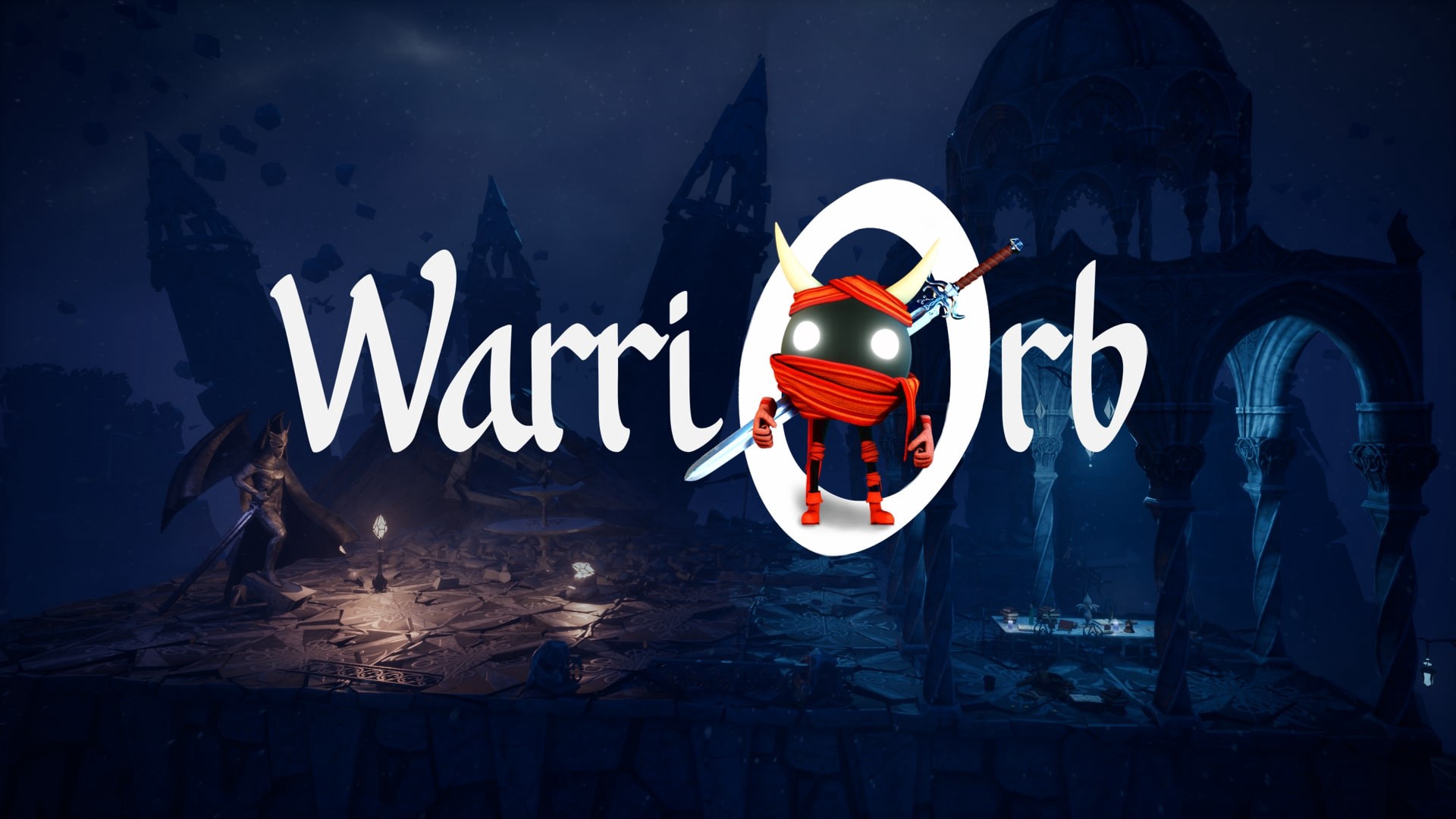 WarriOrb is, as it sounds, the story of a warrior who's also an Orb. But is it platforming heaven, or ball-busting torture. The Finger Guns Review;

Sporting graphics that would have been wince-worthy on a PS2, artwork that looks like the fake child-drawn magic cards that sometimes went round my school and a control scheme both precise and floaty all at once, it’s fair to say WarriOrb is a little rough round the edges. And uncooked in the middle.

In a case of title before idea, WarriOrb is the story of a warrior who has been transmuted into the shape of a ball, but has somehow retained both arms and legs. So he’s just lost his head really. Like Dead Cells? No, not even a little. My issues with this somewhat pointless character choice aside, the game revolves (sorry) around trying to complete challenges and dungeons in order to both free yourself from the curse and save the daughter of the mage who cursed you, seemingly by accident while summoning a demon. You know, like any Friday night at Hogwart’s really.

One of the writers is a bit of a sarcy devil, and they have peppered their wit across menus and loading screens, glibly telling you to inspect items otherwise what’s the point, or answering NPCs in the way Bart Simpson might. But whoever this is, they aren’t the lead writer, who has taken it upon themselves to attempt to graft a story onto this strange hodge-podge of platformer and RPG. Their grammar is chock-full of the wrong sentence structures and completely wrong words in some cases. Read the screenshot below. Not only are there missing words and more than one tense going on, there’s that word ‘monotonic’, which I had to Google. At best it’s a verb for monotone and means speech. And worst it’s a mathematic function. But in the context of the sentence, the word they were looking for was monotonous, as in the same thing over and over.

Speaking of which, let’s talk about gameplay. WarriOrb plays like you are moving a slug through treacle, and the treacle is the levels that feel like the handed-in-too-early project for a college games design GCSE. Sorry-looking levels have been made, but I’d hesitate to say they’d been designed.

Its half platformer, requiring you to jump and roll your way through arbitrary obstacles, and half combat with very slow and cumbersome moves where you can attack with a sword, or cast spells to buff or heal your Orb. This might have worked with some design sense applied, but it’s the absolute most basic of games. Move here, jump here, hit this, move that. No puzzle I encountered is worthy of the title of ‘puzzle’. They don’t come up to that level.

So let’s tackle platforming first. The jump command is soft and floaty, and yet the ledges and blocks you can land on are incredibly precise. You know that secret thing that good games do (like the aforementioned Dead Cells), where they let you put in the command a second late and still pull it off, or the ledge actually extends just a little further than it looks like, so that it’s more likely you’ll land on it? Yeah, there’s none of that here. It requires precision landings, and perfectly placed rolls with a really floaty jump mechanic. At the same time the hit boxes on all these obstacles bear no resemblance to the actual graphics shown, so you can land a good distance away and still hit what you were trying to avoid.

When the game says you will die a lot, you will, incessantly, but most of it won’t really be down to skill. There were sections where I’d hit one thing, usually because of the controls, then ricochet off that with a little damage, then hit the obstacle behind me, ricochet off that and then fall into a hole and die. Hit one thing only to cause a chain reaction of hits, and die.

It’s also full of glitches. You will slide through the floor. You can jump, not make a ledge and sort of slide up onto the ledge, which can be helpful, but it’s not intentional. It may be because of the beta that I played, but the first time the game loaded it caused everything on my computer to crash and my anti-virus to give me a warning. It also features some hefty load times, and for a game this unpretty, I just can’t understand why.

I feel like the makers leaned into the dying, because they realised their controls were so floaty. If the jump mechanic were as fluid and precise as say Rayman or Crash Bandicoot then you wouldn’t die like this. You are a ball. Alright, an Orb. It’s in the title. And yet beyond rolling through a few tubes, it seems rather unnecessary. As I mentioned, you have hands and feet. Other games have incorporated having a ball as the main focus of a gameplay mechanic to amazing results. Recently Yoku’s Island Express used a ball to combine pinball and metroidvania platforming, and was a blast to play. Going back a ways further, Katamari required you to roll over just about everything and everyone. Speaking of Metroid, that also has better ball skills than this.

Combat is a car crash. You have a sword because you know, they couldn’t think of any good ball-related attacks, and a small selection of moves. By the time you reach one of the horrendously designed stickmen or mouse-droid enemies, you have probably already lost most of your health platforming and then need to fight incredibly well to actually survive most encounters. And that’s hard with the aforementioned floaty controls, messed up hitboxes and slow movement. There are spells shoehorned into this as well, which served very little function early on, but if you manage to wade through into later levels you find they are pretty essential in keeping you alive during the harder fights.

Sound is kinda painful. There’s no music that will have any positive affect on you, and there was clearly little budget, so no voice cast. The characters have a strange voiceover though in a fake language, like Zelda or Ori, but here it sounds like a sort of high-pitched middle European piss-take. Each character has a little laughably bad artwork to go with them during conversations, but again, I don’t think anyone has been commissioned or involved in the project who could call themselves an artist. They look like fan-art drawn by a ten-year-old.

The difficulty is so based on the terrible programming of the game, that the developers have added what has to be my favourite ridiculous mechanic I’ve seen in a game in a while. You can summon a special angel and place them before a particularly impossible section of ricocheting platforming hell, so that you can respawn there when you die a dozen times, instead of all the way back at the head of the dungeon. What’s the point of this? Just have a retry function, or do away with the respawning at the head of the dungeon. And the best bit? You can’t call the angel back, so you have to find a safer way back to that section later, or redo it in reverse to collect the angel again, defeating the purpose of having it in the first place.

At one point I quit, unable to face any more that evening, and I knew it might lose a couple of minutes since the last autosave point. When I loaded up for another fun round of torture, the game had not only put me back a few minutes, but had now erased the existence if the item I had used to get to the next area. I could no longer prove my worth to the strange golem and progress. It had saved both after I got it, stopping me getting it again, but without the item in my inventory. I thought I’d broken it, only to end up exploring the castle and sewers a little further and finding a completely different level where I was able to earn the same item again from scratch in a completely different scenario. I really don’t know what happened.

WarriOrb is a painful experience, and your enjoyment levels will depend on how masochistic you are. I found no impetus, no driving force to get the wisecracking Orb from A to B through any more sorry-looking levels. Very quickly I had had enough of retrying broken platforming sections two or three dozen times, for what is essentially no reward, except more of the same relentless, slow, monotonic boredom.

You would be best advised to avoid this ball and chain.

Developer: Not Yet
Publisher: Not Yet, Maple Whispering Limited

If you enjoyed this article or any of our content, please consider supporting our Patreon.