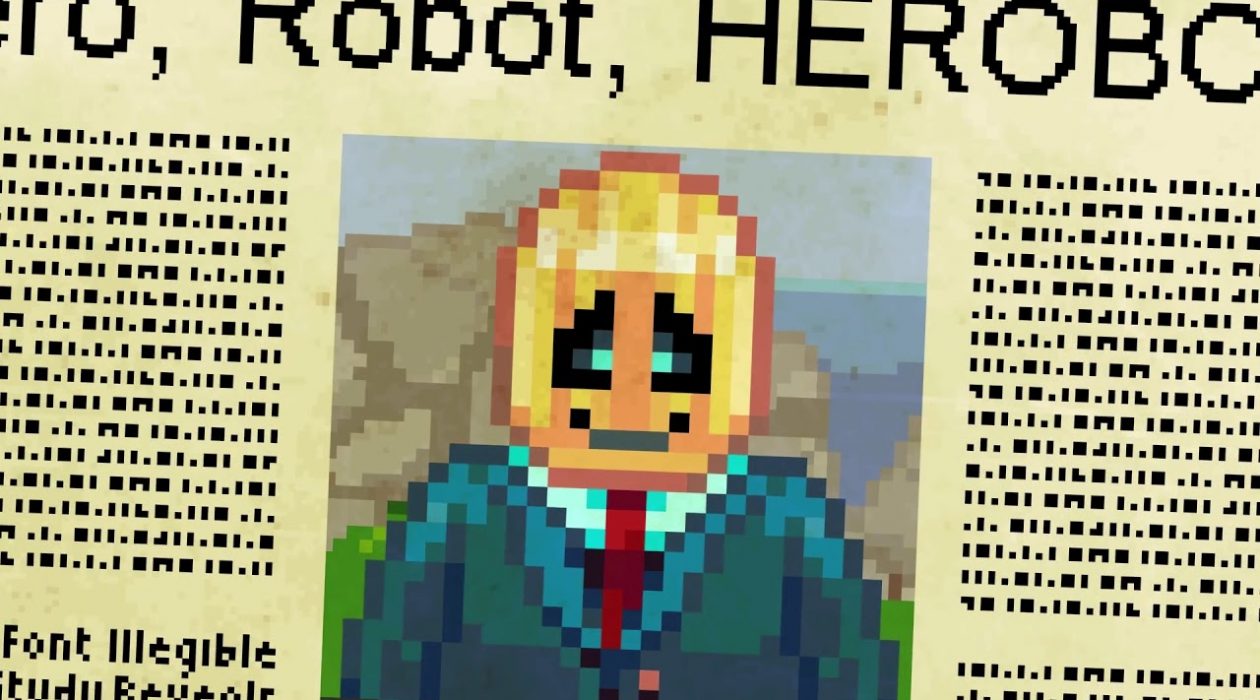 A handcrafted pixel platformer, Horace is a charming and charismatic game. The Finger Guns review.

A handcrafted pixel platformer, Horace is a charming and charismatic game. The Finger Guns review.

7 years. That’s how long it took veteran artist and developer Paul Helmen to create Horace. For some indie developers, the mere mention of working on the same game for such a length of time would make them break out in sweats – but for Paul, it has been a labour of love. When I spoke to him back in January, he said he was making a game he’d “always wanted to play” with a plot that was more than just “the princess is in another castle”, complete with full pixel art cut scenes and no speech bubbles. When developers say “I’m making the game I’ve always wanted to play”, it’s often the case that what they’re making already exists. It’s just that they hadn’t played it yet. But with Horace, that doesn’t feel like the case. This game has a flavour all of its own, reminiscent of late 80’s/early 90’s comedy movies but with narrative delivery that’s unique to the platforming genre.

Horace is the story of a robot. The game begins with his creation at a factory and his delivery at his new home, “the old man’s” house. Here, he gingerly takes his first steps into the world and meets his new family – a girl who’s trust he needs to earn, a butler with an attitude problem, a chauffeur with a sketchy past, the caring lady of the house and an elderly relative with a bit of a hording problem. The first few hours of the game charts Horace’s introduction to the world, human interaction, art, education, entertainment and video games (with which he falls hopelessly in love with) all told through the naivety and inexperience of a new robot’s eyes. He doesn’t get jokes, takes things at face value and misunderstands things but as he continues to learn and be upgraded by his new family, his character does too – until something terrible happens which quite literally blows his mind. Horace shuts down, becomes un-responsive and is put away in storage until years later when he reboots to find the world in which he was only just finding his footing has fallen into conflict. He sets out on an quest to find out what happened, what has become of his family, what his very existence has to do with what has befallen the world and to clean up 1 million pieces of garbage (which he mistakenly believes is the meaning of life). To say any more would be to spoil one of most heartfelt, funny and charming narratives I’ve had the pleasure to experience in years.

The plot of Horace is played out in cut scenes that match the in-game pixel art work exactly and they’re entirely narrated by the robot himself. Much of the humour in the game comes from the misinterpretation that Horace is placing on the on-screen events that will be immediately understandable to the player. For example, in an early game conversation, the chauffeur asks the robot to “pull his finger” which he dutifully does. “I got the joke, it wasn’t very funny” exclaims the bot. The way the narrative is delivered, via pixel art short movies with incredible attention to detail in every nook and cranny feels gives this game a filmic feel at times. The only drawback to this type of art style being delivered in this way is that when there’s an extreme close up, it can be difficult to see what’s going on until your eyes adjust. This only happens a handful of times in the entire game but worth mentioning regardless.

Horace is also packed full of pop culture references to movies, video games and TV shows. At one point in the game, he is told to put a blank expression on his face in order to fit in with other robots, which he attempts. He’s then told his face needs to be “Blanker”. Being the video game addict that he is and misunderstanding completely, he pulls the pose of Street Fighter’s Blanka doing the electricity move. His cohorts pull a suitably unimpressed face. While pop culture references in video games are not something I typically enjoy, with too many games relying on the nudge and wink they give to other media as their own charm, that’s not the case with Horace. None of the references feel forced in this game, as if they’re natural responses by an artificial intelligence that has a penchant for Pong. The game carries its own personality, delivering its own jokes and balancing these out nicely with the nods to pop culture. Throughout Horace, there’s also a plethora of mini-games to play too. Early on, you need to win a game of almost-but-changed-likely-because-of-copywrite Pong. There’s a section of a cut scene which because interactive like space harrier. There’s arcade games inspired by classics to play too, like Linedance Apocalypse (Space Invaders), DayOff (A Ferris Bueller meets Out Run racer) and more. Each and every time you reach one of these mini-games, they’re surprising and immediately smile educing.

Outside of the narrative and mini-games, Horace is primarily a platformer. The main aim of almost every screen in the game is to get from one door to another while avoiding a variety of things that will kill the protagonist like barbed wire, exposed cables and more. Hazards are well highlighted in the game, often flashing or show obvious danger, but if you do happen to fall foul of them, the protagonist will respawn at either the start of a particular scene or at a checkpoint (thanks to a ‘Lazarus chip’ installed within Horace). There are a handful of area’s which are littered with dangers that have some quite punishing checkpoint placement, asking the player to overcome a lot in one fell swoop which can be frustrating. The majority of the game is fair but challenging, however. Things can get a little twitchy, especially during boss encounters (and I stop short of calling them boss ‘battles’ because that’s not what they are), and certainly gave my arse cheeks a good workout with all the tensing I’ve been doing.

As you progress through the game, Horace is given new abilities and upgrades such as the ability to walk on any walls and ceilings (which also flips the relative effect of gravity of the game in the direction of your feet too), shield orbs which allow you to take a hit fits from Hazards before respawning and gloves to pick up and throw objects. Each time the protagonist gets an upgrade or new item, it allows him to explore more of the world like a Metroidvania while also making the platforming a little bit more complex each time by combining all game mechanics together into a tight, demanding trial of your finger dexterity. While there’s a little amount of trial and error involved in some sections of Horace, the majority of the game is intelligently designed to draw your eye where you need to be headed.

This is helped immeasurably by the visual style which is among the best pixel artistry I’ve seen in quite some time. Highly detailed yet clear and easily digestible with the eye, you can really see the care and attention that Helmen has put into this game. Many of the scenes have some of the nicest parallax backgrounds since Aqua Kitty UDX too, really giving the feeling of depth the world. The animations, both in game and in cut scenes, are top class too. It’s the little touches that stand this game out from the crowd of other pixel platformers – birds that fly away when you get close, for example. While many games of this ilk try to give the impression of a wider world, Horace achieves this with ease.

The art style is matched by a perfectly pitched soundtrack including a synth driven version of Camille Saint-Saens’ Dance Macabre. The sound effects, including a charming squeak when Horace walks and jumps, are top class too.

Horace is a very, very good game. A humour filled but emotionally charged plot delivered via beautiful and well-paced cut scenes, some of the most gorgeous pixel released this year, a smorgasbord of pop culture references and mini-games and a hand crafted feel to the platforming, as if everything has been placed with care and attention, combine into one of the most surprising games of 2019. When Paul Helman set out to create Horace 7 years ago, along with his friend Sean Scaplehorn, he set out to create the game he’d always wanted to play. As it turns out, it’s a game I’ve always wanted to play too. I just didn’t know it until I played Horace. It’s a little too punishing at times, asking the player to do a lot without dying or have to start quite a ways back, but that’s a small blemish on an otherwise exemplary game.

Horace is available now on PC via Steam.

In order to complete this review, we received a promotional code from the publisher. For our full review policy please go here.