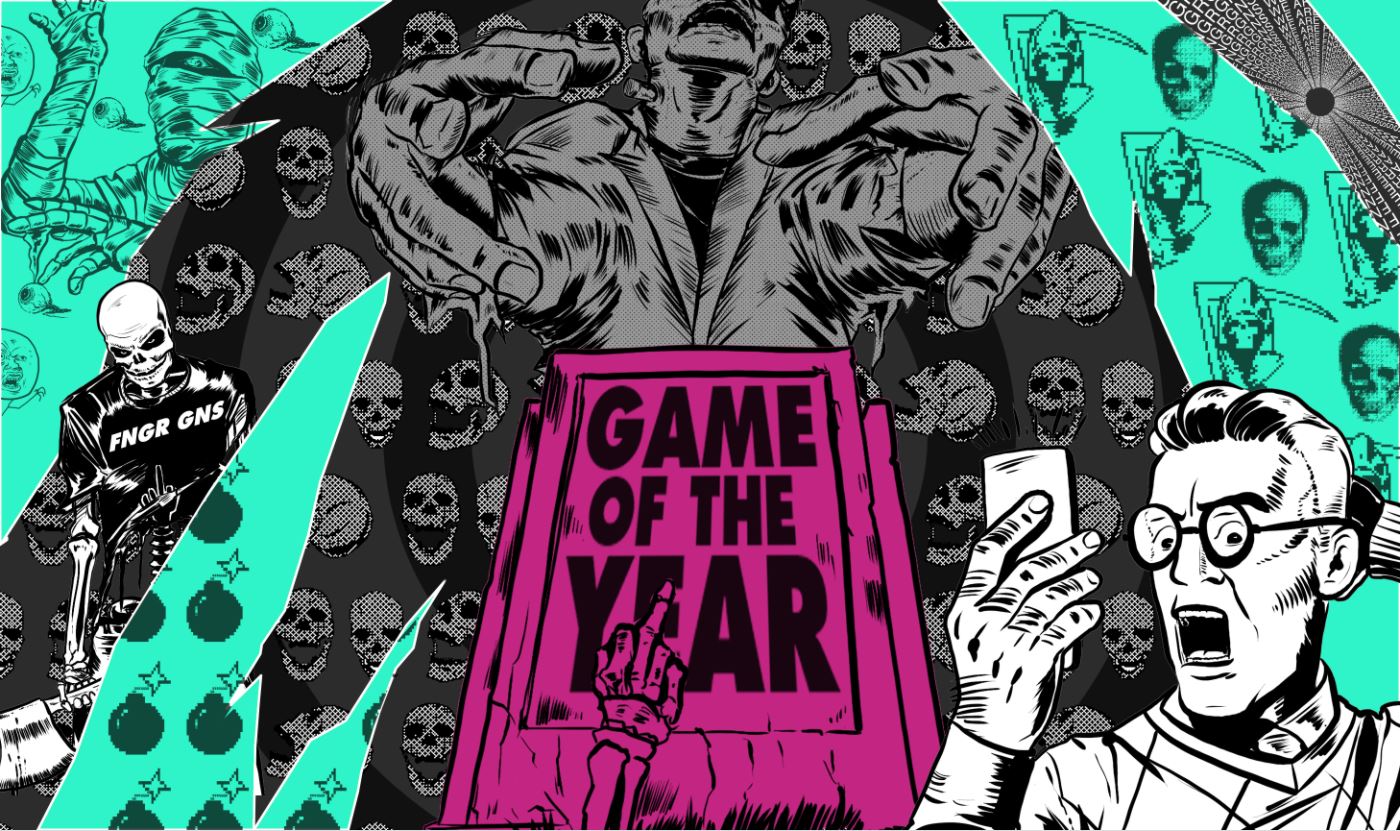 Which games have secured victory? Find out after the jump.

And there goes another year in gaming and well, what a year it was. From the launch of a mighty new Nintendo console, the ridiculous list of essential PlayStation exclusives and the release of Project Scorpio, there’s been a bundle of fantastic games available for each system almost monthly, and it’s been a struggle to decide what games to pick up throughout the year, seeing as we’d probably be living in the boxes of our consoles if we had to buy them all.

It’s been a difficult one this year to choose just what our Game of the Year was going to be, and as we’re not so much a hive mind here at Finger Guns but more a collective of differing opinions, we’ve each chosen our Top 3 games of the year which could all be worthy winners, and this way we ensure that each game gets fair recognition.

So without further ado, we’ve listed our favourite games on the year below. What’s been your games of the year? Let us know in the comments.

WHAT REMAINS OF EDITH FINCH

Some games stick with you. They sit in your mind just below the surface, stirring you for days, months or even years after the credit roll. What Remains of Edith Finch has haunted me since April 2017 and it doesn’t look like it’ll be leaving my mind for a long time to come. The exploration of the peculiar lives and the bizarre deaths of the Finch family was so beautifully told, so visually arresting and soul-stirringly well written that it’s easily one of 2017’s best games and is among the finest games I have ever played.

Breaking a 7 year annual release streak, Ubisoft sent their hooded assassins off on a year long hiatus to give the next installment chance to breathe and develop – and develop it did. A myriad new mechanics, a pair of main protagonists with a hearty personality, masterful quest and story writing and a beautifully realised Ptolemaic Egypt make Origins one of the finest open world action-adventure games to release in recent times.

The first time I took down a Thunderjaw, my heart was beating out of my chest and it was one of many memorable moments contained within the excellent Horizon Zero Dawn. The team at Guerilla Games created one of gamings most interesting and original rogues gallery with the robotic beasts of the post apocalyptic world that heroine Aloy inhabits. Visually sublime, even on a bog standard PS4, Horizon Zero Dawn is one of the most engrossing and well designed games of 2017.

NIGHT IN THE WOODS

Night in the Woods is my game of the year and well, it could be my game of the last two years. This little Kickstarter game that took on the world and pretty much won was one of the only games of 2017 that I finished in a single sitting, I just couldn’t put it down. The vibe of protagonist Mae and her longing for something new and something wild resonated with me on a personal level, the core of wanting to leave a sleepy town to explore just what’s out there and instead finding yourself going back at the beginning hit me hard, and sympathising with Mae’s narrative made the connection to the game all the more powerful for me.

Mae’s close friends that still remain in their hometown of Possum Springs and their excitement of seeing her again after so long is a moment that makes your heart soar, and there isn’t a single beat wasted in the dialogue between the characters (the ‘I’m proud of you’ discussions with her parents are poignant and extremely touching). It’s atmospheric, it’s beautiful, it’s glorious. It’s Night in the Woods and it’s one of the most wonderful experiences I’ve had as an enthusiast of this industry for over 30 years.

Yes. Super Mario Odyssey is one of the greatest Mario games ever made. Yes. It’s an essential purchase on Switch. Yes. Your life will be simply worthless without it. Too much? Perhaps, but Nintendo smashed the gauntlet down in 2017 and finished their assault on the industry with one of their crowning achievements, which is saying a hell of a lot. Odyssey wasn’t just a great Mario game, it’s a really terrific game overall and one of those ‘genre-defining’ experiences, in the same was Breath of the Wild did for the open-world RPG. It takes the 3D platformer to yet another level and reminds us why we missed Mario, and Nintendo, firing on all cylinders.

There are moments in Odyssey which are perhaps the gaming moments of the year (New Donk City finale, that damn dragon) and for me, just pips Breath of the Wild for me. Zelda was astonishing, but I had the biggest smile on my face playing Odyssey that never really disappeared. Once I beat the game I couldn’t wait to jump back in to hoover up the remaining moons. I still have over 100 to go. Nintendo, I salute you.

I could talk for hours about Sonic Mania, and how it brought back the greatest memories of my childhood, how it reminded me that when Sonic is good, he’s bloody fantastic. I could say that Sonic Mania marks a new beginning for the blue blur. I could say that my all-time favourite gaming character has finally been rewarded with the respect he deserves after what feels like a lifetime of mistreatment, but I’m gonna pull a paragraph from my 10/10 review which I think sums it up;

‘Sonic Mania is exactly what the franchise needed. I don’t say this lightly, Sonic 2 is my all time favourite videogame, so if it was going to beat it, it would have had to be something next-level, something so resoundingly spectacular. Sonic Mania is all of these things and more. An absolute masterclass in platforming level design, a passion project unlike anything I’ve seen before, made by fans for the fans’

Thank you, Christian Whitehead / Headcannon / PagodaWest Games. Let’s have another.

Superhot VR kind of came out of nowhere, and when it did find its way to my PSVR it literally blew my mind. As a game it couldn’t be simpler, just shoot the bad guys before they shoot you. Simple right? But there is a nice, a really nice mechanic. The slower you move in real life, the slower the game runs. A gentle sidestep in real life converts to a John Woo slow motion wonder scene in the game. Dodgin’ bullets and watching them fly past you is living out all your movie fantasies. Want to replay the famous scene from The Matrix where Neo doges all those bullets? Superhot has you covered. It is so much fun to play, you will be grinning ear to ear throughout and is arguably the best showcase of how VR can transform a game. All that needs to happen is Superhot has a nice hot and steamy fling with The London Heist and have some kind of super hot gangster shoot fest love child. Superhot VR is easily a Game of the Year Contender.

There isn’t much more I can say about Super Mario Odyssey that Rossko hasn’t already covered. As a game, it’s the best in its genre absolutely no doubt about that. When I first saw the trailer, I was admittedly worried. It didn’t look particularly exciting. I then played Nintendo’s new Zelda game and I didn’t like that at all so I started to worry about Super Mario Odyssey. I mean I have longed for a proper Mario game since Super Mario 64, so this was a big deal for me. Of course, I had nothing to worry about. SMO is astonishing in its creativity, perfect in its platforming and gameplay which I fear will never be matched. The hat mechanic is just genius. It is everything I have ever wanted from a new Mario game. Taking the best bits from Super Mario Sunshine and Galaxy and putting them in a fresh new Super Mario N64 type experience. It’s beautiful, it’s magnificent, it has to be game of the year.

I’m actually happy to report there are two VR games in my game of the year choices. Superhot, which was just amazing, but I couldn’t have a game of the year without Resident Evil 7 VR being in there. It is the game that single handily made me realise that VR can literally add a new dimension to gaming. The regular game I didn’t think much of, but once you play it in VR you’ll never go back. It’s a game that blew my mind, creeping around a house, literally leaning to peer around corners. Sneaking around avoiding a shovel-wielding madman. Sounds like a normal game except you were there. And it was frightening, nauseating, amazing. No matter how good graphics get, no matter how vivid 4K TVs can make games look, nothing, and I mean nothing will make you feel as sick as when you get rammed by a shovel and lifted high in the air. You could see it, feel it as if you were there and for me, if developers continue to do harness VR in this way, then gaming has changed forever.

That’s our list! Disagree? Of course you do! Sound off below and let us know what we missed out. Here’s to 2018! Norman Reedus having babies and Shenmue 3. What a world.

The Villains are the focus of the latest LEGO Star Wars: The Skywalker Saga trailer
Saints Row IV Re-Elected (Switch) Review – The Saints Are Coming…again
Metro Exodus Enhanced Review (PS5) - Back On Board