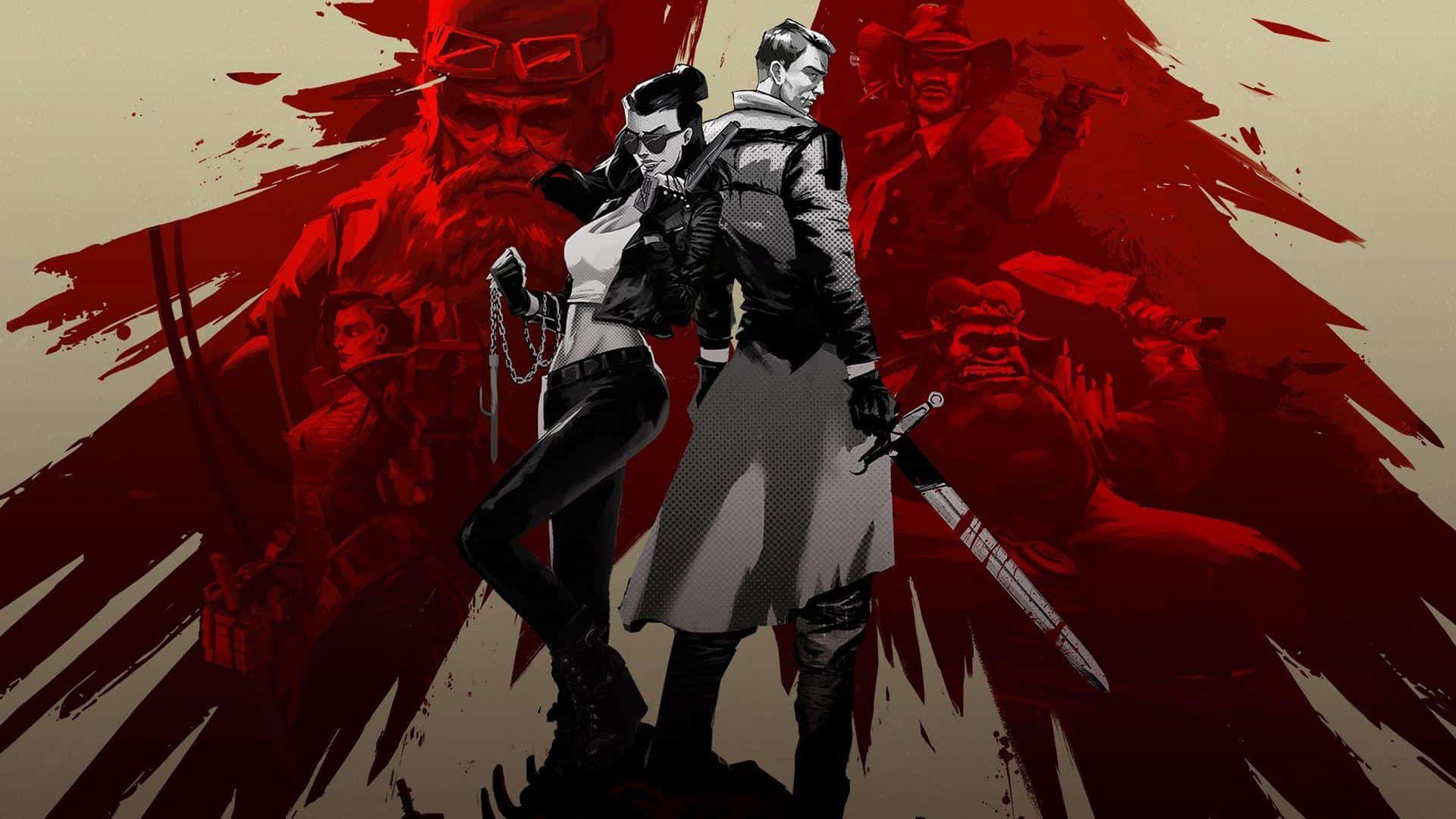 I’ve read these words more than a thousand times during my time with ‘God’s Trigger’, a new top down twin-stick shooter from developer One More Level and published by Techland. While that might sound frustrating, each and every death in this game serves as a learning opportunity, of what went wrong and what to do differently next time and thanks to a generous checkpoint system, focuses its core into a looped ballet of hot lead, demonic powers and heavenly abilities.

In God’s Trigger, you play as Harry, a fallen angel and Judy, a demon, who bump into one another while both investigating the presence of the 4 horseman of the apocalypse on Earth. They decide to work together, combining their holy and unholy powers to uncover a conspiracy and otherwise splatter the innards of everything that stands between them and their goal across the floor. Spread across five chapters, each of which rings in their own tonal and mechanical changes, God’s Trigger is a challenging title that’s akin to Hotline Miami and Mr Shifty. Played in a top down perspective, the aim of 90% of the levels in the game are to reach and exit point with boss battles punctuating each chapter end.

Despite being supernatural entities, both Harry and Judy are relatively fragile. A single bullet, thrown dagger or explosion is enough to shift them from their mortal coil. This makes God’s Trigger a tense and deeply satisfying affair. You’ll die a lot in this game, as I previously mentioned, but when you finally overcome a tricky section, the feeling of accomplishment is on par with that of a From Software title.

You can switch between the two ‘Heroes’ on the fly which is an essential part of progressing as both characters have their own unique un/holy abilities to use – Harry has a short melee attack and can dash through fragile walls while Judy has a longer ranged chain melee attack and can transport short distances through fences – but they can both wield any weapon they steal from fallen enemies or find in special boxes too. These include pistols, baseball bats, machine guns, flame throwers, Van Helsing-esque crossbows, holy hand grenades, swords, proximity mines and a tonne more.

Each of the levels in God’s Trigger offers up a multitude of murderous options for the player to take. Get behind an enemy and you can take any enemy out stealthily with a quick press on the triangle button – but doing so means their weapon disappears with them. It’s possible to ‘off’ an entire room of bikers/cultists/soldiers without anyone becoming aware for which there is two states – when an enemy turns yellow, they’re investigating something like the mutilated corpse of one of their pals and red, when you’ve been seen and they’re in all-out attack mode. Using these two states, you can lure enemies away from their usual patrol paths, adding a hefty level of strategy should you so wish. Alternatively, you can go in all guns blazing by bashing down a door (which will stun any villain waiting behind it), bashing through a wall or even firing a weapon through a door and blasting it from its hinges. The game is designed to offer plenty of options to the player and often encourages tactical play like luring waves of foes into hellish traps. Alternatively, you can freely look at the area ahead by holding down the L1 button and tag enemies with a press of the R3 button. When you do go bursting into a room, when you fire, you’ll automatically target the enemies you tagged which makes taking out a particularly packed room a tad easier. Doing so costs energy but if you’ve got enough to spare, running into a corridor and mincing three enemies in three gun shots allows you to live out those John Wick daydreams.

During each chapter, there’s at least one set piece level too. These vary from a section that has you take control of a turret, fighting back a bumper wave of cowboys (it makes more sense in the game, honestly) to a level where Judy uses a sniper rifle to cover the advance of Harry. At various junctions in the game, you’re surrounded by enemies and the game goes into a slowmo bullet hell screen, testing the player to avoid certain doom and kill everything in your path. There’s even an insta-fail stealth section that, miraculously, isn’t instantly terrible and is instead, pretty damn fun. If variety is the spice of life, God’s trigger is a Naga Viper Chilli packed curry with a side serving of hot wings.

The boss battles are the pinnacle of God’s Trigger – except one, which is a little too fiddly for its own good. While most of the game is twitchy and requires split second decision making and instant reactions, the big bads here will really push your thumb’s to their limits. There’s a strategy to each of them which requires a touch of trial and error (more of those “You’re Dead” screens of course) and mental gymnastics to eke out but even when you know what to do, they’re going to push you and punish you if you’re not up to the challenge. Defeating them is such an exhilarating feeling, which is helped by some well-placed checkpoints after defeating a particular “wave” of the battle meaning they don’t become too onerous.

At the end of each level, both Harry and Judy are awarded experience depending on how many enemies they’ve killed individually, how quickly you did so and how high a multiplier you achieved and they’ll eventually level up. As they level up, new abilities are rewarded and previously unlocked abilities gain new modifiers. These modifiers allow you to alter the way the abilities work. For Harry, you can eventually make is so that his melee attack knocks back bullets towards their origin. For Judy, you can extend her chain melee attack so that it stretches almost the entire length of the screen and eventually, it’ll steal weapons from fallen foes. Both of the characters also have supernatural abilities like creating a hellish whirlpool which can stun (or even kill) enemies, freeze time or make themselves invisible. Using these abilities costs some energy which is built up by killing folk, but the cost can be dropped by using the modifiers, enabling you to use them earlier in each level but potentially nerfing their potency.

There’s also collectable magazines (which unlock a page in a ‘Helldude’ magazine which is kind of like the devilish version of Loaded mag complete with scantily clad women) and perks that can be collected by going off the beaten track on each level. These perks offer things like a slower cooling multiplier bar, a full clip of ammo when you pick up a weapon, ricocheting bullets or co-op focused upgrades like free revives. The catch is that you can only equip one of these perks at a time.

Yes, God’s Trigger does have local co-op, but unfortunately I’ve been unable to test this facet of the game during my review period. If I get chance to play this in co-op after the review has gone live, I’ll be adding some impressions here too.

Visually, God’s Trigger goes through a lot of different settings from a Western styled film set, a gothic church, biker bars, a smelting plant, an army base and even more heavenly settings and while none of them are really pushing the graphical prowess of the PS4, they’re thematically aligned and easy on the eye. One really stand out aspect is the visual design of the 4 horsemen themselves which are all imaginative and innovative takes on the harbingers of the apocalypse. It’s a stylish game, especially when you’re coating the scenery in the sanguine shades from anything that dares get in your way. This is matched by a varied soundtrack that complements the game’s settings admirably.

Performance wise, the game runs incredibly well. I didn’t experience any moment of slow down, stuttering or frame loss during my time with God’s Trigger, even when the screen was jam packed full of things trying to kill me and I was blowing stuff up. There was one very odd moment when I held down the Circle button to swap between Harry and Judy and the character completely disappeared, meaning I couldn’t attack but I could just float around the level and through walls. This was instantly fixed by choosing to restart from the last checkpoint in the pause menu. The game also blue screen crashed on me towards the end of the game but allowed me to proceed through the same section unabated at a second time of asking.

God’s Trigger is a smorgasbord of twin stick goodness. It takes the challenge of Hotline Miami, the genre innovations of Mr Shifty, blends it with a fun, pulpy if shallow narrative and then blends it with as much blood splatter as humanly possible. It doesn’t do anything particularly new but it does provide a twitchy, immensely gratifying 9 hours of action with the occasional satisfying set piece. Some tiny bugs aside, God’s Trigger is the schlocky game equivalent to Kill Bill and that gets a big thumbs up from me.

In order to complete this review, we were provided with a review code from the publisher. For our full review policy please go here.

Nacon Announces Hell Is Us, Creepy New IP From The Creative Director of Deus Ex
Lake Review (PS5) - Time Marches On To A New Console
The Town of Light PS4 Review: Uncomfortable and sadly, very real