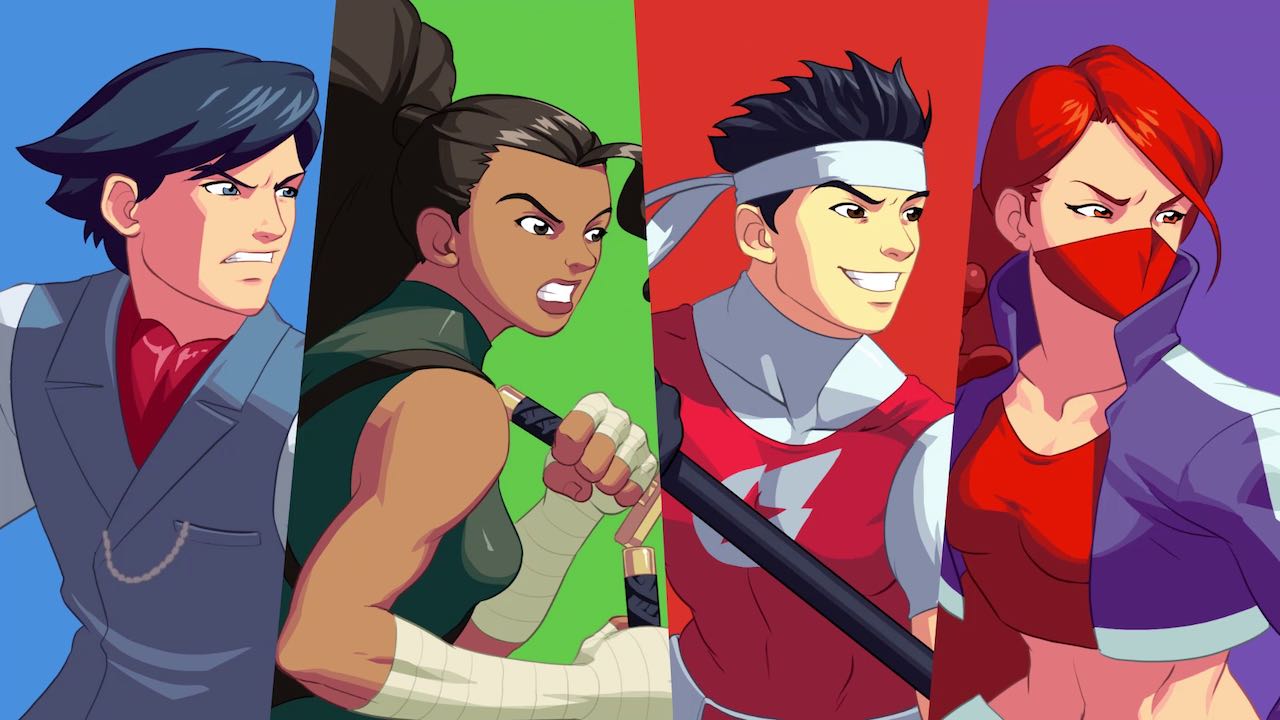 Let’s just get this out of the way at the very top. When SkyScrappers launched on PS4 way back in 2015 I may have fallen ever-so slightly in love with it. After playing it at that years EGX Rezzed, I was excited to see just how the experience would translate once I was at home and thankfully, I wasn’t disappointed. It was a (relatively short) blast of classic beat-em-up nostalgia with a neat twist that allowed me to experience something I fondly remember from my childhood with brand new eyes. Plus, there’s nothing else like it. A vertically-orientated fighter? It all fell into place for me. It was exactly the tonic I needed after being burned out on that years AAA offerings (Halo 5, The Nathan Drake Collection, AC Syndicate).

Honestly, the very idea of a Switch version had never crossed my mind. I thought the PS4 and PC versions of the game was the end for SkyScrappers and never once considered it was on the cards for Nintendo’s handheld hybrid. Obviously, I should have been paying more attention. The system is a hot-bed for the best the indie community has had to offer for the past few years and I count SkyScrappers within that pantheon. To say I was delighted when this happened was quite the understatement.

If you don’t know about SkyScrappers, it’s a fighter which sees players fight their way up crumbling buildings whilst navigating clutter and ensuring their opponents don’t get any higher than they do. It’s up to the leading player to keep the camera on them, keeping control of the pace and ensuring they’re dealing enough damage to the opponent that they can’t keep up. It’s a brilliantly simple concept. Matches can be won before reaching the top if you inflict enough damage, though it’s hugely satisfying if you do reach the top. Each player have themselves a weapon (though they’re not all that different from each other, rather a prop unique to each character), that can inflict damage, along with a ground pound that helps out should you be quick enough to pull it off before your opponent is heading up the skyscraper.

Whilst SkyScrappers on Switch retains the core gameplay which made me go giddy for it upon release three years ago, it’s a shame the characters haven’t been added to. Your starting line-up of four characters are all you get throughout and though there’s a cleverly implemented story based explanation it would have been nice to see a little more variety in the selection this far down the line. I understand this version of the game is a port (and created by a different studio, no less), though it would have been cool to see perhaps a couple more maps and characters added. As such, you get what you’re given and whilst there’s nothing particularly wrong with that, a few additions in this instance would have been welcomed. Still, I never expected SkyScrappers on Switch and now it’s here I just want more stuff so perhaps I should shut my entitled mouth up?

By the games very nature, there’s always a fair bit going on during matches, whether it be tearing it up buildings across the falling debris or taking on foes whilst attempting to navigate upwards. This is obviously the main mechanic of the game but in a handheld setting this does bring up a bit of a problem. Obviously, being scaled down to fit on the Switch screen was going to hit the games core gameplay by the sheer fact it’s somewhat difficult to keep an eye on your character at times. They can get slightly lost in the fray which is frustrating, especially when your intention is to simply get to the top of the skyscraper before anyone else as fast as you can. It’s interesting how aware you become of the size of your character when you’re not playing in docked mode and in four player matches it’s even more difficult (though this is perhaps the fault of the size of the screen itself rather than the game). The camera just seems a little too far away when playing on the Switch screen. In docked mode, this isn’t much of an issue.

Of course, the game being on the Switch brings along its secret weapon, Tate Mode. Well, Tate Mode simply allows you to play the game vertically by turning your Switch screen on its side and unlocking your Joy-Cons. This is exactly how SkyScrappers was always meant to be played. By turning the system vertically you can scrap across falling debris turning the Switch into your own skyscraper (kind of, you get where I’m going with this, right?) and it feels fantastic. Short of turning my flatscreen on its side I had always been curious how SkyScrappers would play in an arcade setting and now, thanks to the ingenuity of Ant Workshop that is somewhat realised. It’s not the first Switch game to do it, but it’s the one that has utilised it most effectively. Tate Mode is the closest you’ll get to having a SkyScrappers arcade cabinet in your own home.

So if you wanted SkyScrappers from the PS4 and PC on your Switch, you’ve got it. You have the definitive version thanks to the brilliantly executed Tate Mode, allowing SkyScrappers to be played in a far more natural orientation. There lack of any real updates elsewhere is a bit of a shame but let’s be honest, I’m just glad I now have SkyScrappers on my Switch. It’s a welcome return to a game I thought I’d never see anything more of again and that’s just fine by me.

Disclaimer: In order to complete this review, we were provided with a review copy from the publishers. For our full review policy please go here.