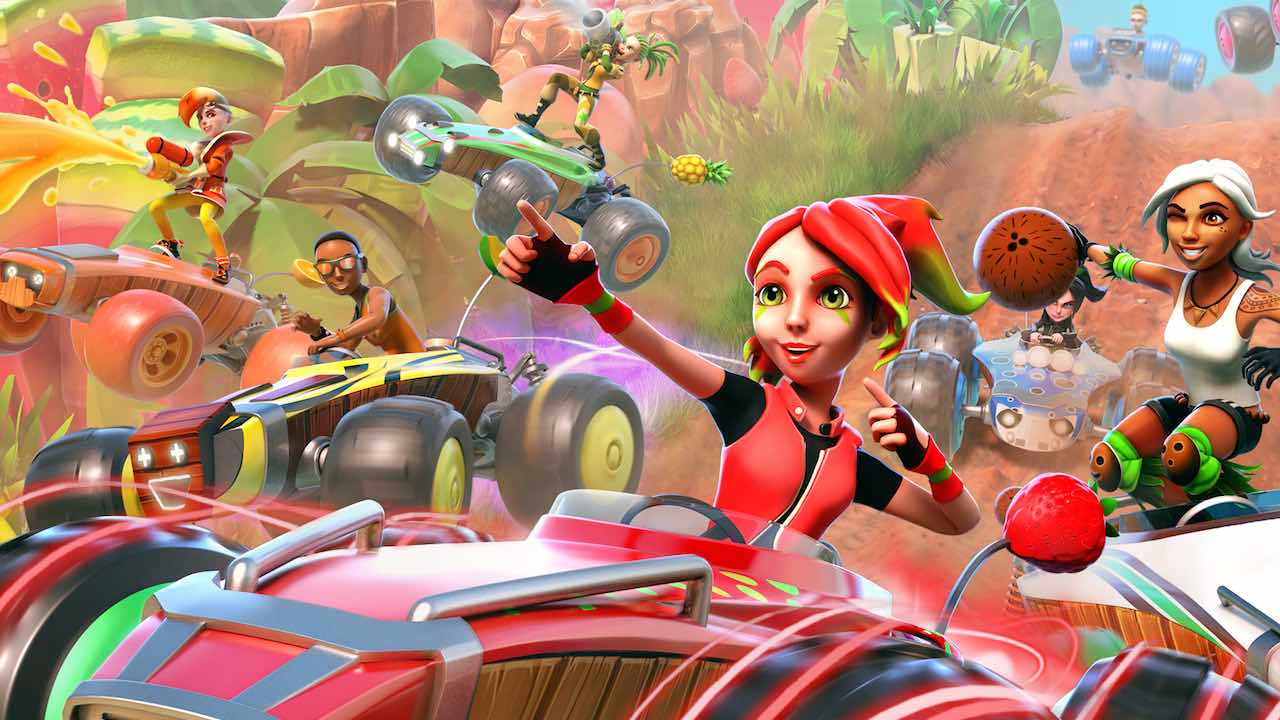 All-Star Fruit Racing hits consoles. How does it hold up? The FNGR GNS Review;

All-Star Fruit Racing hits consoles. How does it hold up? The FNGR GNS Review;

I do like a good kart racer. Granted, there aren’t as many around anymore as I would like, one particular franchise has taken over this particular genre and anything else that is released within it will doubtless be compared. And rightly so, you would think. Mario Kart is phenomenal, and any game that tries to copycat the pitch perfect competitiveness of the series will undoubtedly come up short. If you’re going to compete you’re going to have to do something different. People have a special place in their hearts for Sonic All Stars Racing Transformed (especially Paul and myself), and it’s obvious what that’s doing differently so what can anything else offer? Enter All-Star Fruit Racing.

All-Star Fruit Racing caught my attention because of its interesting art style and the hope that it may just do something a little unique with the genre. The obvious components of a kart racer are here; a lush, colourful world that looks great, ridiculous vehicles and characters little else. It’s exactly what it says on the tin and though the ‘All-Star’ portion of the title may be a little misleading (who exactly are all these people? Is it the fruit that’s the all stars?), there’s a decent roster of 22 characters that you’ll be racing around these tracks in no time at all. The game really tries to make them look all look slightly different but I’d be hasten to pick particular ones out of a line-up, considering how little background the game gives on them. They could have just included 22 boxes with a smiley face on them and they’d have about the same effect.

The racing itself is rather fast paced, and it’s not easy to get yourself a commanding lead unless you’ve managed to wrap your head around the item system, a mechanic that the game should be commended for. Instead of just driving through random item boxes you need to collect them until you get enough to actually use the item you’ve collected. Each item box has a colour and so if you want to use a particular item you’re going to have to rack up the item boxes before they can be utilised. It’s a cool idea and certainly makes the races a little more strategic. You’re also able to combine items to make something far more devastating. Combining the ingredients you collect will in turn make you that little more more threatening, so it’s always worth holding off until you can choose your pitch perfect moment to unleash whatever it is you’ve concocted.

The only problem with this that I found was that you can’t choose which direction they go, something that feels like it should be a standard feature of any kart racer. If you’re way ahead you’re going to want to shoot items backwards, and you just can’t unless they were always meant to go backwards in the first place. It means that you’ll be shooting a fair amount into nothing as your opponents creep up on you. Frustrating when you know you have the means to take them down.

Getting forward isn’t easy, though. The games AI is slick and knows these tracks far better than you do, hence they’re able to use shortcuts as a means to get around and easily overtake you, regardless of how far ahead you think you are. It’s always a good idea to keep having quick glances down on the map to see just how close everyone is because they don’t let up. I’m pretty sure every time I was hit by an item I was overtook by an AI. That’s fine, I get the rules, but when you’re almost certain you’ve got yourself a lead it can be stripped away from you in seconds.

Certainly it keeps you on your toes, and being at the front of any racing game is the most boring place to be, but in terms of having that first place feeling, it never really lasts for too long. You can still win races, and I beat every track for the purposes of this review but it certainly took longer than it maybe should have purely because the game doesn’t really give you much of a chance to breathe.

Shout out to the fruit knowledge All-Star drops on every loading screen. I now know more about stuff.

When you do win the tournaments though, not much happens. A few more tracks unlock and that’s about it. There’s not a huge amount of fanfare involved. It’s a small thing but after actually winning a tournament that I felt was a bit of a bloody hassle, it would have been cool to see that achievement recognised. Maybe that’s just me? I like it when games tell me how awesome I am.

The tracks, though, are great. Well designed to the point of near lunacy. The detail that surrounds you when tearing around a track is hugely impressive and reminds you of Sonic Transformed tracks, which can only be a positive. From ice-cold fruit tracks to the chocolate caves, tracks where you have to avoid enormous tomatoes that can easily knock you for six and the overall visual style makes Fruit Racing a heck of a treat for the eyes. The characters, well bland and forgettable, are designed to fit directly in the world and don’t look out of place (like, say, Bowser does in Baby Park). Across all the tracks the theme is consistent and is a credit to the designers and animators. There’s absolutely no denying Fruit Racing looks the part.

All-Star Fruit Racing isn’t going to change the world. It’s not going to blow your mind and it certainly isn’t going to win any awards come the end of the year. What is is, though, is a fun video game that you can play with your entire family and have a good time. In multiplayer modes, Fruit Racing comes alive and it’s hilarious playing with mates that think they’re going to win because they’re good at Mario Kart only to have their ass handed to them by the impressive item selection mechanics.

I knew what I was getting into and whilst it’s probably not going to be bothering Mario and Sonic atop the kart -racer leaderboards anytime soon, it’s fun, full of vibrancy and a great choice to crack out over the summer months.

All-Star Fruit Racing is released on July 13th on Xbox One, PS4 (reviewed on PS4 Pro) and Nintendo Switch. It’s out now on PC.

Disclaimer: In order to complete this review, we were provided with a review code from the publishers. For our full review policy, please go here.