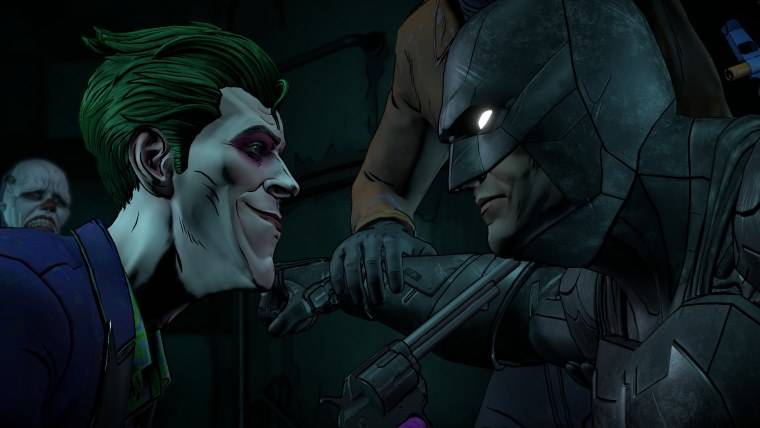 The fifth and final episode of Telltale’s Batman: The Enemy Within AKA Same Stitch secures the series as a triumph in narrative design and the greatest re-imagining of the Joker to date. The Finger Guns Review;

Like many others, I’ve considered season one of Telltale’s The Walking Dead to be the high bar for narrative based gaming since the series ended in November 2012. Other games have come close to matching the story design and writing strength of Lee and Clementine’s 5 episode journey – Tales From The Borderlands and The Wolf Among Us to name a few worthy contenders – but the inaugural season of the human focused zombie epic still stood tall, yet to be bested by its peers. That was until Batman: The Enemy Within. I’ve suggested a few times in my reviews of this series (Episode 1, Episode 2, Episode 3 and Episode 4) that Telltale were working on something pretty special with their new Dark Knight epic but it wasn’t until the story threads converged in episode five – the Same Stitch – that I felt confident enough to say this; it might not carry the emotional heft of The Walking Dead but Batman: The Enemy Within is Telltale’s best, most well written work to date.

The relationship between the Joker and Batman has almost always been a symbiotic one. Ever since the introduction of the Joker in the 1940’s, the pair have played off one another with a strange belonging like Strawberries and Cream. Fine separately but sublime together. As time has gone on, Batman and Joker have become obsessed with each other as they push each other to new extremes. It’s also true that the Joker’s origins have always been a mystery – whether it be The Killing Joke’s Red Hood, Jack Napier or a long-lived jester from a by-gone era, there’s never been a “true” origin to Joker. Telltale have used this pair of long standing Batman narrative aspects to craft a tale in which John Doe’s transformation into Joker ties it directly to the darkness within Bruce Wayne and Batman in a truly original way. This is represented in the fact that dependent on what choices you’ve made in episodes 1 to 4 of Batman: The Enemy Within will determine which of 2 unique versions of the Joker appear in this episode – a vigilante or a more traditional villain.

My own personal choices led me to the Vigilante Joker. This is, by far, the most original and, more importantly, most natural origin for the Joker I’ve seen to date. It’s such an inspired choice of Joker progression – a misguided, unstable individual obsessed with Batman who decides to emulate him but doesn’t see the line he mustn’t cross. It’s superb character progression which is inspired by the forced choices Bruce and Batman have had to make for/in regards to John Doe and the way that has shaped the would-be friend. The alternative, the Joker more aligned with how he is traditionally portrayed, is still a refreshing take on it too. There’s an air of resentment to the Joker with the sting of betrayal forcing him into a downward spiral that he’s not whole heartedly into. Regardless of which Joker you end up with, they’re both very human, very likable and the series of events that Same Stitch propels you through are compelling and feel like your own doing. Previous origin’s stories for the Joker have linked it to Batman but never before have they been so deep and ingrained into the make-up of characters themselves and the choices they’ve (sic. you’ve) made.

Both versions of the Joker are bought to life by another magnificent vocal performance by Anthony Ingruber. It’s in this episode that the shackles finally come off of John Doe and he finally gets to let the crazy out which Ingruber pours into every line he delivers with poise, confidence and even a little humour. I literally laughed out loud, as did everyone else in the room, when the Joker says “We’ve taking the Batmobile? We’re taking the Batmobile!” during this episode. It’s impeccable voice work that delivers the most menacing yet congenial “Joker laugh” I’ve ever heard too. Better than Jack Nicholson. Better than Jared Leto. Even better than Mark Hamill. I can’t imagine it was easy to deliver vocals for 2 separate versions of the Joker either but the young voice actor really nails it. Enn Reitel, who plays Alfred, also has some well written lines in this fifth and final episode, delivered with emotion and power. There’s an entire section of this episode in which I selected “…” to just let Alfred talk because there was no right answer to the quality of the delivery. Troy Baker is, of course, on top form with Bruce/Batman seemingly bringing out the best in him as he leads the line in a team full of world class voice actors.

As for the writing, every character, big and small, gets progression here and while you might not always see it coming, it always feels “right” for the character. Amanda Waller flits between best friend and worst enemy as you try to judge which side of the line she sits. Tiffany Fox comes into her own but has secrets that’ll change her relationship with Batman forever. Catwoman, Bane and Harley Quinn are back, making the most of their reduced screen time. Batman: The Enemy Within really is a character driven narrative and Telltale have managed to give each and every face that appears on screen a believable and engrossing story arc. Even the Agency grunts get a mini-arc. It’s a very well written and executed story. My one and only gripe with this tale is that there’s a massive decision that’s made towards the end of the game and we don’t get to see the consequences for it. It’s a powerful moment that’ll likely shape the future of any further Batman games from Telltale but having the decision here rather than at the beginning of the next season leaves it a little hollow. It’s an obvious hook to get us to come back for me (and if you’re reading this Telltale, yes please. Much more) and if you ask me again in a few years’ time and we’re playing Season 3 of Batman, I’ll likely tell you something different but I felt there needed to be a little more punch to the choice here and now rather than further down the line.

Technically, Batman: The Enemy Within Ep 5 is once again flawless. No frame rate issues. No slowdown. No missing textures. No black outlines. No crashes. Whatever it is that the engineers and coders at Telltale have done in the background, they’ve worked wonders and I think we can officially say that the technical hiccups that have plagued them in the past are well and truly behind them. THE QTE combat sections in Same Stitch are incredibly enjoyable because of this. You can really get into kicking the crap out of your foe because you’re not distracted by slow frame rates or stuttering.

Episode 5 of Batman: The Enemy Within is the cherry on top of an excellent season. While we’ve always been warned that “Our choices will effect game play” in Telltale games, never has this felt more true than in this episode in which your decisions truly shape not just what happens but what shape your antagonist comes in too. It’s a series that has kicked the status quo to the curb and has told original stories based on well-established characters, pumping much needed originality into Batman and his rogues gallery.

Everyone from the writers to the voice actors and everyone in between need a pat on the back for crafting a season which finally equals and often surpasses the story telling in Season 1 of The Walking Dead. We’ll never forget Lee and Clementine but what Telltale have done with Batman is nothing short of miraculous.

Episode 5 of Batman The Enemy Within – Same Stitch – is available now on PS4 (reviewed on base platform), Xbox One, PC, iOS and Android.

Disclaimer: In order to complete this review, we recieved a copy of the game from the publishers. For more information, please see our review policy.

Tags: Batman: The TellTale Series - The Enemy WIthin PS4

1 thought on “Batman: The TellTale Series – The Enemy Within Ep.5 – Same Stitch Review – No Joke”