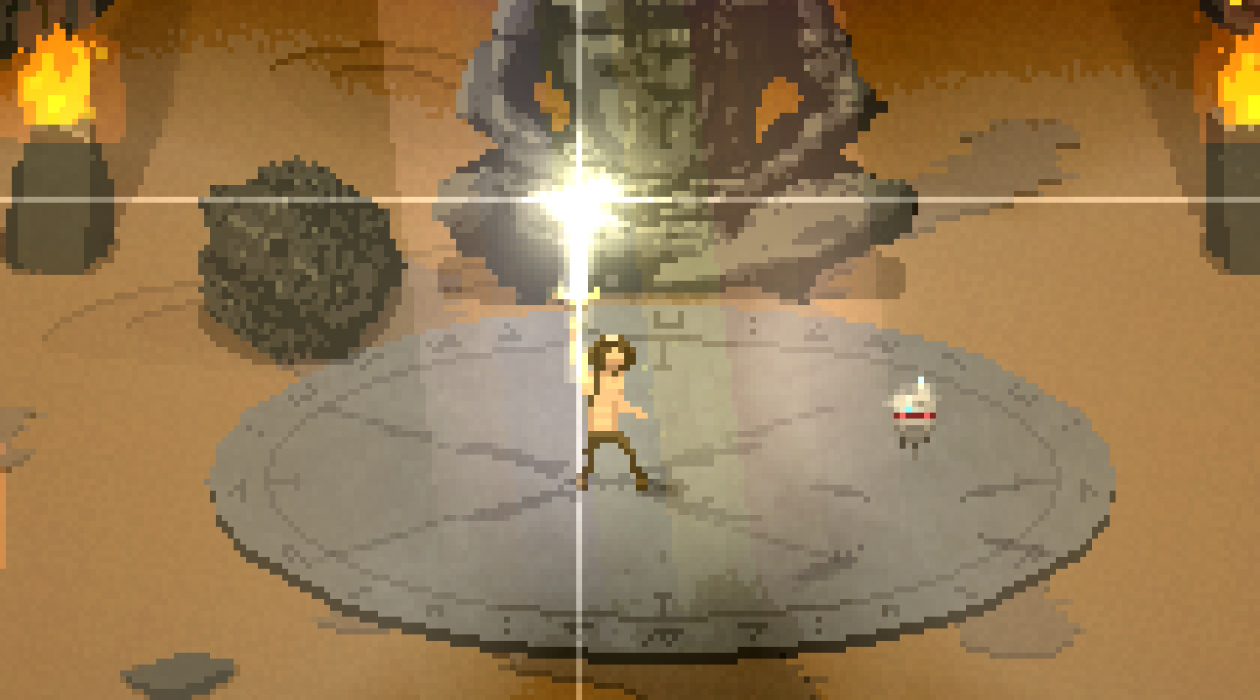 Songbringer arrives on PS4. Does it stack up against its competitors?

Songbringer is a super-tough, rewarding RPG that doesn’t quite give enough. The FingerGuns Review;

Songbringer is releasing in a week of 23 other games on PSN. The now absurd ‘end of August – early September’ slot for releases, seemingly to avoid the onslaught of big guns appearing one after the other, is now so overcrowded, you have to wonder if it’s not worth just waiting until January to drop your indies, giving your title some breathing space. Songbringer is one such game. Though it isn’t perfect, it’s worthy of your attention.

You play as Roq, a Rockstar who crashlands on a mysterious island with his handy robot companion Jib, only to happen upon a rather nifty sword in a cave, a sword that when wielded awakens an ancient evil that dwells beneath the surface. It’s here you begin your journey and from the off, you’re going to very quickly decide whether or not this game is for you. Songbringer is balls to the wall difficult. In the most respectful way, its pixellated aesthetic isn’t the only aspect of the game harking back to the more punishing eras of the early RPG genre. It’s relentless, the procedurally generated nature of it all means you’ll get to explore areas you’ve never found before over and over again, and so you never really get into a rhythm of moving through the areas with any real feeling of confidence in your skills. The game gives you an uncomfortable feeling that your ‘courage’ (Songbringer’s health) isn’t quite enough to get you through a variety of areas where everything wants to kill you dead and has the ability and the offensive to be up to the task with minimal effort.

The aforementioned aesthetic of the game is its biggest draw. The entire game world of Ekzera looks absolutely stunning, with beautifully rendered locations surrounding you at every location and the sheer variety of how the game changes depending on what is generated is a neat touch.  If you’re a fan of the pixelated visuals then you’re gonna have to see Songbringer beaming through your flat screen. It’s sumptuous and has led this writer to take a screenshot from the game and turn it into his laptop wallpaper. What this does is make you want to explore around the game, and have a nose at Wizard Fu’s – one man army Nathanael Weiss – creation. The use of light upon statues and water is particularly impressive, certainly in motion and deserves a look at the trailer above to see it in action. Particular areas do look similar but that’s hardly a complaint – at least there is something to look at and the encouragement of exploration is one of Songbringer’s strongest assets.

I must give a nod to the design of the enemies, particularly the bosses. With the retro aesthetic coupled with the power of a modern console, the bosses are intimidating and created beautifully, which is also annoying given how easy it is for them to kill you.

And kill you they will. There’s a metric tonne of different enemies you’ll encounter that have no issue with murdering you in cold blood for invading their world. From lizards that wield daggers, floaty orbs, porcupines with frickin’ laser beams attached to their heads, worms that appear out of the ground and tower over you, the list goes on. You don’t have an awful lot in your arsenal to take them down at first, so you’ll have to be tactical in order to work out the best way to bring them down. Your Nanosword – the one you ripped from its singular resting place, you idiot – is useful in one on one situations but if you get crowded it can feel clumsy and slow and you’ll immediately feel vulnerable when your sword isn’t hitting like you want it too. Considering the games narrative is more or less based around the power of this sword, it’s surprising the it isn’t all the powerful and as a standard weapon it’s a trifle substandard. Fortunately as the game progresses you’re able to acquire other weaponry such as lighters, bombs, a 007-esque top hat you can use as a boomerang and more. There’s also a variety of special abilities such as invincibility (though naturally this is temporary) and a boost to your courage – All handy in tricky situations but you’re almost always outgunned. In these situations Songbringer becomes more tactical than you would expect.

There are shops scattered around the island where you can buy supplies – which are an obvious nod to the iconic ones in classic Zelda titles – such as the very handy Bio Detector, which will allow you to locate life in new areas such as the dungeons, of which they are not particularly friendly. If you’re going to play any area in this game which may make you want to throw your TV out the window and scream to the heavens then the dungeons are going to do it. I died many, many times just trying slowly maneuver my way through to the final destination, where you discover a boss and die over and over again.

Really if you’re not used to this kind of gameplay, which will end you before you’ve even had a chance to compose some kind of idea of how you’re going to get out of your particular predicament, then you’re not going to get anything out of Songbringer. Even from the moment you find the sword you’re confronted with an enemy, and with no tutorial you’re immediately going to die and there’s little you can do about it. The buttons are all mapped out at the bottom of the screen in a line, so at least you know which button to press to swing your sword but that’s about it. You’re left to fend for yourself and if a game which has no interest in not easing you in doesn’t appeal, you’re going to have to stay away. It’s not going to hold your hand.

So, as mentioned above, Songbringer is going to appeal to you if you like a serious challenge. If you think yourself good at these kind of games, you can probably get through it in less than 10 hours, dependent on how thorough you’re going to be. Jib, your robot pal is handy in these situations as he can scout for money and courage (and can also be controller by a second local player for co-op modes). I took much longer than that, but it’s only because I suck. There are leaderboards you can challenge players on, and as the game gets into the hands of more people I’m certain I’ll see my times and full completion rate tumble and probably disappear off the board altogether. And it has a Platinum with a Trophy list that makes me wince (complete the game in 2.5 hours? Shudder). Oh, and it has a Permadeath option so if you’re into punishing yourself you know where to look.

Songbringer is good. Its visuals are the strongest asset of the game and I have to commend its one man development team for making the game look as glorious as it does which made me want to explore and discover new areas. I realised in that moment that whilst I had fun and felt a genuine sense of reward, I’m not sure if I enjoyed it as much as I was hoping I would.

Though it if sounds up your alley, you could do far worse.

Songbringer is available on Xbox One, Steam and Windows on September 1st. It will arrive in PS4 (reviewed) on September 5th.

Disclaimer: In order to complete this review, we were provided with a review code from the publisher. For our full review policy please go here.