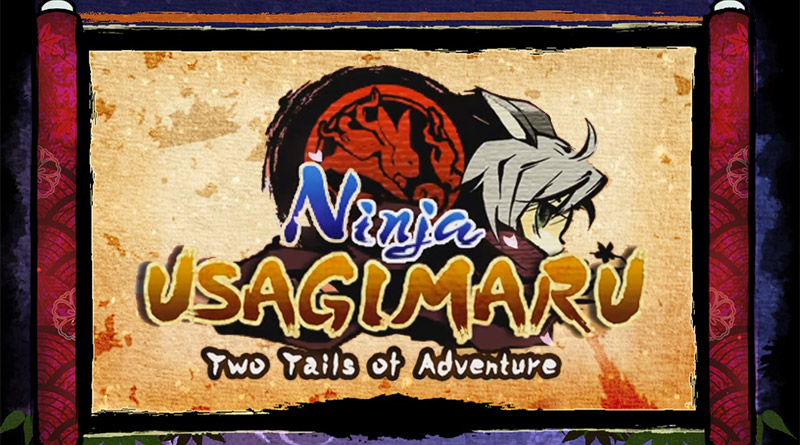 Both Ninja Usagimaru games come to the PSVita in the double feature “Two Tails of Adventure”. The FingerGuns Review;

Both Ninja Usagimaru games come to the PSVita in the double feature “Two Tails of Adventure”. The FingerGuns Review;

The Ninja Usagimaru games are a pair of puzzle adventures that were previously only available on the 3DS in the West. Thanks to Arc System Works, FK Digital and localisation specialists Aksys Games, the 2 games have been combined into one package for the PSVita called Two Tails of Adventure. The Gem of Blessings and the sequel The Mysterious Karakuri Castle both revolve around the adventures of a legendary warrior called Usagimaru who is tasked by the rabbit gods to rescue villagers who have been kidnapped by the “fearsome Mononoke”. The plot is about as basic as you can get, told through text and static images periodically, and only serves as a window dressing to the games real content…

The puzzles. Each of the 2 games consists of a short tutorial and 60 head scratching main puzzles as well as a few bonus unlockables for good measure. Each puzzle is played out on a single screen with the same set of goals – squash a Mononoke with a stone which will release a captured villager, free the captured villager from their binds and then escort the villager to the “Rabbit Stone” exit.

Each of the games 120 levels in Two Tails of Adventure are designed around the abilities and constraints of Usagimaru. He can jump, but only if there’s enough headspace. Alternatively, he can crouch and jump, but he travels a shorter distance. He can carry blocks but only above his head, limiting his jump potential even further. He can throw blocks but only to the left, right or one block above in either direction. He can destroy broken bricks with his Kunai but he has to be standing next to it. He can chain onto certain blocks with his chain and pull them towards him, but only within the 7 squares to the left and right of him. He can fly with his Kite, but only in up-draft streams. It’s a game designed around the multitude of abilities Usagimaru has but drives you to find the one solution to each puzzle by limiting these abilities.

Ninja Usagimaru: Two Tails of Adventure is predominantly a test of trial and error. As much as you might like to try and plan out how you’re going to solve a puzzle up front, this game specialises in making you regret the way you think you can solve a puzzle. An example – Some of the puzzles look really simple. They give you access to blocks which look like they should definitely be in a certain place and it’s only a few minutes later, after you’ve squashed the Mononoke, freed the villager and are attempting to reach the exit do you realise “Oh nuts. I shouldn’t have moved that first block because now I can’t reach the exit”. Hit restart. Rinse and repeat.

That’s the main draw back with Ninja Usagimaru – it’s very easy to make a large number of the puzzles impossible to solve. Press the wrong button and throw a block instead of placing it down and you’ll have to restart the puzzle. There’s no way to rewind your last move. Alternatively, you can put down a Pinwheel which will return you to the point at which you put it down – but this only feels necessary when you know something tricky is coming up next and becomes a little redundant. I mean, if you knew you were going to make the puzzle unsolvable before you do it, you just wouldn’t do it, would you? Putting down Pinwheels ever 10 seconds or so, just incase you press the wrong button is a little frustrating. The mind boggling levels and mind boggling enough without this added level of annoyance. What’s even more vexing is that the game doesn’t tell you when you’ve made a puzzle unsolvable. You can continue to play for a few more minutes, trying to solve something that’s now impossible before you realise your mistake and have to restart.

The other annoying aspect is the villagers. Escort missions in any game are never very popular and here, they’re a part and parcel of the game experience in every level. Once you’ve cut the binds around a villager, they’ll follow you wherever you go but have an infuriating tendency to kill themselves. Jump across a pit of spikes and 50% of the time, the villager will just walk into the spikes, forcing a restart. You have to be extra specially careful when you’re heading to the exit and even when you are, the villagers still manage to shift themselves off the mortal coil by doing something daft. There’s no rhyme or reason to it either. Perform the exact same jump twice and the villager will fail it at least once.

Visually, Two Tails of Adventure doesn’t have a lot going on. The 120 puzzles are broken down into sets of 10, each with their own theme. This “theme” only changes the background static image which remains the same throughout the 10 levels it represents. I have to admit, the backdrops are lovely but are often obscured by the blocks and action going on in the foreground.

If you’re looking for a perplexing puzzle game that’ll fill a bus journey with some head scratching enigmas, Ninja Usagimaru: Two Tails of Adventure might be the game for you – but approach with caution. Each level can take between a minute and half an hour to figure out and there’s a healthy 16-20 hours worth of content in this game. It’s often frustrating, infuriating even, and may make you feel like a total idiot during some of the difficulty spikes, but a third of the puzzles are pleasing to solve and it has a charming soundtrack.

Disclaimer: In order to complete this review, we purchased a copy of the game. If you’d like to know more about how we review and score games, please see our review policy.