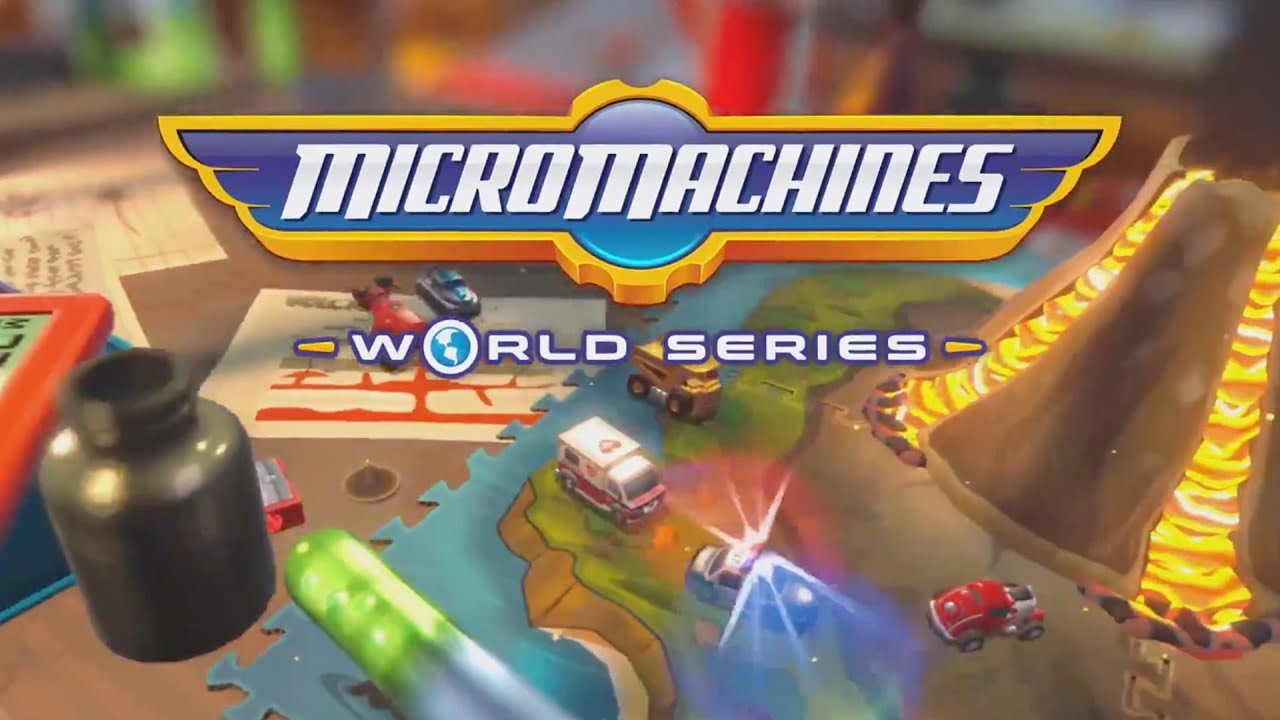 Micro Machines World Series is a soulless re-enactment of a once beloved racing series. The FingerGuns review;

Well there you go, it would seem Hasbro loves to give up its licenses to the highest bidder only for them to go out and die on their ass. We’re still here for you Optimus, even if nobody else is.

I don’t think I know anyone that hasn’t played Micro Machines. I mean, my grandparents probably never played it, but within the industry and my gaming friends, at some point or another we’ve all been blessed with tearing it around tables in search of that elusive finish line.

When Micro Machines World Series was announced, no doubt it was an exciting announcement for those who have awaited a new game in the series, especially on our shiny new consoles. It’s a shame then that the game is a complete jumbled mess of what we loved from the classic originals and what Codemasters seems to think we want from it. None of which is does particularly well.

From the get go it’s pretty obvious that this is a cheap cash-in. If you’re going into the game expecting tiny versions of life-size tanks, ambulances and the like, you’re in luck. Just be ready for it to be branded with Nerf logos absolutely everywhere. In-game branding isn’t anything new but here it’s just a little vile in just how excessive it is. It’s on the UI, it’s on logos in the tracks and on weapons are branded Nerf guns.

It’s a shame that I’m talking about three particular brands so prominent in my childhood this negatively, but Micro Machines World Series is about as enjoyable as watching Michael Bay Transformers movies whilst being shot in the head with a Nerf gun.

The joy of Micro Machines stems of course from the all time classic Mega Drive title, which I’m damn near sure everyone who had a vested interest in World Series would have played at least once in their lives. Being able to tear it around pool tables, back gardens, kitchen tables was a great novelty and now it’s back, World Series just doesn’t have that same feeling. The fact the game is more or less just an online multiplayer experience is probably the reason for this. Yes, there is single player modes but you don’t get a championship or any kind of tournament. You get a single race and a free for all battle mode, that’s pretty much it bar the classic Elimination mode, which makes its return here and fortunately is still pretty fun, ensuring World Series isn’t a total disaster.

Talking of Battle mode, I’m not entirely sure what it’s doing here. In specifically designed arenas players will battle it out with vehicles that have weapons specific to them. Three powers are instantly available but include that joyous addition known as recharge, so you can only use them sparingly and when the game decides you’re allowed to. You also have an ultimate attack which can cause some major devastation, and more or less guarantees an insta-kill. You’re gonna be lucky if you end up using it more than once per game, though, if at all. You’re going to be waiting to respawn pretty regularly, which is kinda frustrating. The games are hectic and you’re learning a bunch of new mechanics as quick as you can, which means you’re going to die a lot. Strangely, this seems to be the mode the game is pushing on you more than any other, even over the races which is odd, because well, this is Micro Machines. I haven’t come here to play online battle modes. I’m here to race.

As I mentioned above World Series is primarily an online experience, and as a whole it works pretty well. I haven’t had any lag or been waiting on a match for too long. If it does tend to stretch the game will throw in some AI bots to fill the spaces which are direct from the classic games, such as Cherry, Spider and the like.

Sure, perhaps you aren’t playing World Series for its single player Championships and know that the joy of Micro Machines is normally in its multiplayer, but here it’s the elephant in the room. I certainly would have enjoyed honing my skills in single player tournaments before taking the races online. As mentioned, there are single player options, but they’re hardly worth a mention, such is their lack of depth. If you’re not much of an online player there’s little for you here. The local games are placed under Skirmish mode, almost trying to be hidden at the end of the first menu.

Oh that menu, when you start it looks something like this. I know, calm yourself, the excitement is overwhelming you.

The first menu you see. How exciting is THIS?

Still, Skirmish mode is where you’re going to probably be spending most of your time playing with your mates locally, which is really where the fun of World Series lies, ironically. Just skip Free-For-All, it offers you very little in the way of…what do they call it? Oh yes, fun. Gentle reminder that you also can’t race locally either. That’s right, you heard me. In Skirmish, Race is single player only. Single. Player. Only.

Remember that in Micro Machines? Pepperidge Farm remembers. As I said above, Elimination mode saves World Series from being a truly awful experience, but only just and even then it feels like an afterthought. Like it was added only to pull at nostalgia strings when everything else is moving in a completely different direction.

And then there’s the tracks, of which you have ten. Some are imaginative, others are frustrating as all hell. With the difficulty in even controlling the micro machines themselves is here present and correct, the layouts of the tracks that include corners seemingly appearing from nowhere, pits that you will fall into and table edges you’ll probably fall off, it’s just a shame their layouts weren’t thought through a little more, given the nature of handling these floaty vehicles which have very little in the way of handling in the first place. You can tear it off the side of a track quite easily and you’re not entirely sure how you’ve done it. There’s a location atop a Hungry Hungry Hippos board which is just about ok. Another childhood brand being shoe-horned in to kick up a fanboy nostalgia storm.

One of the biggest draws of Micro Machines is to see the detail of the surrounding tracks, and what they’ve added to these real life locations to give the arenas and tracks a level of authenticity and to its credit, each track is cosmetically impressive, the ‘Arenas’ can be muddling and frustrating. Whether it be a map which is next to useless as your eyes have to be on the track at all times, lest you fall into a pit, through ice or off the track altogether. I never really felt like I had full control and in a game which relies so heavily on precision timing that was to its detriment. You’ll slide across the track with little effort, you’re going to be tearing off the tracks pretty easily.

Micro Machines World Series is a budget title, coming in at £20 retail, £25 digitally. At this price, it’s still a tad difficult to recommend, purely because everything on offer is so poorly executed. The online portion of game, whilst it works well enough with no real issue in getting matches, at least for now, doesn’t justify its price and the single player experience is just a punch in the face to fans of the classic games. The fact that you can’t just set up some controllers and have a race with your mates around the same screen is an absolute travesty, and it’s beyond me how that feature is not included in a sodding Micro Machines game. Your only hope of having any kind of real fun in World Series is Elimination Mode, but it’s not worth £20 and certainly not worth £25. Oh, and there’s no boat level. Come on, guys.

The only way you’re going to get anything out of this turgid experience is if you’re the CEO of Nerf.

Micro Machines World Series is available now on PC, Xbox One and PS4 (reviewed) for £19.99 – but use that to get Crash Bandicoot N.Sane Trilogy

Disclaimer: In order to complete this review, we purchased a copy of the game. We know, we can’t believe it either.