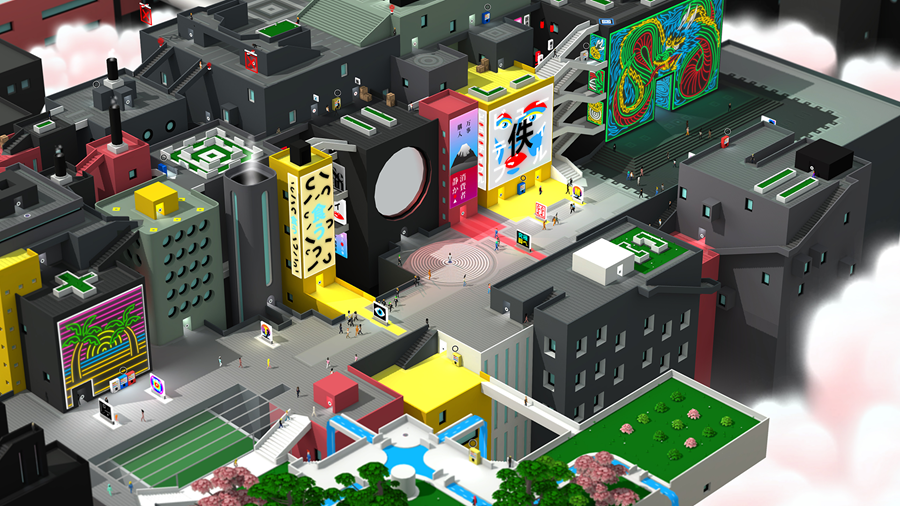 I’m just gonna throw this out right at the top, and this is something I’ve mulled over for a couple days but now I know this to be true: Tokyo 42 is one my game of the year contenders, and the best game I’ve played on PC for a long, long time.

It wasn’t easy to come to this decision. Do I play a lot of PC games? Not particularly unless they really catch my interest, which Tokyo 42 inevitably did. I’ve been excited to play ever since Sean waxed lyrical about the game to me a while back, so I dusted off my Steam account and got to it. I haven’t looked back.

And yes, I’m aware Tokyo 42 is also available on Xbox One (and coming to PS4 soon), so it’s not an exclusive PC game but for the purposes of this review I played it on PC and I was flabbergasted at how much I enjoyed it. Not since – literally – Bullfrog’s 1993 classic Syndicate have I enjoyed a game sat in front of a monitor as much this one (though saying that, I did play the game through Big Picture Mode on my TV. I hope there are no unwritten rules against that?).

Ironic as well, as Syndicate is a game Tokyo 42 developer SMAC has described the game. Maybe it’s the genre? Chaos Engine was wicked, too. But I digress..

SMAC Games have created a game that’s probably worth investing in a hefty PC to truly witness at its finest available quality. This hyper stylised, cubist and colourful world deserves a crisp screen to admire, a vision of Tokyo that wouldn’t look too far out of a Blade Runner movie, beautifully presented in a living breathing world with a ton of NPC’s you’re doing your best not to kill to death.

You play as a character that been framed for the ‘first murder of 2042’, on the run from those ready to take you down. To clear your name and proclaim your innocence you, er, go on a killing spree as ordered by those who have seemingly appeared to protect you. You’re tasked with doing pretty much exactly as they say as you learn to navigate your way around these bustling cities, and learning the controls of Tokyo 42 at the same time, which at moments can be fiddly and a tad frustrating – I played with both keyboard and controller and both times I struggled with the controls early on.

The ‘contracts’ you receive at times can be straightforward or somewhat tricky. There are the basic ‘shoot a guy with a sniper on the roof’ which with the line of sight you’re given isn’t too much of a hassle. There are kills which will test your skills with grenades and others which require you to sneak around buildings full of armed guards without being caught. One early mission had me tear up a building with nothing but a katana, taking out each guard as I moved my way closer to my final target. At this point I hadn’t used any melee weapons and kept my fair distance, here I was getting up close and personal with my blade. It’s here the games USP comes into play: The camera.

You have yourself a camera which you swing around the levels but only at a quarter at a time, so if you’re stuck in a jam and push the camera the wrong way round it be a huge hindrance in the more action packed moments. There was also the smallest of delays, but that delay did get me killed. Being able to see this beautiful world from all angles is a delight and flipping the camera around at certain points allows you to see new vantage points, a different way to get to another side of a building or sometimes even ammo awaiting you. I remember this technique being used to great effect in games like Fez and here it’s no different, you just kind of wish it was just that bit snappier. I mean, we’re talking nano-seconds quicker, and perhaps it was my own fault at certain moments and I shouldn’t be blaming, but I certainly couldn’t judge a distance due to the ever-s0-slightly-slower-than-I-want-it-to-be camera movement. Does it make the isometric perspective as a whole counter-productive? Not at all. Moving through Tokyo is easy enough whilst walking (you can also sprint which it what you’ll probably spend most of your time doing), though riding motorbikes etc can be a little laborious as you’re persistently moving the camera around to perfectly take corners. It doesn’t get in the way, but it’s worth mentioning. I understand how this may be a pain in the ass for certain players.

Getting the camera in the wrong place in moments of action is something to consider here. There are times where if you cause enough carnage the police will descend upon you like the heavens just opened at Glastonbury. An army of police officers appear immediately shooting and with the one-shot-kill aesthetic, you’re gonna wanna move your ass and do your best to avoid this happening. You instantly respawn but then so does everyone that you’ve killed, so you’re made to replay sections over and over until you finally survive it. Fortunately you have yourself a cracker of a stealth technique to get yourself out of situations pretty quickly.

Tokyo 42 allows you to take on a different disguise almost instantly, allowing you to get out of very dicey situations with little fuss. So long as you’re hidden and can’t be seen by the enemy, they will leave you alone and spend the next few moments looking for you so long as you’ve used your disguise in an area where they can’t see you. I can’t tell you the amount of times this has saved my ass. At first you only have two disguise uses at a time but these can be quickly replenished with electrical stations scattered across each map. This is an almost essential ability and one you’ll be taking advantage of an awful lot if you want to stay alive. In one particular instance I found myself cornered by a bunch of gangster goons who had my number, I quite literally jumped off the building I was on in a wonderfully floaty action movie kind of way, landed (you’ll survive every jump so long as you have something to land on), ran to a small building, got to a side where I was hiding, hit the disguise, walked out and the enemies were none the wiser and I sneaked off without them noticing. In dire moments it can save your skin so don’t forget it’s there. Like, er, I did several times early on. The whole ‘oh shit, I’ve got that haven’t I’ crossed my mind enough times that I felt like an idiot for not utilising it earlier.

So why pre tel do I class Tokyo 42 as one of my favourite games of the year? It’s because of moments like that I just mentioned which makes it so damn fun. If you forget the somewhat awkward camera and the rather cheesy dialogue (it’s trying a little too hard to be funny, even though it’s chuckle-worthy/groan-inducing at times), it’s an action game built around just how stealth you can be. The camera is central to the gameplay so once you find yourself a rhythm there’s a chance you’ll get on with the game a whole lot easier. As you progress through the game, earning more money from your contracts and allowing you to purchase better weapons and gadgets, the freedom Tokyo 42 offers you is one of its strongest assets. You can go in all guns blazing or you can go in stealth, it’s up to you unless it specifies a certain way in the contract description. You’re kept a fair distance from most of your targets but the melee kills are the most fun, as you’re navigating your way through the beautiful metropolis without anyone seeing you. You can crouch and move slowly and use the camera to your benefit, allowing you to see exactly who is around every corner.

The game is also brilliant at pointing out exactly who it is you’re aiming for so you’re not so concerned about who you’re after, rather than how you’re going to get up there. The first few missions introduce you to the mechanics and that benefits of each weapon, it’s a fantastic tutorial and as you progress and given more freedom to explore how to get to these targets you’re going to find yourself trying out a variety of different weapons and techniques to get your kill and get back to your safe house before you cause too much of a hellstorm. It’s breathless and so much fun. You’ll die a hell of a lot but the reward of finally beating an area you were repeatedly struck down in makes you feel like you’ve genuinely accomplished something, and that’s a great feeling.

Of course Tokyo 42’s biggest selling point is its visuals. It’s one of the best designed games of the year in both a gameplay and visual aesthetic, and the sprawling streets of Tokyo have never looked so vibrant. The neon lights surrounding some absolutely stunning architecture bring to life a world that you have a ton of fun exploring just to have a look around. I don’t think I’ve ever taken so many screenshots with the only real use for them being my next laptop wallpaper.

Despite its niggles, Tokyo 42 is quite simply absolutely fantastic.  I cannot wait to see what SMAC Games have for us next.

Available now on Steam (reviewed) and Xbox One. The game is due for release ‘mid July’ on PS4. For more infomation on how we review and score games, please see our review policy.