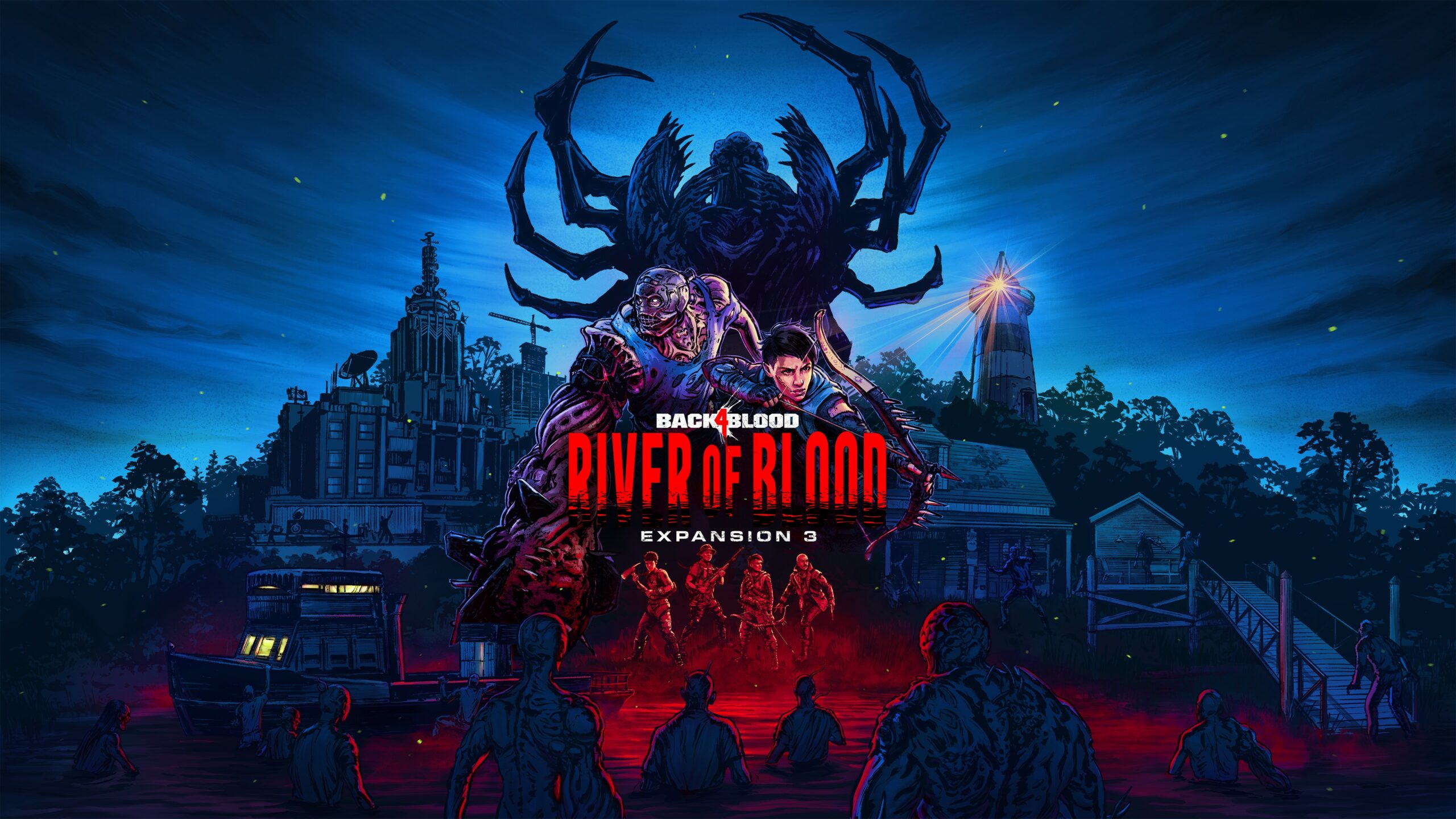 If you’re someone who’s so far followed all of the FG escapades into Back 4 Blood, firstly I want to say thank you and secondly, has it been in any way enjoyable? It’s been a corpse-ridden (pun intended) bumpy ride to say the least.

Expansion 1: Tunnels of Terror was utterly lacklustre while Expansion 2: Children of the Worm was a step in the right direction, yet still underwhelming.

Expansion 3: Rivers of Blood arrives over a year after launch and I can finally (gladly!), report that Turtle Rock Studios have cracked the dormant potential of Back 4 Blood. They’ve taken a lot of time and practice, but Rivers of Blood belatedly delivers some desperately needed creativity and variety the vanilla version was crying out for.

Launching with a new campaign act of 5 new missions, a unique enemy variety in The Sentinel, a new cleaner in Tara, a wealth of new cosmetic outfits and weapon skins, it delivers a hearty set of novel content to blast and smash your way through. As an added bonus, Turtle Rock have released a new PvE mode titled Trials of the Worm as a free update for all players, just to sweeten the deal.

Let’s talk Act 6 – the latest 5-mission romp added with this expansion. Rossko joined me once again for more Ridden slaying action and destruction, with both of us concluding the hour-long campaign feeling satisfied and remarkably impressed.

The cleaners are tasked with finishing off the last of the Worm cult/mutation… thing, going on. Over the 5 levels you head upstream on a ship complete with mounted minigun. In one standout mission, you savagely decimate hordes of Ridden while taking in the sights of a science museum, filled with dinosaur exhibits and a superb space set-piece. What’s cooler than mashing dozens of mutated heads next to a giant T-Rex?! The locations are much more vibrant and visually appealing, which does wonders for wanting to progress through the levels.

Objectives and tasks are the same as we’ve come to expect – defend yourself for x amount of time, set 3 bombs while not getting savaged etc. While the mission setups are standard, the locations, environments and level designs feel like a big step up. We revelled in setting masses of the zombified creatures alight while holding our ground for a dam to lower. Good times. Genuinely, really good times.

It culminates in a mission-long final confrontation with a boss inside a giant football arena, involving missile launchers, fending off hordes and a final desperate dash to escape. It nails that old-school Left 4 Dead feeling of chaos while having a bit more of its own personality etched in. Basically, it’s everything we’ve wanted Back 4 Blood to be from when it was first conceived. Nothing is wholly groundbreaking, but it comes together much more rewardingly than previous acts.

Rossko was a big fan of the new cleaner: Tara. Equipped with a bow that has unlimited ammunition, he was popping skulls with gleeful sadistic pleasure. Her ability also allows her to summon Jeff, a friendly Tallboy that will rampage into the hordes instead of your frail human skeleton. You can find whistles to summon Jeff throughout every level and it’s as stupidly fun as you can imagine.

The Sentinel is the newly introduced Ridden archetype and it’s an interesting addition. Able to burrow underground and sporting a horrifically fleshy and centipede-esque visual design, it can spew organic bombs that will act both as mines and projectiles. It can track you much more effectively than other types and its ability to burrow and move quickly makes it a formidable foe in large group engagements. A good addition, much to our despair.

In fact, the most rewarding improvement with Back 4 Blood as it exists now is the sheer amount of variety on offer. Seeing all the new Ridden specials, including the hulking beasts and arrow-firing Crones from expansion 2, intermingling and coming at you from all directions means there’s now a palpable sense of panic from juggling so many types of threats. It helps that additions like legendary weapons, attachments and equippables like the flamethrower are more readily available.

Seriously, spewing fire and watching dozens of Ridden disintegrate is awesome. It’s the most fun Back 4 Blood has felt, mainly because there’s more on offer to actually enjoy.

No Longer Ridden With Holes

Lastly, the Trials of the Worm mode rounds out the package with a generous free addition for all players. A randomised PvE mode, it finally allows the audience to skip all the guff of story and jump into the best part of Back 4 Blood – shooting lots, and lots, and lots of Ridden with not a care in the world.

Each run in this mode involves increasing 4 modifiers like difficulty, enemy types, debuffs to cleaners and so on. The more modifiers you increase, the higher your score multiplier and the harder the missions become. You’ll complete a set of 4 missions, where for each you select 1 from 3 random levels which will have randomised card modifiers.

Between each mission, you can choose to increase (but not decrease) your modifiers further, allowing you to find a sweet spot of difficulty that suits your squad, while allowing hardcore players to test their skills to the limit. It’s exactly the kind of mode Back 4 Blood has been crying out for and it offers a fantastic replayability element to what was otherwise a stagnant set of modes.

Overall, it feels like Turtle Rock Studios have really cracked what works for Back 4 Blood with Rivers of Blood. The game now feels much more feature and content complete, which seemed a pipe dream this time last year. Myself and Rossko genuinely remarked at how much fun we had trying out everything new in here and that’s without going into all the new cosmetic and card options. Rossko was a little too obsessed with my Doc skin, it must be said.

Well done to the developers. They’ve stuck with their flawed initial release and made Back 4 Blood a more riveting, chaotic and complete shooter. For the first time, I can earnestly say I’m looking forward to the future of the game, even if it still has some of those original flaws and gameplay design repetition.

Back 4 Blood Expansion 3: Rivers of Blood finally delivers some of the potential we’ve been waiting on. A much more appealing act of missions, wonderfully integrated new mode and some engaging new content means Turtle Rock Studios are, at long last, confidently realising Back 4 Blood’s ambition. Here’s to more Ridden-slaying in future.