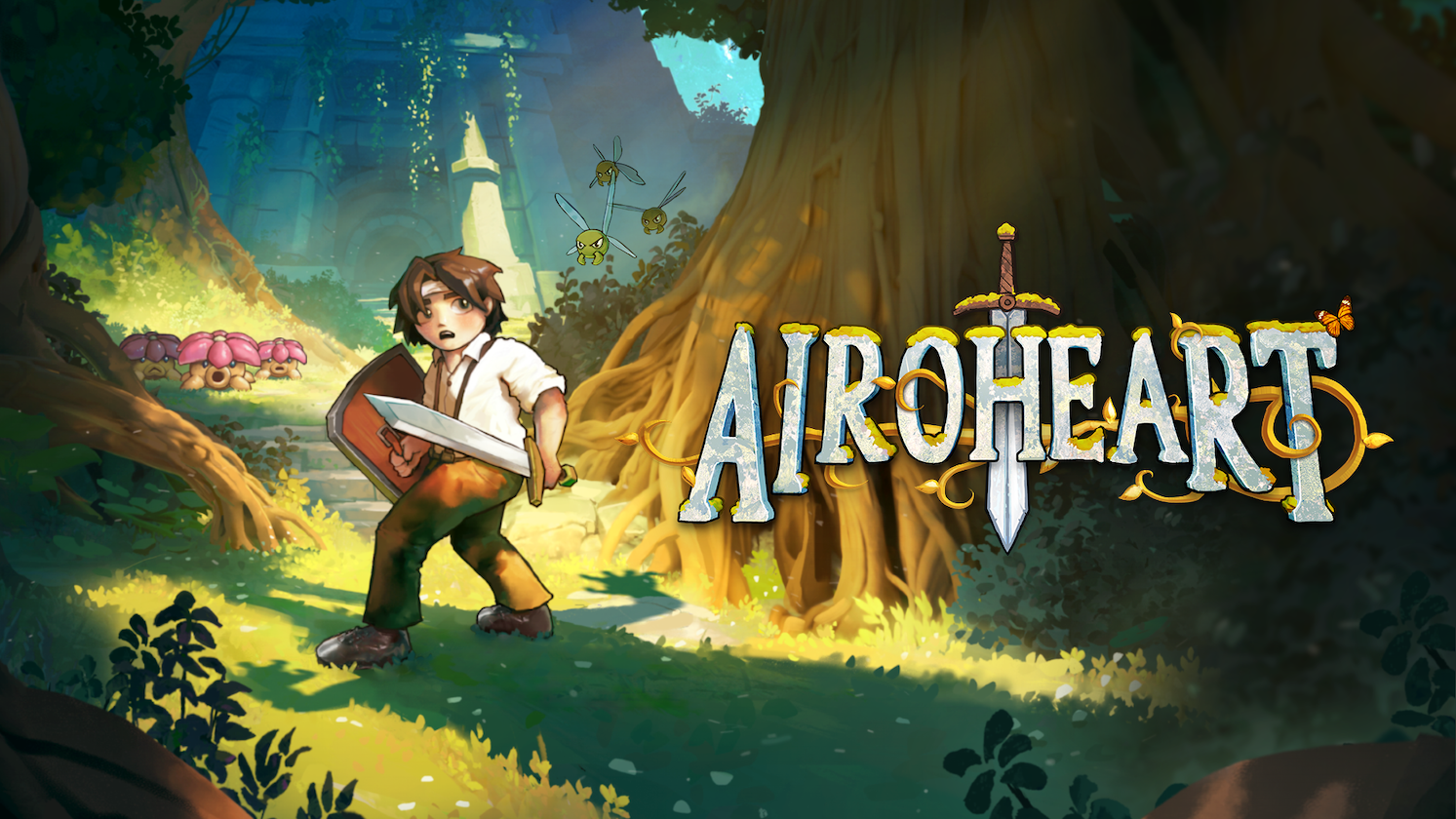 A love letter to the SNES classics – Airoheart releases on all platforms, but is there too many links to the past? The Finger Guns review:

Pixel Heart Studio are a one-person developer out of Gold Coast, Australia. Samuel North started working on Airoheart in his last months of studying Game Development. After a few years of development, a Kickstarter was launched for Airoheart and nearly doubled in its goal. Following a publishing deal this year with SOEDESCO, it’s finally released.

With a huge emphasis on inspirations from games like Final Fantasy and Zelda: A Link to the Past, North stated that he wanted to recreate the 16-Bit Games from the 90’s – though this may have been to a fault. A sprawling overworld, plenty of dungeons to plunder and secrets to find; on the surface Airoheart looks like it would go toe-to-toe with the likes of Tunic or Death’s Door, but let’s get into it.

The land of Engard is met with conflict between the Elmer and Bretons. The native Elmer’s believed in the peaceful kinds of Magic, whereas the Bretons believed in the destructive forms. One Breton in particular named Carthicus used this destructive Magic to attack the Elmeri lands. With the power of an ancient Relic – the Draoidh Stone – and a Sword, Carthicus was defeated and his soul trapped within the Stone by the Elmer. Fragments of the Draoidh Stone are now scattered across Engard, ensuring that Carthicus may never return.

You play as the titular Airoheart who lives amongst the Elmers, his story begins when the Breton break the peace treaty and move closer into Elmer’s territory. His long-lost brother Xanatos is searching for the pieces of the Draoidh Stone to bring back Carthicus and seek vengeance on the Elmer who killed their parents. It’s up to Airoheart to find the fragments first and save Engard.

Political strife, Magic, a party of heroes; it’s hard not to see the similarities of Final Fantasy. I’m happy that a game like Airoheart is more than just “save the princess” and instead has a more epic tale to experience. It’s nothing ground breaking and plays exactly as you’d expect if you’ve played anything similar. Although the formula of the plot is generic, it’s executed well enough that it doesn’t hinder the enjoyment of the game.

I Told You Not To Leave The House!

A standout would be the NPC’s across Engard. There are so many to encounter that are witty, full of world building and all distinctive, making Engard a fully realised fantasy land; with a hint of Aussie influence. It shows the unique charm of Pixel Heart Studio and it’s hard not to find it endearing when you’re walking into Llanfair’s local The Wobbly Boot.

There’s a lot of conversations to be had that someone like me would often forget. However, there’s a great Journal system that writes down key moments. Side quests have a character’s head in the page with a tick if it’s completed, and the main story jotted down all from Airoheart’s perspective. It’s a nice touch ensuring it doesn’t feel overbearing and has really helped me navigate my journey without a constant waypoint.

The gameplay has kept me torn on how I feel about it. Airoheart in a lot of aspects has gone beyond drawing inspiration and has instead hard copied Zelda: A Link to the Past. Now, I’m someone who’s not actually played it but it’s a big enough title to afford me comparable knowledge of the game on how it looks and plays. There’s nothing about the game that’s not touched by Zelda. Dungeons, level design, combat, throwing pots, the sounds! The first hours felt rough, it was hard to get into knowing how similar the two games were.

Unlike Zelda: ALTTP, Airoheart has a linear progression. Early on proved frustrating as you’re plopped into the world and outside of the first dungeon you’re left to your own devices. Of course, the last place I looked would be where I can go further into the game. But for hours I was speaking to everybody not getting anywhere outside of piling on side quests as it was too early on to complete. The influence of SNES classics takes it too literally when it comes to the Map.

After hours I started to get a hang of navigating, but that was only after knowing the layout of the Overworld more off by heart than reading the map. It’s inexcusably obtuse for a game in 2022, it only shows you a radius around you when you open it, you can’t move it. It’s hard to read with a glaring head of Airoheart taking up too much room of the map. After all that, despite my gripes with the map I wish I had it for the dungeons at least. In the later stages of the game dungeons became so hard to navigate effectively.

Bah! Only A Flesh Wound!

Airoheart’s combat abilities are limited to a forward swing of a sword, shield for deflection and a crossbow for ranged. I wish there was more to it, only the one move with the sword and a shield that struggles in its defence made me opt for the dodge roll as an alternative. It’s one note, dated and only feels playable once you’ve learnt the archaic ways of fighting.

The Rune system broke up the banality of the combat by providing a variety of ways of solving puzzles. From the Rune of Lethargy which slows down time, to the Rune of Creation creating an ice block, each provided interesting ways to tackle the world’s mysteries and every ability gained had me doing a once over across Engard to see what secrets I could find with them. However, the later dungeons require use of multiple runes and the only way to equip one at a time is to go into your backpack and equip, breaking up the flow of gameplay.

The sense of exploration is the strongest part of the game. Whilst elements on their own play simply, putting all of it together makes it enjoyable. Taking it across the Overworld to improve Airoheart was a loop that got me hooked. Though some of the purchasable upgrades – like Swords, Backpack Space – come a bit too late in the game, the progression felt steady.

Airoheart boasts a 16-Bit Pixel Art style that for the most part gets it right, when recreating that retro feel. However, some of the design choices felt a little over detailed making the presentation a lot to take in at times. Early on I found the grass to be quite dizzying to traverse across, which is definitely personal taste but when it was lumped in with the first impressions of the gameplay, it wasn’t looking great.

But I can say that later on the varying environments became an absolute joy to explore. All the dungeons varied in their design, with different areas of the world having their own biomes adding scale to the Overworld; all the Character designs being so diverse made the game feel massive despite the map being explorable in around 30 minutes.

Music takes audible cues from the limitations of the SNES and although the songs don’t have a long runtime, the loop is infectious, extremely memorable and varied to fit the emotion of the situation. Some of the highlights were the darker parts of the story where the moody atmospheric drones and the chimes evoking lost hope would be a great listen outside of the game.As I understand, as well as the game development, Samuel North did all of the art and music. A huge undertaking for the game that overall comes out strong. It may not be anything new to people who are fans of the genre, but it’s vibrant, varied and at some points so impressive. Coupled with the livelihood of Engard, it’s great at capturing the essence of some of the most memorable worlds in games.

Airoheart has been a hard one to review; it’s taken way too much from Zelda: ALTTP. So much so that I’ve struggled to separate it as its own game. Combat and the map are dated back to the 90’s, and since then we’ve seen vast improvements in games of this genre. But the world created, the characters and overall design are shining highlights that maybe if you’re not aware of Zelda – who’s only lived on Nintendo – this is a great rendition to playthrough. The story is around 20 hours but if you’re looking for a completionist playthrough you’re looking closer to 30, offering much to chew on.

Being a step beyond inspiration and dated in its mechanics, Airoheart is an obtuse yet magical game to delve into. Pixel Heart Studio’s debut is great but often hindered by its imitation. Though the unique aspects are what kept me playing, I just wish there was more originality.