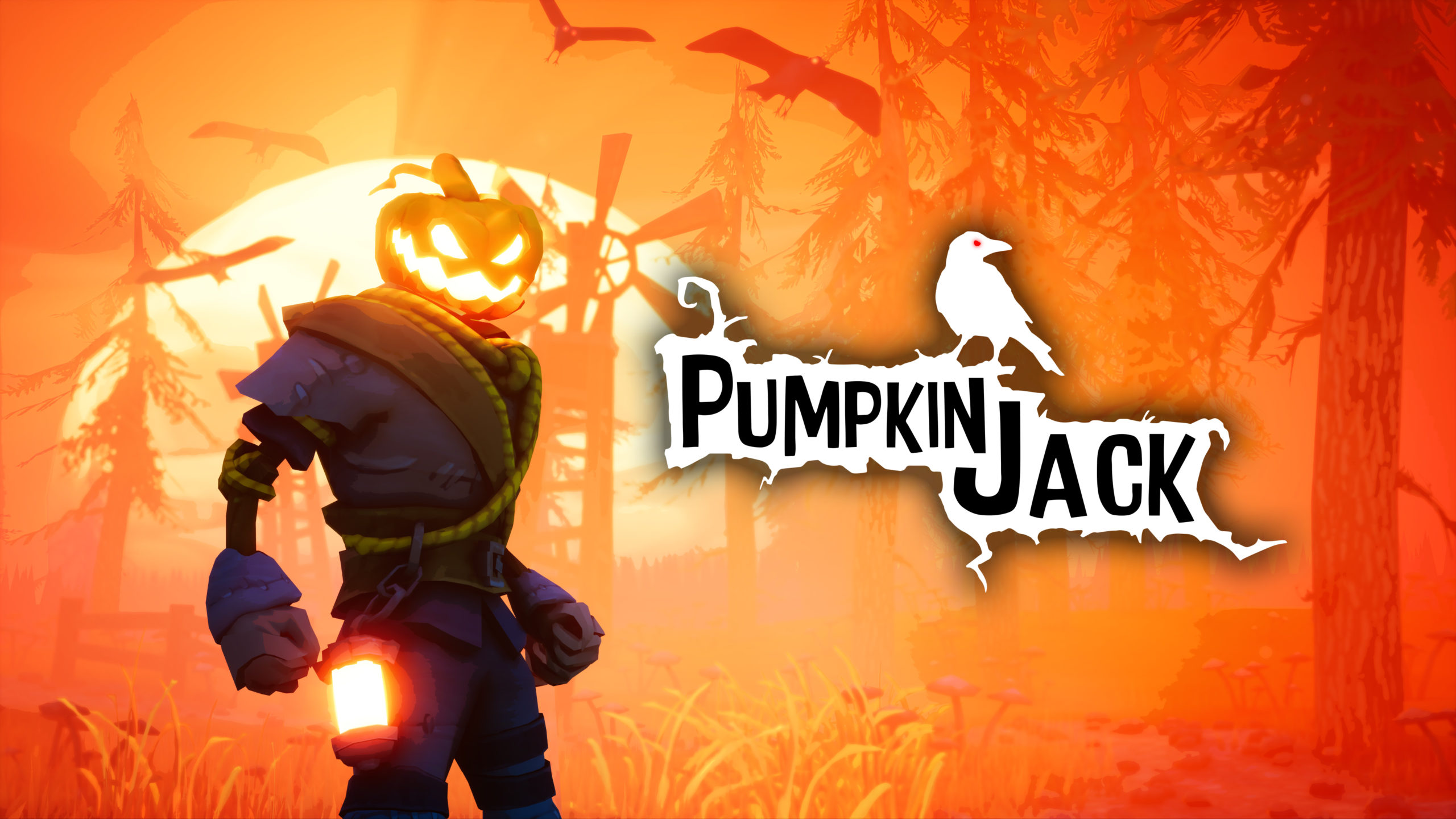 Trick or Treat! Pumpkin Jack joins the Halloween game collection on next gen consoles. A 3D spooky platformer pumpkin, and he's not a good guy! The Finger Guns Review.

We are well into spooky season now, and Pumpkin Jack arrives on next gen consoles. How is the Medieval inspired platformer? The Finger Guns Review.

Hello Spooky people, it’s a wonderful time of year isn’t it? For Halloween delights, and ghoulie scares. What could be better than bringing a spooky themed game into the mix to really enjoy the groove of pumpkin soup and rotting teeth. Pumpkin Jack has come to next gen consoles after being initially releasing in 2020 on their predecessors. Who is he? Why is there a man with a pumpkin on his head? Is it for his Instagram? Well, listen up.

A dark, but vibrantly spooky kingdom where nothing goes wrong has got the devil feeling incredibly bored. He unleashes a curse of the Eternal Knight to stir up trouble and see turmoil enter the Kingdom (as you do, when you are Lucifer himself!). Residents of Boredom Kingdom are not happy that their daily routine has been interrupted with monsters, so summon a powerful Wizard to help resume calm to the Kingdom. Lucifer is livid with such actions from the townspeople and thus summoned from his deathly slumber Jack, the Pumpkin Lord to defeat the wizard so chaos can continue to ensue.

Pumpkin Jack is made up of 6 levels, 6 bosses and 6 wonderful outfits for you to collect. 666 – Coincidence? I think not. Immediately, the music will throw you into an All Hallows Eve vibe. It is obvious the creator certainly enjoyed the OG platformers of the yonder years of the PS2/PS3 era. You’ll notice the inspiration taken from the likes of the MediEvil, and other 3D platforming classics.

The game opens with a storybook narrative, keeping you on top of the Devil’s gnarly plans and Jack’s latest mission or obstacle. Taking the formula of those early classics, you are plunged into the Kingdom of darkness, monsters, and spooky goo. The storybook interlude are a welcoming recap of the story and your current progress, as well as Jack’s next objective towards defeating the wizard.

The story is entertaining and the dialogue between Jack and other characters is witty and full of everything you’d expect when conversing with peers of the dead. Every adventurer needs a sidekick right? Jack reluctantly accepts the help from a crow who proves to be a useful and needed companion along the way. The control of the crow will allow Jack to hit enemies, knock over bridges, planks and other objects to each your destination, whilst also boost morale with sarcastic quips. For someone who was brought back to life, Jack sure does have an attitude problem.

Each level offers a sinister selection of different areas to explore from haunted mines to the cemetery. Jack will need to follow the Wizard’s trail and fight through the monsters blocking his way to the Wizard. No area looks or moves the same as any other location. The design takes advantages of the classic locations that we all relate to Halloween, and visually it uses the advantage of purples, greens and orange, with an eerie glow-y hue throughout. As a player, the design immerses you in the mysterious darkness that you almost forget you don’t live in a nightmare before Christmas.

A platformer that incorporates creative fun puzzles during each location. Each level location is pretty linear and at times there are times where Jack will be unable to travel further. Jack will unscrew his head and give it to the crow to wear for a minigame puzzle that quite a delight. I had so much fun squelching around playing whack-a-mole or throwing Santa’s presents at him to make his house explode. No minigame puzzle was too difficult and it was exciting to see what the next puzzle would do.

As well as making poor old Jack headless, many of the levels have different ‘on rails’ sections and even these were cleverly made up of different physics and creative, individual ideas. During these parts however, it did feel like the latency of the controls differed somewhat depending what was being done. I found myself feeling fully in control of Jack in a minecart, and encumbered when flying or being sucked into a vortex.

Speaking of a Nightmare Before Christmas, every cliche, pun and trope to do with Halloween is going to greet you in Pumpkin Jack, and it is not done in a sickly sweet way at all. With every area, Jack will have to face new foe’s. From bats, to scarecrows to fire snowball spitting snowmen. Each enemy type will bring different weaponry, movement and damage per hit. You can be in a muddle pretty quickly as some enemy’s have nests to spawn from. If the nest is not destroyed quickly enough you’ll be over run and either succumb to your fate or run and recover.

Pumpkin Jack keeps combat simple with a green status bar that will deplete when hit, and the classic button bashing of the square button for different moves. Collecting health comes in the form of little orbs that will drop from fallen foe, or by destroying objects around you. If you die – don’t panic. You will be sent to your recent checkpoint but not before the game mocks you for how many times you have died thus far. Keeping a tally of all your failures whilst rubbing it in your face. This, although small was something that made me audibly laugh out loud.

Just like the old days, with every level brings a new boss to defeat. There is something really warm in my heart about the old school platforming formula of a level, wondering which big bad is waiting for me at the end, and Pumpkin Jack did not disappoint. Each boss greets Jack with a new way to try and defeat him and the battle’s are not copy and pasted between any of the 6 baddies.

It wouldn’t be a platform adventure game without collectibles. Within each level 20 crow skulls are hidden within the environment, they encourage exploration and so some are blatantly placed so they punch you in the face, and others that will take a good eye to spot. At times it felt that gravity was not on my side when climbing towers or balancing on wood to collect these, it can feel clunky, but it adds to the character of old school game playing.

Additionally to skull crows, one gramophone is also hidden within each location. These are not so easily found and will take some cunning to figure out if there is a secret passage over a lake or behind a building to find these. Once found, Jack will do what I can only describe as the Monster Mash. It’s obvious that Pumpkin Jack isn’t trying too hard and wants every player to have fun and laugh.

Although not technically a collectible, new weaponry is unlocked at the end of every level. Each one combatting in different ways as the levels progress, players will likely have a favourite, whether this be a gun, or a scythe or something else. My personal favourite was the talking sword. Players are able to swap in and out using L1 (or your platform alternative) when the weapon has been collected.

At times again, it felt there were some latency issues with combat, especially fighting multiple enemies at once but again…I put this down to the charm of a game trying to encapsulate old controls. Although this is something players should be aware of if they were thinking of upgrading from the PS4 version.

If a collectable is missed, do not fear, the game has chapter select for any crow skulls or gramophones that slipped you by.

Overall, Pumpkin Jack pulled me back into the past so I could remember why I fell in love with gaming to begin with. I started out paying adventure games with the likes of Spyro, Medieval, and Crash. If you told me this was a remaster of an old PS2 game, I would believe it. It reminds us of the original formula of adventure platform, albeit still capturing the clunkyness. However, the variety within the game can’t be faulted. The game time runs at around 6 hours and is extremely impressive from a single person indie creator. Although it doesn’t bring anything new or ground breaking to the table, sometimes it’s just nice to walk down memory lane in a new way.

Pumpkin Jack might not add anything ground-breaking to the genre, but it’s an adventure platformer that tastes like home. Reminiscent of old school games such as Medieval, Spyro the Dragon, and Bugs Bunny: Lost In Time, it’s a joyful experience with a wide variety of game play. Albeit a bit clunky with controls and combat, the humour, dialogue and character capturing that Halloween spirit exceeds those trivial irks.

Pumpkin Jack is available now on PlayStation 4, Xbox One, Android, Microsoft Windows and Nintendo Switch. The PlayStation 5 (review platform) and Xbox Series S|X versions of the game are launching on October 27th, 2021.