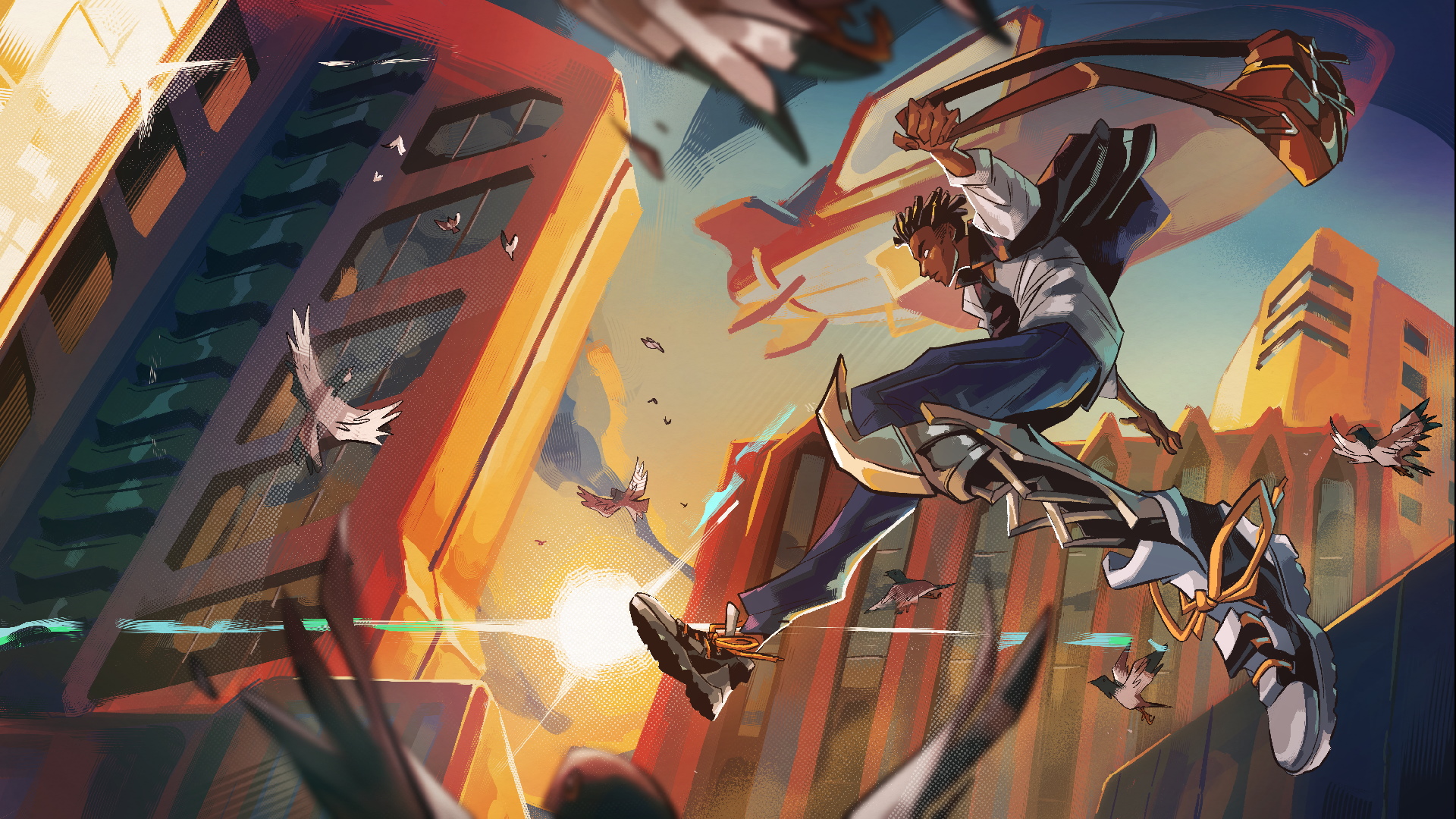 A fast paced, side-scrolling blast, Aerial_Knight's Never Yield is a fun runner. But does its lack of variety hamper any desire to play it again? The Finger Guns review:

I never bought into the whole “endless runner” craze. Games like Temple Run, or Sonic Dash, that just keep sucking you in with samey phone-like attitudes. Even Super Meat Boy tried it, and that didn’t go well. So it’s no surprise that something like Aerial_Knight’s Never Yield passed under my radar entirely.

A side-scrolling, reaction-based runner, Never Yield is a bombastic and action-packed title. Utilising a simple button system, this platformer is a side-on take on the likes of Temple Run and the old Hugo games (made popular by the Saturday morning show, What’s Up Doc? for the older ones). Run, jump, slide and… run faster, that’s the main tenet.

In this trying time, is a quick-fix kind of game what we need right now, or is the lack of any real substance what lets this runner down? Let’s find out.

Admittedly, I’d never heard of Aerial_Knight before this came out. A quick bit of research later, and we discover that he’s a 3D artist by the name of Neil Jones. As well as digital art, Jones also has a catalogue of work on indie games. Of which, Never Yield was born.

The game revolves around Wally, a young lad with a cybernetic leg in a futuristic version of Detroit. Ol’ one-leg Wally discovers something he shouldn’t, which makes him a prime target by suppression forces lest the truth die with him. Given that that would be bad for everyone, Wally decides to leg it across a dozen or so stages of evading capture.

This is done by constantly running, jumping, sliding and throwing some mad parkour skills into the mix. Stopping isn’t an option, nor is crashing into anything or dallying too long to be shot. Your mission is simple: run, Wally, run!

Escaping To The Furthest Right

In its simplest terms, Never Yield is a platformer. Players start on the left hand side of the screen, and have to run a gauntlet to the right. But what separates this from your hedgehogs and plumbers is that players have no control over the flow. Well, they do a tad, but only in terms of speed of play.

Wally has four skills, tied to both the face and directional-pad buttons. Following on-screen, colour-coded prompts, Wally can jump over, slide over or kind-of parkour between obstacles when needed. The fourth “skill”, as it were, is a speed boost, which will allow Wally to run through certain obstacles and barriers.

Prompts are given in advance in the top right corner of the screen, giving players time to anticipate what’s coming next. The time you have to react depends on what difficulty you’re playing on.

It’s All A Blur

If you’re unfamiliar with quick-fire runners, or are old like me and your reflexes shot, the normal difficulty has you covered. Time slows down just before an obstacle comes at you, giving ample opportunity to hit the correct button. Even if there’s a succession of objects, it’s never too stressful on the game’s part. Just your own in remembering what button does what.

It’s when players start upping the challenge that the game becomes a finger-flicking frenzy. For one, the slow-motion window is smaller, or completely removed. This makes it akin to the higher levels of, say, a musical rhythm game. Players will be on the hot foot constantly, as more obstacles get thrown into the mix.

There’s no score or combo tracker, sadly, so it would be nice to see how high you can go. With just over a dozen levels, it can get absolutely frantic in a playthrough. A normal run can take a couple of hours, a harder difficulty will take longer if you suck, or you’ll fly through it quicker if you’re some kind of fast reflex savant.

Run To The Beat

If I were good with words, I could spin a yarn about how the aesthetic of Never Yield is one of “neo-Tokyo stylings” and whatnot. As I’m not, I’ll just say it’s a bright and futuristic version of Detroit, complete with random background explosions and loud colours.

Despite being a 2D runner, think of it more as a 2.5D game: flat running in a 3D world. If you can tear your eyes away from Wally’s actions, there’s plenty going on during each level. Almost like a Trials game; background shenanigans add more to proceedings, but the trick is to not get distracted by it all.

Accompanying the crazy visuals is an equally funky soundtrack. If I had to pick a genre, I’d put it down as “upbeat jazz”. It reminds me of old Disney films, normally the bit that involves a chase sequence, fittingly enough. I think they missed a trick by not syncing it up to the obstacles, Def Jam Icon-style, but you can’t have everything.

Whilst Never Yield does paint itself as a fun and exciting arcade-like game, that’s unfortunately its biggest problem. It is great when you get into a rhythm, cruising through the first few levels and getting decent times, but that novelty wears off soon enough. A dozen doughnuts seems like a good idea, until you eat the first few and get sick of them.

So yes, you could argue that you don’t have to play all the levels in one go. But the problem is, there’s no variety in the gameplay, bar a couple of level changes. Throwing in some verticality on one level and a slight direction change in another isn’t much in the way of variation, which stifles the experience.

In terms of gameplay issues, there needs to be some fine tweaking on input delays at times, or object “hit boxes”. There’d be instances of jumping when the game told me to, only to fall short and be sent to a checkpoint ten hazards back. Or sometimes failing to recognise the input at all, which didn’t help the growing frustration.

Or, and this may just be a personal instance, having my progress reset three times so I had to do the first couple of levels repeatedly. You could say it might have coloured my negative opinion on repetition above, having to play the same level repeatedly. But no, I’m not exaggerating about the copy-paste level design.

Running Out of Steam

In conclusion, Aerial_Knight’s Never Yield is the gaming version of a TikTok. It’s all bright colours, loud noises and will keep your eyes glued to the screen. But when the novelty and repetition sets in, players will want to move on to something else.

The main problem is there’s no real incentive to go back to it. Apart from some costume unlocks, there’s little replay value to be had. Perhaps you might want to try the higher difficulties, or attempt Survival mode, fair play to you. But outside of that, there isn’t much to really go back for.

Whilst it’s cool that Super Rare like to port indie games (and were kind enough to send us one), it feels like this should be a collectible only. Like owning the worst James Bond films just to have them in a systematic order. It is a fun game, at least to start with, but it’s not long before repetition and grind take over.

What starts off a fun runner, Aerial_Knight’s Never Yield quickly devolves into a bland and repetitive experience. Whilst the colours are bright and the music loud, the lack of replayability or extra modes doesn’t leave it a leg to stand on.

Disclaimer: In order to complete this review, we were provided with a copy of the game by Super Rare Games. For our full review policy, please go here.