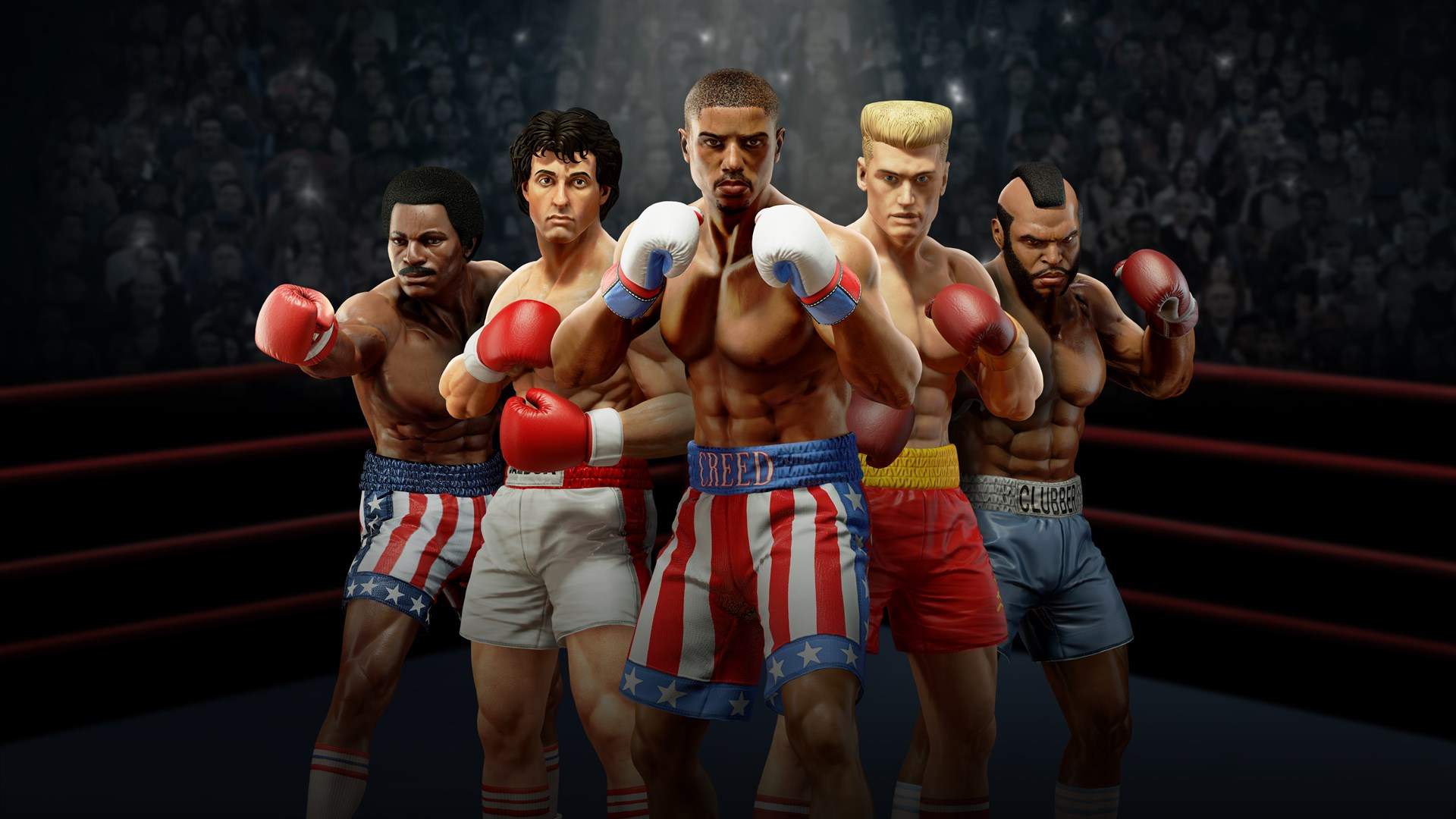 Despite it’s earnest attempts to deliver Rocky and Creed fans a fun and arcade-like fighting experience, Big Rumble Boxing sadly cannot stand up to the heavyweights.

Admission time. I’ve never watched the Rocky nor Creed movies. Disgraceful, I know. One day I plan to rectify this travesty of my existence, promise. I have, however, practiced Muay Thai in the past for about 2 years before the pandemic ravaged society. Boxing and martial arts have therefore been something I’ve been quite privy to and interested in.

With the success of other popular sports branded titles like UFC and historical series like Fight Night, there’s certainly appetite for a solid boxing game. In theory, Big Rumble Boxing should be well placed to capitalize on that potential. Basing itself on the Rocky and Creed movies with their associated background lore, it has the opportunity to appeal to older, nostalgic fans and newer entrants to the boxing franchises.

Big Rumble Boxing: Creed Champions doesn’t meet those lofty hopes and falls short of delivering that killer hook players may have hoped for, but it does at least land some pretty solid shots.

There are 3 options in Big Rumble: arcade, versus and training. The tutorial encompases 16 text box screens at the main menu, but luckily the mechanics aren’t especially deep so you can hop in even as a newcomer and get to grips with it pretty rapidly. Arcade mode is therefore the default mode for solo play and where you’ll probably spend the bulk of your time.

To its credit, the roster for Creed Champions is filled with characters, villains and familiar faces from the franchises. Rocky, Drago son and dad, Apollo, Mr T’s hulking beast of a human frame and others are all present, playable and have their own arcade stories. Completing one of the first 10 available characters unlocks their second associated character for the arcade run, so there’s plenty to test your boxing credentials with.

The “story” for each famous face however, is exceptionally limited. The majority of dialogue is text-only with every scene delivered via a static backdrop with cardboard-cutout expressions and grunts for sound effects. Most of the narrative is pretty basic and from what I can gather makes reference to the stories within the movies and wider universe. It was largely forgettable and for me, added little to the overall experience. Rocky and Creed enthusiasts however may glean a little more and I imagine there’s some nice references that will let you live out your Rocky fantasies to some degree.

Completing each character’s story unlocks a couple of additional outfits you can personalise your ideal icon with, which is a nice touch.

Arcade runs are comprised of around 6 fights, supposedly increasing in difficulty and spectacle but in truth this seemed completely variable. In between fights there’ll be a chunk of text dialogue to provide some context for your next bludgeoning battle. Occasionally, you’ll even get a chance to engage with some, admittedly pointless, minigame montages.

Acting as glorified quick time events lasting less than a minute each, you’ll be tasked with punching carcasses and punchbags in button sequences, pressing L2 and R2 to run on a treadmill and practicing your dodges and counteracts with R2 and square. To say these minigames are basic is would an insult to even the most basic game mechanics. They lack any form of challenge and do nothing for your overall progression. You’re scored out of 3 stars at the end and this means literally nil to your success as it contributes towards nothing. As a diversion they’re tolerable, but the game would lose nothing of its content offering by skipping them altogether. It was pretty cool the first time to have my own montage as Rocky to Eye of The Tiger though and it’s obviously meant as an homage to the film’s epic training sequences, but it just falls flat.

In the ring, Creed Champions fares slightly better against the heavy punches. Characters are separated into 3 types of fighter: slugger, general and swarmer. Sluggers hit hard, generals are all-rounders and swarmers are speedy with lots of hits. Each class and character has their own special heavy attack and some different animations, but the fighting mechanics largely work identically. That is to say, they’re exceptionally simplistic.

Square acts as your light punches, triangle allows you to do a heavier smack. The directional buttons or analog stick direction will change up what move you throw. Circle offers a grapple – an animation that instantly hits your opponent once for decent damage. Lastly, you have a special move, triggered with L2. As you build up hits, your special meter grows. Once it hits maximum, you can unleash your special attack for significant damage, provided you land the animation without it being blocked or dodged. If you’ve played any fighting game before, this will be standard fare for you.

Regular combos can get you surprisingly far and some of the powered up heavy attacks (Drago’s backward Triangle move, for example) are pretty overpowered and abusable against the AI. Defensively, you have the option to block, dodge and slip counter. Blocking is based on your stamina gauge – block once too many times you’ll end up dazed and vulnerable. Slip countering is the precise dodge mechanic, where timing your press at the exact moment your opponent’s hit lands is key.

Other than timing your shots and carefully choosing when to launch your special move, there’s little else to really have to account for or pay attention to. The CPU can put up a decent, if limited challenge on rookie and pro, with champion adding a bit more need for defensive capability. Overall though, I rarely found myself truly engaged with the mechanics and largely found no need to experiment with combos, as basic barrages seemed to work perfectly well on any difficulty.

The mechanics work fairly enough, with some dodgy occasional input for starting blocks and questionable hit boxes for special moves to land, there’s just a lack of variety that stifles the game’s core gameplay loop. Fights quickly descend into routine, monotonous and repetitive slogs. You have to knock down each opponent a minimum of 3 times (with the obligatory recovery at 9 on the count almost every fight) and after a couple of arcade runs and trying each difficulty, there’s little else to really test your resolve. It’s a well-rounded, solid jab, but with no flair or excitement. Plenty of dancing butterfly but no stinging bee.

Big Rumble Boxing’s presentation unfortunately doesn’t do much to salvage or enhance the game either. Characters only have a couple of lines for intros and victory quips. The backdrops to the fighting rings are barebones and the “audience” look more like low-poly Nintendo Miis than actual people. There’s a dearth of in-match commentary and the few lines there are are repeated ad-nauseam which gives the title a real sterile and lifeless appearance.

Which is actually a shame, because the art style actually has some promise. The character models, while clearly cartoon inspired and slightly caricatured in their appearance, are pretty good and are accurate representations of the titular characters of the films. Fighting animations and effects are colourful and vibrant at times, with some special moves holding quite an oomph of power behind them. There’s some authentic references in-between fights which even as someone who only loosely knows the lore could tell were nicely placed.

But after two hours of gameplay, I’d effectively seen, and done, everything Creed Champions has to offer. With only two proper modes and a restricted combat system, Big Rumble just doesn’t have the legs to keep up for multiple rounds. There’s some arcadey fun to be had, and I imagine for fans of the films who want to have a couple of drinks and beat each other down as their favourite icons, there’s some potential fun to be had here.

Starting at £34.99 though, I’m just not sure there’s enough content and depth to justify a purchase. If you’re a die hard fan, this will at least give you an opportunity to have an easy, enjoyable time as your favourite characters. For anyone looking for a deep, replayable or in-depth fighting game however, there’s just sadly not enough to recommend.

Despite its earnest attempts to deliver Rocky and Creed fans a fun and arcade-like fighting experience, Big Rumble Boxing sadly cannot stand up to the heavyweights or even middleweights of the fighting game genre. Suffering from repetitive mechanics, a shallow content offering and an art style that has great character models but lifeless fight presentation, Creed Champions falters under the softest of hooks.