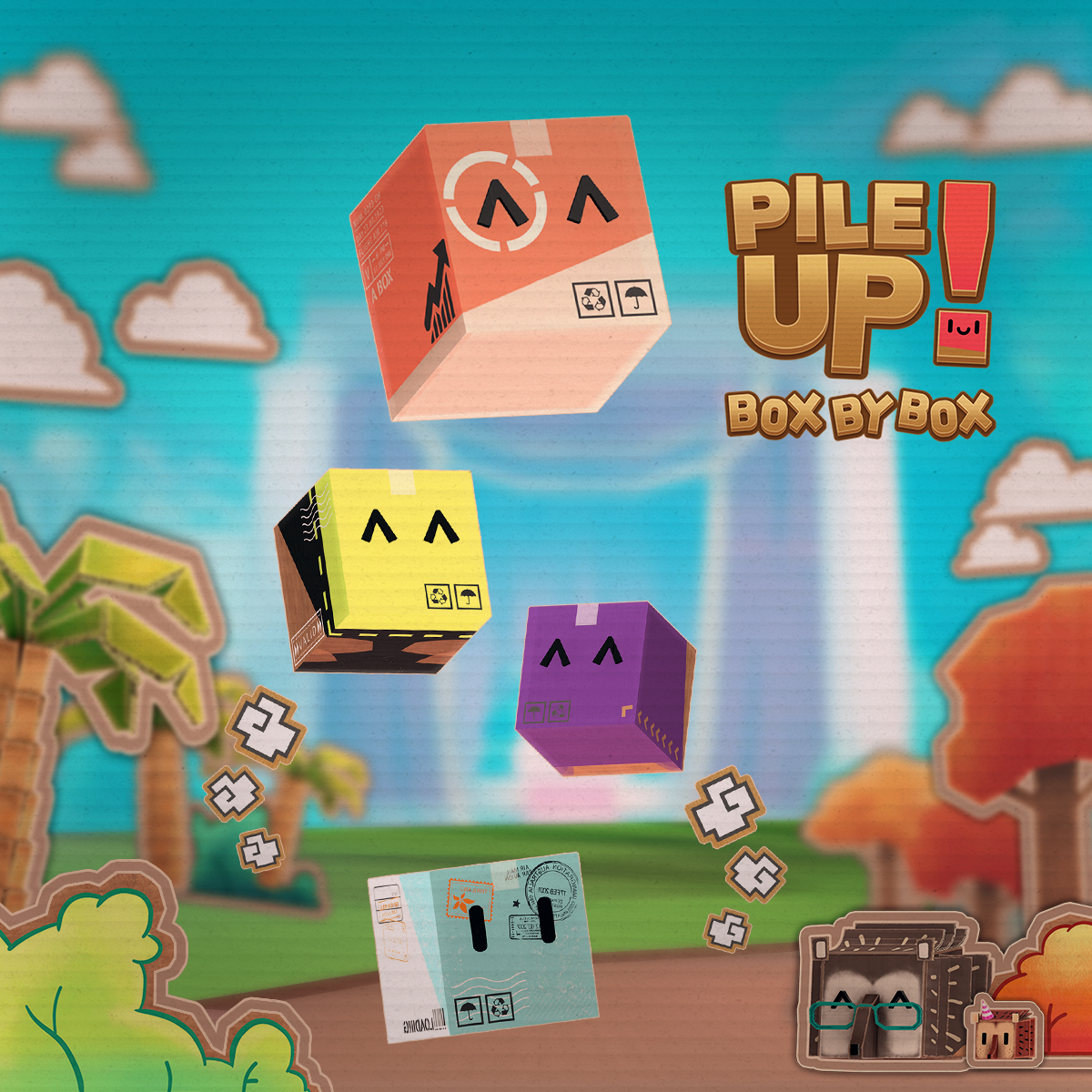 With the likes of Overcooked, Switch N' Bake, Moving Out, will Pile Up! match up to the rest of them? The Finger Guns review:

Co-op games are a funny bunch, there can be so much right with them, and so much wrong with them too. I don’t think the co-op world has had it’s surface scratched yet, but in the last few years some games have given it a good go. Pile Up! Box by Box is putting its hat in the ring, and joining the pile (excuse the pun). Let’s get into some of the boxes it ticks, and some it misses.

Pile Up! Box by Box is a 1-4 couch co-op platformer game, where players explore four different worlds, manoeuvring and co-ordinating themselves around the cute coloured cardboard environments. This is not a game of enemies attacking or fighting big boss battles together, but more of collecting, team building and working on puzzles together.

The world surrounding you becomes barren and it is your job to go to each world and collect keys, cubes, and circles to bring life back into the area. The music is extremely catchy, giving this a jungle drum vibe. The surroundings are aesthetically pleasing and you can tell effort has gone into them to make them as box punned as possible. You control ‘Boxlings’, you have the choice of colour and main look per character. There is also an opportunity to get more skins, I personally enjoyed looking like a box watermelon or box sushi. The areas you walk over to get to the next part involves flattening down more cardboard. The main hub area is aptly named the ‘Boxling Arena’. This is where you enter the worlds, enter an arcade vs mode to play classic arcade games with your friends, or change your skin. There is also lots to collect here too.

There are four main levels of the game all designed with different themes such as a sandy beach, or stage theatre. Allowing the player to work together with friends with different architecture, levels, and giving the player a range of different obstacles to overcome. Each level will have a main mission, and this may include finding missing friends, or finding extravagant lost stage items. Around each level are collectables, some much harder to reach than others. This is where working together is key. As players you will need to complete the main mission, but also find arcade games to unlock them, and collect cubes and circles.

Cubes are similar to Pac-Man dots, they are easy to spot and there are plenty of them! 400 per level in fact so they are healthily placed to guide you around the level. Some will be harder to reach than others. Circles are few and far between and will be dotted around the level, most of these require skill and a bit of thought to capture but some are nicely given to you!

To do this you may have to do a variety of different things such as jump on each other to create a cardboard box tower, or use cardboard boxes around you to make your tower as tall as the Eiffel tower! Okay… not really that tall but quite tall sometimes! You can be creative and make cardboard steps, it’s really up to you how you platform around the level.

Circles are important because they unlock a ‘star’ portion of each level, where more boxes and more circles are hiding away. The levels themselves are not small, they have many a nook and crannies to explore. With each world adding a new power element to your arsenal. This will allow you to jump high, or grab boxes from far away. At times it is important to remember to take these very helpful boxes with you! You can do this by piling them up on you and transporting them around. The game level design is smart and will at times catch you out with area’s you can take no additional boxes forward. So if you thought ‘oh this will be easy i will just take a whole tower with me everywhere I go’. I already played that out so you didn’t have too.

This game doesn’t need many other players, in fact it holds the same fun solo. But I couldn’t help but wonder if some things were impossible without another player. Even sometimes just getting a boost up when no boxes were around. It feels the game may be significantly easier with more collabouration on your team, but I did manage to collect mostly everything solo.

Something that does require you a friend or two to play is the arcade section. In each level you will discover a new arcade game that unlocks. These are cute one off rounds of things like football, catch the flag, and tic-tac-toe. It is reminiscent of Fall Guys, or the mini games that come with the Mario Party. These can be a-lot of fun to play around with.

The platforming is fun, but something that is really crucial is that the controls work. I found multiple times that when really needed, the jump button just wasn’t there for me like I wanted it to be. I would just kindly slide off the end into the water and lose my place. It would happen over and over. When I teamed with a friend, they found this too and it isn’t game breaking but can get incredibly frustrating in certain harder to get to places where jumping needs to be succinct and flow well.

There are a few other odd things that made me scratch my head. There are many portals per world that will lead you back to the Boxling Arena, but if you have collected all you can collect, you must make sure that you are going through the right portal or it won’t count. Even sending yourself to the arena, will still not make it count (i.e the trophy won’t pop to register you have actually collected everything). This was weird and in one instance I had 399/400 cubes, had to navigate the whole world, and then re-navigate to find the ‘right’ portal.

On the note of collecting, the worlds are somewhat large, they are not your standard linear levels where you have one direction to go in. This is a positive as it allows for lots of discovery, direction and exploration. But no map? No indicator of where my one tiny cube was?! Not even a pointy arrow to say I am hotter or colder? That felt mean. It is something that certainly would add the extra quality of life. There will be many people who may dip in and out of this game, like many people who play co-ops and may want to one day return to gather all the collectables solo. They will fall into this problem where they have to fine tooth comb every area of the map if they are just a few short. For some people, that might mean they can’t be bothered, but with a map, that just might make the task less tedious.

Additionally, I wasn’t able to allow others to ‘dip in and out’. If they left the game, it would not allow me to continue on. I had lost all control of my character and had to quit out to menu and restart. I tried this multiple different ways to see if It was just me, but each time someone took their character out of the game and turned off their controller, I lost the ability to carry on solo.

Overall this game is quite short when compared to those such as Overcooked! or the Lego series, but does pack a lot to do in a short time. The replayability is certainly there, because every world would add a different element depending on how many people you had. Plus the arcade games make fun for any age and any player skill. If someone was new to co-op games or had a short time investment, Pile Up! is an easy recommendation.

Pile Up! Box by Box is a 1-4 co op platform game. It can be played solo or with friends with four worlds to explore. This game is a fun entertaining friendly game that I would recommend to anyone who likes co-op or is new to co-op. It has a few quality of life issues, such as a lack of a map, and the jump button not quite being up to par when crucial, but has lots to do for it’s short run time that can still pack a good night in gaming.

Pile Up! Box by Box is now available on Steam, Xbox One, Xbox Series S|X and PS4/PS5 (reviewed on PS5).