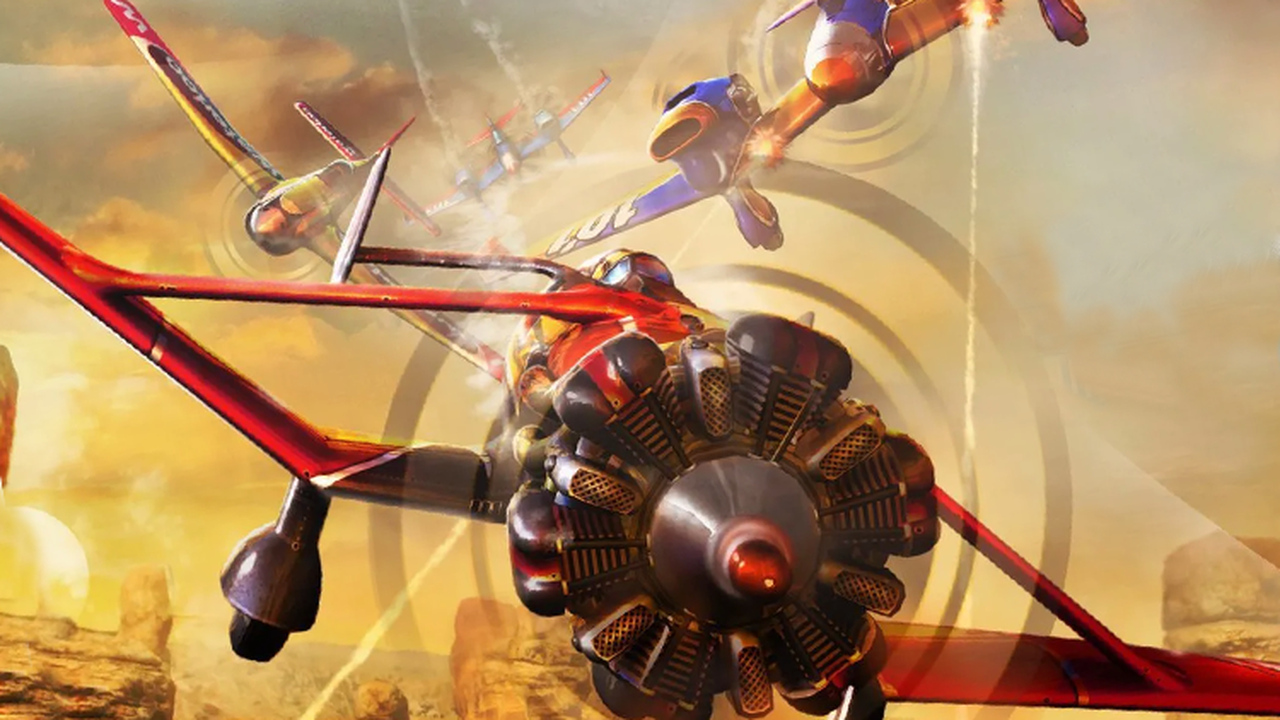 A fast and fun return to the days of arcade racers, does SkyDrift Infinity have what it takes to hit that nostalgia? The Finger Guns review:

As the diminutive cultist once said in that movie about planes, “I feel the need. The need for speed”. There’s an inherent thrill in zipping around dangerous courses at breakneck speeds, edging your way to first place. Short of training to be a pilot, SkyDrift Infinity is trying to scratch that itch.

It’s been a good while since the days of F-Zero and Extreme G led us on eyeball-melting rides. Seventeen years for the former, eighteen for the latter. We’ve had a port of Star Wars Episode I: Racer and a remake of Rollcage in GRIP, and of course, WipeOut comes and goes when it feels like it. Gamers haven’t had anything either recent or non-futuristic in quite a while.

So when SkyDrift Infinity flew into FGHQ, I thought I’d give it a whirl. It looked fast, it looked pretty frantic and overall, it looked fun. Let’s find out if first impressions carry through to longevity, shall we…

First and foremost, SkyDrift Infinity is pure arcade shenanigans. No simulation, no super-precise-obeying-the-laws-of-physics flying, or anything else Microsoft put into Flight Simulator. Well, except the flying bit.

No, this is the “firing missiles whilst air-drifting around corners” type of flying, and I am all for it. You pick your craft based on what stats suit the type of race, put a funky livery on it and prepare for high octane speed and dog fighting.

Races are divided into Power Races, which is your standard Diddy Kong Racing affair, or Speed Races. As the name suggests, Speed Races eschew weapons in favour of boost rings and precision manoeuvring. This, for me, is where the Extreme G/F-Zero comparisons hit.

Fly For Your Life

Having the divide works in favour for SkyDrift Infinity, but that doesn’t mean Power Races are slow and steady. They may seem like it at the start, but that’s because players are limited by their aircraft. But when courses get more elaborate, and planes get faster, it becomes tense as you chase gold medals and pole position.

The weapon selection isn’t too elaborate, in terms of creativity, but it’s certainly effective. There’s no blue shell-like first place chaser, but there are homing missiles. No banana peels, yet there are shock fields to slow other racers down. Conversely, there are shields and repair pickups that will give you a reprieve… if you’re not shot down in that time.

There’s only a handful of both offensive and defensive pickups, but thankfully, they can be upgraded. Picking up the same item twice gives it a second level, increasing its potential. More missile damage, bigger mine explosive field, longer lasting shield, that kind of thing. That you can have two at a time, and can switch between, also adds an element of fighting tactic to each race.

Soaring Through The Skies

Whilst the dogfights are entertaining in an old-fashioned/cart racer sense, variety is always welcome. That’s where the Speed Races come in to play. Eschewing weapons for boost rings, there are a couple of variations on this fast theme that make it entertaining.

The first is a straight forward, lap-based Speed Race. No firepower, but you still retain your boost gauge, earned by flying dangerously close to the environment. Yet that won’t be enough, as the enemy can and will utilise the same boost rings floating about the course.

This is what makes me think of F-Zero, WipeOut et all: breakneck speeds, fast reflex cornering and knife’s edge flying. It reminds me of a something Acclaim would put out; that Burnout-era of arcade thrills under the guise of a console game. And I loved it.

There’s a Survivor-style elimination mode to add some spice to racing. Happy sitting in third place to maybe push forward on the last lap? Not today, sunshine, you’ve got to get competitive lest you explode.

Like anything, racing planes needs the right tool for the job. It’s all well and good having the fastest craft for Speed Races, but in a Power Race you’ll be torn up faster than a Kleenex at a snot party.

Conversely, no sense in having a heavily armoured aircraft in a Speed Race, as no one will be shooting at you. Thankfully, SkyDrift Infinity does cater to these modes.

They’ve all got jazzy names, as is expected. None of this MiG this or F-16 that, it’s all Warbird, Vanguard and Speedster for maximum arcade funkiness. There’s even some tie-in planes with Darksiders, of all games. I don’t recall War, Death or Fury engaging in dogfights, but any promotion still counts, I suppose.

Each plane comes with a set of unlockable liveries too, to add some flair. It’s all cosmetic, of course, but thankfully not hidden behind paywall. Just good old fashioned player progression.

Whilst this would normally be the part of the review where I criticise or complain about things, I can’t really find fault with SkyDrift Infinity. However, that’s not to say it’s a perfect game. No game is perfect… except maybe Hades. Yet SkyDrift does get brownie points for at least being fun.

Were I to be petty, I could say, “The whole ‘brake/airdrifting around corners mechanic is fiddly at best”. But that’s just user error. Could I grumble about how the tutorial seems pretty fit to slap you on your bum and send you on your way, as it treats you like you know all of this? Or that it assumes you’ve played the original SkyDrift and how dare players only get on board now?

No, because that would be petulance for the sake of trying to find fault. Instead, take this fun, over the top flying-kart racer as exactly that. Whether you’re going to play through the career and unlock golds throughout, or playing either couch or online multiplayer, there’s a great time to be had here.

It’ll take time and practice, just like Mario Kart used to to smash the higher cups. This is no different, and that’s what twiddles the little nostalgia part at the back of my brain. It doesn’t need the best graphics or realistic aerodynamics, it’s just fun.

The Skies Are Yours For The Taking

To summarise, SkyDrift Infinity is going to get a recommendation from me. Not a “Game of the Year” or “You must play this” kind, or a shallow thumbs up with an element attached to it. Just a recommendation if you like the classic era of kart racing games.

In the absence of a new Burnout, or even F-Zero or Extreme G, SkyDrift Infinity at least attempts to scratch that itch. It doesn’t have much in the way of depth, with its handful of modes. Sure, the maps will become repetitive over time, as will the racing styles of the AI in your battle to hit first place every time.

Yet turn that pessimistic bent around, and look at it from a brighter perspective, and there’s a fun little throwback of an arcade racer to be had here. If you don’t have the budget for massive titles yet fancy something like a more aggressive Diddy Kong Racing, this is the game for you.

Whilst it may seem like a no thrills arcade entry, SkyDrift Infinity carries itself well with its gameplay. A kart-game-with-aeroplanes, it hits that nostalgic, high speed level of fun that we haven’t had since the early 2000’s, before everything became all boring and serious.

SkyDrift Infinity is available now on PlayStation 4 (reviewed on PS5), Xbox One, Nintendo Switch and PC.