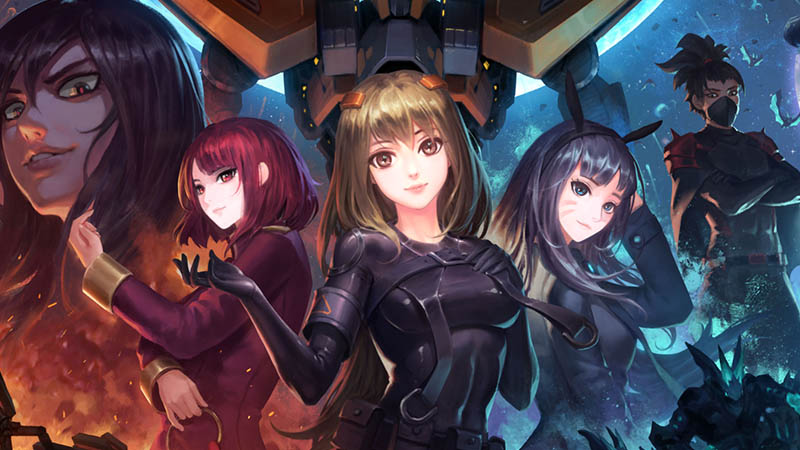 It may sound like the part you're missing from your new TV cabinet, but Metal Unit is a pixelart roguelite where exosuit-wearing anime girls try to save the planet! Is it worth a play, we take a look. The Finger Guns Review:

Ever do that thing where you stare at a word for too long, or write it too many times and it loses all sense of reality? That’s where I am with Metal Unit right now. Metal Unit has to rank among the worst titles for a video game I’ve encountered. Doesn’t exactly fill you with excitement, does it? It just sounds like a piece missing from your new Ikea furniture, along with a metal bracket and an Allen key. It doesn’t make me think of anime girls, exosuits and alien-filled sci-fi.

But this Metal Unit isn’t part of a flat-pack cabinet, it’s a fast-paced pixelart roguelite. In-game, Metal Units are exosuits worn by a few genetically enhanced anime girls (why they would be the go-to demographic for a military fighting an alien invasion, I really don’t follow, but they so often are) who venture out to defend our planet from aliens both from above and below. So grab your tiny pencil and ordersheet, and let’s see if this Metal Unit’s got all the parts it needs.

Joanna and a number of other one dimensional anime girls are our seemingly first, last and only line of defense against the worst scum of the universe. Clad in a Metal Unit, an exosuit that affords the user combat skills beyond that of a normal person, these women fight for our safety. At the start of the game you are dumped straight into Joanna’s final exam as an M-Unit user (I say user not pilot, because it’s a suit – is Tony Stark piloting the Iron Man suit?), a final exam that goes horribly wrong when Joanna says she doesn’t want to be like her sister Hana (whom we are to understand was very brash, didn’t obey orders and then joined the aliens), and yet immediately goes off half-cocked into a live-fire mission, against orders, and almost gets ejected from the program.

Your bacon is saved by yet another generic anime girl, this one called Yuna, who sacrifices herself and sets up the next section as a mission to save her in return. From here on the story becomes progressively harder and harder to follow, introducing twist after twist in a scattergun approach and having characters flit between saving and then betraying the human race at the drop of a hat. It attempts to follow a few anime conventions but even that is strained.

The enemy is essentially both Kaiju from inside the planet, and aliens from above, but nothing is as it seems and by the end you’ll have little idea whose side you are on, who you are, or even what you had for lunch that day. I felt like it was trying hard to be a good story but it was all too often bogged down in cliché and anime over-sharing.

One important thing before we go any further. Right from your first moments in Metal Unit, you can use what’s called the Assist Menu to toggle a number of cheats ‘to suit your playstyle’; you can give yourself Infinite Potions, Free Upgrades, Double Damage, Infinite Ammo, and Invincibility. You’re probably thinking, Wahey! But it’s really kind of strange to have all that right from the start. It also means the ability to cheat is right there all the time, taunting you. Use me, it says, go on. More on this in a moment.

Metal Unit mostly functions like a rogue-lite. After the initial first prologue chapter of the story and your final exam, the game gives you a hub base with access to different biomes; forest, ice and fire. Each biome requires you to make a run as far towards the end as possible before your demise. Each time you die, your weapons and pickups are counted up and converted into crystals, and these crystals are used to upgrade your abilities making you harder, better, stronger and faster. Next time hopefully you’ll make it to the boss. Buy some more potions, maybe.

There’s no mileage in rushing through and avoiding fights just to reach the boss; every enemy must be killed in every area in order to progress. There’s a helpful direction tracker on your Unit to aid you in tracking down the last elusive slug to kill so you can move on, but it does make each stage tedious.

It’s a pretty basic roguelite system that we’ve now seen a lot over the last few years. You’ll be playing the same areas over lot of times, so they need to be pretty, and though the pixel count on this game is very low, the art is vibrant. The procedural generation only seems to apply to the order and number of stages, rather than the stages themselves, which seem to be designed and recycled.

You can equip a number of different types of item; a melee weapon, a gun, rocket launchers, specials, and passive effect items. LB and RB buttons spawn big area attacks, that can massively change the course of the battle in your favour and a well-timed dodge can trigger counter defenses.

You can quickly get very capable in the combat sense, by having good upgrades and equipping Falconie, your trusty AI drone, with a large area affect attack, but the lack of readily available health potions does make early areas difficult. The combat is also quite manic, and lacks the finesse it seems to want you to use. You can’t parry for example, but you can boost out of the way of incoming attacks, and if timed well, shunt through bullets and attacks. I found this pretty hard to use in any skillful manner, instead bulking up my Metal Unit until I had so many attacks that dodging and defense were almost unnecessary. In Metal Unit attack is the best form of defence.

Metal Unit also has an issue with balanced difficulty, going from simple button-bashable to fist-shakingly punishing from one area to the next. Depending on the random drops in the first few areas, you may find yourself completely unprepared, or completely overpowered, with little space in between. You can save a few of the base weapon types to choose before you start as well, which then means you can become overpowered almost every run. With liberal use of the dodge mechanic, you can cruise through most of the game on a lucky loadout, until the final boss-rush area, which will actually tax your skills and probably send you home.

During the game’s time in early access, there must have been some feedback regarding difficulty and the Assist Mode I mentioned was added in, effectively undermining any difficulty setting that exists as standard. When you can give yourself invincibility from the first moment, a game with relatively high replayability becomes a noisy bossrush with no consequences. It would have done better to give players a variety of difficulties, or one that was far more balanced, rather than cheats. Assist mode and its benefits should really only be available in new game+.

Metal Unit’s pixelart style is exceptionally simple, lacking some of the polish we’ve come to expect from pixelart these days. Enemy and level design is nonsensical and seems to follow no in-lore pattern or aesthetic. You go from robots, to aliens, to gargoyles, to Doom-like hell beasts, with no explanation whatsoever.

The level design is also very lacking, consisting mostly of a few platforms to jump between while fighting a slew of spawning enemy types. Every now and again you’ll get a maze that a drunk rat could find its way out of. The levels offer only the bare minimum of obstacles and are just basic arenas for mashing the attack button in.

There are a few nice tunes to fight it out to, and the menu music sounds a bit like a lost track from the recent Deus Ex games. In-game sounds aren’t very interesting, and there’s quite a few war cries that Joanna makes that haven’t been translated.

While the story is full of cliched and poorly explained anime tropes, it’s the rest of the game that bored me. Combat struggles to be interesting in any way, upgrading and weapon drops throw the balance off completely, and levels and enemies give you no worthwhile reward or incentive to keep playing. If you use the cheat mode, the game can be finished in three hours, but if you don’t you’ll be forced to play for longer. If you find the bitmap pixelart aesthetic appeals to you, and the combat keeps you interested past the first hour there is a roguelite here that ticks boxes but never excels.

With its anime-trope-filled story, and starkly unbalanced combat and upgrades, Metal Unit is a passable roguelite in a genre where there are far better options.