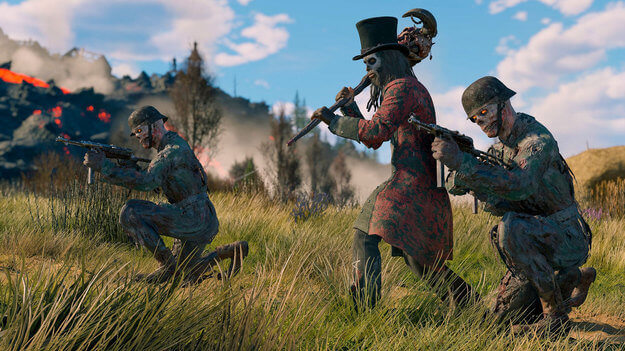 The battle royale has seen quite the rise in 2020. Whether it be the continuing dominance of Fortnite over the known universe, PUBG finally becoming a multiplatform, cross-play success, Fall Guys turning the genre on its head, Spellbreak bringing fantasy elements and erm, not much else and Call of Duty throwing all of its chips into Warzone, you’d be forgiven for thinking there probably wasn’t room for another player at this particular table. Yet in January came Cuisine Royale, a Royale that mixed up the formula by adding fantasy elements, zombies and ridiculous costumes.

Whilst it didn’t take off the same way as say, Fortnite or PUBG, it had a following that supported the little Royale that could, and now it’s back with a new name and erm, well, not much else. Rest in peace Cuisine Royale, long live CRSED: FOAD (Cuisine Royale Second Edition: Fulfillment of All Desires).

CRSED lands you on a typical royale island, including large open spaces and abandoned buildings full of joyful loot the snaffle up and use in your defence against literally everyone else. As with any royale it’s a slow build if you start in quiet places, but particularly in CRSED as I’ve never played a match with anymore than 35-odd players, making the map enormous, and very rarely will you run into players in the first five or six minutes of the game. The map features vehicles, so if you need to move to avoid the map decreasing in size there’s some easy enough getaways.

The ‘big map, less players’ aspect of CRSED allows for somewhat more tactical play, as instead of a bonkers free-for-all landing in hot spots that can knock you out in seconds (hey there, Lazy Lake), you’ll rarely feel panicked immediately, so moving into the safe zones forces you to slow your pace, as you have no real idea where anybody is. Crawling through the grass allows for methodical movement and stealth becomes a more obvious way of moving through locations. It’s terribly quiet. Until it isn’t.

What CRSED brings to the genre over the other players at this particular table is the mythical mechanics and supernatural powers. From the likes of zombie summoning (which, rather hilariously, has the undead following you around for a period having your back), invisibility, super speed or turning you into a beastly monster, the range on offer is certainly a fun twist on the usual fodder, and makes PUBG look decidedly dull in comparison.

The best way to play CRSED is just to let it happen. While the battle royale professional in you may want to keep it focused on your weaponry and allow you to move at your own pace, the reality is you’ll get left behind if you don’t steer into the skid of the supernatural elements. Whilst they’re temporary, a majority of them are way OP, so avoiding attacks with summoning creatures is your best bet if you have nothing to defend yourself.

What mystical summoning you can conjure is dependent on your character choice, and there’s quite the collection of Royale hunters to choose from, including a thunder god, a cowboy/girl, a shaman and purchasable packs such as a Metal Zombie (that looks awesome), a Biker Queen who looks like she’s been ripped directly from PUBG, a vicar with an AK and my personal favourite the Fire Dragon that wields Japanese swords and kicks all kinds of ass.

CRSED itself is a free download, and the aforementioned character packs range from £8 to £16, depending on what’s included. The more expensive packs include a good number of crowns you can use to buy in-game cosmetics, with crown packs starting at £7.99. Amazingly a little more expensive than the smallest V-Bucks pack, but there’s a fair amount you can put them towards.

I don’t begrudge a free game offering in-game purchases, despite others doing so. The CRSED collection of *things* is rather overwhelming at first, and the game certainly does a poor job of explaining anything to you. The shop is best avoided until you’ve had a few games under your belt and you know the lay of the land and what kind of characters you’re after, it all makes sense. Eventually. Kind of. It’s not really supposed to.

And that’s really the beauty of what CRSED is. It’s a Royale for those who crave that PUBG experience but with a bit more madness about it. It’s difficult to compare it to other Royales because it’s PUBG with smooth jazz and summonings. There doesn’t appear to be a lick of Fortnite or CoD here which some may find some relief in.

As a hardened player of both Warzone and Fortnite jumping into CRSED was a different kind of experience and whilst I’ve been playing it on and off throughout the year and since the games original release, this package feels like the a full product ready to go and that’s a real boom for those who are tired of the formulaic genre.

Cuisine Royale started as a pisstake of PUBG and now it feels like its weirder younger brother who sits in his room with the lights off and a ouija board, attempting to summon demons whilst PUBG is in the garden training for a Spec-Ops mission and not laughing at jokes.

CRSED: FOAD probably won’t ever see major numbers like at the very height of PUBG and its revamp may have just come a little too late for the masses to really be all that bothered, but it’s a fun quirky indie distraction from the mainstream support acts that looks better than ever before.

I can’t in good conscience recommend it over PUBG for that pure, authentic Royale scratch, but what it offers is enough to give it a blast.

Plus it’s also free to download, and you can’t say fairer than that.

Cuisine Royale returns leaner and with a shiny visual upgrade, though the authentic Royale experience is a little lost under the supernatural mechanics.