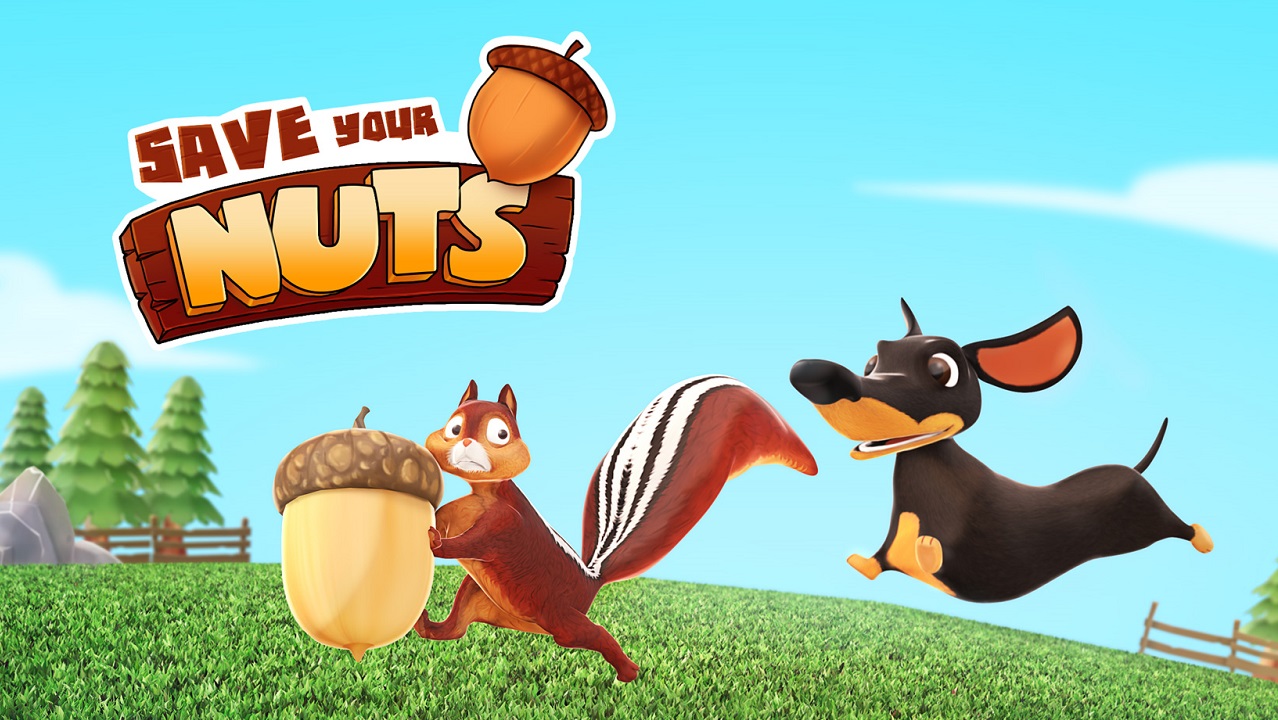 A frenetic party-game where you scramble for nuts in 4v4 arena battles, but a serious lack of content is all you'll find buried come winter. The Finger Guns Review.

I read a book once that said that squirrels hide hundreds of nuts in the ground, in trees, in boreholes, and in burrows all through the spring, far more than they eat, but they only have little brains, and so they only remember where about 50% of them are hidden. Come winter this means they often can’t find enough nuts of their own to survive. So what do they do? Well, they steal other squirrel’s nuts. That’s the only reason I’m starting this far off-topic. So a small part of the premise of this game makes a lot of sense.

You are a squirrel, or a number of other woodland animals including raccoons, beavers, wolves, armadillos and strangely a dachshund, and your job is to steal, sorry, save as many nuts as possible in a series of up to 8 player 4v4 nutty multiplayer modes. Three of the usual staples are here; Capture the flag, sorry, Capture the Nut, which is exactly what it says on the tin; Battle mode, which is a simple deathmatch, and Thieves.

Capture the Nut is where it’s at, a solid struggle to keep the upper hand as nuts are dropped into the centre of an arena and the first to five wins. You can jump, punch, lob the nut, or even dig for powerups, but you must get the nut back to your home kennel. Yes, kennel, I guess because of the dachshund. It is strikingly hard to keep possession of the nut for more than a few seconds as your competition bash, kick and otherwise thwart your simple journey to save that nut for winter. Rounds are fast and frenetic, and with mates it’s fun for a little while. Against bots, on single-player, it was very hard to keep hold of a nut for enough time to make a difference.

In Battle mode, things are a lot simpler. Each character has three balloons and each strike pops one. Three strikes and you’re out. You can win a round in seconds, or if you’re not careful, lose just as quickly. This is also the mode to streak through if you want to earn some new arenas, as a win just involves keeping out of the fight for two seconds and then bludgeoning whoever is left over with your full set of balloons. Feels like the strategy that would eventually win Takeshi’s Castle during the water-pistol dodgems game, but someone’s always after you.

Lastly, Thieves mode. This is essentially capture the nut again. The only real difference is that this time there are a finite five nuts and the game is a constant back and forth across the map trying to steal the nuts that the other team has already banked. This is fine across some of the larger arenas although it can get repetitive, but can become completely unworkable in the smaller areas. It can certainly make for a very mad five minutes though. The great bit about this mode is you can really dominate it with a bit of strategy. Some arenas have a lot of obstacles in them and making good use of those, such as when they KO your opponents and make them drop their nuts, leaving you free to swoop in and make an easy save, can give you a number of quick wins.

That’s the modes. That’s really it.

You start with three arenas; a backyard garden (the only place the kennels make sense), a park and a train station. Win some rounds and you can earn up to eight arenas including rocket launch pads, pirate ships, and an icy lake, and in the later ones things really start to move; trains can easily wipe-out a team, falls will take you out of the game for ten seconds, and you can get stuck on literally every little glitchy step or furniture edge. I ended up using these glitches to my advantage, getting the bots stuck under a picnic table, or at a certain point on some steps and then casually slam-dunking my nuts home.

Sorry I should explain; the last two arenas are a soccer field (football for us Brits) and a basketball court and they play a little different. Gone are the nuts, replaced by bouncing physics-defying balls, and gone are the kennels. Instead you need to score goals or baskets. Soccer is like top-down single-camera squirrel Rocket League, as ridiculous as that sounds, and with the same level of frustration, but ultimately this is probably the mode that most people would have fun with. I’m afraid its nowhere near as addictive as Rocket League though. Basketball is super tough on capture the nut mode; scoring baskets with the lob action is laughably impossible with some enemy squirrel trying to teabag you at the same time. The devs clearly realised this and added a curved stairway up to the basket, where you can drop off the top and score a slamdunk. This is the only way to score and even then it was rare to manage more than one basket per game.

No matter what arena or mode, it’s hard to see what on earth is happening in the scrum that sets in during every round. There is not much variety in the avatar colours if you are all squirrels for example, making keeping abreast of WTF is going on very tricky. I had to make myself a black squirrel to even have a hope of keeping track. Its easier if everyone is a different animal, but then clear biases start to be unearthed.

I noticed little difference in the actual strength of each animal, but speed was a big issue. Once you’re the one holding your nuts, you slow right down and having an already slow armadillo meant, no matter how often I got possession of the nut, I lost it again on my way back to the kennel hub. There isn’t much in the way of balance between the animal classes, and eventually everyone just gravitates back to a scrum of squirrels. It would have been better to see more overall balance to the different classes.

You can choose a new arena easily after every match, but really annoyingly for game-modes, you have to quit out to the main menu and start afresh. This means you end up needing the team menu over and over. This menu is strange; every other menu is navigated by pushing direction buttons to go from option to option, you know, like a normal menu, but the player/animal choice and bots menu is suddenly cursor-based, and because of this it’s slow and very fiddly with a thumb-stick. There seems to be no apparent reason for it, but it forces you to re-choose all your team animals, colours and bots all over again each time. Your mates are there on the couch, and everyone already chose what they wanted four times over. It’s just frustrating and slows down the fun considerably.

Overall, graphics are serviceable for what the game is. The animals look fun if a little polygon-sharp around the edges. Locations are cartoony in keeping with the theme. But you may want to skip the opening video that introduces the Nutlympics; the 2D animation here is horrific.

As a single-player experience, there is little to keep you playing past the first few rounds, but as a party game with some mates, there’s fun to be had. It’s not the epic that Rocket League is, it’s not the clever and skilled party game that Over-Cooked is, nor is it as memorable as many classic party games, like the Crash Bash, Mario Parties and Pokemon Stadium mini-games of old. But it does what it sets out to do, just with absolutely no embellishments or flair. There’s just very little to it and that lack of content is the main story here.

It’s natural selection at work. I’m a squirrel, I have a number of games to play, but I’m going to forget 50% of them the moment I stop playing. Save Your Nuts is probably going to be one of them.

Save Your Nuts is available now on Xbox One, Nintendo Switch and PC.