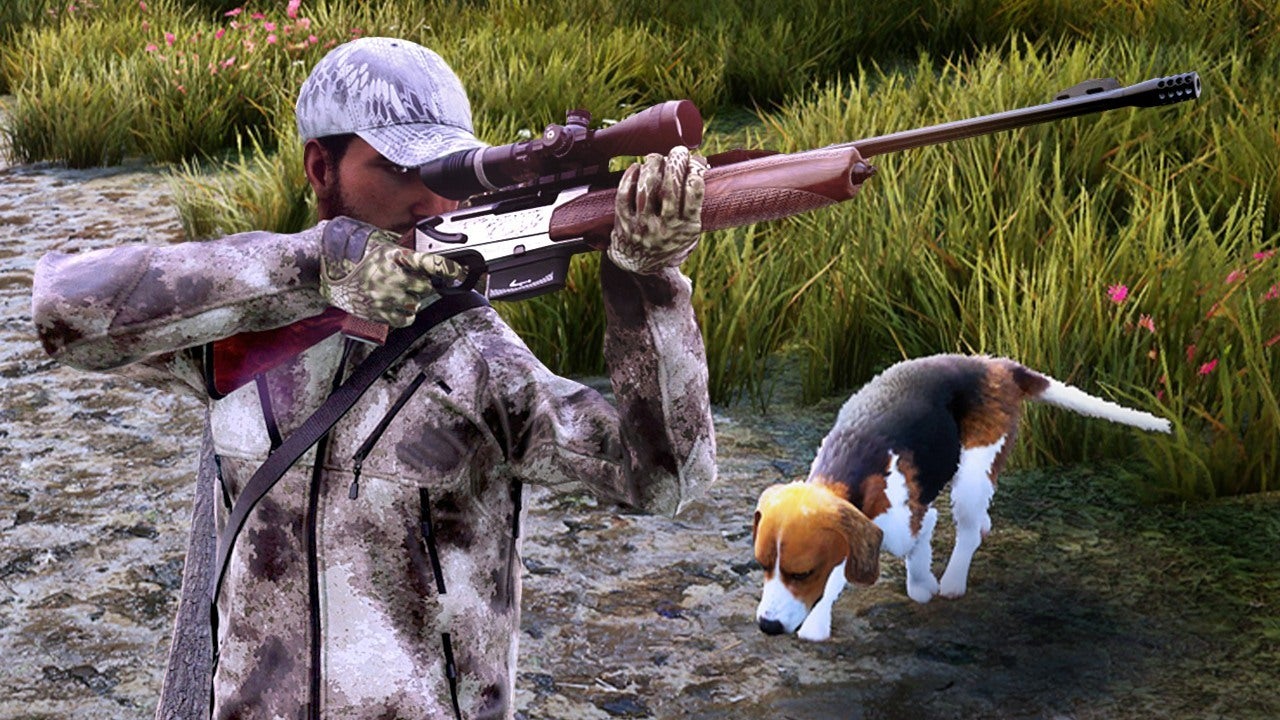 Hunting Simulator 2 replicates the 'fun' of hunting, right down to the boredom between firing your weapon. The Finger Guns Review.

Hunting games have never appealed to me. Despite ‘Divisiongate’ (In which I was accused of shooting a harmless Dog while playing The Division) I don’t like the killing of animals at all, even in video games – but here we have Hunting Simulator 2 to test my resolve. Is this the game that could change my mind?

As you might have guessed from the name, Hunting Simulator 2 is a first-person game that’s all about hunting. Shocker! It’s not just about point and shooting your gun however, it’s far more involved than that. There is tracking your pray, licenses, money, trophies, and more variety of guns than you know what to do with.

Let’s start from the beginning. Hunting Simulator 2 starts off with a tutorial that teaches you the basics and introduces you to your new best friend – A hunting beagle companion who will help you sniff out different wildlife and track them for you. The best part is that your beloved companion can be upgraded if you praise the dog during hunts. There are different breeds, ranging from said beagle to a Labrador or a German Shepard. All offer slightly different skill sets. These sidekicks are arguably the best part of the game, it’s just a little disturbing that you have to walk over to a skinned animal rug in your super swanky lodge to choose which dog you want to take on each hunt. They couldn’t just have had a kennel, could they?

Once you have the basics out of the way you’ll soon realise halfway through the tutorial that Hunting Simulator 2 does one thing very accurately. Captures the feeling of Hunting. But not in a good way. It portrays the sheer boredom of the ‘sport’ within the first five minutes.

There is no real story as such. You wake up, or in this case, just appear in a cabin with a voice-over telling you what to do. It’s just you, your gun and your trusty companion, and the wide-open countryside at your disposal. There are three open-world areas fo you do explore – Colorado, Texas, and Europe – each having two maps to explore. As you would imagine each of these areas, along with their beauty provide different sorts of animals for you to hunt.

To hunt these animals, it’s not simply a case of heading out into the wilderness and unloading a few rounds on an unsuspecting deer. You need licenses for each of the animals you hunt. These can be purchased from your cabin. In order to purchase new licenses, you will need to complete smaller hunts, and sell your ‘trophies’ to make some cash. This loop, in theory at least, should make the player want to go out and hunter bigger and more prize-worthy animals but in reality, its just such a darn slow slog. It’s hard to keep motivated. The In-game money isn’t just for buying licenses. As you can imagine there is a hell of a lot of weapons on offer too, from rifles to shotguns to the trusty bow. You will also need some cash to pay fines. Fines are issued if you take too many shots for example, or bizarrely for a game of this nature you get fined if you partake in unethical treatment of animals.

So far so good. The hunting mechanics are all there, the weapons are there, beautiful locations to explore and a friendly canine companion to keep you company. It’s all there. Unfortunately, it’s the moment to moment gameplay that lets the game down. First you find an animal to track, which can take literal hours of hunting around for the clues and tracks. This process is so dull, even with the help of your best bud beagle it’s tricky to find the very subtle paw prints, blood trail for even animal poo so you can get the hunt started. To make matter worse, these trails can fade over time. What makes this process so achingly dull is that the walking mechanics are just so so slow. Let’s put it this way, there is no change in speed from walking to crouching. You can run, but you have very limited stamina, which to be fair can be increased the more you run. This still doesn’t stem the boredom. Another example of the monotony of the game is when you get to shoot your prey. Unless you get the kill first time, it can sometimes bolt, leaving a trail and then you have to slowly walk up to then wander around the area where you last saw your prey and begin the slow process of finding a blood track to follow so you can finish off your kill. Once you have completed your hunt it’s time to pick up your animal and then begin the slow slow slog back to the cabin. It’s a painfully slow grind.

Slowness aside, The shooting mechanics are passable with the different weapons having their own strengths and weaknesses. It’s just a shame you spend more time walking than you do shooting. Still, there is the shooting range at your cabin if you really want to let off steam, including Skeet range. I guess that’s missing the point of hunting though. Hunting Simulator 2 sometimes feels like more of an arcade shooter than an out and out simulator. Other than perhaps testing the wind speed with some powder and adjusting your shot accordingly, there is not much else to think about. All you need is a single button to hold your breath and a steady aim.

Hunting Simulator is an odd one for me. I have never hunted and will never do so, so I can’t describe where this is accurate or not. If hunting is something you enjoy then there is something to be said for playing this game. It must be better to play this than go out to actually shoot real animals. Most of the issues I found during my time with Hunting Simulator 2 are due to the developer not quite knowing if they want a simulator or videogame. The really boring stuff like tracking is pretty well realized, and is as realistic as you are going to get. Yet the shooting is for the most part just point and shoot with no real strategy. Unfortunately, thanks to the utterly boring (and pointless) nature of hunting, interest in this game wanes pretty quickly.

So this game pretty much falls slap bang in the middle of two genres, the simulator, and the shooter. Hunting Simulator 2, doesn’t quite match up to the needs of what hardcore hunters would be after, yet it’s way too boring for those who prefer a casual shooter experience. So I’m not really sure who this game is targeted at. Hunting Simulator 2 does manage to capture the main essence of hunting, and offers a wide variety of weapons, and some added strategy with the need to weigh license purchase with having a trophy. But there is no escaping the utter boredom. If a slow paced beautiful walking simulator is your bag, with an added bit of shooting then you may find some enjoyment here.

One thing that I know for sure is that it seems a shame to ruin what could be a lovely walk in the wild with your trusty canine companion by shooting some animals.